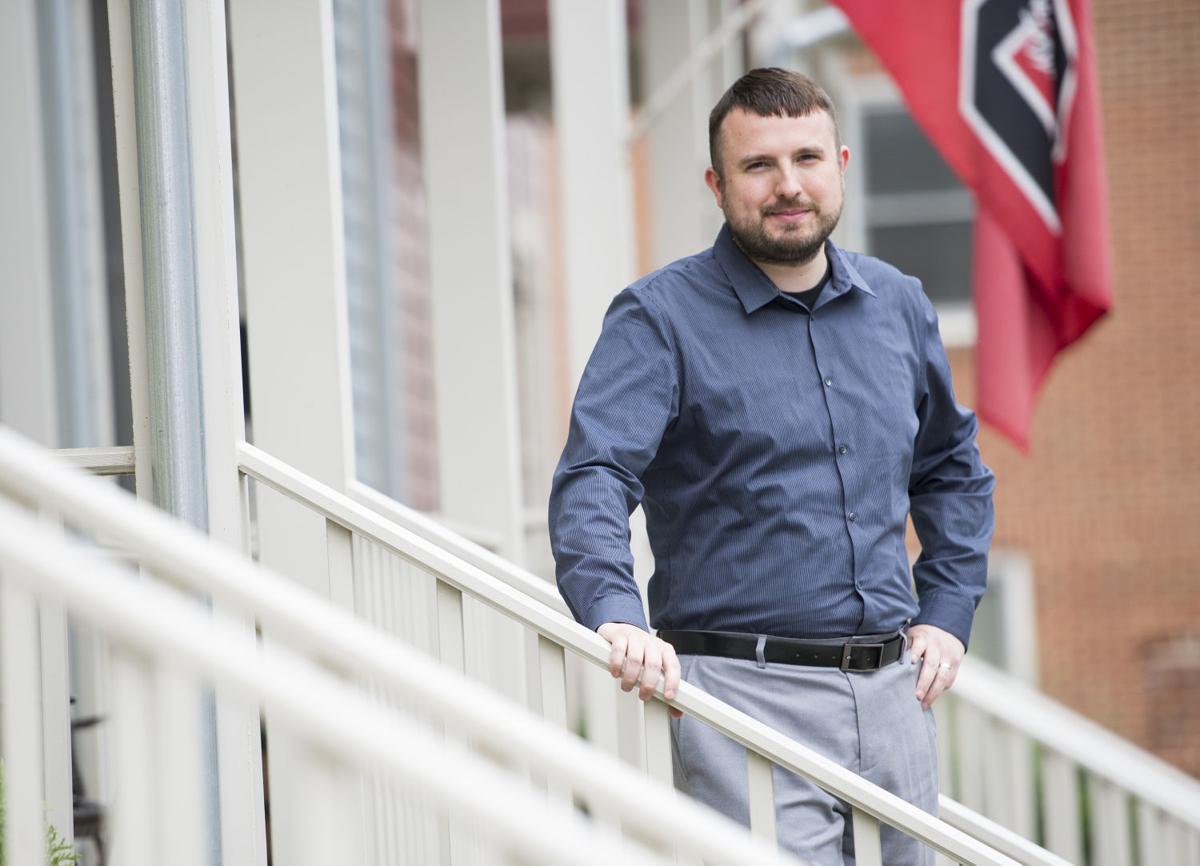 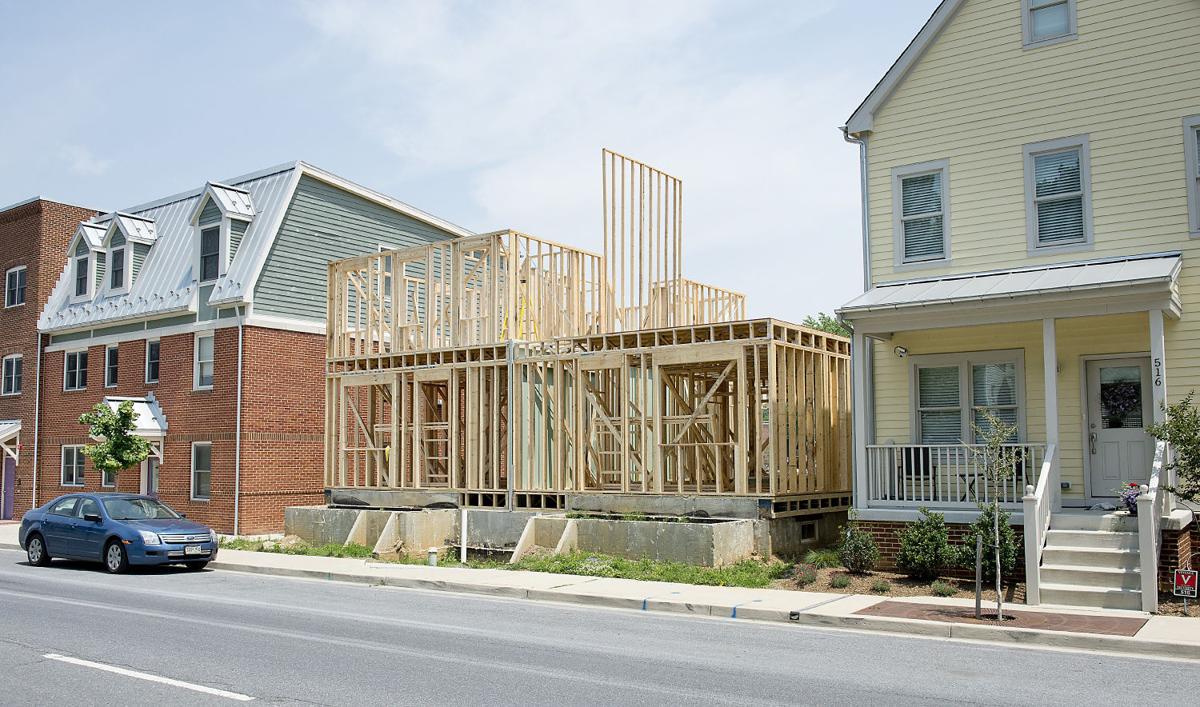 Construction continues on a home on North Bentz Street by the new developer of the North Pointe neighborhood, which faced numerous delays after the previous development group stopped construction amid a series of financial and legal problems.

Construction continues on a home on North Bentz Street by the new developer of the North Pointe neighborhood, which faced numerous delays after the previous development group stopped construction amid a series of financial and legal problems.

The sounds of knocking hammers and rumbling trucks have returned to the North Pointe development in Frederick.

After more than a year of silence, West Sixth Street residents Malcolm Furgol and Gudrun Hofmeister welcome the noise.

“It’s funny, because people usually complain about construction noise,” Furgol said. “For us, it was music to our ears to hear them working again.”

“Them” is Lancaster Craftsmen Builders, the Middletown company chosen by the Housing Authority for the City of Frederick to complete the development near Bentz and Seventh streets. The work is on 33 town houses and duplexes left half finished or not started after the former builder, Nexus EnergyHomes, stopped construction in 2013 amid financial issues and lawsuits from subcontractors and buyers.

The project began as one of several new housing authority developments funded through a $15.9 million Hope VI grant from the U.S. Department of Housing and Urban Development. Nexus signed on in 2010, thrusting the project into the national spotlight with plans to build the first zero net energy neighborhood in the country.

It was crowned the “Emerald City” for its innovative, energy-efficient design, winning Nexus the EnergyValue Housing Award for 2012 Builder of the Year and a mention in then-Gov. Martin O’Malley’s State of the State speech. Frederick natives and new residents jumped at the chance to buy a home in the innovative development; all but eight of the 50 homes had been sold by the end of 2013, according to a previous News-Post article.

Furgol and his wife, who then lived in Takoma Park, looked at several historic homes downtown before considering the duplex on West Sixth Street in North Pointe.

“We thought there’d be no chance we’d be able to afford a new home,” Furgol said.

But the $306,000 price wasn’t much more expensive than those of the historic homes, especially once the promised federal and state rebates were factored in, as well as the monthly electric savings from a home projected to produce as much energy as it used.

The plan to sell 12 of the 50 homes in the development to low-income residents was icing on the cake for Furgol, who works as community development director for United Way of Frederick County.

With the March 2012 purchase, Furgol and Hofmeister became the owners of a 1,440-square-foot duplex. With ample room to start a family, a community feel, and downtown Frederick just blocks away, their new home seemed like the perfect fit.

Even before Nexus stopped construction, before the lawsuits began flooding in and funds ran dry, Furgol said he could tell things had taken a wrong turn.

The concrete walkway and steps leading up to the front doors of his and his neighbors’ homes were beginning to crack and crumble less than a year after they’d been built. Although it was a minor problem, one Furgol attributed to poorly mixed concrete, residents never heard back after they alerted Nexus.

“Nothing was happening. ... That was the hint, the writing on the wall,” Furgol said.

Soon after, company leaders began talking about their financial troubles, the overdue bills and lawsuits stemming from the multiple projects they were building across the region, including North Pointe. And the project that had been expected to become Frederick’s crown jewel fell apart.

Construction stopped. Nexus defaulted on its contract, and lawsuits piled up as more homebuyers and the Consumer Protection Division of the Office of the Attorney General filed charges against the company and its owners. As of July 2014, the company owed $544,000 from 11 cases to company subcontractors and residents that had bought the unbuilt homes.

There are no buyers for the 33 homes Lancaster Craftsmen Builders is to complete. Mark Lancaster, president of the company, acknowledged the fallout with Nexus left many area residents shaken and wary about the project’s future.

“People want to make sure we’re for real,” he said. “We have to earn their confidence.”

The recently resumed sounds and sights of the construction will go a long way toward renewing people’s confidence and financial interest in the project, he said.

The company’s reputation and commitment to green design provide added reason for confidence, according to Kimberly Ashkenazi, the housing authority’s economic development manager.

“They’ve been to this rodeo before,” she said. “There’s really no question as to whether they’ll complete the homes.”

The innovative energy design that earned the development high praise before hasn’t changed. Furgol said he thought the homes would “sell themselves,” particularly once Lancaster finished its model home for prospective buyers to tour.

“It’s very hard for most buyers to buy off of plans,” Lancaster agreed.

Lancaster said he intends to reserve one of the first seven homes finished — three duplexes and a single-family residence — as a model. The others, ready by early fall, will be sold.

From there, the remaining 26 duplexes and town houses will be constructed in phases, with the exact schedule driven by market demand and sales, Lancaster said. As of late June, he reported the project was on track to finish within three years.

The development’s use of multiple designs and unit types extends what would otherwise be a shorter buildout, Lancaster said.

“This is not a cookie-cutter subdivision,” he said. “Almost every one, you have to treat as an individual unit.”

Obtaining the necessary construction approvals and permit renewals also proved complicated and lengthy, he said. Although the overall layout and design created by Nexus can’t be changed because they have already been approved, Lancaster submitted requests for minor modifications to floor plans, window heights and building materials.

Changes designed by Lancaster include laundry chutes to connect the upper floors to the basement, kitchen islands, wet bars and “no-maintenance” windows with aluminum-clad exteriors, which don’t require repainting.

Lancaster said such custom amenities are typically included in the company’s other developments and homes. Although the prices of the homes will not be set until they are ready for sale, Lancaster said the duplexes would likely start in the low to mid-$300,000s.

Considering these estimates, Furgol said he and his wife likely got the best price under Nexus.

Lancaster said his company cannot be responsible for addressing problems in the homes Nexus already built, but he has offered Furgol and other homeowners access to their subcontractor to remedy the crumbling concrete steps and other problems. Since the subcontractor will already be in the neighborhood to work on the undeveloped homes, it will likely charge less for these repairs, Lancaster said.

In the meantime, Furgol and his wife will continue to celebrate the early-morning construction, as well as frequent knocking on their doors as visitors stop by to inquire about the development.

“This is going to completely change this whole end of town,” Furgol said of the project. “[Once finished] it’s something Frederick can brag about.”

For details on North Pointe, including an interactive timeline on the development's history, visit fredericknewspost.com.

A new builder is taking over the defaulted North Pointe housing project in Frederick.

I used to be concerned about the fifteen million dollars of taxpayer money to tear down around 150 units in the old projects and move those folks to other subsidized housing, but I am impressed with the new neighborhood going up.

I would like to see the crime stats for the old neighborhood versus the new when it's finally built out.

Every time I drive through this neighborhood, I am impressed with the new homes an the overall appearance. I look forward to the finished product.

Lancaster Builders has a good reputation, let's hope they get this project done and everyone lives happily ever after.