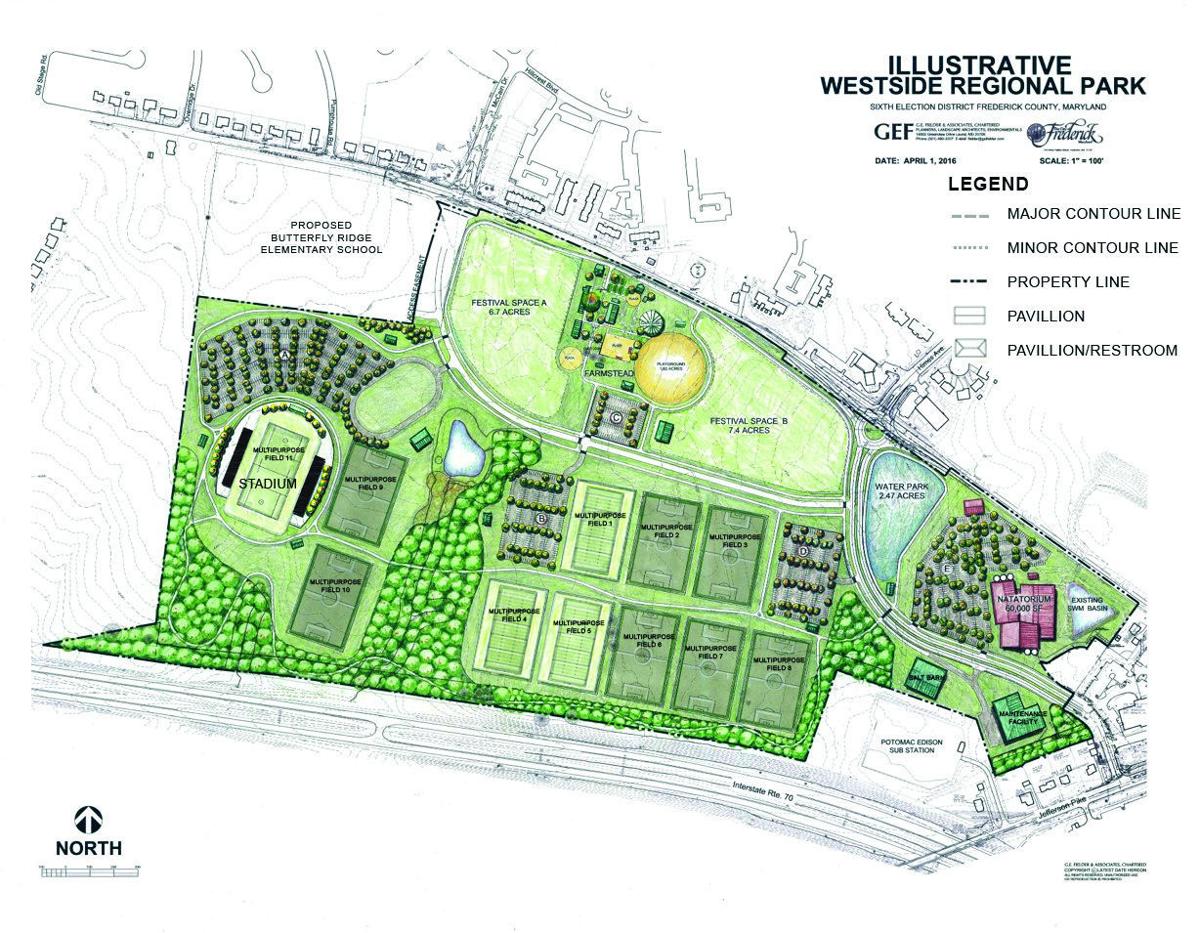 The plan for a regional park on Hargett Farm. The park is bordered on the south by Interstate 70 and to the east, Jefferson Pike.  The road to the north is Butterfly Lane. 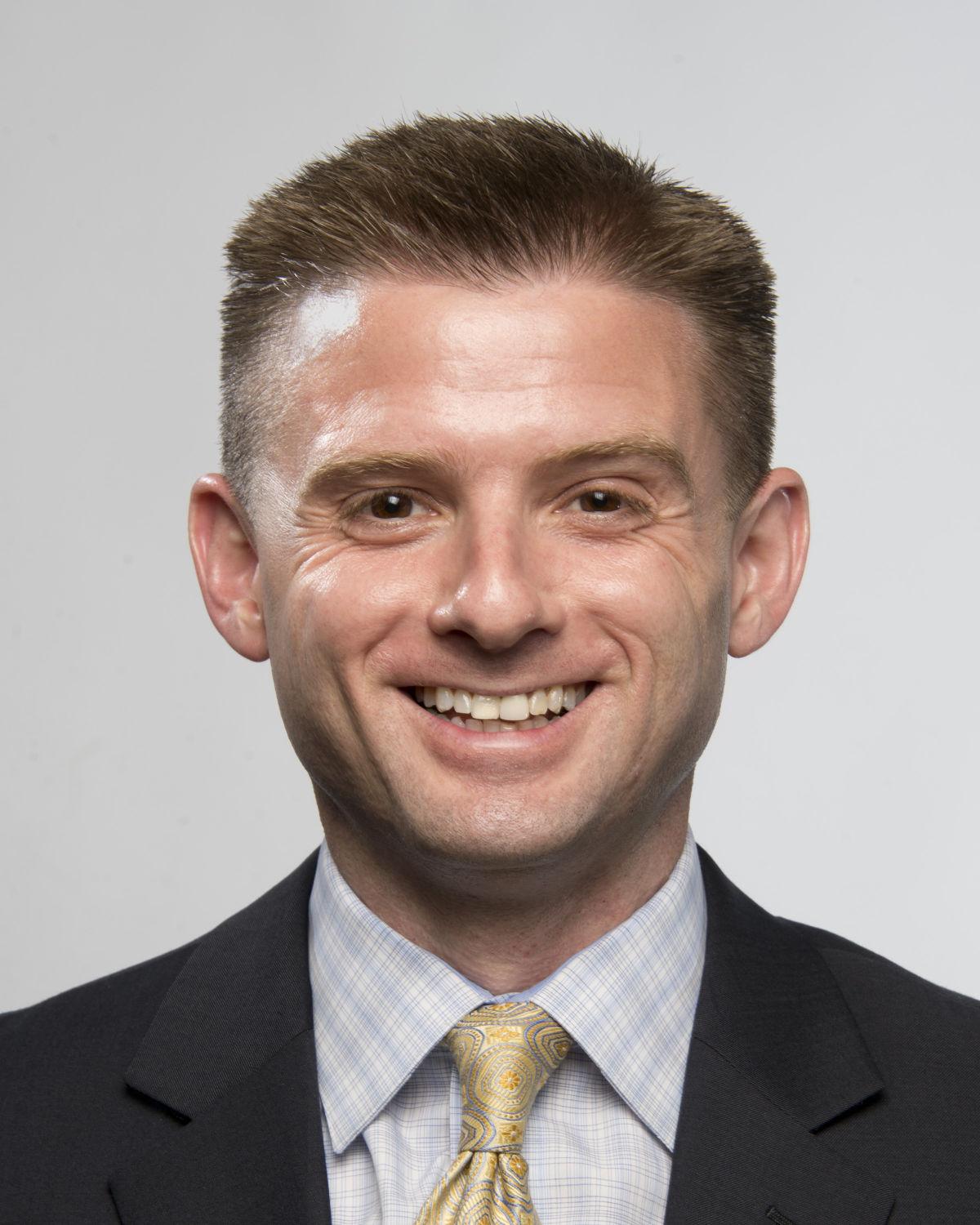 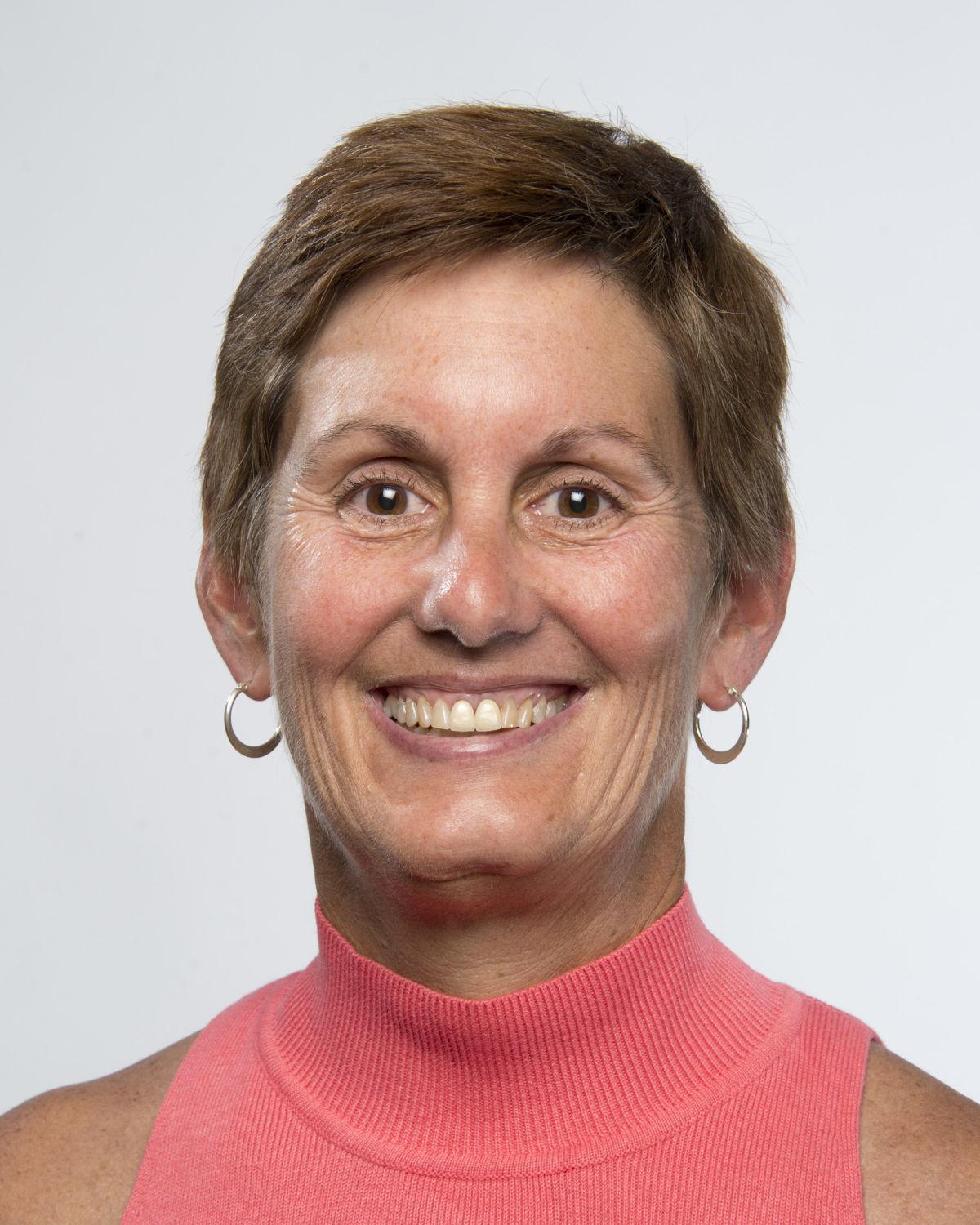 At $98.5 million, plans to build a regional park on Hargett Farm could be the most expensive city undertaking since the combined Carroll Creek flood control and linear park projects. Over a period of about four decades, the Carroll Creek project cost about $86 million, including the linear park and the aqueduct and levee system.

City-hired consultant G.E. Fielder & Associates of Laurel on Wednesday unveiled a master plan, including capital construction cost estimates, for the 136-acre, city-owned farm on Butterfly Lane. The proposal calls for a sports complex with multi-use fields and a stadium, a water park, an indoor swimming center, festival grounds and associated park facilities.

The plan represents the culmination of the six-month, $247,784 contract with G.E. Fielder & Associates, a planning and landscape architecture firm, to study and submit a proposal for transforming the undeveloped farmland into a regional park.

Wednesday’s presentation marked the first time that Mayor Randy McClement and the Board of Aldermen heard estimates for project construction and operating costs in a public forum. The Board of Aldermen will vote on whether to adopt the plan at a later public hearing.

The master plan report breaks down the project into four main sections, each of which corresponds to a different section of the property:

The 400-plus-page document also has a detailed archaeological review, site history, economic analysis, traffic studies and illustrative renderings for each of the project components.

The $98.5 million estimate reflects construction costs for all components, except for a possible set of solar panels for power generation and relocation of the eastern end of Butterfly Lane, according to the report.

The realignment, intended to increase road capacity and ease congestion around Md. 180, is expected to cost about $2.8 million, The Frederick News-Post has reported.

The master plan offered options for a multi-phase buildout, starting with the festival grounds, which require the lowest amount of upfront funding, and ending with the sports fields. Grace Fielder, the firm’s president and founder, estimated that construction would take at least 10 years under any multi-phased approach.

Once completed, the park could generate up to $2.79 million in yearly revenue through membership, rental and admissions fees associated with project components such as the water park, natatorium, festival grounds and sports complex, the report stated. However, the $3.33 million estimated yearly operating expenses associated with maintaining the facilities would result in a net loss of $527,000 per year.

Although the report includes estimates for the city’s annual debt service on construction and maintenance costs, the aldermen emphasized that the city will not shoulder the costs.

Instead, they pointed to the need for project partners — public and private organizations that may benefit from one or all of the planned facilities — as essential to project funding.

The city was previously restricted from using private partnerships to finance park development, but that restriction was eliminated under a bond re-funding approved this year.

“The viability of the park is in having partners,” Alderman Josh Bokee said. “The burden to develop this is ... not on city taxpayers alone.”

Alderwoman Kelly Russell noted that the city still pays more than $1 million in debt service on the cost to buy the land, purchased in 2009 for $18 million.

The need for partners may determine the order in which certain project components are constructed, she said.

“We can say we want to build the festival grounds and fields last, but if an investor comes in and says, ‘We want to build all these fields,’ that’s what we’re going to do,” she said.

As for the annual operating deficit, Alderman Michael O’Connor said he was not “overly concerned,” given that the city pays to operate other public parks that take in more money than they cost to operate.

Given the costly and detailed nature of the project, he proposed creating a standing committee to guide the project, similar to the group appointed to help oversee the Carroll Creek flood control project.

“They become our citizen consultants on all aspects of the project moving forward,” he said, naming neighborhood residents and those with expertise in project management as some of the potential members of the proposed committee.

Other aldermen indicated support for his idea, although McClement has the final say on whether to create a committee.

Until then, they will continue to develop strategies on how to attract partners to help fund the project.

Water park: 2.51 acres at Himes Avenue and Butterfly Lane designed with a natural theme such as a forest or a field with cornstalks.

From a water park to a 4,000-seat stadium, swimming pools and 11 multi-use fields, the initial master plans for a regional park at Hargett Far…

Time to clear the house at City Hall, none of these Aldermen will get my vote for Mayor. Especially not the ones most likely to run fro it.

Public Servants in charge of doing the math would bankrupt any private business. Public employees thrive on incompetence. The city can use the park for employee appreciation days while we the people are the butt of their joke.

The elected officials of the City of Frederick seems a little too quick to spend other people's (the taxpayer's) money. How about focusing on basic services instead of Taj Majal projects like the downtown hotel and now this boondoggle.

why aren't the developers paying for this? Once again, the taxpayers are funding corporate welfare.

I guess the headline writer was shocked by the cost. No one quoted in the article was.

Let's take the $100 million Gov Hogan has slated for another "I-270 Study" and build a state run park. The city can donate the land and reap the economic benefits without the tax burden.

Richard, don't forget the cost of the police who will have to patrol!

$527K yearly loss is a great price to make Middletown so happy.

What a total waste of money!!!They need to fix the city streets and roads around Frederick city and put this money to good use this is just a total waste of money and our taxes will be paying for this in the long run you best believe that and most people will not even go to this park since its out on and close to RT 40 Hillcrest area. Who in the world wants to go out to Hillcrest?
I don't know what the City is thinking about sure not the taxpayers that's for sure.
No one wants this or needs this kind of park. Sell the property!!!

Yet another public/private boondoggle; wonder if the taxpayers have ever been asked if they wanted to spend millions on this property and will they be asked if this "investment" makes sense....

As usual things done at City Hall start with a study. This study costing $247,00.00. The hotel convention center idea is a loser, and now making a park with the Hargett Farm.is another loser. Nobody seems to know what the final cost is for the hotel/convention is???? It seems like the only City Hall wants to do is spend money. Sell the Hargett Farm and the golf course ASAP.

Fantastic! This will add value to our community. The kids will love it. We won't have to travel to neighboring counties for recreational activities.

Maybe this is where the 100% (or more) parking rate increase downtown is going.

The city needs to sell this property. They can't run a golf course properly and cannot sell a grocery store, so I'm sure this would get screwed up also.

The tax outlay for this as well as that hotel downtown is beyond the pale. No wonder Maryland taxes (with the piggyback tax making it worse) are among the highest in the nation. Putting out money for this, the hotel downtown, all that money that Hogan wants to give away for suggestions on 270, salaries for translators in MoCo for students who don't know English, has gotten too much for what money we do get as income and for things that many of us will not even use nor benefit from in any way. There are so many issues in connection with this proposed park that have been well commented upon in previous posts.