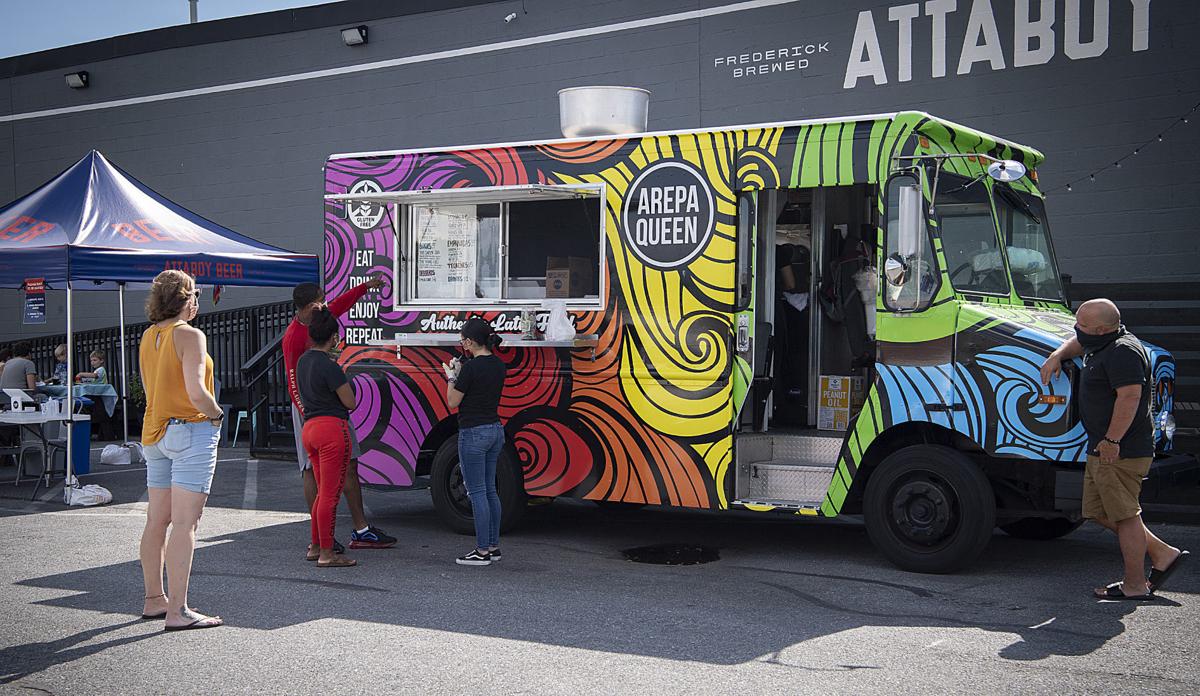 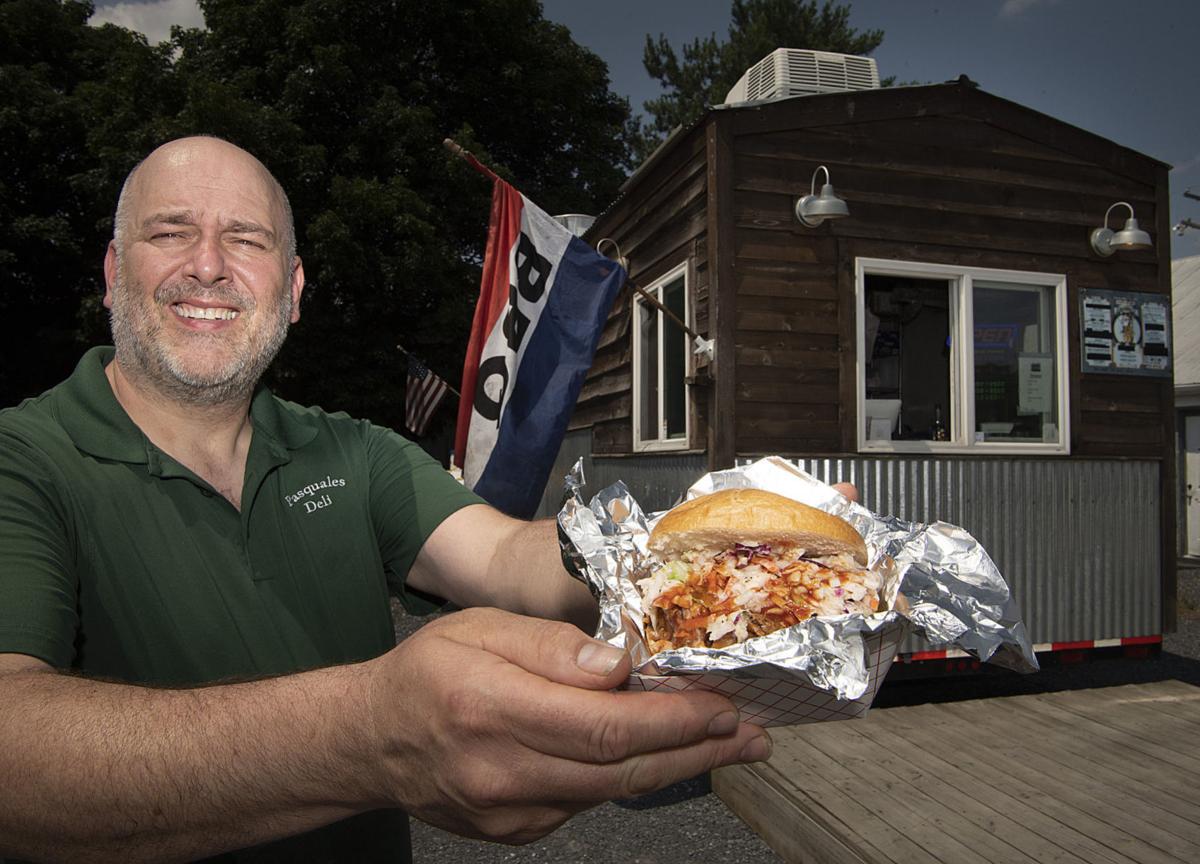 Summer is usually a time of prosperity for food trucks. Outdoor events like festivals give them a chance to open up for hundreds, if not thousands, of hungry attendees.

But the cancellation of most large events this summer has left food trucks without their big hitters.

Boxcar Burgers owner Brett Novick said the truck sells at least double at those events what they would on a normal day in a brewery parking lot or farmers market.

“So we're definitely seeing a slight decline in gross sales because that stuff is gone,” Novick said. “... The breweries are good but they’re not like that.”

Craft breweries are one of the only places food trucks can park in Frederick city, in addition to distilleries and wineries. “Primary site user permits,” which were first granted in 2017, allow these businesses to host food trucks. Originally, it was intended as a way for craft beverage businesses to compete with local restaurants, according to previous reporting from the Frederick News-Post.

Gabrielle Collard, manager of current planning for the city, said the zoning was also a way to protect already established businesses.

"The intent of prohibiting vendors and peddlers in commercial zoning districts was to prevent competition with brick-and-mortar establishments," she wrote in an email.

Besides craft beverage businesses, the MARC Station, and Carroll Creek Park, the only place food trucks can park within city limits is residential zones, for two hours maximum.

"At the time, this was done to ensure certain residential areas are not overrun with food trucks long term," Ashley Waters, communications manager for the city of Frederick, wrote in an email.

It’s less than appealing for food truck owners, who often rely on foot traffic. It feels like trucks have to rely on other businesses in order to survive, said Andrew Wilkinson, owner of Pizza Llama.

Wilkinson started a petition to the Board of Aldermen to make changes to the permitting process for food trucks in Frederick. His proposed changes would allow more businesses to be eligible for the primary use site permits, including churches and religious centers, retail establishments, gas stations and private property.

It would also allow trucks to park in commercial and industrial zones, and extend the maximum time from two hours to four.

Wilkinson used to set up at Jug Bridge Brewery, but the landlord removed him after he took a stand against serving police officers in uniform. Since then, many wineries and breweries have “blacklisted him,” he said.

The residential area rule, he said, only works well for ice cream trucks, not full-service trucks that make their food on-site.

Jorge Ramos, owner of the newly-opened truck Arepa Queen, said finding parking in Frederick can be difficult, especially if a truck isn’t in with the breweries. Novick said most breweries already have their food truck schedules filled up to six months out.

Luckily, Arepa Queen had a good start, even during the pandemic, by parking in its own neighborhood. Ramos and his wife, Gabriella Ramos, set up in the Jefferson Commons Way neighborhood with the approval of their HOA.

They planned on making debuts at large events like the Frederick Food Truck Festival, but that has been canceled.

“We were booked for three events, which all have been canceled, which we were kind of scared about in the beginning because we were just starting and those were just kind of like guaranteed locations,” Ramos said.

Once word-of-mouth and mentions on social media took off, Arepa Queen was invited to have a regular schedule with Attaboy Beer and Jug Bridge Brewery. Now, their weekends are booked out until August.

“We have gotten lots of good partnerships with [the breweries], but I think also the availability to park in other areas that are not with breweries, even near Baker Park where there's a lot of foot traffic, would kind of help add options,” he said. “Especially right now, if you try to book something with a brewery, with the amount of trucks, a lot of their dates are booked.”

Novick sees a lot of potential in opening commercial and industrial zones to food trucks. Areas that might have lots of offices could benefit from a nearby lunch option that wouldn’t require employees to drive out of the parking lot. He already does so in greater Frederick County, which allows food trucks to park in these zones.

“If it's private property and the owner wants us there, I don't really see why the city should favor a different kind of business,” Novick said. “We both create jobs, we both spend money in the local economy, and if people want to eat at food trucks, I don't really see where it's the city government’s role to put prohibitive measures in place to keep us out.”

Patrick Maggi, owner of Blue’s BBQ, has mixed feelings about changing the primary use site permits.

“It's a lot harder to run a restaurant than it is to run a food truck, and the margins are a lot slimmer with brick-and-mortars,” Maggi, who also owns a pizzeria in Damascus, said. “So I wouldn't take my food truck and park it outside of a restaurant. It's just not really good business for me.”

He can see commercial and industrial zones being more successful, but said the owners would have to coordinate with the food trucks so only a certain number show up at a time.

On whether the city was working on a plan to benefit food trucks, Waters wrote, "The City is working to continue to address the impacts of COVID-19 in the community, including food trucks. We hope to have something soon that would expand our pop up dining efforts to include food truck options."

Novick began thinking during the pandemic that it might be easier to have two brick-and-mortar locations for Boxcar Burgers than it is to have his current set-up, which is a permanent location in Brunswick and a traveling food truck.

When the pandemic started, Novick began calling breweries to try to find somewhere to park, while planning an online ordering system and safety guidelines.

Idiom Brewing allowed Boxcar to park in their lot, and they didn’t move for three months. Not having to pack up at the end of every night was nice, Novick said.

But at the same time, he saw its advantages. Food trucks are take-out businesses by design.

“This has obviously been a very, very strange and challenging time, but one of the things that I think food trucks are inherently good at is pivoting,” he said. “I mean literally the business is on wheels. We can go where we need to, we can adjust as we need to.”

I definitely think the city should expand the time and places that food trucks can operate. I don't always want to go to a bar or brewery- especially in the time of COVID. Also, personally, I support Pizza Llama's decision. They have a minority staff and young clientele who are often targets of overzealous police forces and uniforms make them all feel uncomfortable. I can relate. All of you complaining absolutely have a right not to patronize whatever business you don't support- but Pizza Llama has great food and they do have swift business from people that love them. They aren't going under because a few of you don't agree with their stance against serving uniformed police officers. I wish people would lay off the business on Facebook-- it reflects poorly on the citizens more than the business. You spout that you support cops, but then make yourselves (and in turn our community) look like total jerks when you troll their Facebook page. Don't shop there, easy. Don't troll them either, easy. If you want to set a good example for being pro-police, you aren't doing any favors freaking out on Facebook or these comment pages either [thumbup] Why don't you work with the police to help repair the damaged relationship they have with these minority communities which made Pizza Llama take this stance to begin with?! Help uniformed police set up a free ice cream truck or something, it doesn't solve police brutality, but it could go some way to repair trust in the community? Just a thought. *peace*

I think it would be really cool if our HOA had a food truck night. Get a bunch of different trucks, provide variety, park on the main road (which is wider) during a predefined time. No cooking that night [thumbup][beam]

Ours does. One resident arranged it all and once a week two or three trucks show up for a few hours. She even convinced a farmer stand to start. Not sure of your covenants, but I can't see the HOA not allowing this.

Actually, our HOA does. Just one truck on Sundays by the pool house. The trucks change every week. The line is looooong.

Mr. Wilkinson has the 1st Amendment right to speak his mind. However, exercising that right does not shield him from the consequences of doing so. If he will not serve police officers, as he has publicly stated in this newspaper, people can then decide whether they wish to support such a bigoted business owner. The same goes for establishments that refuse to give him a spot in their lot. I will actively seek out the other food trucks, and never go to his.

More whining by Wilkinson after he took his position of not serving law enforcement officers in uniform. Boo hoo hoo.

I hope his business folds. And it seems a lot of others do too.