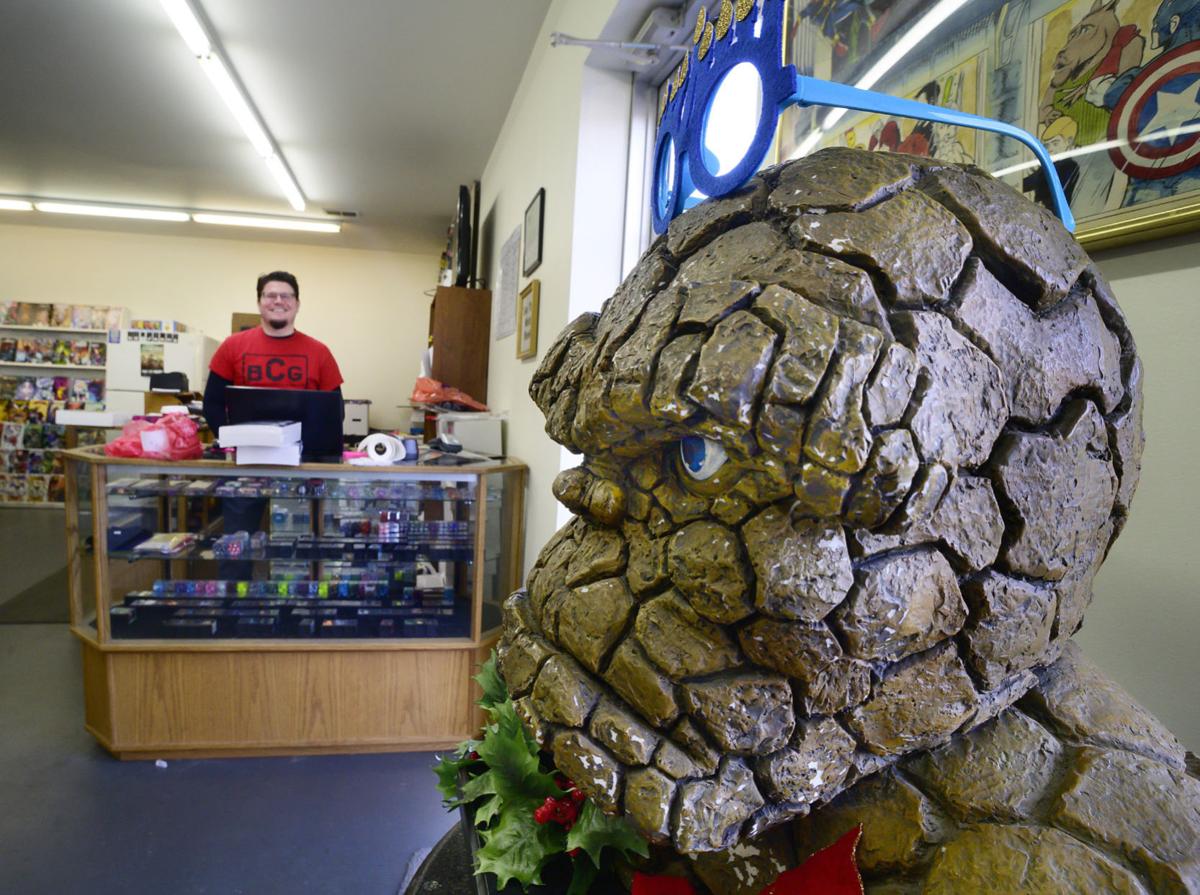 Thing, from the Marvel comic The Fantastic Four, guards the door Wednesday of Brainstorm Comics & Gaming’s second location at 25 Maple Ave. in Walkersville. In the background is owner John Frazier. 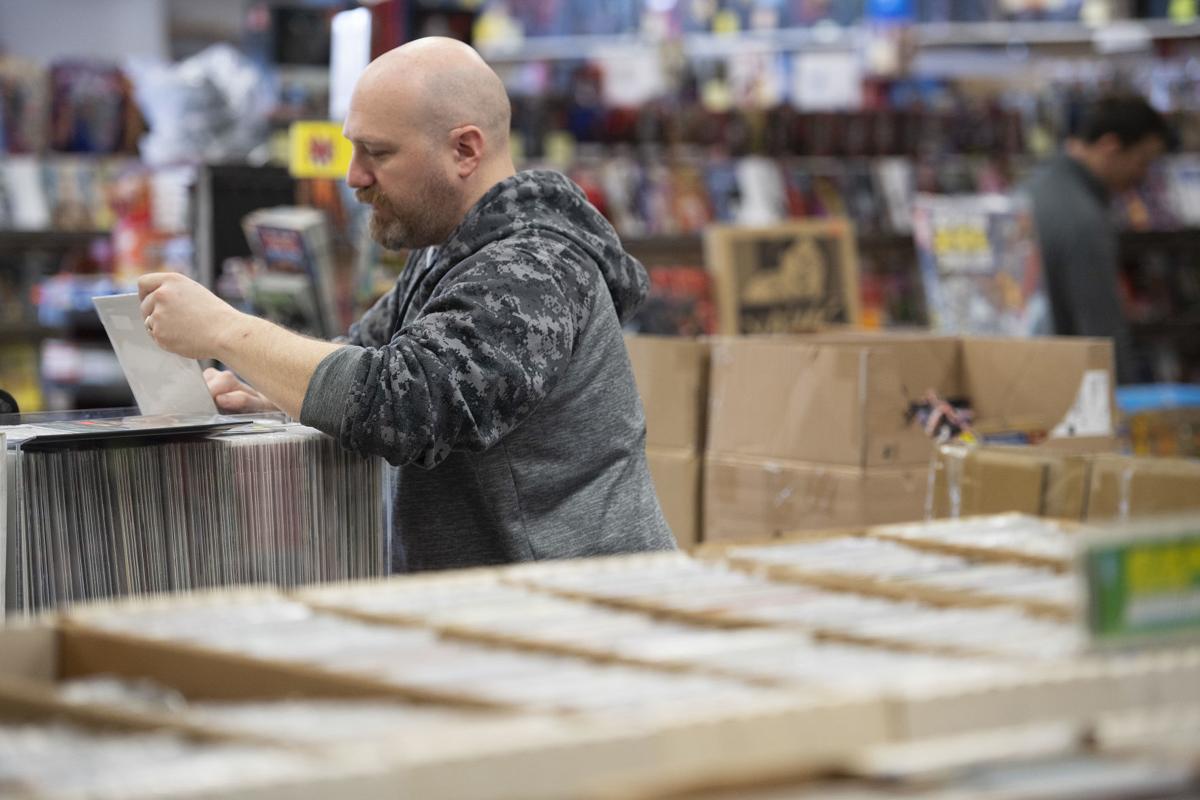 Chris Bartsch, of New Market, thumbs through comic books at a recent visit to Beyond Comics on Buckeystown Pike. 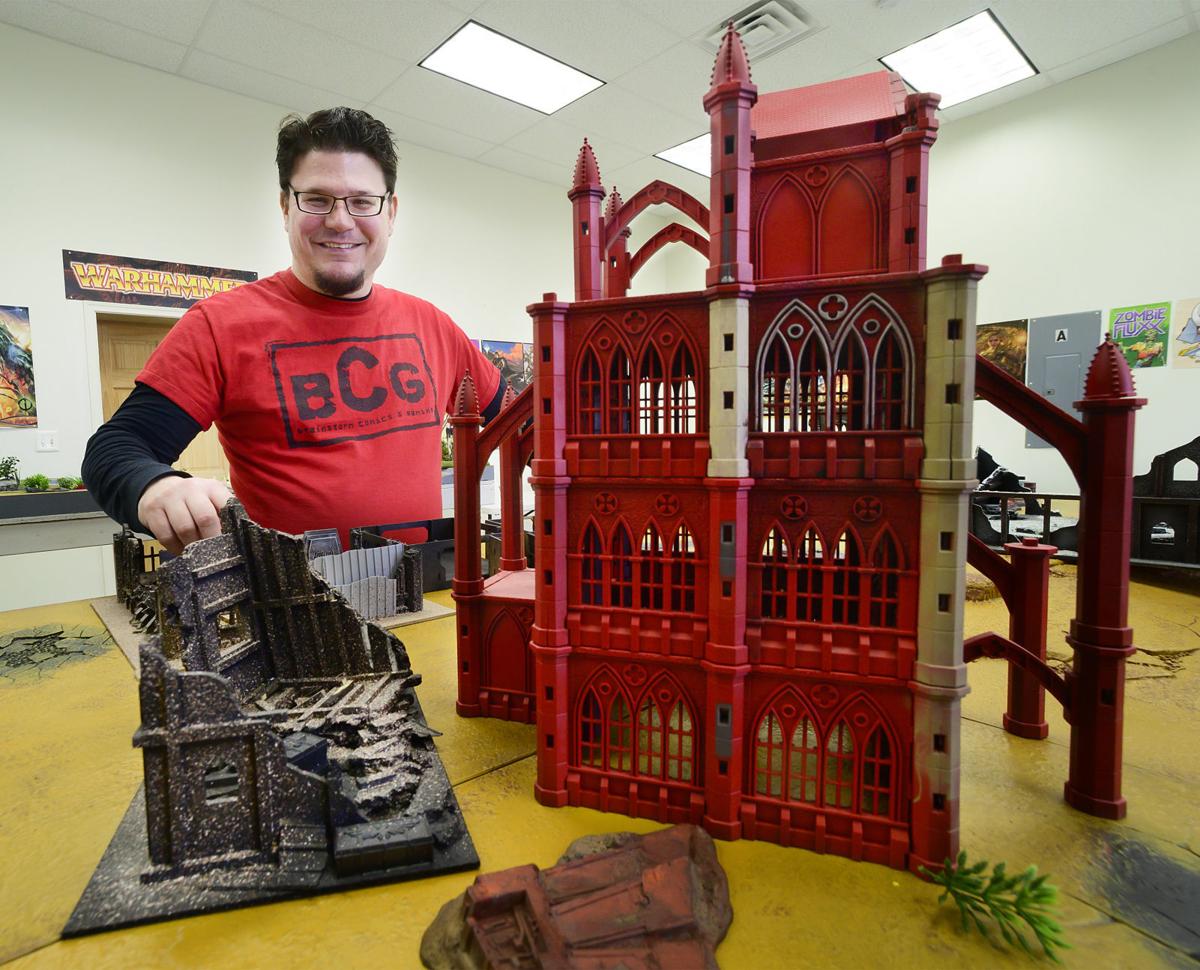 John Frazier, owner of Brainstorm Comics & Gaming, is shown Wednesday in the gaming room of the store’s second location at 25 Maple Ave. in Walkersville. 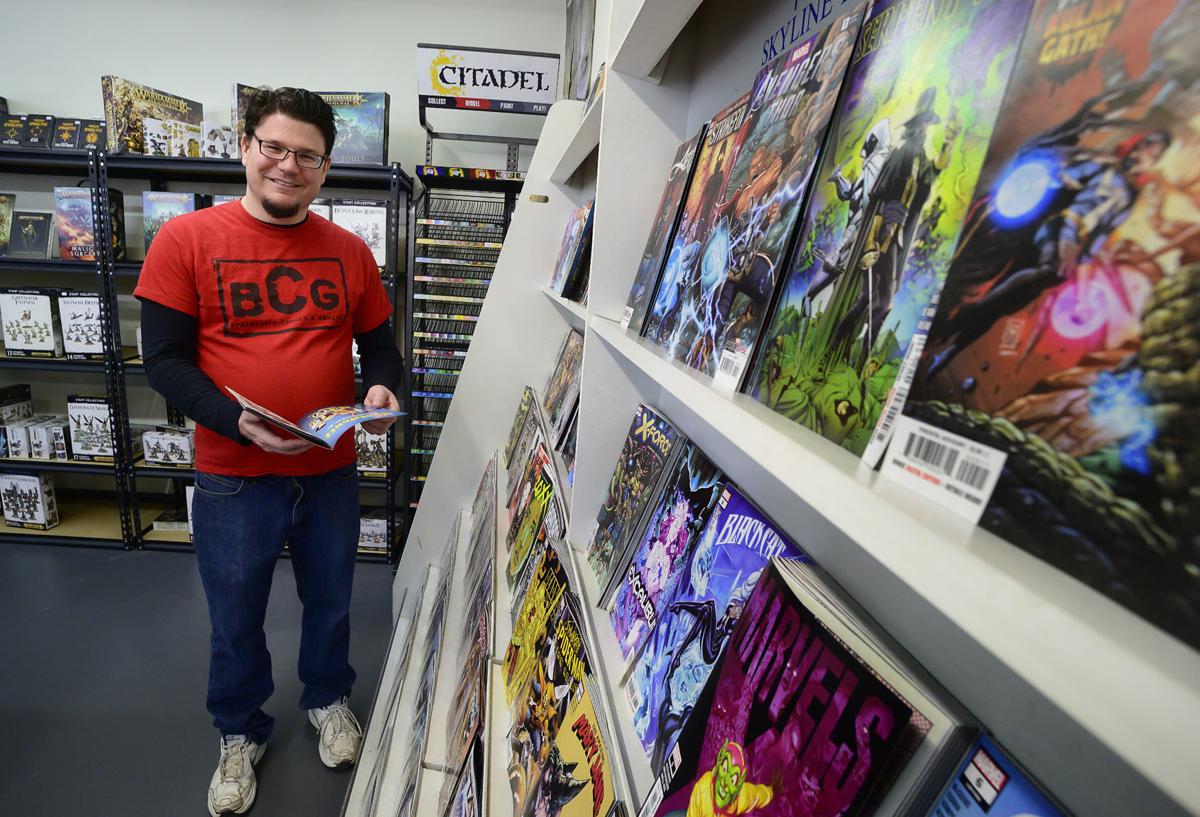 John Frazier, owner of Brainstorm Comics & Gaming, is shown Wednesday at the new comics rack in the store’s second location at 25 Maple Avenue in Walkersville. Between 70 and 100 new comics arrive on a weekly basis. 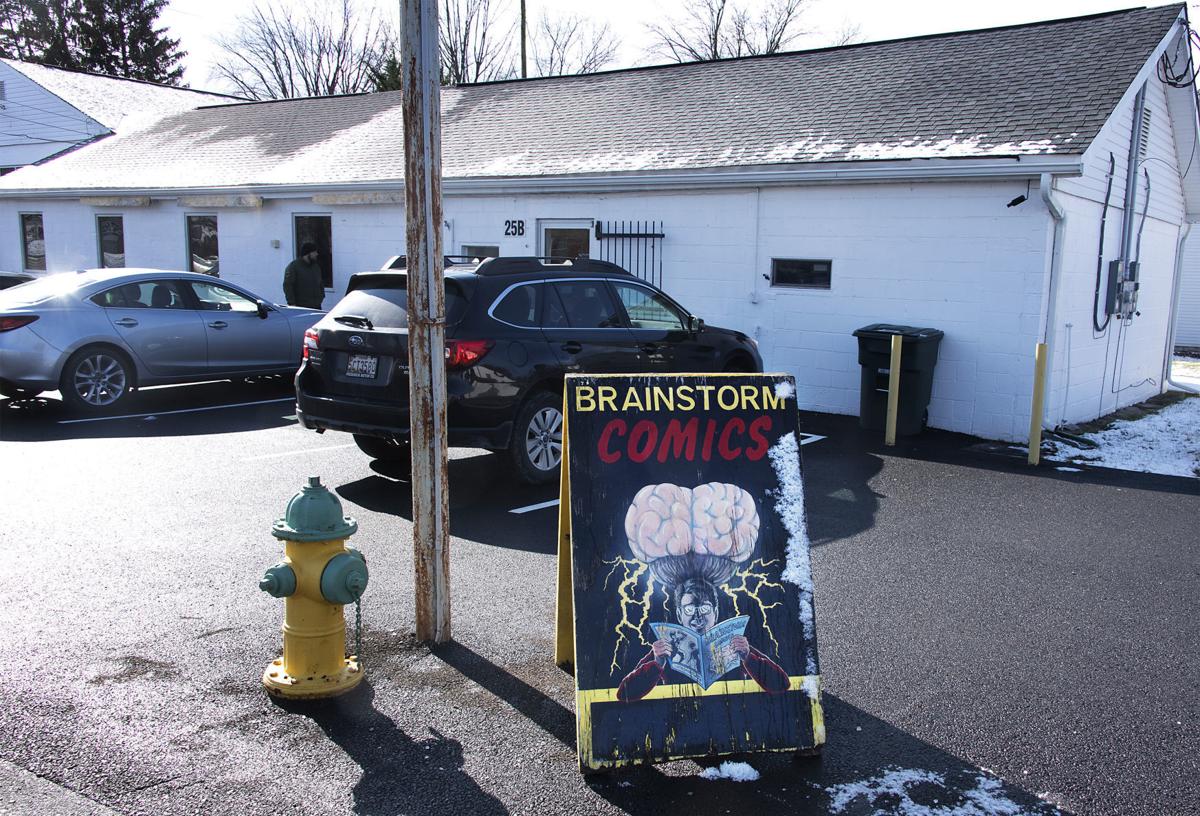 Superheroes, once confined to comic books, broke into mainstream pop culture over the last decade. T-shirts emblazoned with their images and logos fly off the shelves of major retailers. Superhero movies smash record after record. And TV shows entertain millions weekly.

That popularity hasn’t quite found its way back to where it all started, though: the local comic book stores.

But that didn’t stop John Frazier from expanding his business, Brainstorm Comics & Gaming, to a second location in Walkersville late last year, joining their first store on North Market Street in Frederick.

“If you’re saying it’s a sinking ship, why would anyone want to get on?” Frazier said.

It’s Frazier’s love of comics and his belief in the industry that keeps him going, and willing to make bold choices like expanding his business.

The new location has an emphasis on back issues — older issues that date back as far as the 1960s — and board games. Frazier has seen continuous growth in the business since he bought it five years ago.

Still, as in any other business, there are challenges.

One of the biggest challenges is the same one many small businesses are facing: Amazon and other online retailers.

Jon Cohen, owner of Beyond Comics in Frederick and Gaithersburg, said that many people come in to look at products they want, and then immediately try to find them cheaper on the internet.

“We do a lot to compete, but people are so in tune about saving an extra penny, so the retail stores try not to be jaded,” Cohen said. “Because all we get in our face is, ‘Do you discount this, what’s this, will you match that?’ We’re paying thousands and thousands in local costs just to be open. … That’s our biggest fight.”

Frazier agrees that many people are looking to get a better deal. He tries to persuade customers who might turn to e-commerce to see the benefits of shopping at a local store.

Much like the retail industry has seen with new experiential businesses, these comic shops are relying on building a community and an experience you can’t get on Amazon.

“Once you explain to people, OK, can you go and knock on Amazon’s door and say, ‘Hey, I’m here to play [Dungeons and Dragons],’ the answer is no,” Frazier said. “There’s no community to Amazon. It’s just cheaper prices. So there’s no loyalty necessarily to the company. It’s just loyalty to the price.”

The age of superhero movies

In the last few years, superhero movies have blown through every record possible. Last year, “Avengers: Endgame” became the highest-grossing film of all time.

Superheroes have successfully made their way into the worldwide pop culture mainstream.

For Beyond Comics, superheroes are more accepted, but the movies have also diminished the need to read a comic book.

“And if so, they’re not going to walk in and say, ‘I need an Iron Man comic,’” Cohen said. “I just saw the movie, so why do I need to read the comic book?”

Cohen says that people do come into the shop looking for a comic similar to the movies. Some movies borrow heavily from a comic’s storyline — such as the last Avengers movies, which were based on the Infinity Gauntlet storyline. That graphic novel was Cohen’s most popular book of 2019.

But other books are a harder sell, he said, because they don’t directly correlate to a movie. For example, Spider-Man has hundreds of comics in the original title and then numerous spinoffs, none of which, Cohen said, directly correlates to one of the movies’ storylines.

“I can’t give you this great concise starting point or anything like that, except in a graphic novel, and then it might not be the current version they’re doing in the movie,” Cohen said.

He said he has an easier time selling customers on limited series or graphic novels that have recently been adapted for the screen. “Watchmen” saw a great boon in sales after the HBO series debuted last year — and it’s already one of the highest-selling graphic novels ever.

Frazier sees the movies and TV shows as another way that new customers might get involved in buying comics. Instead of trying to find an exact match, he asks the customer questions.

“Did you like the relationship aspect of it, did you like the villain, what aspect of the movie spoke to you most?” Frazier said as an example. “And then I try to think of a graphic novel or a storyline that encapsulated that feeling, not necessarily the storyline.”

He never wants to ostracize people who come in after watching a movie or TV show, because he too felt ostracized by the comics community after he became interested in comics during the “Death of Superman” storyline in 1992. Frazier felt like he wasn’t being taken seriously because he was getting into the hobby during a peak pop culture moment. He said some stores alienate people who get into comics after watching the movies in the same way.

“I emphasize with my employees, they are real collectors, they got into it through a different medium, but they’re interested in those same characters and everything,” Frazier said. “So if you help them find the right story and the right creator, you can definitely cultivate them into being a regular.”

Cohen estimates that between 20 and 30 percent of his sales are from board games. When he first got into the business 30 years ago, gaming wasn’t nearly as big in comic shops as it is now.

Frazier, too, has increased the amount of games he sells at each location.

Both locations have implemented regular gaming nights to bring a sense of community to their stores. A staple at both is Magic: The Gathering, a card game with a cult following.

While many other game nights for tabletop games are free, Magic tournaments also give shops a chance to make more of a profit. Some styles of tournaments require players to buy one to several new packs in order to play.

“If we do a sealed tournament, you’re buying packs to make your deck,” Cohen said. “But you own all the products. It’s not a fee.”

The new Brainstorm location has room for 36 people to play. Dungeons and Dragons draws a crowd on weekends.

Gaming space at the new Walkersville location was a priority for Frazier, whose downtown location had room for only about two gaming tables.

“We definitely heard people saying if you had more space we’d come in and game more, if we gamed more we’d buy more,” Frazier said.

Graphic novels are bound, hard- or softcover books that tell a story concisely, much like traditional novels. Additionally, comic books will collect six or more individual monthly issues into a graphic novel, which are easier for readers to collect when a story is far into its run or is already over.

The shift to graphic novels can be attributed to a variety of factors, Cohen said, such as the hope to appeal to more “classic” book readers, who would prefer to read a story with a more polished beginning and end, rather than investing in a serial, monthly story.

Graphic novels have also helped attract younger readers. For example, Raina Telgemeier’s graphic novels, which are aimed toward middle-grade girls, have sold millions of copies in the last decade.

“Teachers and librarians love [children’s comics] because kids want to read and there’s really good reading in it,” Cohen said. “My wife scoffed and then read ‘Guts’ [by Telgemeier] and said, ‘Oh, my God, this is really good.’ ... That’s why everyone loves this woman.”

Frazier has a kids’ section in his downtown location and hopes to build one at the Walkersville location as well.

The popularity of graphic novels, however, means investing in pricier products.

“Carrying 5,000 graphic novels means you’re sitting on thousands and thousands in costs of inventory, and you’re only going to sell how many a month?” Cohen said. “So the thing we’re always trying to do is get rid of the ones we don’t sell, or let them sell out of the inventory.”

This is especially difficult when Amazon can afford to sell the books at lower prices than small businesses can. Amazon can also get discounts from the publisher itself for ordering in bulk, which a small store that will sell only a few copies of each book cannot afford to do, Cohen said.

Cohen said that most monthly issues — or “floppies” — will sell only one or two copies in a store of his size.

Frazier said that he has seen his sales increase every year, across the board since he took over the business five years ago. He’s optimistic.

“I’m a big believer, if you have the right attitude, and the right approach to comic books ... that there’s still a lot of growth in the market,” Frazier said.

Looking toward the future

Another reason Frazier wanted to expand Brainstorm was so he could sell an extensive collection of back issues. He started buying comic book collections of older issues years ago and has since amassed more than 250,000 books.

He needed a place to put all of them — and the smaller store downtown wasn’t going to hold them.

“I think it’s an untapped market for a lot of people, because collectors still want those older issues,” Frazier said. “They want to be able to go and thumb through things, and find that issue they’ve been missing and they’ve been hunting for quite some time.”

Cohen, too, has taken to carrying more back issues in the store. The issues appeal more to collectors, as well as people who are just looking for a cheap read. While some back issues are worth a chunk of money, there are plenty the store can sell for $1 or $2.

“New comics are $3.99. So we reached a point where it might be cheaper to buy an older comic than it is a newer comic,” Cohen said. “And we’re going to keep that price down.”

Both owners have extensive plans for their businesses.

Frazier hopes to expand to even more stores.

He also hopes to self-publish comics in the future, by both him and local artists who are regulars at Brainstorm.

While Cohen is optimistic about the year to come, the optimism ends somewhere.

“If anybody asks, ‘Should I open a comic shop?’ the answer is no,” he said.

Somehow expanding comic shops seems so appropriate for Frederick. It explains a lot.

Do they make The Thing planters?