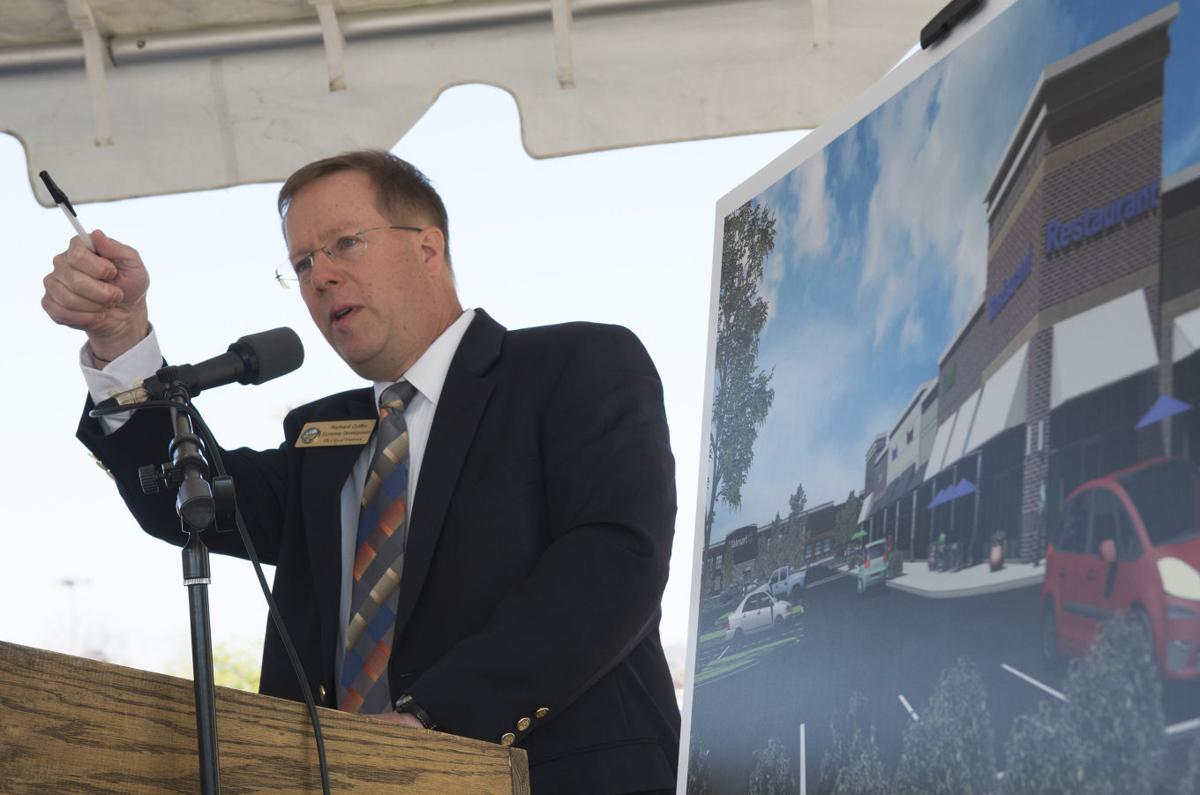 Richard Griffin, director of Economic Development for the city of Frederick, provides opening remarks during a groundbreaking ceremony for the Frederick Towne Center, which will replace the long vacant Frederick Towne Mall. 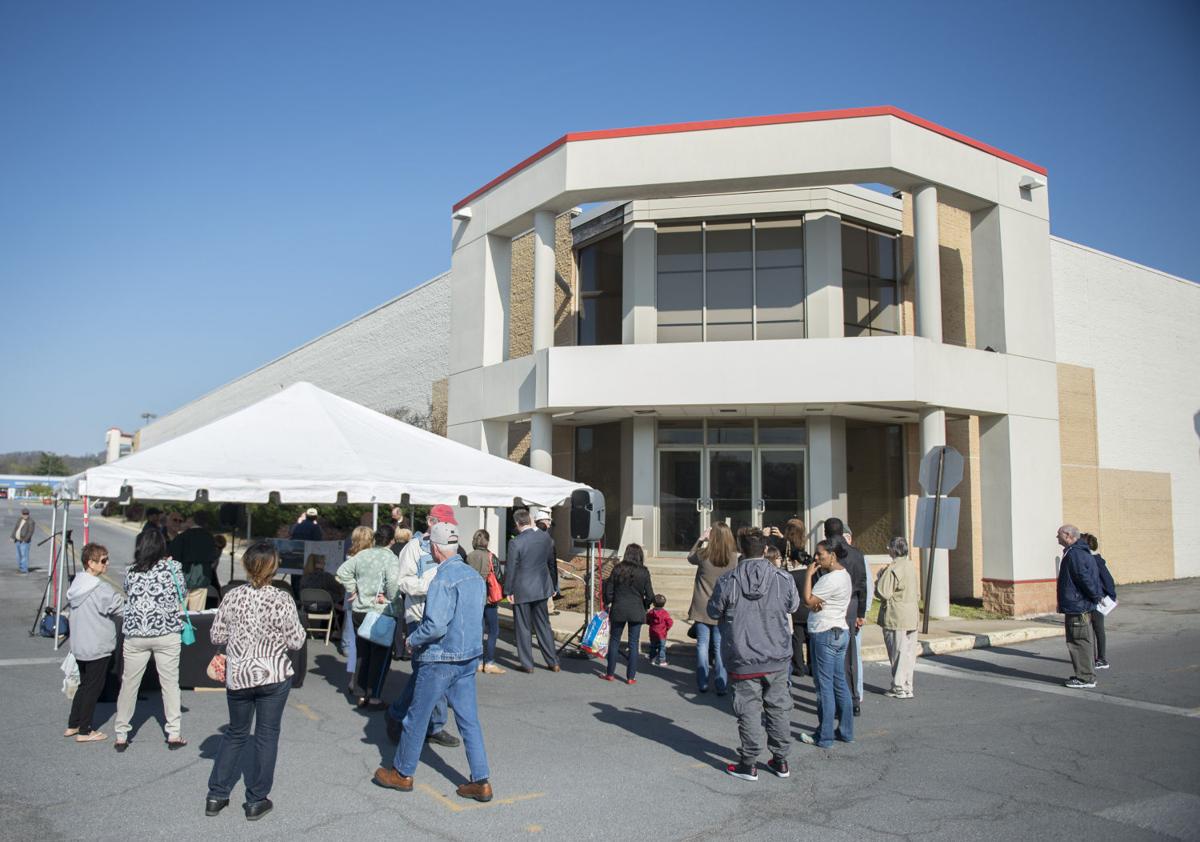 Richard Griffin, director of Economic Development for the city of Frederick, provides opening remarks during a groundbreaking ceremony for the Frederick Towne Center, which will replace the long vacant Frederick Towne Mall.

The small scoops of overturned dirt outside the Frederick Towne Mall were barely noticeable to passersby.

But to the mix of elected officials, community leaders and developers who donned hard hats and picked up shovels on Saturday, the groundbreaking represented the first tangible sign of progress toward reviving the long-vacant site.

The project to demolish the former mall at 1301 W. Patrick St. and redevelop the space as a four-building shopping center complete with a 155,000-square-foot Wal-Mart has been in the works for several years. Until Saturday, though, the outward appearance has remained unchanged, fueling public perception that the redevelopment was stalled or had fallen through entirely.

“Until recently, they really hadn’t had anything to see,” said Justin Kiska, president of the Golden Mile Alliance. “I think this proves that things are really happening now on the Golden Mile and at the Frederick Towne Mall.”

Kiska was one of several local leaders who spoke at the groundbreaking ceremony before a crowd of roughly two dozen people. Others, including Frederick Mayor Randy McClement and representatives from the project developer DLC Management Corp. and property owner Rockwood Capital, shared similar words of praise for the significance of the event.

The new Wal-Mart and additional 16 retail shops planned as part of the four-building Frederick Towne Center project will create additional incentive for businesses and customers to come to west Frederick, McClement added.

The project has faced several delays since receiving the go-ahead from the city Planning Commission in 2014. The proposal required a series of state approvals and permits, as well as modifications to the complex heating and cooling system to ensure that Boscov’s, which will become part of the new development, can remain open during the demolition and new construction.

Dave Severn, an attorney representing Rockwood Capital, acknowledged that the road to approval had been long and arduous, paved with “an extraordinary series of obstacles.”

A few remaining state permits, most notably from the Maryland State Highway Administration, are still pending, but Severn said he hoped to receive final approval within the next month.

The timeline for demolition and new construction will be largely dependent on when those final details are ironed out. Severn said work on the HVAC system would start “fairly soon,” followed by demolition within the next six months.

The demolition and new construction will take about 12 to 16 months, with the 16 retail pad sites slated to open by December 2017, Severn said.

As of Saturday, the 40,000-square-foot shopping center that is part of the project had no confirmed tenants, according to Adam Greenberg, the mid-Atlantic director of leasing for DLC Management Corp. However, Greenberg said the company was in negotiations based on letters of intent with at least 10 potential tenants.

He said he anticipated finalizing leases within the next few months.

The project also includes two smaller buildings anticipated to become restaurant sites. Greenberg could not comment on the status of those buildings because his company is not handling those leases.

The project will also include a mixed-use path and park space along Rock Creek on the site’s northern edge, according to site plans approved by the city. Other improvements include walking paths, a sheltered bus stop, landscaping and connections to adjacent roads and sidewalks.

Groundbreaking ceremony for Frederick Towne Center to be held this weekend

A groundbreaking ceremony for the long-vacant Frederick Towne Mall on the Golden Mile will take place this weekend, according to a news release.

Grand opening in December 2017, riiiight! I suspect December 2018if at all. Heck it's taken them 3 years from the rezoning just to get to groundbreaking. Kiska led us to believe the HVAC work was underway. Now we find out that it hasn't even begun!

From the looks of the pictures, it seems the reservation thing was a good idea. Wouldn't want a crowd of people there!

Frederick gets another Walmart! It's about time. We only have two (2) currently.

Yep, a Walmart is just what the Golden Mile needs to spruce it up and set it apart from every other 'strip' all across America.

Frederick County residents are nothing if not generous -- I'm sure they won't mind picking up the slack and providing public assistance to Walmart employees -- the vast majority of which will be paid just over minimum wage and purposely held to less than 40 hours per week, so Walmart will not have to pay for any pesky benefits.

Walmart employees know better than to get uppity and attempt to unionize. Walmart will harass and/or fire them if they do. But hey, unions are vaguely socialist, right?

I for one am glad the city did not do anything crazy like purchasing the property not currently used by Boscov's and Home Depot and turning it into a park or something.

Here's my question to you, do you live up to your words and absolutely, positively NEVER shop at Walmart, or are you just another Walmart hater repeating the talking points provided by the Unions and Democrats while secretly shopping at Walmart and somehow justifying your hypocrisy? Nothing new here, keep moving.

My wife and I haven't shopped at Walmart for probably 20 years, and have no plans to.