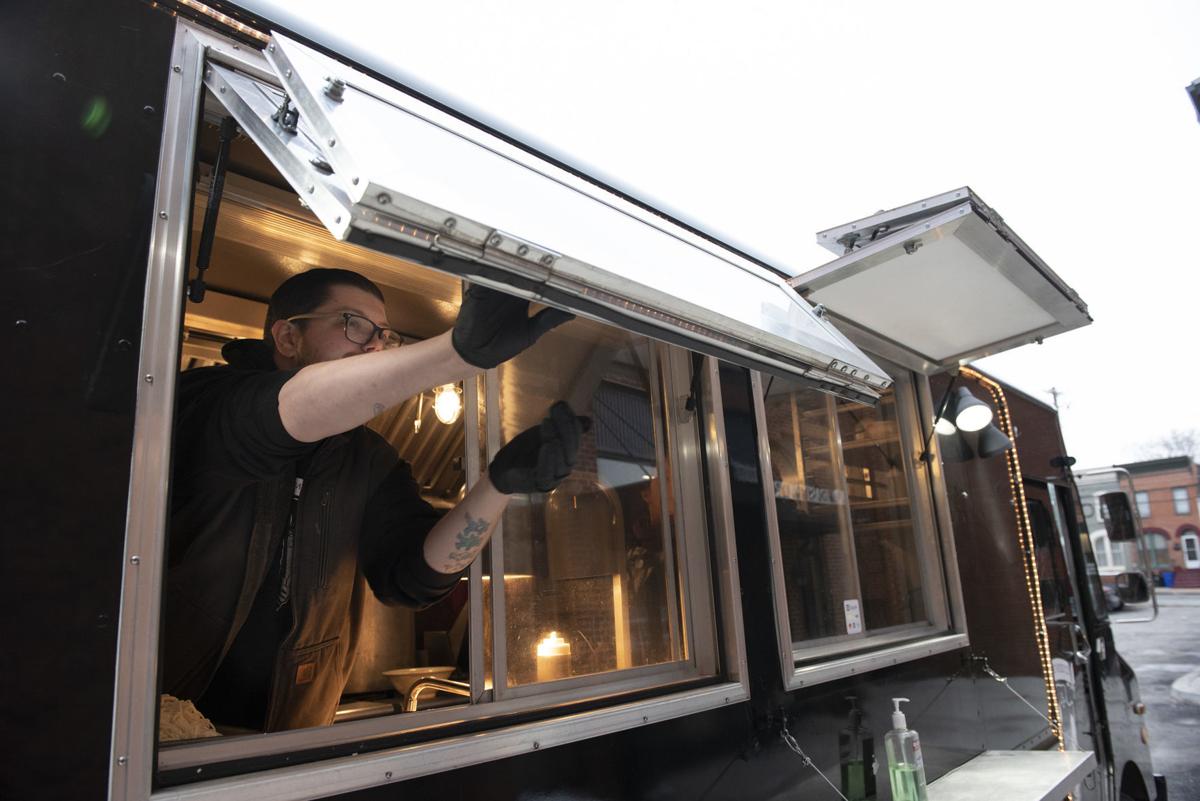 Ben Cohen opens the windows to the Gambrill Mt. Food Co. food truck outside of Idiom Brewing Co. in downtown Frederick. The company is one of 14 set to participate in the first-ever Frederick Food Truck Festival at the end of June. 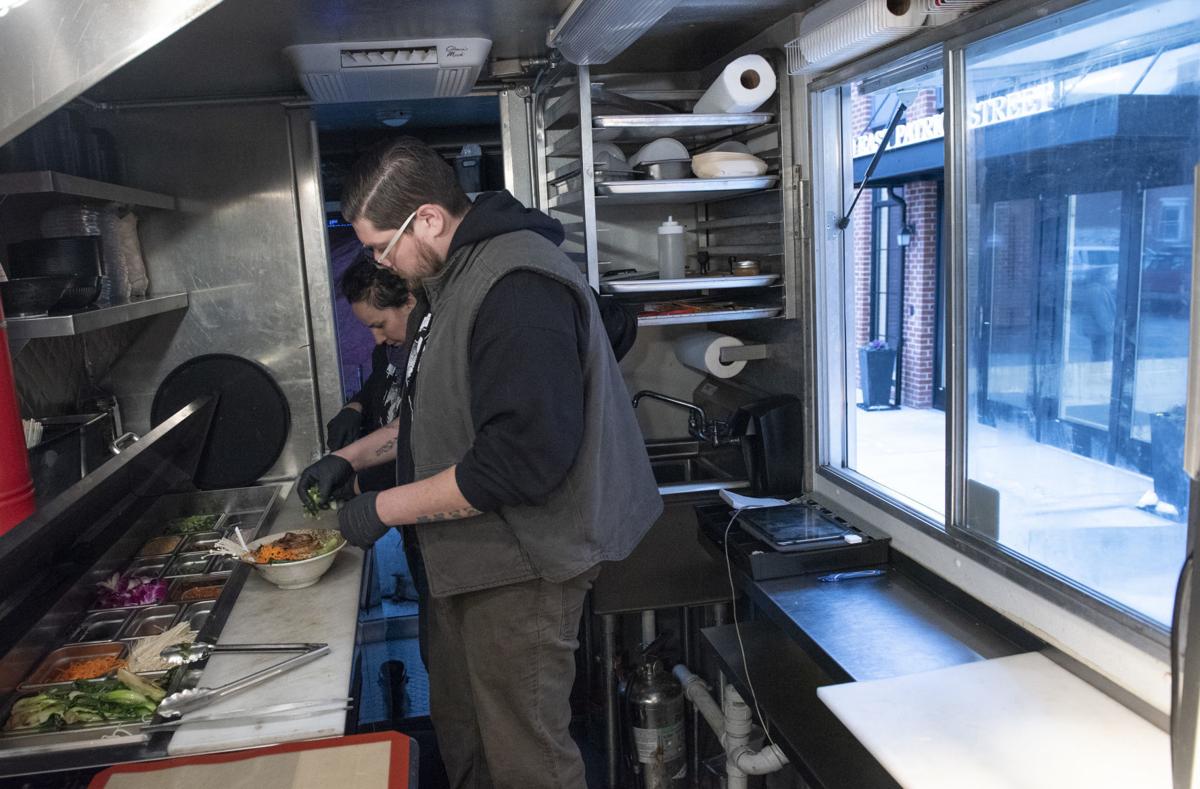 Ben Cohen and Jasmin Tregoning prepare a ramen bowl from their food truck during a recent evening outside Idiom Brewing Co. in downtown Frederick. 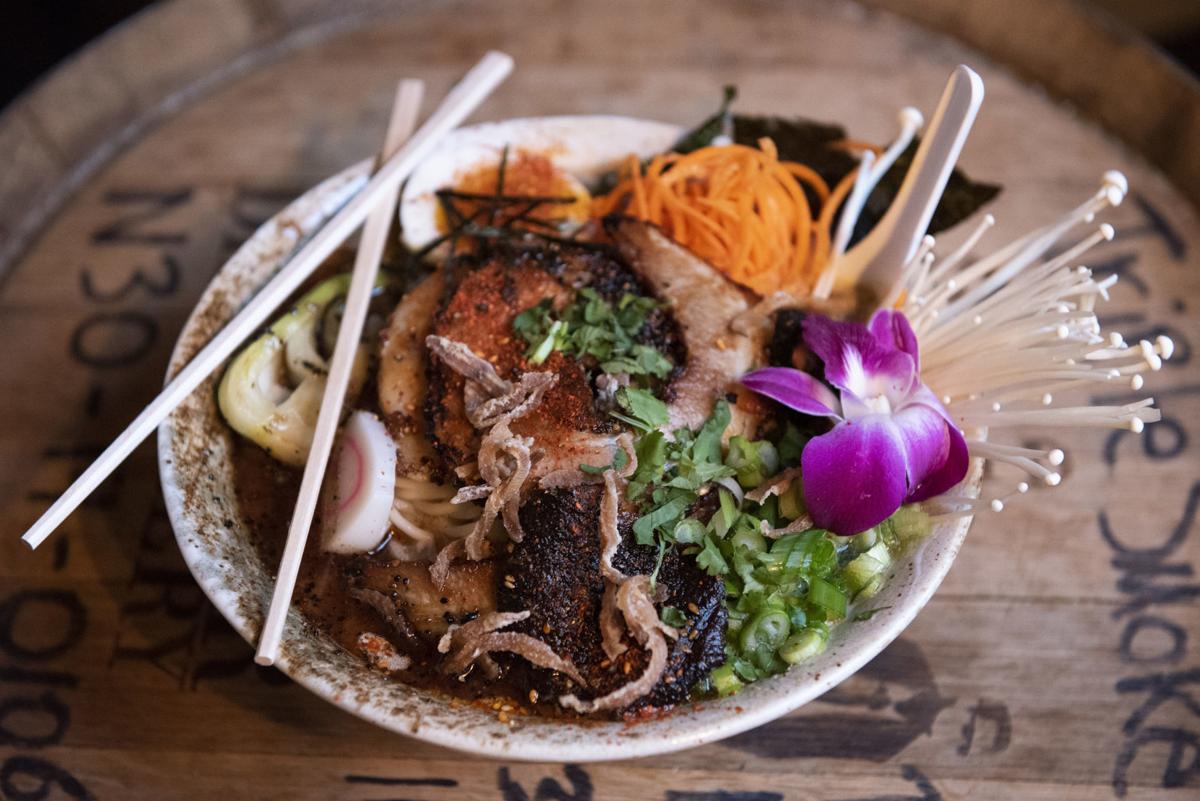 A ramen bowl from Gambrill Mtn. Food Co. food truck during an evening outside Idiom Brewing Co. in Frederick.

Ben Cohen opens the windows to the Gambrill Mt. Food Co. food truck outside of Idiom Brewing Co. in downtown Frederick. The company is one of 14 set to participate in the first-ever Frederick Food Truck Festival at the end of June.

Ben Cohen and Jasmin Tregoning prepare a ramen bowl from their food truck during a recent evening outside Idiom Brewing Co. in downtown Frederick.

A ramen bowl from Gambrill Mtn. Food Co. food truck during an evening outside Idiom Brewing Co. in Frederick.

In June of 2017, food truck owners in Frederick secured a modest victory. The city approved a change to its existing vendors and peddlers ordinance, creating a narrowly tailored law that allowed “mobile food vendors” to set up in the parking lots of craft breweries, wineries and distilleries.

At the time, the change was mostly seen as a boon for the local craft beverage industry, which rallied around the proposed ordinance. City staff described the change as a way to keep breweries and distilleries competitive with local restaurants.

“We think this is something that is an aggressive and forward-leaning move to really support the industry,” said Richard Griffin, the city’s director of economic development.

“If it weren’t for them, we wouldn’t be having this conversation,” added then-alderman (and current mayor) Michael O’Connor.

“It was much more oriented toward the breweries themselves,” agreed Kara Norman, the executive director of the Downtown Frederick Partnership, in a phone interview last week. The Partnership worked with local restaurants and craft brewers to craft the ordinance, which was seen as a happy medium for both industries. The city’s craft beverage establishments — largely prohibited from operating kitchen spaces — were free to partner with other small business owners to keep their customers happy, engaged and fed. But it also kept food trucks isolated to a specific subsection of the city, safely removed from the brick-and-mortar restaurants downtown.

“Based on those parameters, everyone was comfortable with it,” Norman said. “It seemed like a win for everyone involved.”

In the roughly year and a half since the ordinance was passed, however, food trucks in Frederick County have become their own burgeoning industry. Brett Novick, the owner of the Brunswick-based food truck Boxcar Burgers, estimated there were three to four food trucks operating locally in 2017. Since then, he said, that number has more than doubled. Novick himself added a second truck in June of 2018 to keep up with demand. Mayta’s Peruvian Cuisine, a brick-and-mortar restaurant on Buckeystown Pike, launched a food truck three months after the new ordinance passed. Several other vendors have joined the fold, from Just Smokin’ Around — a barbecue truck that joined the scene in 2017 — to The Pham, a Vietnamese food truck introduced last August.

As the industry grows larger, some trucks are already looking past the current guidelines. For many vendors, including Mayta’s owner Jorge Velasquez, it’s merely a vague hope of expanding their presence in the city beyond breweries, wineries, and distilleries. Other trucks are actively testing the boundaries of the ordinance. For Ben Cohen, the owner of Gambrill Mt. Food Co., the current limitations on food trucks pose both an economic and a symbolic restriction.

“We’re a small local business and we’re invested in the city,” Cohen said. “I feel like we deserve to be a part of downtown Frederick just as much as anyone else.”

To that end, Cohen — who runs Gambrill Mtn. with his partner, Jasmin Tregoning — has worked to find loopholes in the current ordinances governing food trucks. The business owners still operate their vehicle from breweries in the city of Frederick, but they’ve also set up in other locations under the permissions granted by the more general vendor/peddler license.

The issue, at least for Cohen, is that those permissions are limited in scope. According to Gabrielle Collard, the city’s division manager of current planning, vendors and peddlers are only allowed to set up in residentially zoned areas of the city, excluding the historic district that encapsulates most of downtown Frederick. The ordinance also requires vendors to change their location every two hours, “and...not relocate within the same block of the street within the same day.”

Still, Cohen and Tregoning have tried setting up in a few different locations downtown (a departure from most food trucks, which tend to stick to the breweries and distilleries). Over the past few months, they’ve parked the truck on West Second Street near Culler Lake — outside the boundaries of the historic district overlay — and on Carroll Parkway near the Baker Park bell tower, which technically falls within the historic district.

On one occasion, they also parked their truck on East Church Street across from Frederick Coffee Company — a location within the downtown historic district, and one where they occupied the same block for several hours.

“It’s confusing, though, because we’ve never been totally clear on where it’s OK to park,” Cohen said. “And I think the city is just as confused as we are.”

For Cohen, that confusion is just one example of how current ordinances are unfair — or unnecessarily burdensome — to food truck owners. Keeping the trucks restricted to craft beverage establishments limits their economic potential, he argued, and keeps them subject to permissions from breweries, wineries, and distilleries. The current requirement to move locations every two hours is also unfeasible — and unsafe — for vehicles that essentially house working kitchens.

Other food truck owners, including Velasquez, agree that the city could establish specific zones — beyond craft alcohol establishments — where trucks could regularly set up shop. But the view isn’t universal among downtown business owners or even among mobile food vendors themselves.

“In an ideal world, I’d love to go downtown,” Novick said. “But I also know that being able to access the breweries and distilleries at all was kind of hard [to] get. I started the business with the understanding that those were the rules and the restrictions. So, to argue about them now seems kind of lazy.”

It’s also a controversial suggestion for some downtown restaurant owners. Mike Winder, the owner of Frederick Coffee Company, was not happy to see Gambrill Mtn. set up near his business, especially during busy lunch hours. Beyond citing safety concerns — lower visibility, the potential for trucks to block crosswalks or intersections — he argued that the trucks posed a threat to brick-and-mortar businesses that had supported downtown Frederick for years.

“I’ve been in the city for a long time and been invested in it for a long time,” Winder said. “So for someone to come in with a food truck and potentially cannibalize my business without doing all the work — that I’m not a fan of.”

It’s an issue that could receive more political traction this year. Frederick Alderman Ben MacShane said he’s interested in revisiting the current food truck ordinances and modifying them for a growing industry.

“I think to keep a city vibrant, you have to adapt to these new businesses coming in,” he said. “And everyone can learn to adjust. Just because someone new is allowed to operate doesn’t mean that you’re getting screwed.”

I don’t know many people who have had positive experiences with Widner and I definitly do not value his opinion. I love how he seems to think there is no investment in a food truck. To say that is just ignorance. I can tell you that it is not uncommon to invest 100k or more into a proper food truck. The health department standards are also extremely detailed and are more involved than a brick and mortar location. If a competitor offers a better product that’s not on them maybe you should look at yourself. Don’t act like you are about community when you’re not. try being a nice person once in awhile. You’re not fooling anyone.

Get over it. It's just a.food truck. Just a food truck.

[lol][lol][lol]rb. That`s way if a plague ever hits this country rb people like us will servive[thumbup]

Yummy yum rb[smile]question though, was the hamburger 98% lean? cause it sounds like your boy provided enough grease/moisture for that fluffy, finger licking burger.

Got that right rb[thumbup]back 45 or so years ago could`t wait for them to pull onto the job-site. Best coffee and pastries but one problem, the pastries has ants crawling all over them. I asked the vendor, what`s with the ants? He said protein boy! and a extra nickel for the ants. He just shook off the ants, handed to me and I just went on with the program[wink]

Years ago we had Scotty's Bus. He would park over near McCurdy Field. You could order a burger and Ray would grab a handful of meat and slap it up in his arm pit to form the burger, then straight to the grill. Many have tried to copy his burger but no one has been able to duplicate the pit sweat that made it taste so good.

There are still a few places in town where you can get Pit Beef sandwiches!

You'd undoubtedly be surprised at the health regulations and inspections the food wagons are subject to.

All restrictions should be lifted on weekends in the city after midnight when all the restaurant kitchens are closed. There are a lot of drunk and hungry people downtown after midnight and there is nowhere to eat.

Good move placing meals on wheels at alcohol establishments. When you drink you need to think. Eating something to stay stable is a must if not, you`ll be kissing the pavement/concrete sooner or later[wink]