A 350,000-square-foot high-tech fulfillment center for the nation's largest grocery retailer will bring about 500 jobs to Frederick County. The Kroger Co. announced plans Thursday to construct the center at 7106 Geoffrey Way, off Md. 85 in the former Toys R Us property that closed its distribution center in early 2018.

A 350,000-square-foot high-tech fulfillment center for the nation’s largest grocery retailer will bring about 500 jobs to Frederick County. The Kroger Co. announced plans Thursday to construct the center at 7106 Geoffrey Way, off Md. 85 in the former Toys R Us property that closed its distribution center in early 2018. 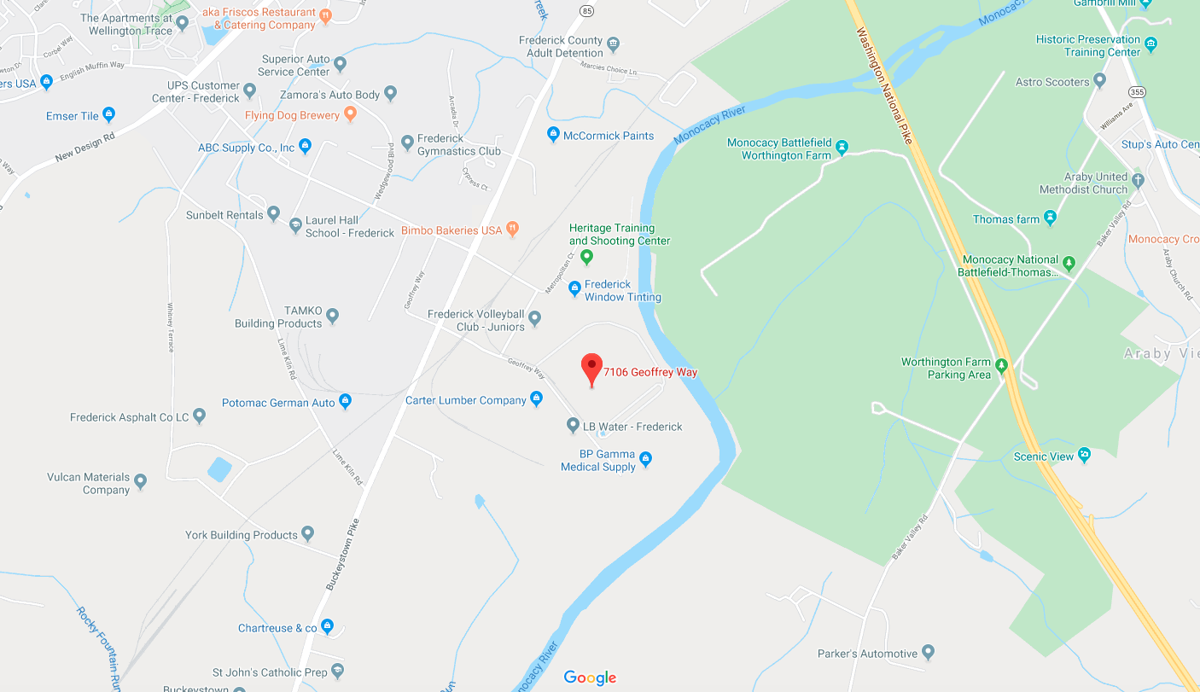 A 350,000-square-foot high-tech fulfillment center for the nation's largest grocery retailer will bring about 500 jobs to Frederick County. The Kroger Co. announced plans Thursday to construct the center at 7106 Geoffrey Way, off Md. 85 in the former Toys R Us property that closed its distribution center in early 2018.

A 350,000-square-foot high-tech fulfillment center for the nation’s largest grocery retailer will bring about 500 jobs to Frederick County. The Kroger Co. announced plans Thursday to construct the center at 7106 Geoffrey Way, off Md. 85 in the former Toys R Us property that closed its distribution center in early 2018.

A 350,000-square-foot high-tech fulfillment center for the nation’s largest grocery retailer will bring about 500 jobs to Frederick County, according to an announcement from the county executive’s office.

Kroger is partnering with the Ocado Group, the world’s largest online grocery retailer, which will provide and maintain the digital and robotic equipment used at the center. Together, the companies will automate the customer fulfillment center — also known as the “shed.”

The fulfillment center will be filled with robotics, and upon completion, will create 400 new jobs with up to 100 more added later as the service area expands, the press release said.

“This is excellent news for Frederick County,” County Executive Jan Gardner said in a news release. “We are thrilled to welcome Kroger and Ocado. Their high-tech innovative business will bring life to a vacant distribution facility, will add hundreds of new jobs, and make an investment of tens of millions of dollars in our community.”

Gardner added the county fast-tracked the permit process, and that they have added to the county’s e-commerce presence in the business community.

Helen Propheter, director of the county’s Office of Economic Development, said she was “thrilled” Kroger was coming to Frederick County but declined to answer further questions, citing a nondisclosure agreement between county officials and the company.

Kelly Schulz, the state’s secretary of commerce, said in a statement that Kroger’s decision is a win not just for the county, but the state.

“By operating in Maryland, our centralized location will provide this grocery partnership with convenient access to several highways and access to thousands of customers across the East Coast,” Schulz said.

According to news releases, county officials agreed to reduce permit fees by up to $150,000 for the project, and roughly $5 million in county commercial and industrial tax credits over the next 10 years. The state’s Department of Commerce provided a $2 million conditional loan through Advantage Maryland, formerly the Maryland Economic Development Assistance Authority and Fund.

Tim McGurk, regional director of corporate affairs for Kroger, said in an email the county’s e-commerce industry and officials’ help over the past few months were reasons they decided to come to Frederick County.

The intent is to keep the jobs local, but work will be offered to the most-qualified applicants, he added.

“This great location, with existing infrastructure, provides easy access to Maryland, Pennsylvania and the District of Columbia,” McGurk wrote. “Kroger appreciates the partnership that was developed with the Frederick County team through the past few months. Their assistance navigating the permitting process is greatly appreciated.”

State property records show that Toys R Us, the former tenant at the site, bought the property in August 1995 for $716,800. It closed its distribution center in early 2018 after Toys R Us announced it was closing all its stores, The Frederick News-Post previously reported.

Personally, I don't like to give tax breaks to companies, but if it means jobs, I am all for it.

What if the tax breaks means jobs but ultimately the costs to the tax payers in terms of dollars (we'll keep it simple and not even include factors such as quality of life) are more than the revenues generated? Are you still for those tax breaks?

That would still depend on how you look at taxes, how much wealth is generated by the multiplier effect, how many taxes from the jobs and how much income in wages. It is not a simple answer.

Another incomplete article from the lack of news, post. What exactly is being fulfilled at this center? I wonder if we will get a Harris Teeter out of the mix. There was a rumor floating around a few years ago that one might be built on the corner of East Church and Schifferstadt Blvd. it’s nice that this huge, empty building is going to be used and that jobs will be available, but who is going to fill them?

"Fulfillment Center" is just a fancy term for distribution center. Big batches of food and stuff come in, are sorted and combined as appropriate, and are then shipped out to the appropriate store.

So in this case orders will be packed and delivered directly to customers.

As I eluded to in my official award winning comments over 6 months ago - I can see something like this going in on Biggs Ford Road In lew of a solar farm. People opposing the solar farm - careful whut u wish for.

No, its my Frederick Countie native dialect

Didn’t know there were 500 robots living in Fredneck.

Posters might be misinterpreting what is meant by a "high-tech fulfillment center." If it is just a distribution warehouse with robotics, would they need 500 people to run it?

Nevermind. After looking it up, it looks like it is just a distribution warehouse with robotics. Apparently, they are building about 20 of these fulfillment centers in the US, costing about $55 million each and employing about 400 people each.

Next thing you'll here from the posters is will they open a store on Market St.

I assume this "fulfillment center" will occupy the long vacant Toys "R" Us facility. Will the county change the name of Geoffrey Way to sweeten the deal?

Interesting how a highly robotic warehouse will employ 400 people soon and another 100 in the near future. The problem is that many large companies over-promise on the number of new employees they will hire so they get all the tax perks, etc. Then after they are up and running they may employ half, or less, of their original estimate. So FNP here is a good story for you - see how many employment promises made by new or expanding Frederick county businesses really came true.

Joey... Robotics are very good a mundane, repetitive tasks. Robots, as of yet, cannot diagnose, or repair, themselves. My Dad retired from Nissan as a robotic tech, and he spent many long days ensuring the line continued to produce.

While I cannot comment on Krogers use of robotics, there is a very real requirement for technical employees to keep the "line" moving.

Hope it works out as planned.

[thumbup] Recent article in FNP about Amazon use of robotics:

So how many technicians does it take to repair a robot? I doubt 400 to 500. Again these are probably mostly jobs that won't pay for the added services required by the addition of 400 to 500 workers and potentially their families (and given the low unemployment rate, they're not all likely to come from the existing pool of unemployed in Frederick.

Depending upon the robot, it can take up to 4. Some direct current based robots require additional personnel as safety measures due to the speed and quietness of the robot itself. Larger hydraulic based units, like the Kawasaki models, can need 2 technicians due to the complexity of the hydraulic systems. Most robots are not removed from the line to be worked upon, they are production units, and getting it back into production is paramount.

But you are correct, Frederick may not have the necessary pool for all the positions, but that is not a Frederick problem, it is a national problem at the moment. Hence, the pay scale may start higher than it would have.

Thanks tatt2ed. So unless they plan on using one to two hundred robots (less if operating 24/7), most of the jobs probably won't be technical.

So, when does Frederick get a Kroger grocery store?

Don't get your hopes up. Kroger owns about a dozen different stores, including Harris Teeter and Littman Jewelers (in the FSK Mall), and I'd bet the this distribution center will support them. A distribution center doesn't guarantee a retail location.

This will be a welcome addition to the already traffic congested area, said no one ever.

I suppose they will make use of the trains that run right by there.

I wonder how many will be above minimum wage? Will the revenue generated offset the additional tax payer costs (i.e., more children in the schools, more traffic on the roads, etc.)?

I expect the hourly rate to be between $15 and $20, perhaps some a little more.

Unfortunately, not livable wages in Frederick County for a single person [sad]

It would help some. [beam]

Now the question is what is the cost of services for those 400 to 500 jobs created? Probably more than the revenue it will generate since the wages, if your projection proves to be true, are on the lower end of the range of salaries. That means more subsidies from existing tax payers to new residents and businesses all for the privilege of a lower quality of life due to the increasing population and trucks going to and from the facility.

I think it would help our economy if we have more out of towners working here, and buying goods and services here.