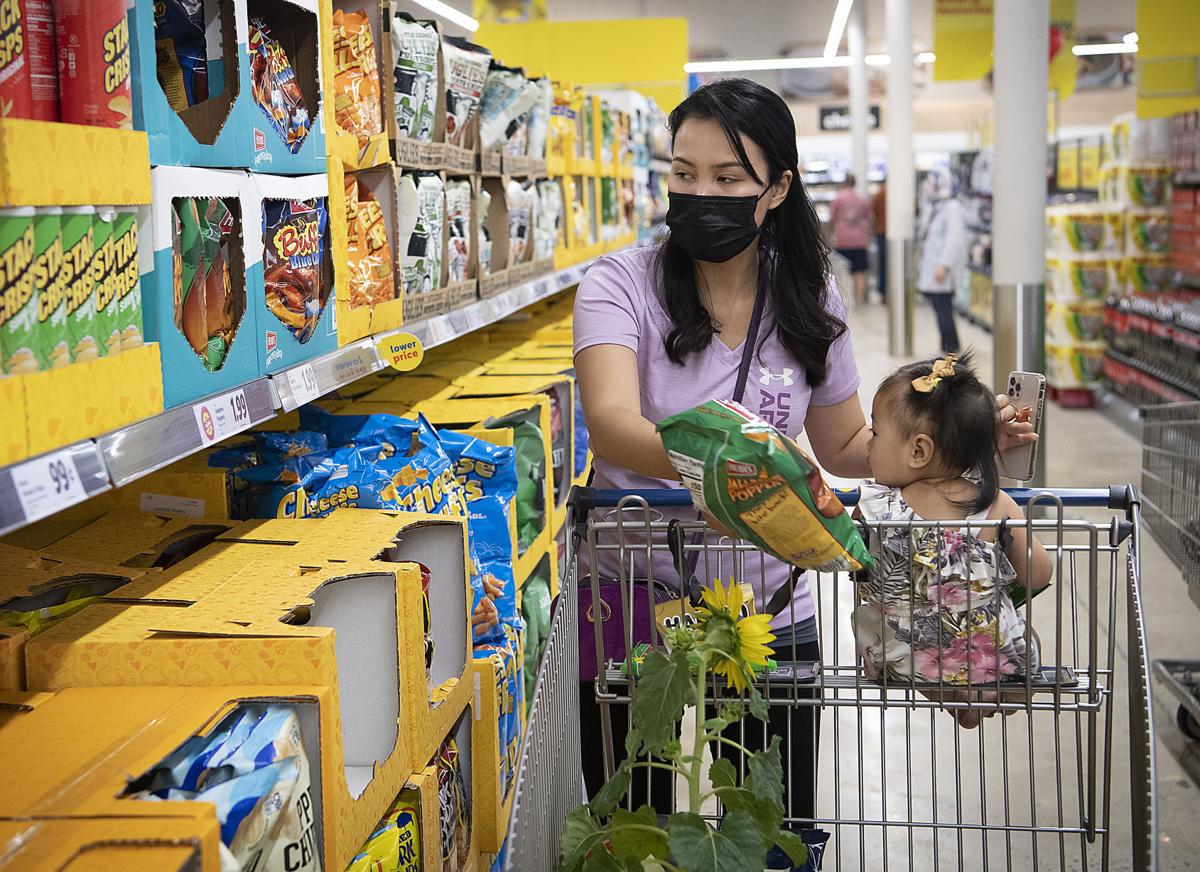 Kits Ablat and her 9-month-old daughter Evaine shop for the first time at the new Lidl store on West Patrick Street Wednesday. 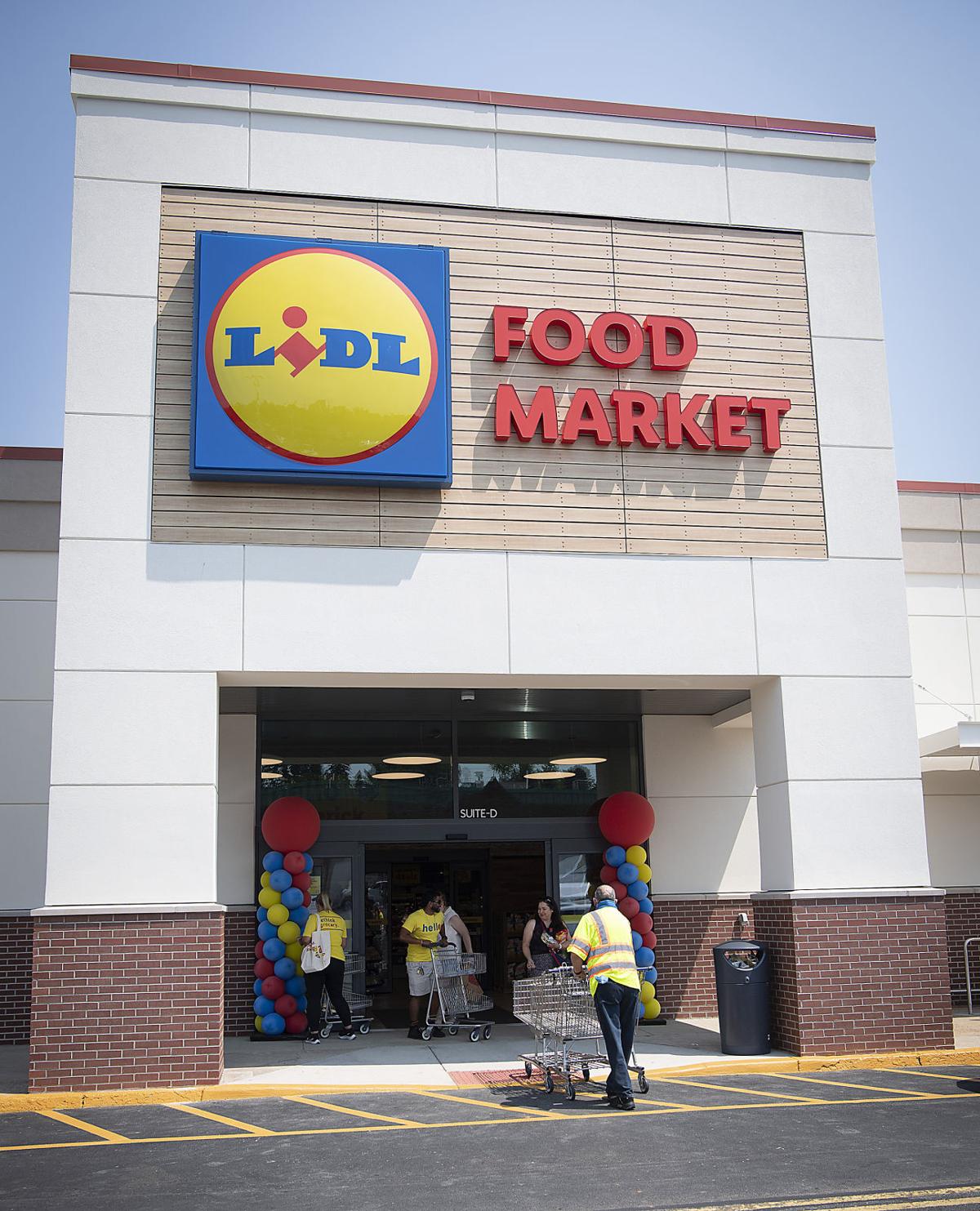 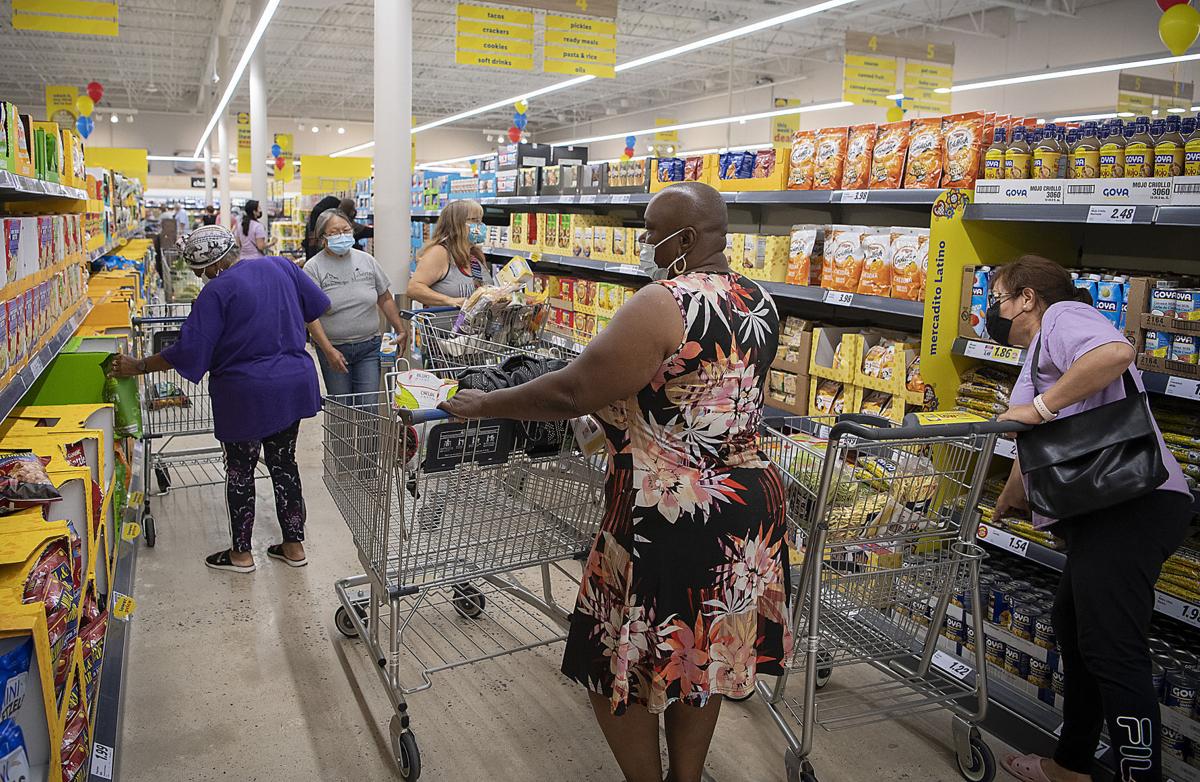 Shoppers filled the aisles of the new Lidl located at 1003 West Patrick Street in Frederick Wednesday morning after the grand opening.

Kits Ablat and her 9-month-old daughter Evaine shop for the first time at the new Lidl store on West Patrick Street Wednesday.

Shoppers filled the aisles of the new Lidl located at 1003 West Patrick Street in Frederick Wednesday morning after the grand opening.

It would’ve been nearly impossible for travelers along the Golden Mile corridor Wednesday to be unaware of the opening of Lidl’s new location.

Yellow and blue “Now Open” flags lined the area near the 1000 block of West Patrick Street in Frederick, and a massive inflatable shopping cart stocked with milk, bread and other essentials flanked the entrance to the mini mall now housing the city’s newest grocery store.

Even at noon on a weekday, the number of cars lining the store's parking lot resembled the eve of a major holiday, and shoppers passed blue tents offering free ice cream before reaching Lidl's balloon-lined entrance.

Inside, the store hummed with activity. Shoppers filed in and out, and lines formed at nearly all registers. District manager Neil Kavanagh darted about, orchestrating the controlled mayhem that accompanies such openings. Ensuring that lines at the registers didn’t grow too long would be a top priority for the day, he said.

“The last thing we want to do is give the wrong first impression,” Kavanagh said.

Saturday will likely be bustling too, as it is typically one of the busier days in the first week of a store opening, said Kavanagh, who also oversees two Lidl locations in Virginia and one in Hagerstown.

Lidl is the last of four tenants — the others being Harbor Freight Tools, Ollie’s Bargain Outlet and Goodwill Industries International — to take over the 94,000-square-foot lot that Kmart vacated in 2020. The quartet represents a new tax base and jobs in Frederick’s retail corridor, Frederick Director of Economic Development Richard Griffin said in an email to the News-Post.

Griffin’s colleague and Frederick's economic development manager, Mary Ford-Naill, said the addition of high-profile businesses like Lidl is promising for the city’s retail market, especially given the pandemic’s toll on the industry. The Golden Mile is a high-traffic area, Ford-Naill said, and she anticipates Lidl benefiting financially from the level of activity along the corridor.

Shantay DeMar, vice president for the Golden Mile Alliance, a nonprofit that advocates for business along the corridor, said the grocery chain contributes to retail options available to city residents and he foresees Lidl attracting more people to the area.

DeMar hopes to involve Lidl in the alliance’s fundraising, he said. He’d like to see the alliance partner with the chain on some projects, which would include Lidl helping with food, monetary contributions and space, such as its parking lot, for cookouts and other events.

The opening marked the culmination of a months-long wait for Frederick residents shopping Wednesday at the German grocery chain.

Urbana resident Lana Larina said, as she enjoyed a pre-shop ice cream pop, that she’d been anticipating Lidl’s arrival since learning on Facebook months ago that the location would be opening this summer.

Virginia Hayes, of Frederick, saw various Facebook posts more than a year ago about the incoming location. Given the hype she saw on social media, Hayes wasn’t at all surprised by Wednesday’s turnout

Hayes would shop at the Hagerstown Lidl when she visited her children in the area, and she’s looking forward to making the Golden Mile location her go-to spot for produce and dairy.

An earlier version of this story incorrectly spelled the name of district manager Neil Kavanagh.

How frequently do you shop along the Golden Mile?

Alliance: Golden Mile doing well, but progress still to be made

Both Lidl and Aldi are much cheaper than Safeway or Giant, I don't know how those bigger stores will be able to compete. Competition is good for the consumers though, so bring it on.

I never go to the not so Golden Mile. Make the wrong turn and you are in a parking lot unconnected with whatever store you were trying to go to.

Want to go to a store on the other side of the highway? Take your life in your hands.

Don't exaggerate, it's nowhere near that scary these days.

[yawn][yawn] Long rambling arti le and only one word suggesting the selection of foods they offer. German. Would have been nice to say a bit more about that instead of all the economic devopmdnt stuff. I'm surely not going to rush over there to buy a cart full of economic development.

German foods? I haven't been to Aldi in a while, and not Lidl yet, but Aldi has typical American foods. Having been in Aldis here and in Germany, as well as Lidls, the stores are identical. But you can find more foreign-labeled food at Wegmans, or, of course, H-Mart.

It's a nice store and prices are comparable to Aldi. Some prices are slightly higher, some lower. Their product selectionsare better than Aldi.

There sure are a lot of food stores in Frederick. We must eat a lot.

It's an addiction that we can live with!

There are 8 grocery stores within 2 miles of my home. And, have you seen the developments on the west side (Christopher Crossing) for hundreds of homes that will be built and occupied within the next 1-3 years?

Does the customer bag his own groceries at Lidl, like w Aldi?

(I hadn't been to Costco in about a year, & I recently forgot to collect a bunch of boxes in advance to transport all my groceries.)