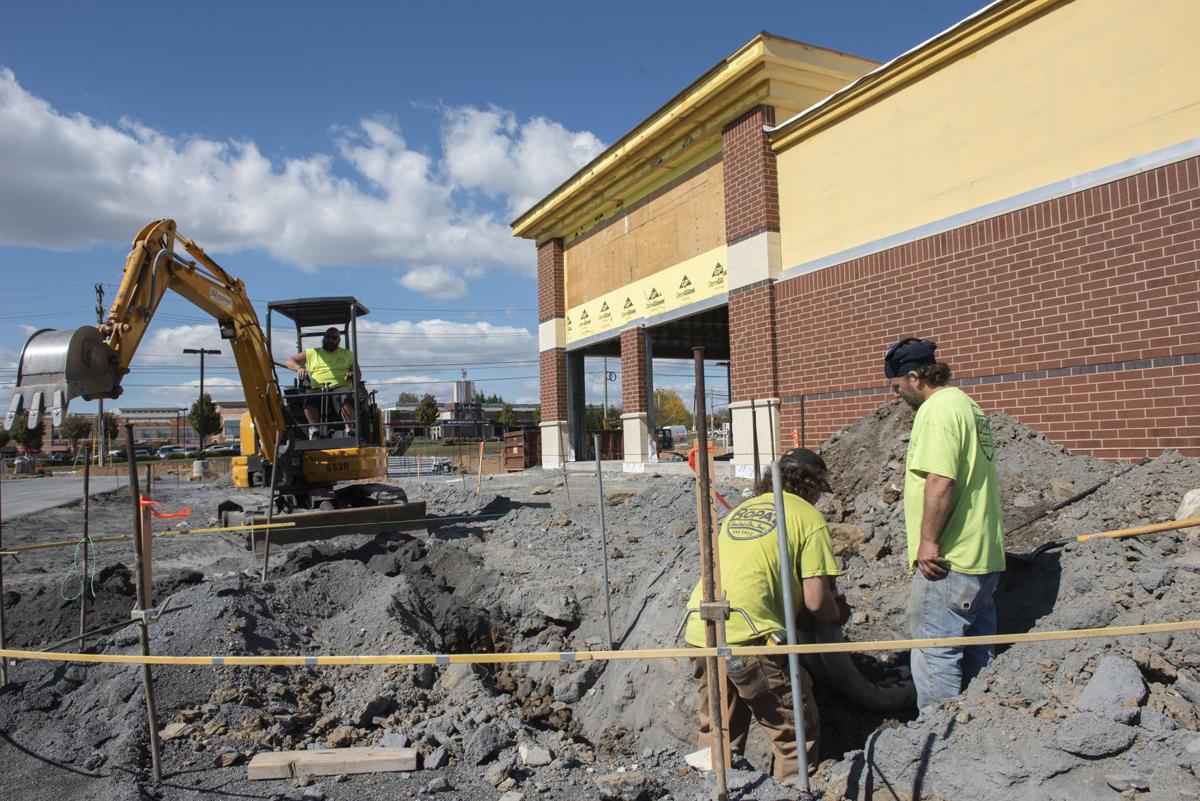 Electrical contractors work outside what will be a Mission BBQ restaurant on Pegasus Court off Buckeystown Pike. 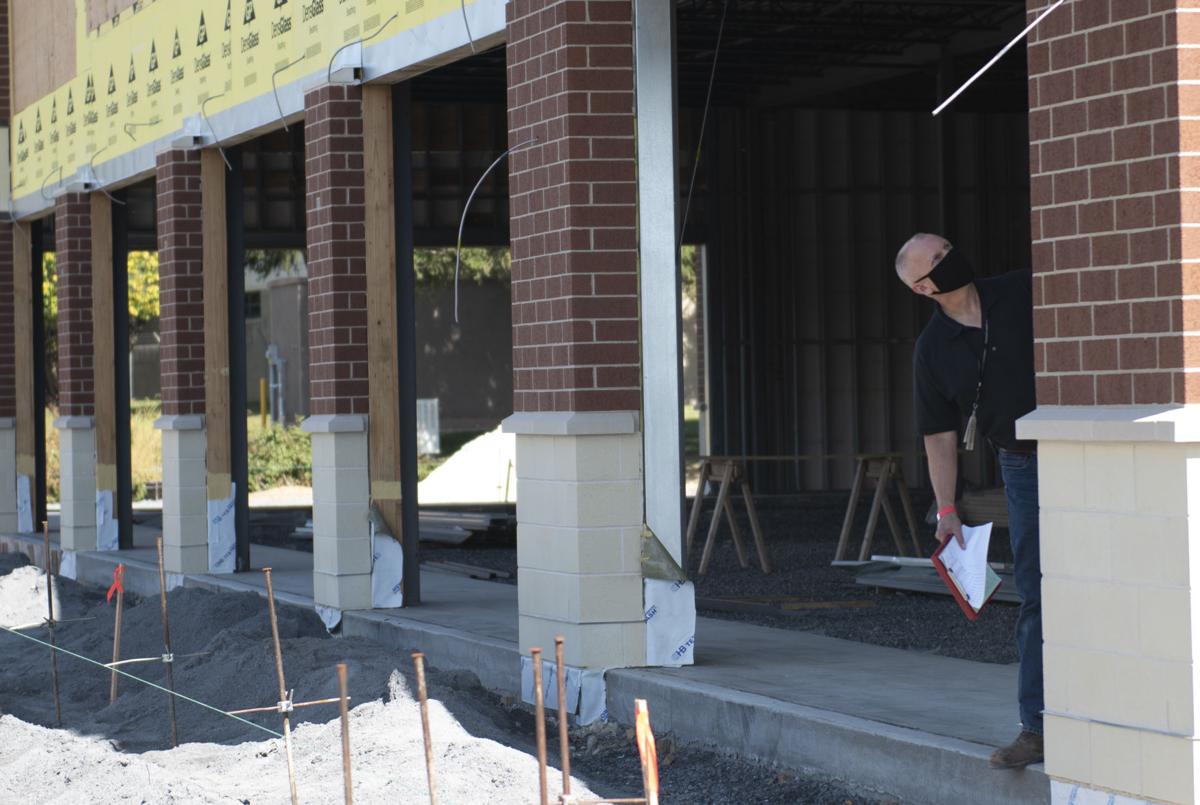 Charles Scheller, an electrical inspector with the Frederick County Government, surveys progress on the construction project that will house a new Mission BBQ on Pegasus Court in Frederick.

Electrical contractors work outside what will be a Mission BBQ restaurant on Pegasus Court off Buckeystown Pike.

Charles Scheller, an electrical inspector with the Frederick County Government, surveys progress on the construction project that will house a new Mission BBQ on Pegasus Court in Frederick.

Those who have tried the Maryland-based Mission BBQ in nearby places such as Ellicott City, Rockville and Columbia will be happy to hear that the barbecue chain plans to open a Frederick location by early 2021.

The restaurant will be located at 5102 Pegasus Court off of Md. 85. The building is currently being developed by St. John’s Properties, who also developed the surrounding Westview Business Park.

This will be Mission BBQ’s 93rd location in just nine years.

“Finally we were able to find the right opportunity with St. John’s Properties,” co-founder Bill Kraus said. “And I think that’s just kind of meant to be, with them being a Maryland-based developer it’s the perfect fit for our brand and we can’t wait to get the ball rolling.”

Mission BBQ opened its first location in Glen Burnie on Sept. 11, 2011, the 10-year anniversary of the attacks on the World Trade Center and the Pentagon. Veterans are at the heart of everything Mission BBQ does, from its Stars and Stripes salutes to its American-themed decor.

“And we’re excited to finally be able to answer that question and hopefully cut the ribbon sometime early next year,” Kraus said, “and be able to serve the wonderful community of Frederick and the surrounding area as well.”

Mission BBQ will be taking half of the 8,500-square-foot building, said Matt Holbrook, St. John’s Regional Partner for Virginia and Central Maryland.

“Mission, I think will be a destination. It’s a first-class operator and so it’s gonna attract customers in the area,” Holbrook said. “It’s also gonna attract tenants who want to be adjacent to such a thriving business.”

Many restaurants have been struggling during the coronavirus pandemic as they’ve been forced to adapt to take-out and delivery and then to outdoor dining. Holbrook said there is still high demand from biotech businesses and other industries that have not been as affected by the coronavirus.

“Here’s a restaurant that is looking forward and have been trying to get into Frederick for a while and they’re opening up in spite of everything that’s going on right now,” Holbrook said.

Kraus said he and his business partner Steve Newton found the property through St. John’s early in 2020, and decided to take the leap a few months after the COVID-19 pandemic began.

“We’re so thankful for the continued hard work of our teammates and the incredible loyal support that we’ve seen from our customers through this, that helped us to fight our way through,” Kraus said. “And we all know that we’re probably not done, but at the same time too, we’re excited about what lies ahead and the opportunity to serve yet another community, especially right here in Maryland.”

you mean the food was so good you couldn't stop stuffing your face for 1 minute to show some respect to the flag?

Why is it necessary to prove your patriotism when you just want to eat your lunch in piece?

I wonder if Reader stands and recites the Pledge of Allegiance every single time he sees a US flag.

I have to agree public. So much was made about athletes taking a knee during the National Anthem, but I wonder if sports fans watching at home stand up, take off their hats, hand over heart, stop talking (drinking, eating, etc.) and sing along with the celebrity singer du jour. I would venture not many do.

Exactly. I’ve never seen anyone stand up in a bar or airport lounge when the Nat. Ant. starts playing. I don’t know why BBQ is different.

Sort of like when the Burn Loot and Mayhem mobs use a bullhorn to harass outdoor diners in Frederick?[ninja]

For all I know, the rude patrons at Mission BBQ may have been the same people to whom you are referring.

Who cares? If I'm a restaurant to eat I want to eat, not think about having to prove how patriotic I am. Do you get offended when someone doesn't say grace or pray before a meal? Would you get offended if someone said a Muslim or Jewish prayer before eating? This is the same reason all that patriotic and political BS should be taken out of sports, that includes both sides. Why should a national anthem for two US based teams be sung before every game? It's not the Olympics, it's not an international competition.

I've had Mission BBQ. It's not as good as Black Hog.

I’d agree with that. And Black Hog pales in comparison to Chubby’s, IMO.

Haven't been to Chubby's in a while. I miss Mountaindale BBQ.

Never went there. Just heard about it.

Once in a while Chubby’s will have smoked corned beef. Be sure to try that.

Yep. Chubby's is the best. [ninja]

Didn’t “Chaps Pit Beef“ , out of Baltimore recently open up in the same general area? I go to their location in Baltimore after Raven games. Great blue collar diner. Hearty portions.

Chaps didn't recently open near there but they are two very different restaurants in their offerings.

So excited for this location to open! I have been meaning to drive out and try them for years, and now I will be able to here in Frederick, yay! Congrats, and good luck on your new endeavor.

My Montgomery County give Mission BBQ rave reviews. Can't wait to try it. And as the daughter of a Normandie Vet, I will happily stand for the anthem!

Good for you. I always like seeing people making their own choices. Love that freedom.

Way to make it political and about you, not them.

You’re oh for two. It isn’t political and it isn’t about me.

Doctor FedUp GregF doesn't like anything or anybody and he reinforces that with every post. Must be terrible to be so miserable. [sad][sad][ninja]

BBQ from a chain, no thanks.

They're not a chain. Yes they have several locations, but it is all one owner.

One owner is not smoking meat at 91 locations. It's all about the pitmaster.

I had lunch at the Hagerstown location once. The food was pedestrian. And both other patrons and staff behaved rudely toward me when I didn’t interrupt my meal at noon like they all chose to do.

Congratulations public-redux! First negative post of the day! And as a bonus, it makes little sense! What does "when I didn’t interrupt my meal at noon like they all chose to do" even mean? Also, I can't imagine why they might have "acted rudely" towards you...

At noon Mission plays the national anthem and everyone stands. Everyone at the Hagerstown location has always been super polite - was there Sunday.

Thanks for the clarification and confirmation of public-redux' classy nature, Kville.

Everyone who wants to stands. No one is forcing them to.

Don't spread the word on the anthem or the Burn Loot and Mayhem crowd will go there to protest and try to make the diners take a knee or give the BLM salute. [lol][ninja]

I have been to MBBQ hundreds of times in Ellicott City over the years. Great food and service. Always saw everyone stop what they are doing and stand at Noon. No exceptions.

Anyone who does not, or would not, is simply an ass. Period. Unfortunately, people fight wars, run our fire departments and ambulance services, and serve as first responders for folks like public-redux, as well as folks who believe in honoring our heroes like me.

Public-redux, you and your ilk just stay away from MBBQ. Just hit up a Taco Bell. Would make us both happy.

Odd that you get so hot and bothered by people enjoying their freedom.

Interesting that a conservative is so into conformity. I thought that conservatives were about freedom and not conformity but I guess I am mistaken.

You might want to check out the research by Robert Altemeyer on authoritarianism.