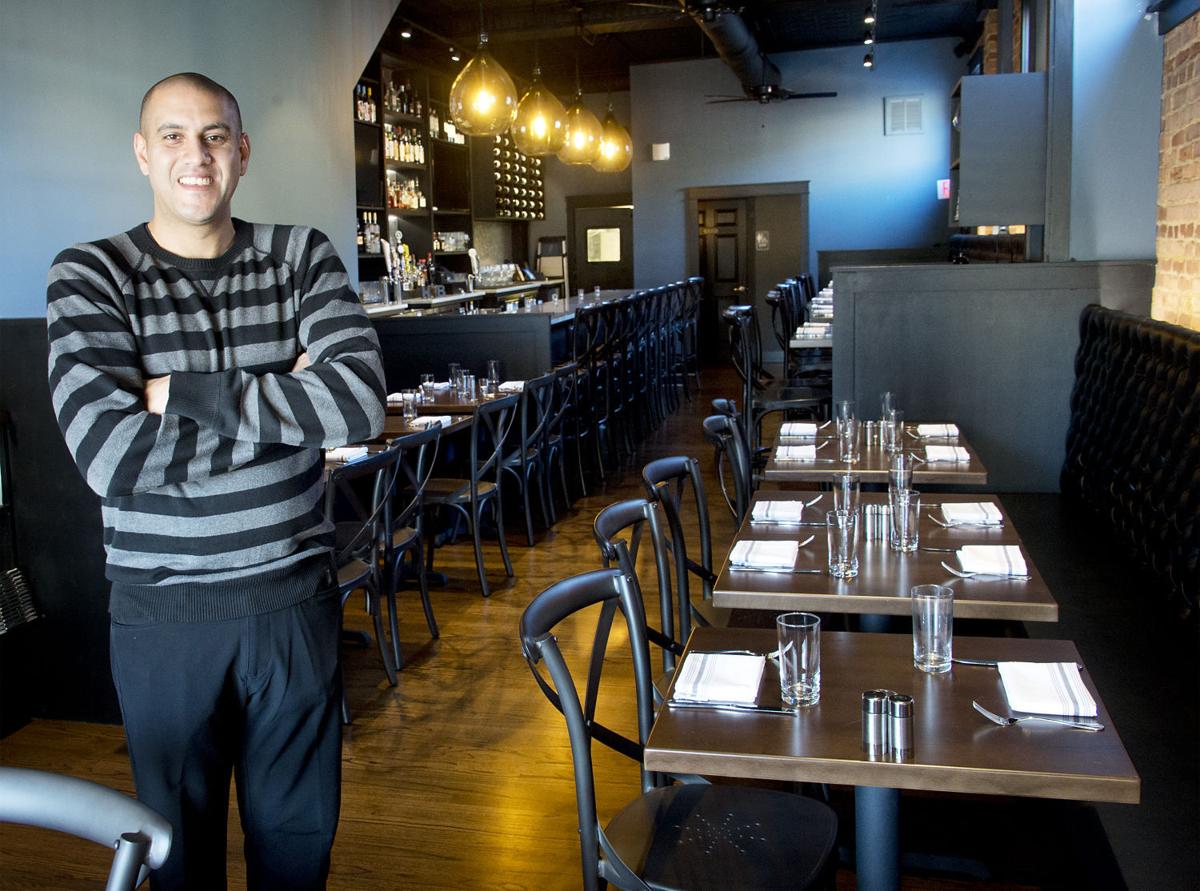 Sherif Salem is the owner of Hootch and Banter, a new restaurant and bar at 49 S. Market St. in downtown Frederick. 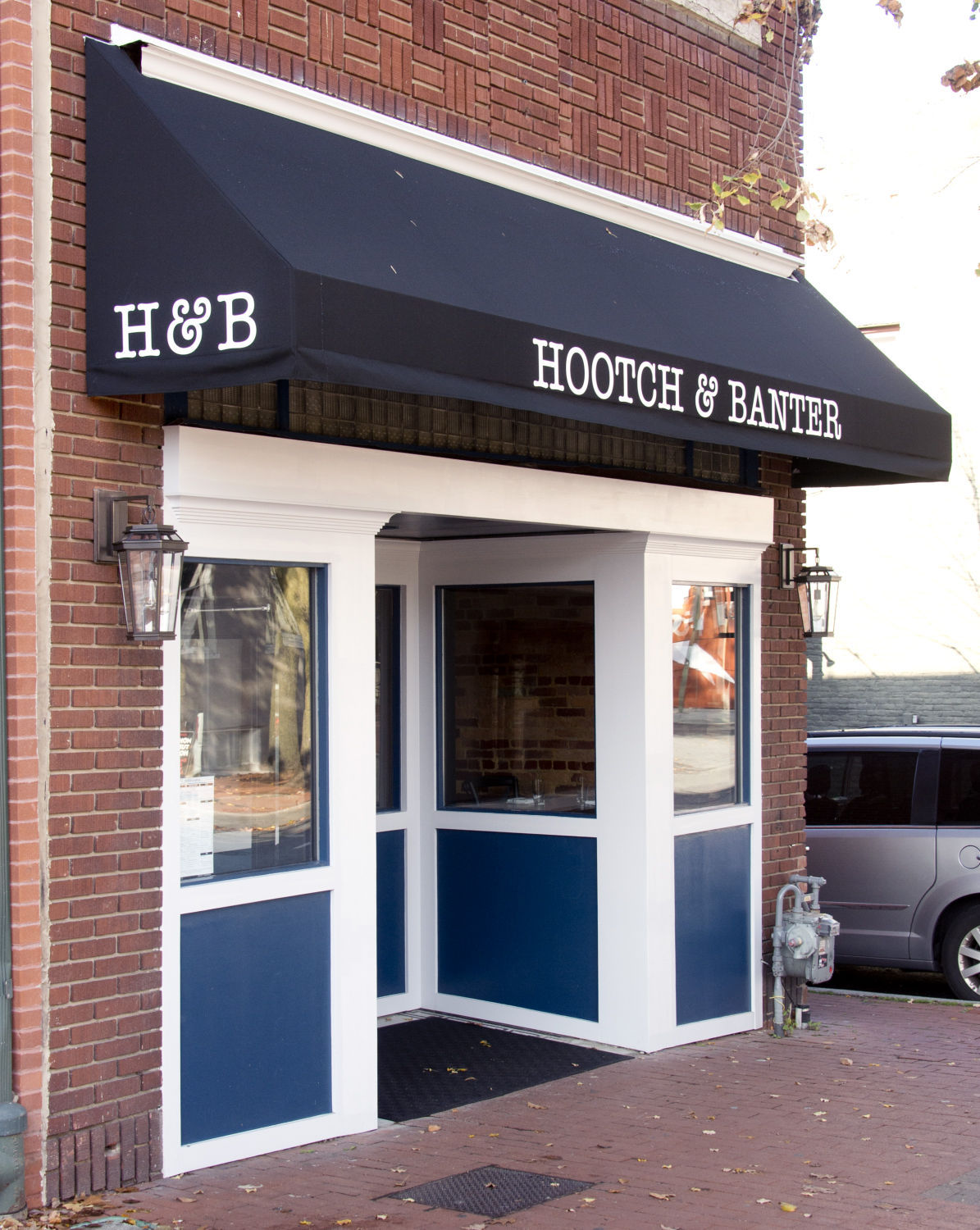 Hootch and Banter is a new restaurant and bar at 49 S. Market St. in Frederick.

Sherif Salem is the owner of Hootch and Banter, a new restaurant and bar at 49 S. Market St. in downtown Frederick.

Hootch and Banter is a new restaurant and bar at 49 S. Market St. in Frederick.

Sherif Salem didn’t necessarily plan to open his own restaurant.

But if he did, he knew what he’d call it.

“I call my wife ‘the banter,’” he said. “She’ll talk and tease me a lot. So I always told her I’d name a restaurant after her.”

Salem made good on his promise this summer after purchasing a vacant downtown property with plans to open a restaurant. But his wife, Cherie Nearman, thought “The Banter” was a bit lacking.

“She added ‘hootch,’” Salem said. “So it’s like alcohol and talking.”

Hootch and Banter opened Nov. 5, bringing new life to the South Market Street building long known to locals as Kidd’s Cafe and then The Canal Bar and Grill. That restaurant closed shortly after its owner, Charles Kidd III, died in December 2014, The News-Post previously reported.

Salem and Nearman purchased the 49. S. Market St. property for $600,000 in July, according to state property tax records.

They spent then next three months pouring time, energy and funding into transforming the space from a casual family restaurant into what Salem described “a cool, old-style New York bar.”

With Nearman’s vision and the construction expertise of her brother, who recently launched his own business, layers of paneling and drywall were ripped off to expose bare brick walls. The drop ceiling was removed, showing off the vaulted ceiling in its place, and flooring was torn up to reveal original wood.

Dark wood tables, high-backed black leather booths and an attention-grabbing bar at the back of the room were added, built by local craftsmen and family members.

The menu and array of cocktails, wine and liquor also emphasize fresh and local offerings, such as Flying Dog beer, Salem said. They also plan to tap into the specialties of other downtown businesses, such as Crisafulli’s Cheese Shop, to fill their cheese and charcuterie plate.

Salem named the chef’s crabcakes as his favorite. But with a background in steakhouses — he previously worked as manager for the Washington location of Bobby Van’s Steakhouse — he can’t turn down the New York strip steak, either.

The menu also features a variety of vegetarian and gluten-free options, which Salem confirmed are truly prepared gluten-free since his wife has Celiac disease, which makes her intolerant of gluten. And, as tribute to the former owners and their longtime family business, there’s a “Kidd” burger.

There will also be an enlarged photo hung on the wall showing the original Kidd’s Cafe circa the 1950s, including Charles Kidd’s father and grandfather.

“We met the family when we came down here,” said Salem. “We knew we wanted to do something in honor of them, to keep a piece of what people remember this as.”

Many of the customers who paid a visit to the new restaurant in its first week were former patrons of the Kidd family restaurant. They’ve commented on the new appearance, Salem said. So far, the feedback has been positive.

“Everybody has really welcomed us,” he said. “They’ve all been super supportive.”

Members of the downtown business community were happy to have a new restaurant, too.

Kara Norman, executive director of the Downtown Frederick Partnership, wrote in an email that the organization was “thrilled” to welcome another option to downtown’s growing dining scene.

“The more, the merrier,” he said. “They do a little different thing than we do, so we’re not competing.”

To Salem, Frederick’s friendly, close-knit community seems far different from the climate in Washington where he worked previously, and his wife still commutes for her job as an emergency room nurse at George Washington University Hospital.

Frederick is unlike anywhere else, Salem said. And he would know. The New Jersey native spent eight years traveling across the country as part of the corporate team at Smith and Wollensky, where he worked before starting at Bobby Van’s.

With their move from Arlington, Va., to the Ballenger Creek-area, Salem and Nearman plan to grow their family beyond themselves and their 10-year-old pit bull mix, Jordie.

“We’re ready to start a family, to settle down, and Frederick is just the perfect place for that,” Salem said. “It just sort of seems meant to be.”

More information: The business' website will also launch soon. Until then, information is available through its Facebook page, facebook.com/hootchandbanter or by calling (301) 732-4971.

My wife and I had drinks and appetizers there tonight. The staff were friendly and efficient. The bar manager was very attentive without being intrusive. Nice vibe to the restaurant. I had chicken wings; they were excellent and my wife had the meat and cheese plate. The parma ham and cheese selection was excellent! Presentation of both our appetizers was very pleasing. I'd call the atmosphere "casually sophisticated." The owner spoke with us. He was excited to have his new business in Frederick and thanked us for coming. Prices were very reasonable for what we had. In sum, we'll be back.

After looking at the décor, I'd be willing to guess that it will be difficult to have a conversation there. Little sound-absorbing surfaces and in today's world, people tend to be very loud when they are dining and drinking.

Here's an idea, instead of idle speculation, why don't you do have a meal there and then report back.

This one falls under the it's none of my business, but where does a young couple like this, who both have good jobs, but certainly not jobs that would make you rich, get $600,000 dollars?

Yeah, mikec, this one is definitely none of your business. If you think it is, why not get off your butt, go down and spend some money at the place, and ask them how could afford to buy it. You'd probably get the Nosy Nellie discount! Jeez. Unbelievable.

it isn't a formal place, white table clothes are so passe for casual establishments.

What a great looking place! Convenient parking at the Patrick St. deck, take a stroll along the creek afterward. What a great addition to that part of town.