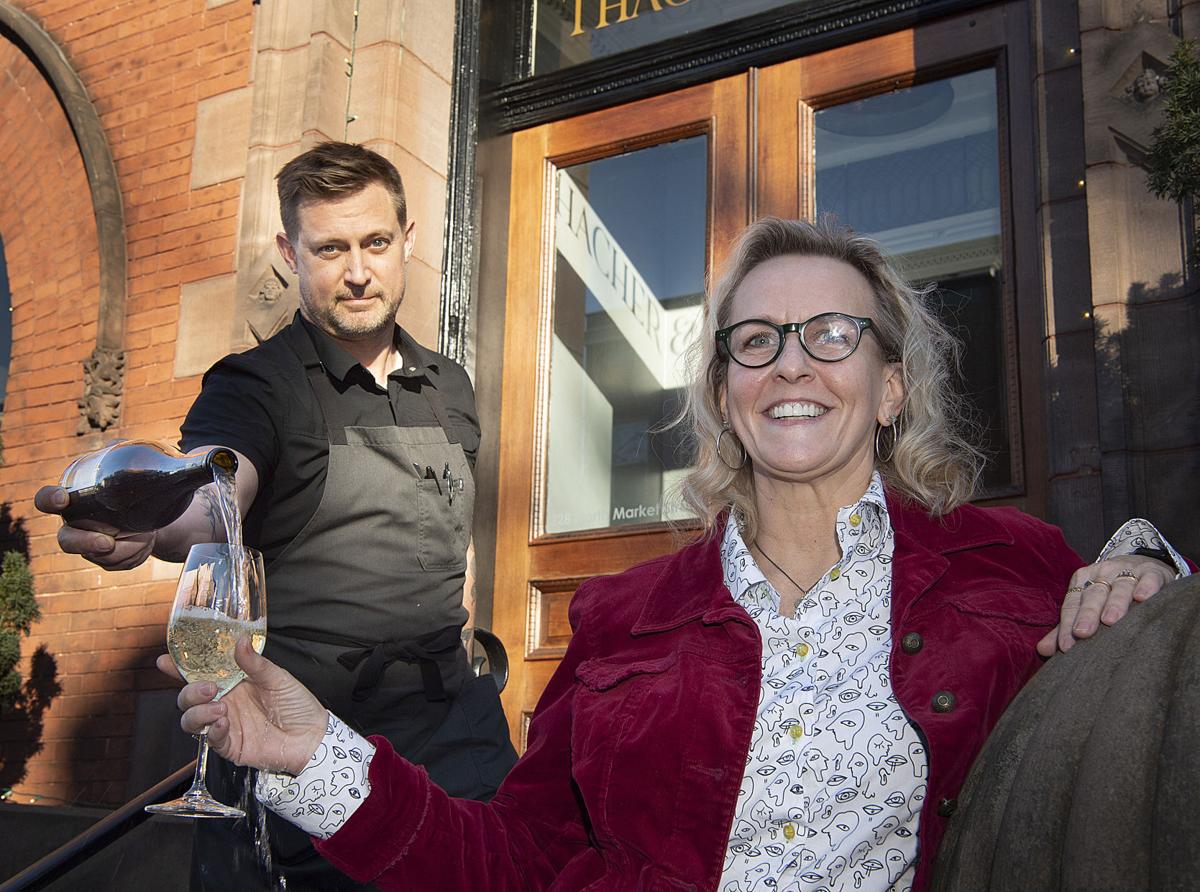 Thacher & Rye on North Market Street has launched a new series called Love Local Wednesdays. The restaurant will serve a three-course meal paired with drinks from local breweries, distilleries and wineries. It will feature a different local business every week. Executive Chef Bryan Voltaggio, left, and owner Carrie Delente pour a glass of wine from nearby Big Cork Vineyards. 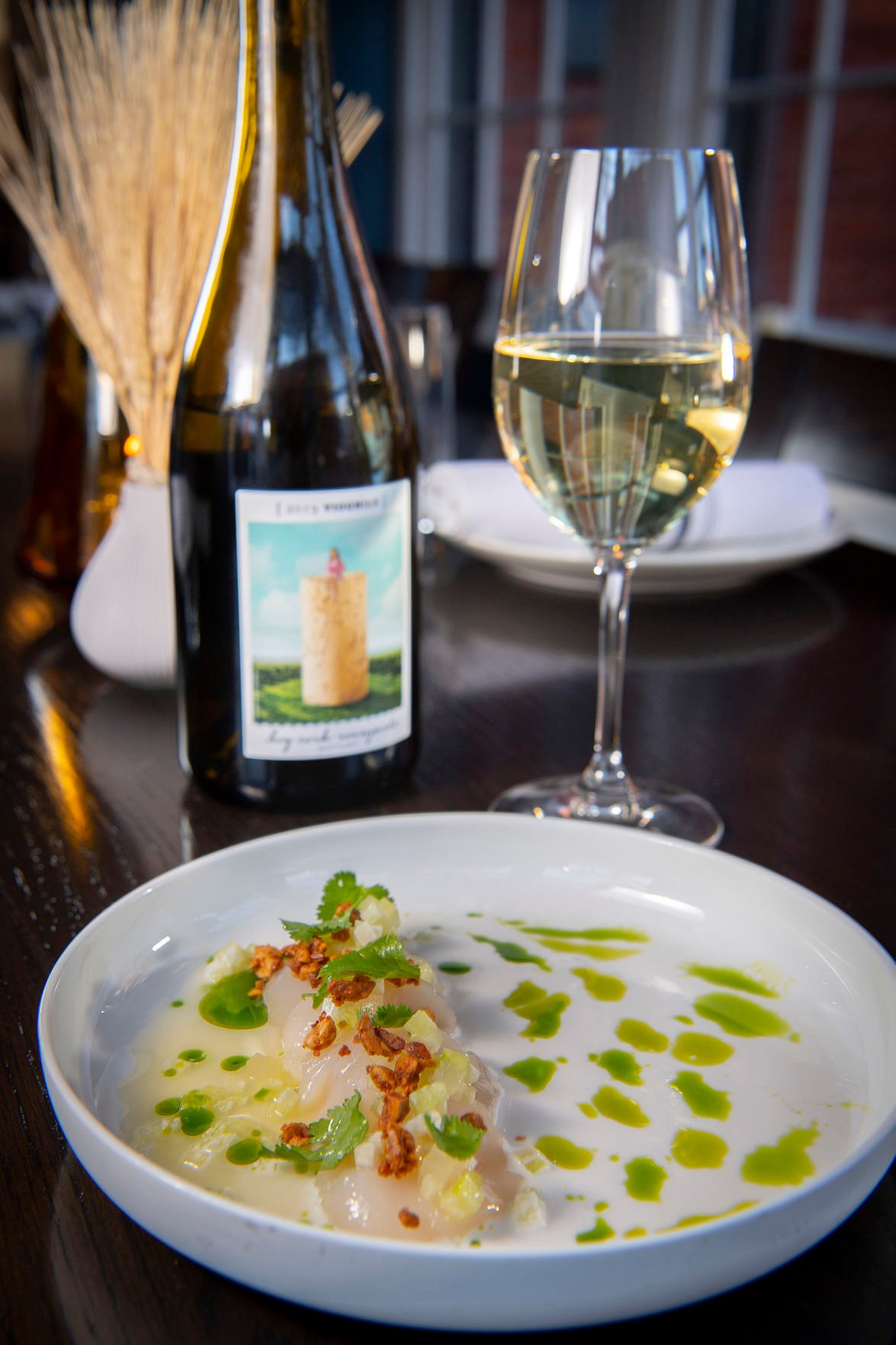 Thacher & Rye on North Market Street has launched a new series called Love Local Wednesdays. The restaurant will serve a three-course meal paired with drinks from local breweries, distilleries and wineries. It will feature a different local business every week. Executive Chef Bryan Voltaggio, left, and owner Carrie Delente pour a glass of wine from nearby Big Cork Vineyards.

Thacher & Rye is giving local residents a reason to get out of the house: to support local breweries, distilleries and wineries and enjoy a three-course meal — all at the same time.

The North Market Street restaurant’s new Love Local Wednesdays series highlights a different local craft beverage business each week. Each of the three courses comes with a drink pairing from the featured business, be it a beer, wine or a cocktail, said Chef Bryan Voltaggio.

“Wednesday nights are typically a night where we’re looking to not only support local but also have local clientele, because obviously the weekends you might have some transient business come in from other areas,” Voltaggio, a former “Top Chef” runner-up, said. “This is all about a community effort.”

Carrie Delente, owner of Thacher & Rye, said she’s spoken with many of the guests on Wednesday nights who say the dinner is helping them discover local businesses in and around the county. One couple, she said, had recently moved from Annapolis and was excited by all the different offerings in Frederick.

“For them it’s like an education on what else is around the area,” Delente said. “I thought that was really interesting.”

So far, the restaurant has partnered with Catoctin Creek Distilling Company in nearby Purcellville, Virginia, and Sugarloaf Mountain Vineyard in Dickerson. Love Local Wednesday dinners are currently planned through April, featuring businesses such as Monocacy Brewing of Frederick, Big Cork Vineyards in Rohrersville, Attaboy Brewery of Frederick, Denizens Brewing of Silver Spring, Flying Dog of Frederick and McClintock Distilling in Frederick.

Braeden Bumpers, co-founder of McClintock Distilling, said he was happy to join in on the series.

“I thought it was a really cool way to highlight all the amazing alcohol and food and everything that’s being produced in the local area,” he said. “We love working with those guys in general because they have such an interesting take on pretty much everything that they do.”

In addition to the fulfillment supporting local businesses brings, Voltaggio said the series is a new challenge for the staff.

“It’s fun for us, too,” he said. “There’s also that part of it, the artistic side of it, being able to create new dishes and making these pairings available.”

Voltaggio said a special dinner is being planned for Frederick Restaurant Week in March. The chef said during that week every item on the menu will list a suggested pairing specifically from a Frederick County craft beverage maker.

The feedback so far has been great, Delente said. She said she’s paid attention to the way the economy has shifted to “experiences” in the past few years, with businesses such as escape rooms and hatchet-throwing venues surging in popularity.

To her, that’s what Love Local Wednesdays is all about — offering an experience to the customers during a time when there isn’t much else going on due to the COVID-19 pandemic.

“I just need something to drive me to leave the house because we’re at home so much,” Delente said. “So I think that these kinds of special things, where we’re partnering with local businesses, that’s a great reason to come out.”

Reservations are recommended, but the restaurant has also allowed walk-ins to enjoy the special dinner. The menu is available both indoor and outdoor in the restaurant’s heated tent seating. It comes at a fixed cost of $65, with the paired drinks included.

He has been on a very popular food show several times. Local boy makes good. Jessie Graf is another who makes the pages from time to time. All good for Frederick.

Is any one, besides me,sick of hearing about Bryan Voltaggio and his reincarnations🤦🏻‍♀️?

Yes, but that is probably because I am not into fancy food and cooking competitions. If I was a foodie, I might have different opinions, as I think a lot of people come to Frederick because of his restaurants.

I’m happy for anything that helps local brewers,wineries,,etc, but this is not an original idea in Frederick. The Roasthouse Pub has been doing these dinners partnered with local brewers for years.

That would be my point. Where is their front page advertisement? Everytime Voltagio coughs the FNP is right there to wipe is chin.

Give 'em a break. It IS a little bit of real news that they're doing this buy-local schtick. I personally don't care where stuff is made, but it does give many people a warm and fuzzy feeling to think they are supporting a local merchant. And we can do with more warmth and fuzziness can't we.

Can this guy get any more free advertising?