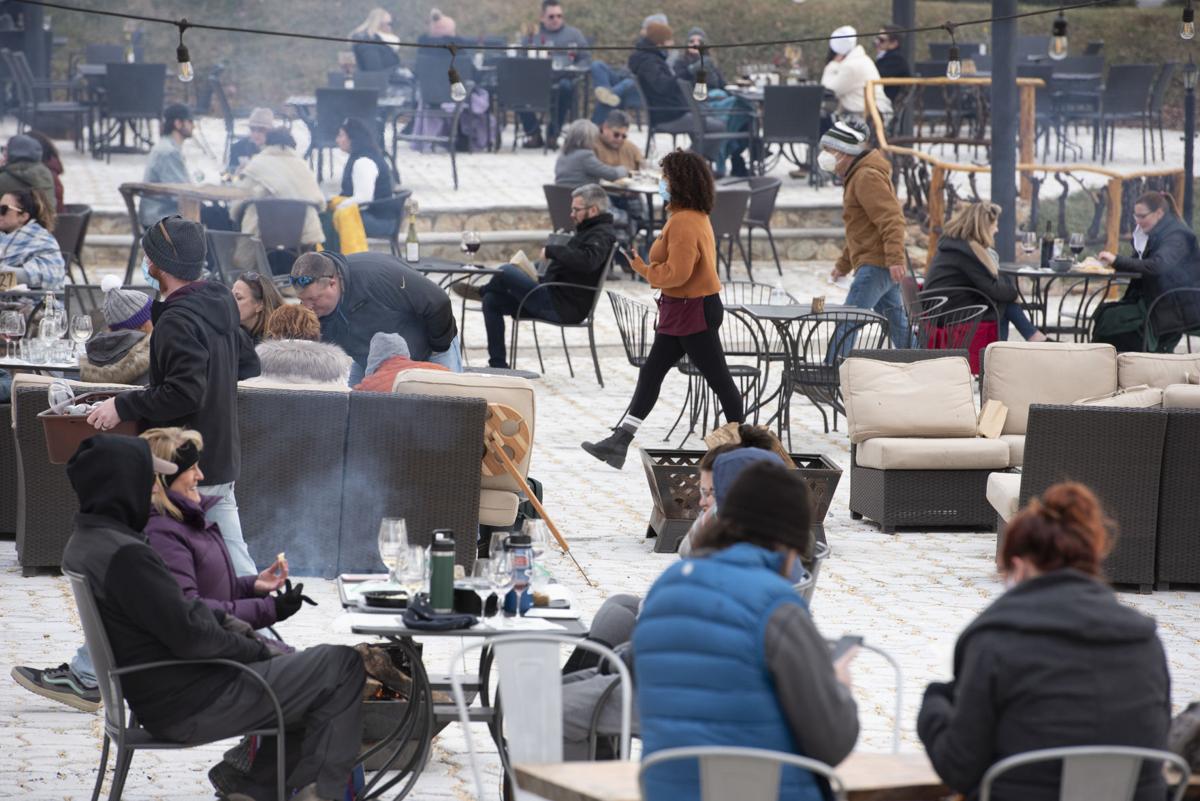 With fire pits, a spacious patio and even blankets to borrow, patrons take advantage of mild weather at Black Ankle Vineyards near Mount Airy on Jan. 16. 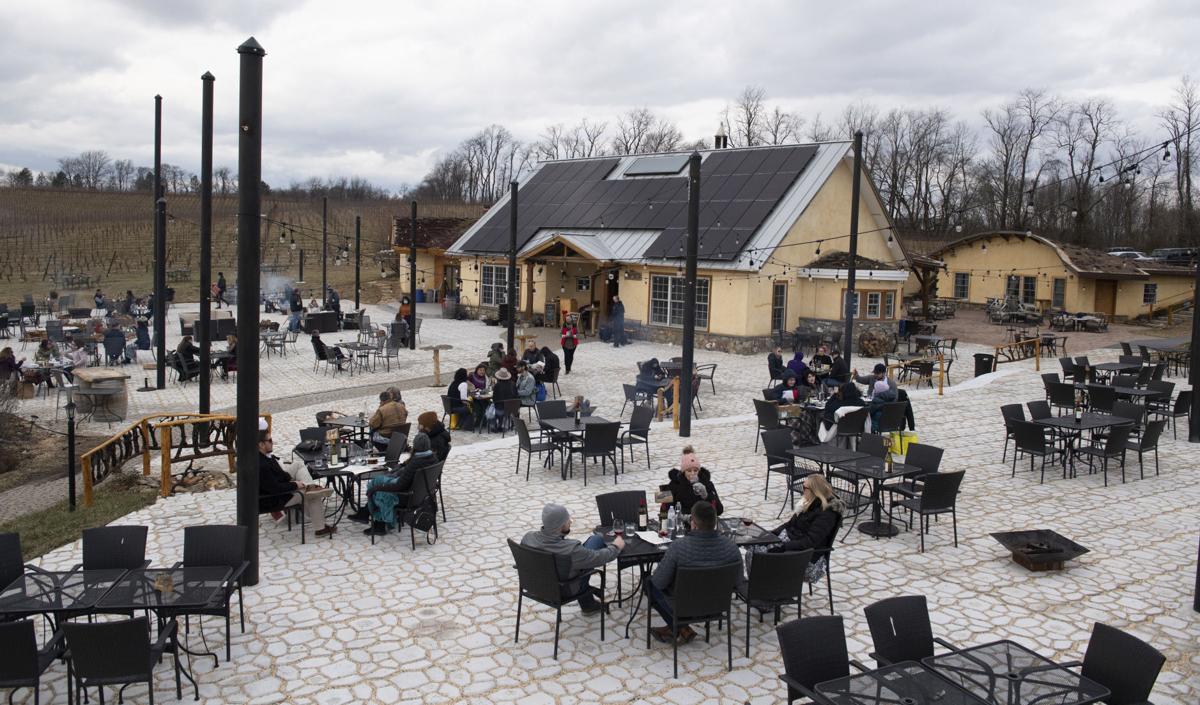 Crowds have continued to show up at Black Ankle Vineyards near Mount Airy. 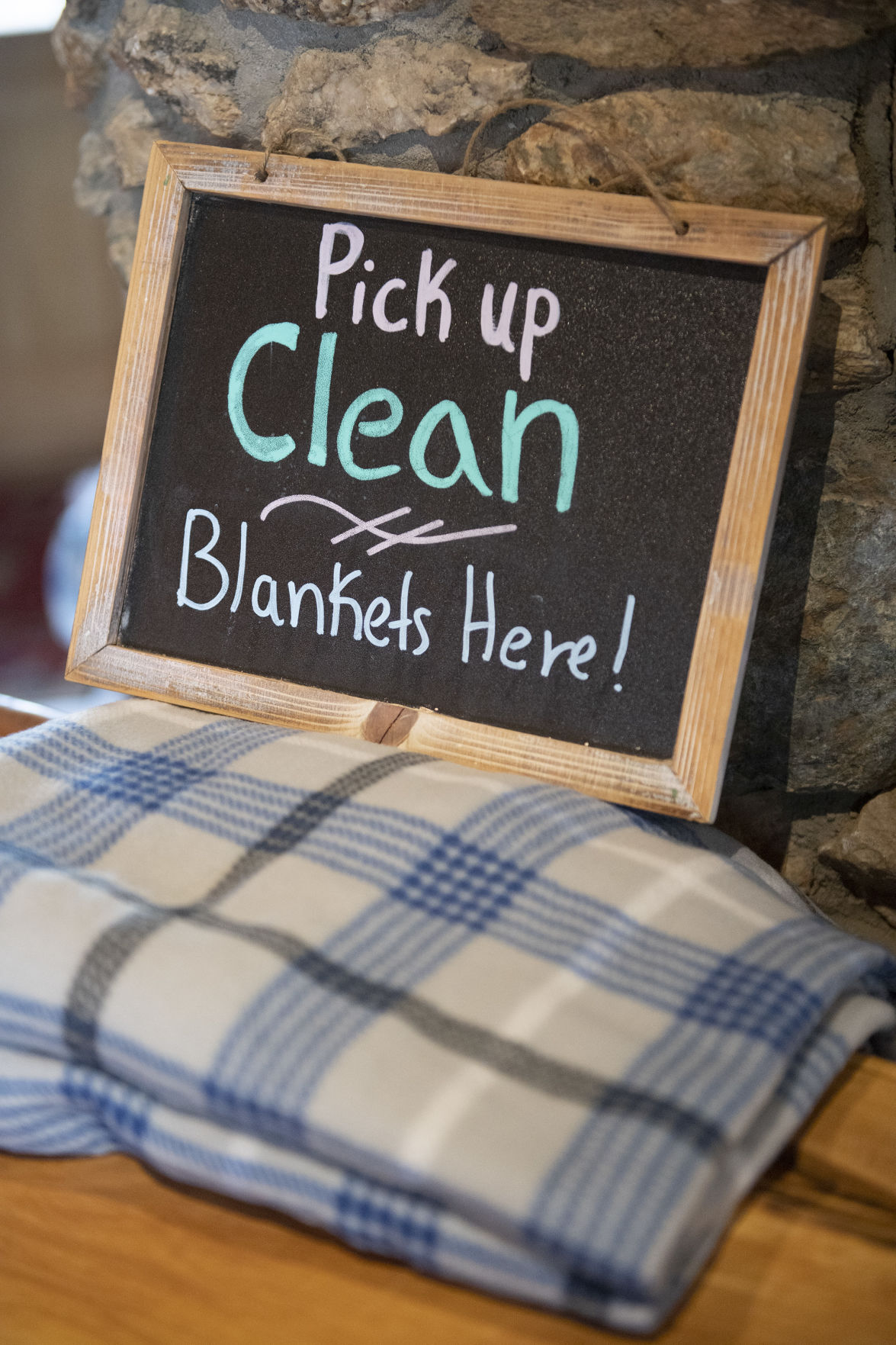 With fire pits, a spacious patio and even blankets to borrow, patrons take advantage of mild weather at Black Ankle Vineyards near Mount Airy on Jan. 16.

Crowds have continued to show up at Black Ankle Vineyards near Mount Airy.

Melissa Schulte is used to seeing people bring their laptops to Black Ankle Vineyards in the middle of the day on a Wednesday, even in these brisk winter months.

But it’s not something the winery’s general manager would have expected to see a year ago — Black Ankle wasn’t even open on Wednesdays a year ago.

The COVID-19 pandemic has changed all of that. Wineries around Frederick County have had to adapt their business models from intimate tastings to bottle sales and home delivery. Opening during the week has allowed some wineries, such as Black Ankle in Mount Airy, to take advantage of the work-from-home crowd and those who don’t want to face the public on a busy weekend.

“People are bringing their own super cold weather gear almost like you’re at a ski resort, and you’re around your own fire pit,” Schulte said.

Now that it’s colder out, most wineries have added fire pits or patio heaters to their expansive outdoor seating. The space to spread out has served wineries well throughout the pandemic.

“We are very thankful for that. We have so much space outside, so we’re able to accommodate people without sacrificing that six-foot spacing and all that,” Larason said.

Dan Kennedy, sales and marketing manager at Orchid Cellar Meadery and Winery in Middletown, echoed that statement. The business has allowed customers to sit wherever they like on the 15-acre property if they bring their own chairs or blankets. He said they can probably have about 500 people on the property, even with restrictions in place. Instead of standing at the counter and trying different products, customers are buying a couple of bottles and taking them with them, limiting the amount of contact between employees and customers.

Black Ankle has switched to a reservation-only policy, so people can pick a table with a fire pit if they want and know they have their own space waiting for them. Schulte says they plan to keep reservations long into the future.

“One of the issues that happened before the pandemic was we had a lot of customers who would say that they wanted to visit but decided not to because they knew it was beautiful day, and we would be so busy that they wouldn’t get a table,” she said.

Wine to-goAnother benefit for many Frederick County wineries was the transition from tastings to bottle sales, often online. An executive order from Gov. Larry Hogan allowed wineries, along with breweries and distilleries, to deliver straight to the customer.

Garry Cohen, owner of Mazzaroth Vineyard in Middletown, said the change allowed them to optimize the “direct-to-customer” aspect of their business model. Since the vineyard’s start in 2017, its focus has been on sales through multiple channels, including direct-to-customer, farmers markets, liquor stores and restaurants.

“Obviously restaurant sales for us have gone down significantly, but the rest of our sales have not,” Cohen said. “We did not ever want to put all of our sales in one distribution channel ... that was our plan, and COVID just reinforced that we’re doing the right thing in terms of that strategy.”

Orchid Cellar was already using a service called Vino that helped them ship their wine, which often requires special permits and licenses in different states. Since they sell mead, a relatively niche item, they were able to capitalize on people buying from all over the country.

“I’m sure the people that are buying from us have never come to see us,” Kennedy said. “But at least they can get something to their doorstep in just a few days.”

Black Ankle also delivered personally to Frederick County at no extra cost, and it’s still shipping for a flat $8 fee. Schulte said it was a great solution for giving their part-time employees hours so they wouldn’t have to lay them off. Online sales really began to boom, she said, with the help of their wine club.

“Anytime that I sent an email out saying, ‘Hey, we have this new release, or we have just a little bit of this left,’ our members just bought it in droves,” Schulte said. “That was wonderful and so helpful.”

Additionally, Black Ankle and Orchid Cellar both switched from tastings to flights, so customers could take their drinks to their table and drink at their own pace rather than having to take their mask off in front of an employee.

“You still get the wine education piece, but it’s kind of all given at once. I think we’ll probably continue to offer the flights,” Schulte said. “We would love to one day get back to doing the tasting bars just because that’s such a nice part of the winery experience.”

Seeing success, safelyFor many wineries in the area, sales have actually gone up during the COVID-19 pandemic. Cohen said Mazzaroth, a small winery, had a bigger year than ever, which was partially because its vines have matured and could produce more fruit this year. Social media and farmers markets really took off this year, too.

Kennedy said Orchid Cellar was pretty well attended throughout most of the warmer months of 2020 once outdoor seating opened up. Larason and Schulte said the same about Catoctin Breeze and Black Ankle.

“It was actually significantly more busy,” Kennedy said. “We jokingly call 2020 the best worst year ever.”

He realizes winter will probably be slower than usual, since even with the fire pits and indoor seating available, people might not be as willing to come out.

“I do think that there’s gonna be a lot of pent-up demand. As soon as we hit that nicer spring weather, the number of people that are gonna be dying to get out of their homes and just enjoy some nice safe outdoor spaces where they can have a nice drink, I think we’ll more than make up for it,” he said.

Looking back at the past year, Schulte is proud of the way Black Ankle has optimized virtual tastings while canceling in-person events. The new table service, where people can order from their phones rather than at a counter, has also helped people feel more comfortable.

At the end of the day, the customers’ safety is most important, Schulte said.

“It’s been a tough year for everybody. We were really supported by the community around us and so thankful to be where we are,” Schulte said. “We’re gonna try to just keep everyone safe. That’s our number one goal.”