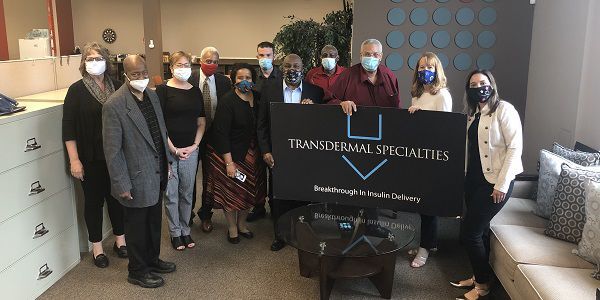 The staff of Transdermal Specialties Group is welcomed by the Frederick County Office of Economic Development. 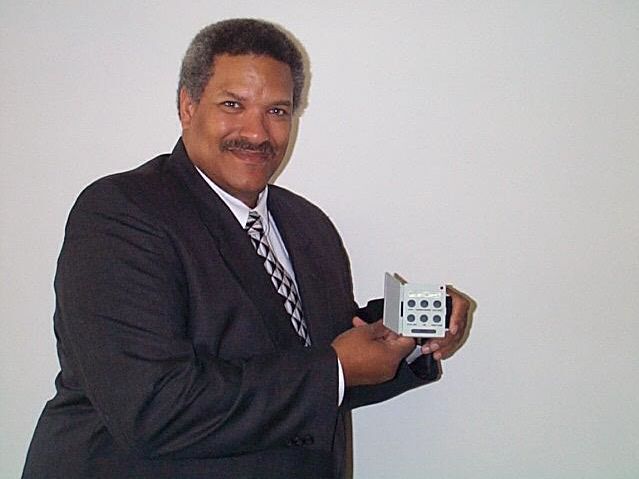 CEO Bruce Redding with the U-Strip device, which will administer insulin to diabetics through a patch.

The staff of Transdermal Specialties Group is welcomed by the Frederick County Office of Economic Development.

CEO Bruce Redding with the U-Strip device, which will administer insulin to diabetics through a patch.

Bruce Redding is the inventor of ultrasound microcapsule technology that has helped build space shuttles, given flavor to Fruit Roll-Ups, and in his own words, made Hamburger Helper "not taste like cardboard."

Now, that microcapsule technology is doing something completely new: administering insulin to diabetics through a transdermal patch.

Transdermal Specialties Global (TSG), a Frederick company of which Redding is the CEO, is currently in phase three of having their transdermal insulin patch approved by the Food and Drug Administration. When it's approved, it could help up to 30 million type two diabetics in the United States alone.

There is currently no way to administer insulin to diabetics except injections, since insulin is a large molecule. Hence, insulin can't be taken in a digestible pill form or a patch, like a nicotine or birth control patch. Transdermal Specialties Global's U-STRIP would be the first product of its type.

TSG relocated to Frederick in the middle of March, right before they had to shut down due to the COVID-19 pandemic. Redding's friend had a laboratory space they weren't using and offered half of it to TSG, giving them more space than they previously had in their Philadelphia base.

"Our ultrasound is unique. We have two wave forms: a sawtooth wave which opens your pores. And a square wave which pushes the drug into the skin," Redding said. "So it's a combination ultrasonic waveform. You can't feel it. ... Most people can't hear it."

Redding did say, however, that dogs will be able to hear the device if they are close by.

With the help of a small pager-sized device that can be worn on a belt, diabetics will be able to simply set their weight and glucose meters and then push a button when they plan to eat. The patch will administer four units of insulin before or after their meal to counteract the carbohydrates in the food.

This is different from the current process of figuring out the carbohydrate intake of the meal ahead of time.

"Nobody remembers to do that. In reality you're supposed to go 20 minutes ahead and inject yourself with insulin," Redding said. "In this case, you just press what's called the bolus button and it automatically delivers a dose."

The coronavirus has changed the way some drugs are being tested, which has thrown a loop in TSG's plan to get FDA approval. Usually a phase three test would require a 90-day trial. But because a trial of that length would require volunteers to come in and out of testing facilities multiple times, potentially spreading COVID, the FDA has lowered that requirement to a 14-day "time in range" test, where volunteers stay in one facility.

The company decided to build out their own clinic on Thomas Johnson Drive to conduct their first trial, before taking it to medical institutions such as Johns Hopkins and Harvard. The first trial will include six diabetic men and will be conducted in January.

All volunteers must receive a negative COVID test before entering the trial. They will be required to stay in the facility for 14 days, and will have their meals catered and a nurse on call in case of emergency.

"We've even put table tennis in one of the side rooms and a pool table, you know anything to keep them occupied while they stay there," Redding said.

Volunteers will be reimbursed for their time.

Later in the spring, TSG will be traveling to Korea to test their product there. They can have the patch approved by the end of 2021.

"I think Korea's had less than 500 people die from COVID in the last year, so it's the place to go now for clinical trials because you don't have to worry about COVID infections," Redding said. He and his team will have to quarantine after arriving in the country and after leaving.

Redding estimates a 2022 launch of the insulin patch in the United States.

"He feels a tremor coming on, he would wear this device, he would press one button, which would turn it on," Redding said. "The second button it delivers a dose of drug called apamorphine which knocks down the tremors in the first hour. Then it goes to a lower dose every hour thereafter."

"The problem with the needle is you have to remember when to take your dose, with the strip, you just time it in, it'll automatically do it," Redding said. "And you don't risk any infection because it's a patch there's no needles stuck in you."

If you are interested in joining the January insulin patch study, visit tginsulintrials.com for more information.