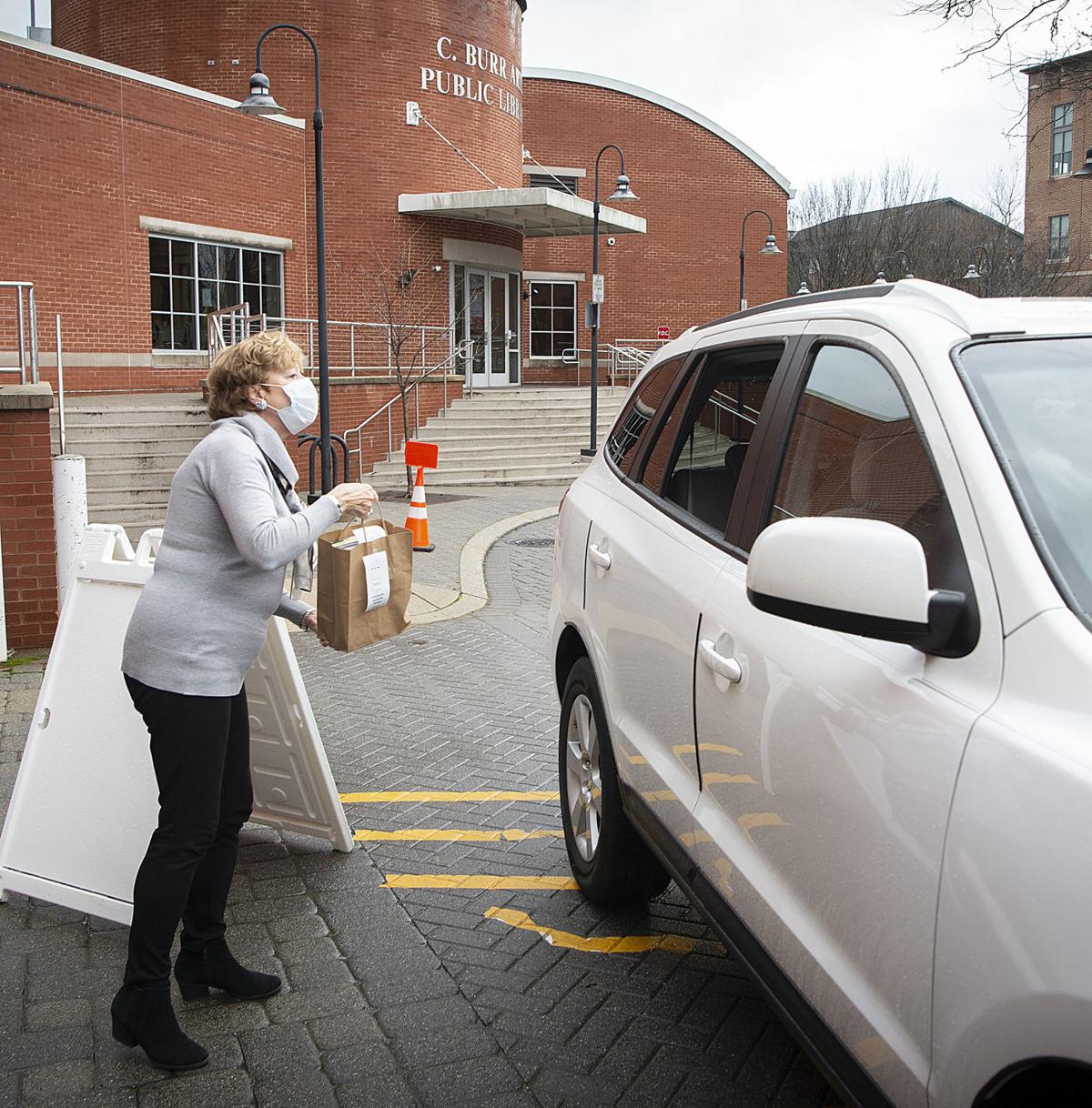 Frederick County Public Library patrols can order materials online and drive by a branch to use curbside pickup. Library technician Susan Kloc is shown delivering an order of books to a patron on Monday afternoon at the C. Burr Artz Library in downtown Frederick. 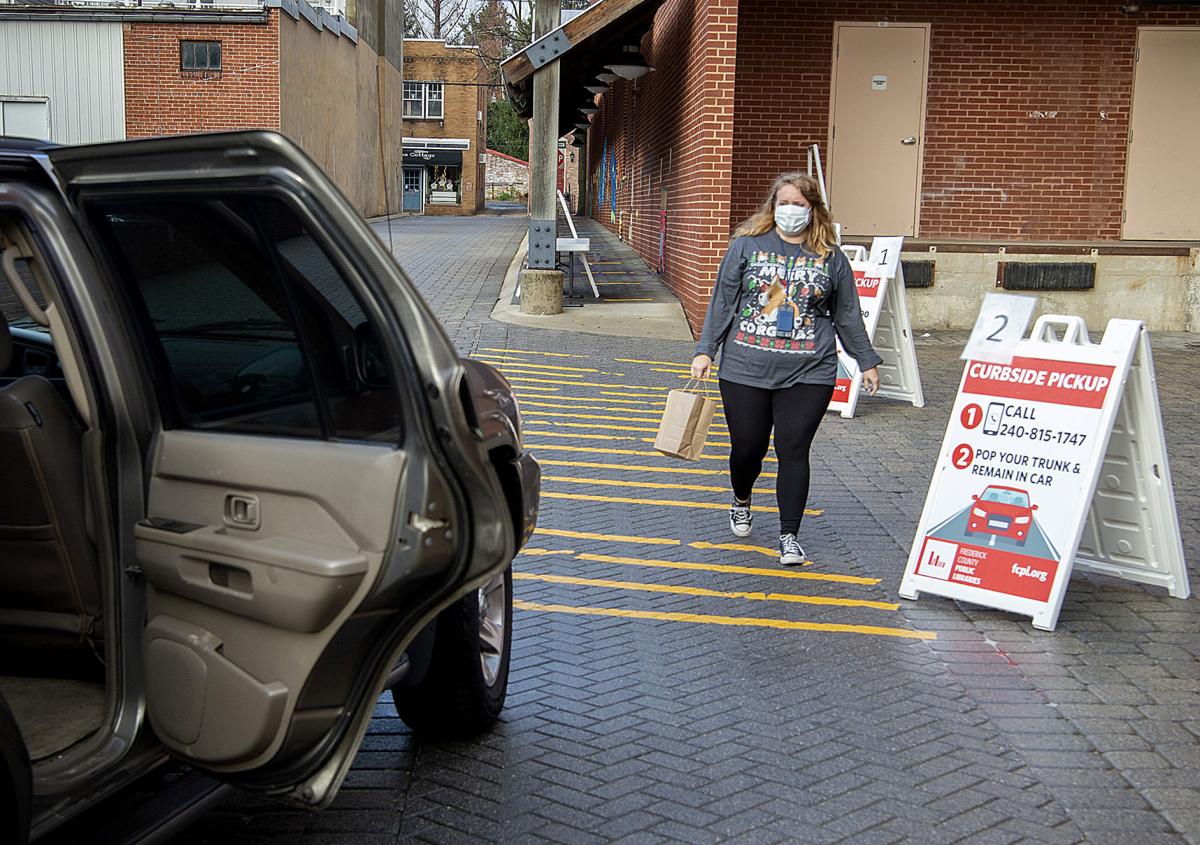 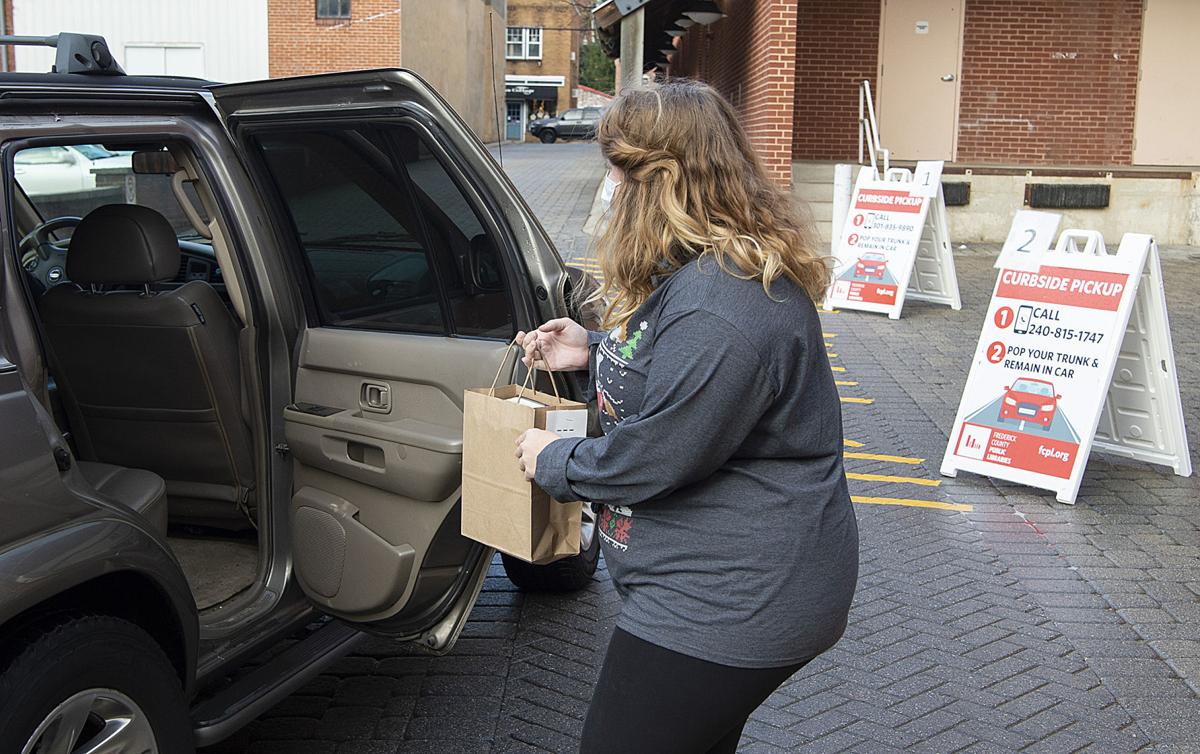 Frederick County Public Library patrols can order materials online and drive by a branch to use curbside pickup. Library technician Susan Kloc is shown delivering an order of books to a patron on Monday afternoon at the C. Burr Artz Library in downtown Frederick.

Ten months into a global pandemic, local libraries are continuing to serve the community while adapting to constantly evolving needs and circumstances.

All nine branches of Frederick County Public Libraries are in a tiered reopening, meaning that visitors cannot go inside the library, but curbside pickup, virtual programs and help from staff are still available.

“We’ve made many changes since our doors closed in March,” said Samantha Jones, communications manager for FCPL. “Most notably is obviously our curbside pickup, which launched on June 1 once the stay-at-home order had been lifted and we understood how we could better serve our community.”

FCPL has had more than 45,000 curbside pickup appointments, with more than 254,000 items circulated since the program launched.

FCPL was quick to pivot in March. The day after their doors closed, Jones said, they had their first virtual program. Since then they’ve had more than 600 virtual programs, with more than 19,000 attendees.

FCPL also launched the Learning From Home initiative when library officials knew students would have to continue virtual learning.

“We have specialized virtual programs to help guide families through the different challenges that they’re finding in a virtual learning environment,” Jones said.

Databases have also been updated to include a system called Brainfuse, which has online, bilingual tutoring available seven days a week. Brainfuse launched in September, and since then, FCPL has had more than 2,700 student sessions using the service.

In the early weeks of the pandemic, FCPL expanded its digital catalog by almost 100,00 titles and increased checkout times.

Maryland Library Association President Morgan Miller referred to libraries as “a really important touchstone” for many patrons, according to a Capital News Service report.

According to Pew Research Center survey data from 2016, more than half of respondents indicated that libraries helped them get information that helps with making decisions, grow as a person, learn new things and find information that is trustworthy and reliable.

Libraries also provide crucial resources, such as educational materials, computer access and even shelter to their communities. In this way, Miller described libraries as acting as a form of “social safety net,” according to CNS.

Jones said libraries are an important asset to every community — and especially in Frederick County.

“Our mission statement is that we help [the public] to explore, to invent and to transform, and we see it as our duty to help them do that, whether they’re in our branches or not, especially during this time,” she said.

It’s been hard on library staff not to see customers on a regular basis, Jones said, but FCPL knows the need is still there.

“Our staff loves this community and really want to do whatever they can to make this time easier for everyone, whether that’s through services for students or parents who are dealing with students learning from home, because that’s just as hard. We just want to be there for the community,” she said.

Even though the need for basic life services is of primary concern, I would like to thank the Frederick News-Post for highlighting the public …

Applause also to Curious Iguana and Wonder Books who have found alternate ways to keep business open to the public this whole time.

Our public libraries are awesome.

The staff at Thurmont Library is awesome! I am so glad they are there for all of us readers! Can;t wait for them to reopen, but for now it's all good!