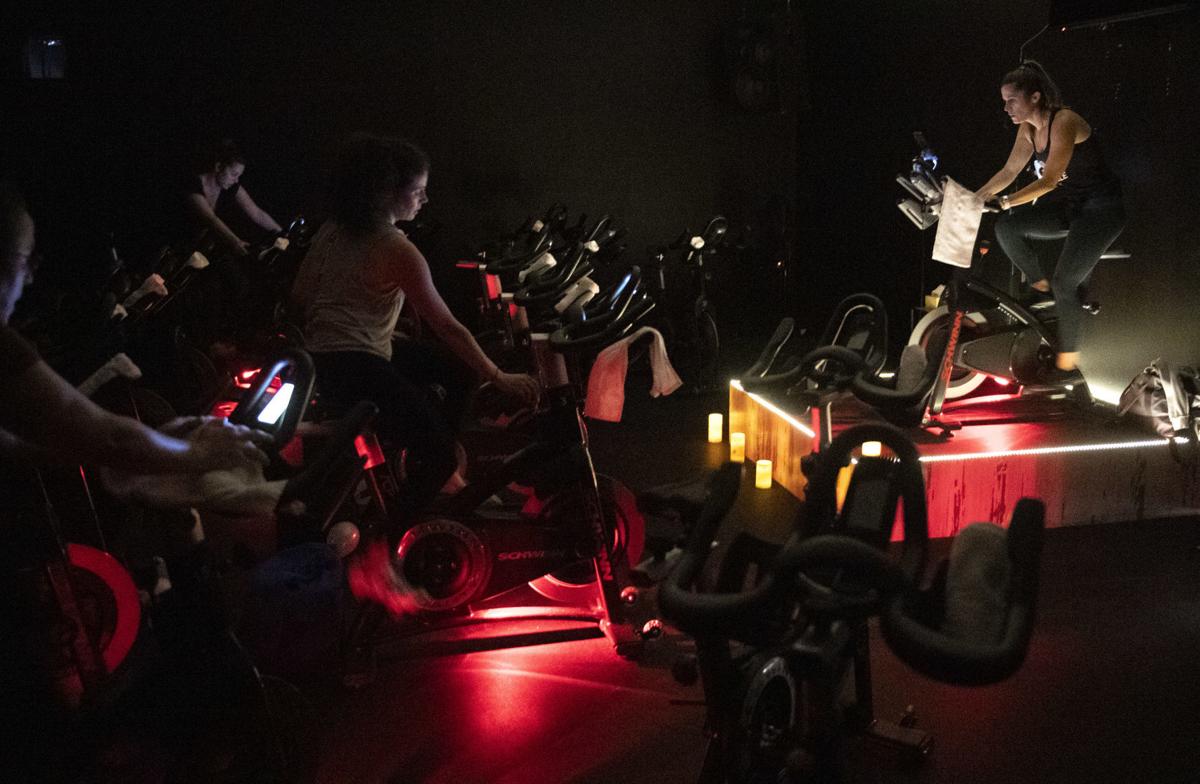 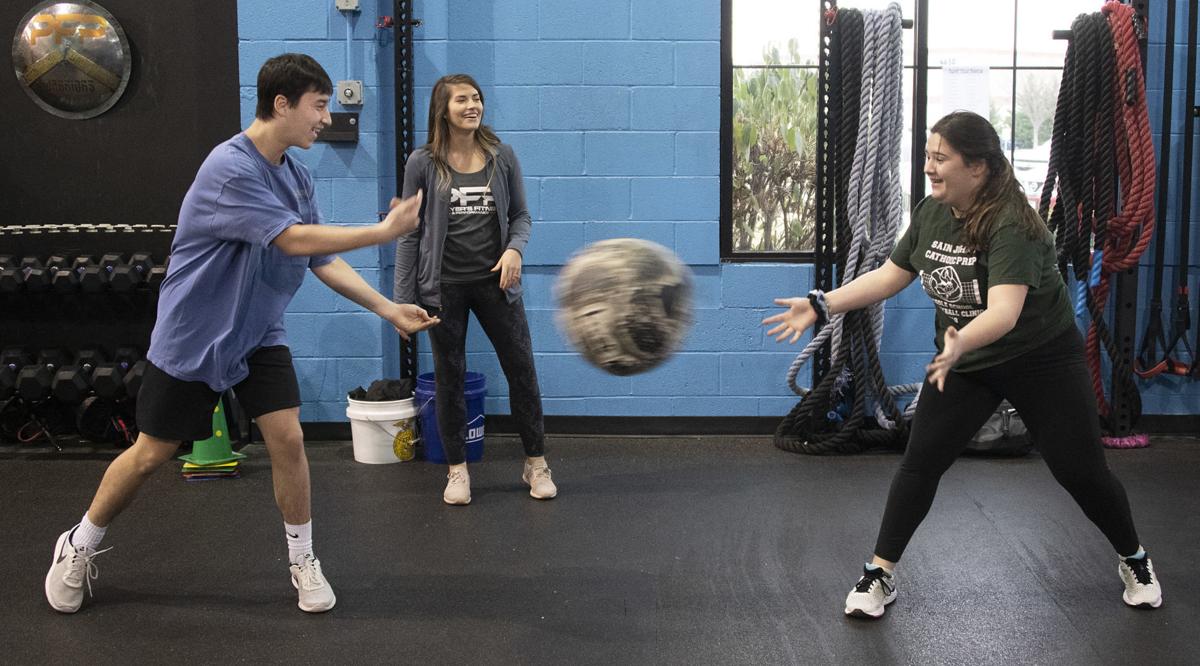 Fifteen-year-old twins Michel and Nia Bedard of Frederick work out with a ball under the supervision of fitness coach Stephanie Furman at Players Fitness and Performance Friday afternoon. 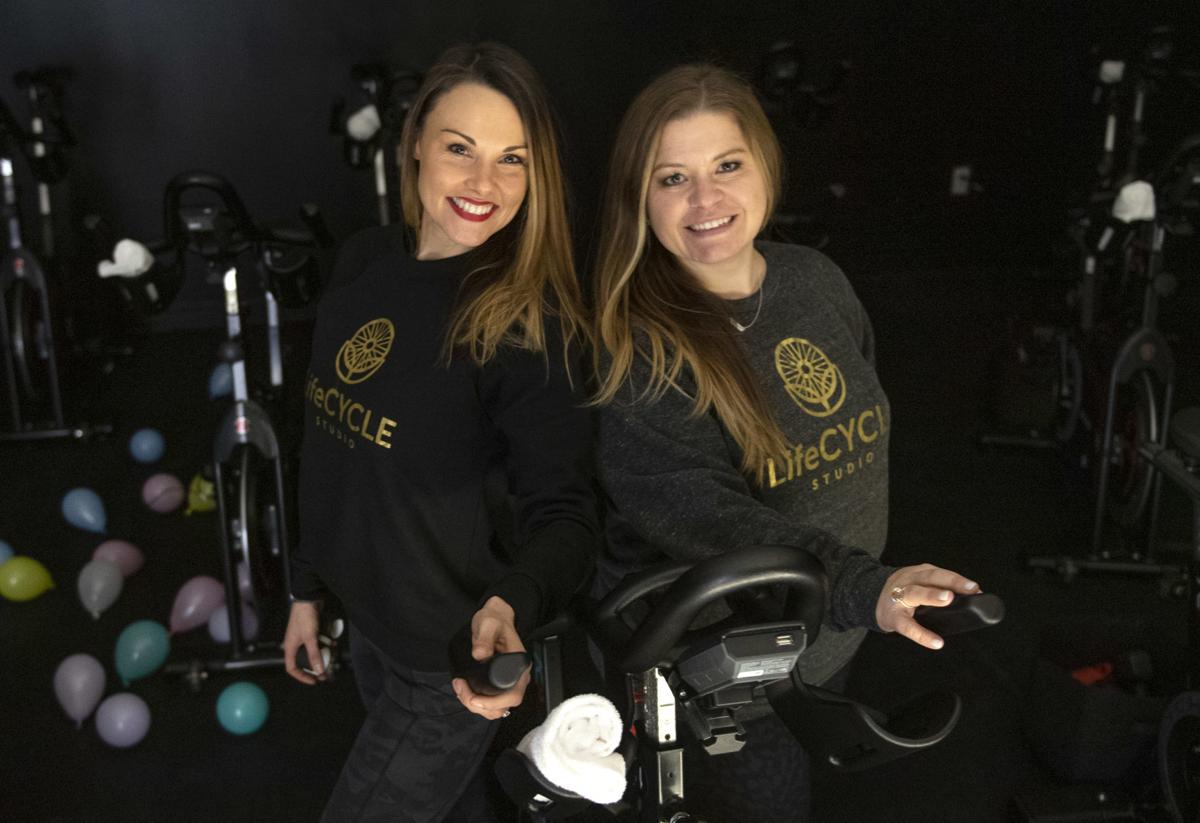 Fifteen-year-old twins Michel and Nia Bedard of Frederick work out with a ball under the supervision of fitness coach Stephanie Furman at Players Fitness and Performance Friday afternoon.

For those looking for a workout in Frederick County, the options extend well beyond lifting weights at a big-box gym. Increasingly, independent and boutique gyms are opening up, offering structured classes or one-on-one training — though often at a higher price than the chain gyms.

Frederick is on pace with the rest of the country. Between 2013 and 2017, membership at traditional gyms grew by 15 percent nationally while membership to boutique studios grew by 121 percent, according to the International Health, Racquet and Sportsclub Association.

Frederick has drawn boutique studio chains such as Orange Theory and Pure Barre, where clients can pay around $30 for a single one-hour class, or upwards of $120 per month for a membership. But Frederick also has its share of independent gyms.

You won’t find SoulCycle here, but you will find CycleFit and the just-opened LifeCycle, two spin studios owned by Frederick residents. In addition to PureBarre, there’s BarreEast.

Each gym has its own specialty, be it dance, yoga, Pilates, rock climbing or obstacle course training. Even gyms that do not specialize in one kind of fitness class have a philosophy: Player’s Performance and Fitness mixes spirituality with fitness. And Mad Fitness tailors every client’s experience to what they need.

The price is usually heftier than the $10 you’ll pay per month at a Planet Fitness or the $30 at LA Fitness. But the owners say that for the intimate environment, it’s worth it.

“People live such robust lives, and they want to come to a place where they can just exist, no pressure, no stress,” said Shannon Wallace Jr., co-owner of Mad Fitness. “They’re just welcome.”

Amy DiPasquale wanted to open Mad Fitness in 2017 after working for the chain Fitness First Health Clubs, which was sold to Gold’s in 2013.

DiPasquale said that many big-box gyms rely on high membership volume to make money — and most people who have a membership do not actually frequent the gym. She said that at the last gym where she worked, only about 10 to 15 percent of its members used it on a regular basis.

“So the people who are here, they want to be here,” Wallace said. “That’s important for us as well.”

While the gym isn’t as large as a 20,000-square-foot big-box gym, and doesn’t have nearly as much equipment, it does offer a more personal touch — something that DiPasquale and Shannon believe is what keeps people coming back.

They offer one-on-one and semi-private personal training, in addition to classes like barre, cycling and boot camp. The gym is also open during the day for members to use.

But their niche is youth, as they offer elementary, middle and high school classes. Entire teams will sign up for training programs with one of their 12 personal trainers.

That’s something DiPasquale knew she couldn’t get at a big-box gym.

“In a box gym usually there’s not a lot of focus on youth and I had three kids at the time, and I couldn’t just drop my kids off at a gym. It needs to be something that’s tailored and catered more toward kids,” she said.

LifeCycle owners Emily Harlow and Alyssa Macfawn said that they saw an increase in Pilates and barre studios coming to Frederick after the yoga studios came.

Now, there are about 10 yoga studios in Frederick.

D’Aquino thinks that there’s something beneficial about going to a yoga studio over a gym for yoga classes, in a general sense. She said that the classes at bigger gyms where the focus isn’t yoga can tend to be a little less spiritual and more focused on the fitness element.

Luna sets itself apart from the several other yoga studios by focusing more on spirituality and offering classes such as kundalini, a mantra- and breath-based practice. Still, they do offer classes where weights are involved in addition to Pilates classes.

Like many studios, Luna offers a variety of pricing options — including an unlimited membership, class packs and drop-ins.

That allows the owner to be able to meet the client where they are, D’Aquino said.

Similarly, other types of studios use this kind of pricing in order to appeal to a wide range of clients. LifeCycle offers a $149-per-month unlimited option, but drop-in classes are $25 each. Those individual class rates drop when clients buy classes in packs of five or 10.

Harlow and Macfawn said that this is beneficial for people who want to mix up their classes at several different studios. Maybe they’ll get a five-pack at LifeCycle, one at BarreEast, and another at a yoga studio. That way they can go to whichever studio they want to on any given day.

A membership to Mad Fitness is also tiered — the personal training options cost a bit more. But with several different types of classes, they operate a bit more like a gym like Gold’s or Anytime, where a membership gets you access to the gym floor as well as classes.

Still, DiPasquale thinks that it’s not fair to compare the $69 monthly cost of membership to Mad to that at a big-box gym because they’re entirely different.

More than anything, the owners stressed the community aspect as the reason why more people are turning away from big-box gyms to go to an independent, smaller studio.

Andrew Simpson, chief visual officer of Player’s Fitness and Performance (PFP), said that the community feeling is the most important part of the gym, which hosts group fitness classes and personal training for both youth and adults.

“People always say there’s something different about this place. ... It’s the people that make that happen, it’s the shining positivity and light in a sometimes dark world. … And for us, the source of our positivity as people and the light and the love, the source is God for us,” Simpson said.

PFP isn’t open to use at all times like big-box gym are, so clients are always working with a trainer or coach. Simpson said that working together with people can help strengthen their bond.

Additionally, the employees at PFP know their clients. They welcome new members with a message on a whiteboard at the entrance.

“I would say we just have a deeper connection with the people who come here. It’s not a surface-level thing, it’s not another surface-level gym, you’re part of the family,” said Cathy Himski, PFP’s director of first impressions. “I think people identify with how genuine that is.”

LifeCycle has been open for only two weeks, but Harlow and Macfawn already recognize their clients. They want to create a space where all kinds of people feel welcome. They’ve trained their instructors to coach their classes in a way that experienced athletes and people newer to working out can take part in.

Fitness classes and boutique studios can take some of the intimidation out of going to the gym, Harlow said, because the instructors are telling the clients what to do, and everyone is doing the same thing. Big-box gyms can be more intimidating, she said.

“If you’re new [to working out], you don’t know what you’re doing. You have no idea how to work the machines, what kind of weights you should be using, if you’re doing any of it right, and you feel like every single person there is looking at you, even though they probably aren’t,” Harlow said.

A study by OnePoll and Isopure found that 1 in 2 Americans feel intimidated by the idea of working out at a gym. Another survey by FitRated found that 65 percent of women have avoided the gym over a fear of being judged.

Macfawn has been working out for years, and said that she used to feel intimidated in large gyms as well.

“You just feel intimidated, and in a boutique studio it’s like you lose that part of it. ... You start to become a community,” Macfawn said.

Simpson at PFP thinks that the benefits of an independent gym, and their subsequent upswing — which he says he’s noticed in the five years since PFP opened — might go beyond just a sense of community or a good workout.

“I would say the needs and desires of people in general are shifting, people are missing that sense of connection, they’re not feeling loved as much, whether it’s at work or at school or at sports. And so the independent gyms, I think, fill more buckets for people than a big-box gym fills. The big-box gym really only fills the bucket of cheaper and more convenient because you can go at any time,” Simpson said. “It’s just not enough. People need more nowadays.”