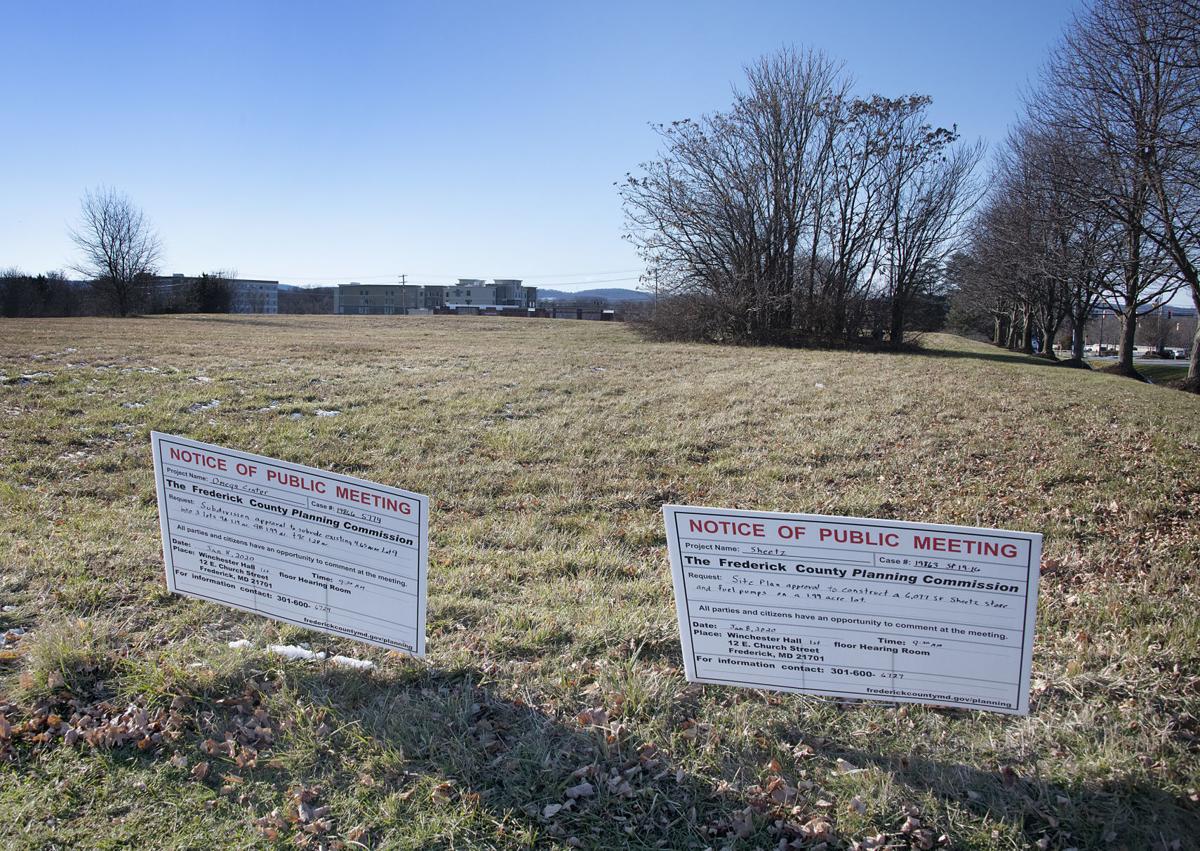 This field at the southeast corner of Buckeystown Pike and Executive Way is the planned site of an addition to the Omega Center, which will include a new Sheetz. 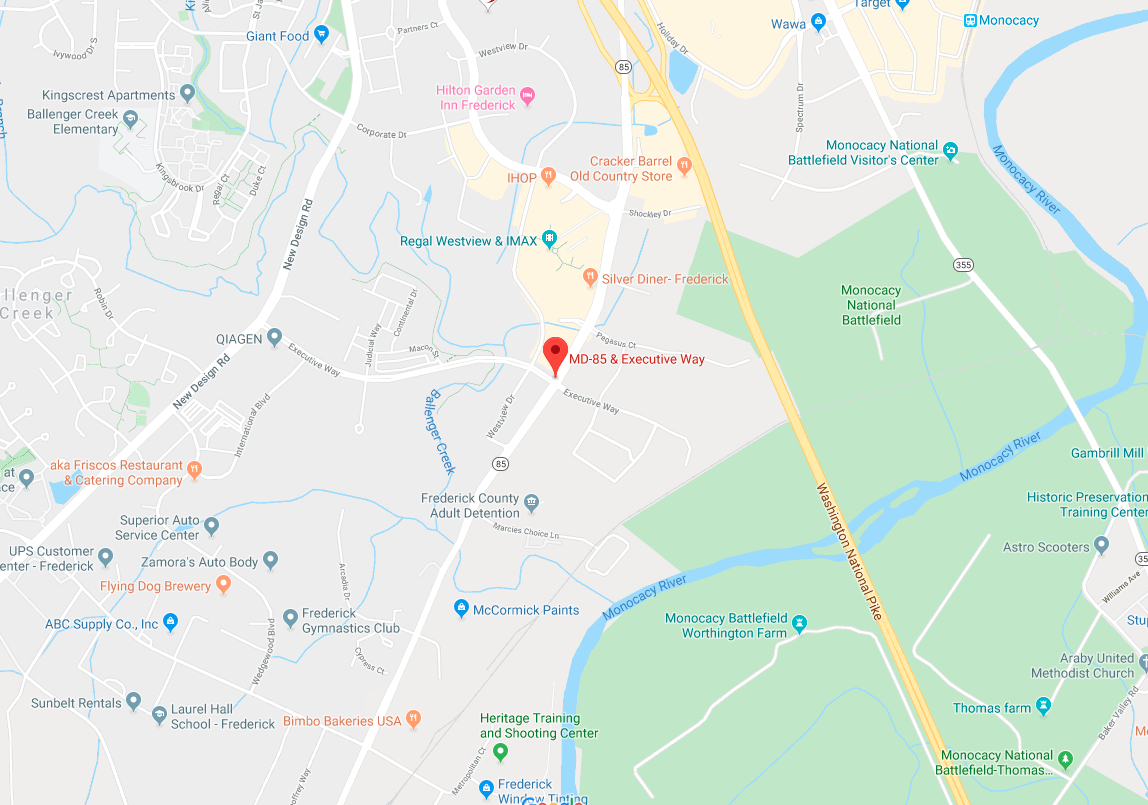 This field at the southeast corner of Buckeystown Pike and Executive Way is the planned site of an addition to the Omega Center, which will include a new Sheetz.

The Md. 85 corridor south of Frederick will be getting its third Sheetz.

But the commission rejected a request by the store’s applicants to allow light poles that are taller than county zoning law allows in the area where the store will be built.

Sheetz had asked the commission to grant a modification to rules that limit light pole height to 18 feet on commercial properties, to allow lights up to 24 feet tall on the property.

In a letter to county planning staff, Sheetz said that the company’s standard lights across the Mid-Atlantic region are 20-foot poles on a 3-foot base.

The plot of land where the new store will be built is zoned light industrial, while the property’s use will be commercial, setting up a seeming conflict in zoning rules.

In its letter, Sheetz argued that since the property and others around it have the light industrial zoning designation, the taller poles should be allowed. Other types of industrial areas nearby have lights up to 30 feet high, the letter said.

Commissioners were skeptical, arguing that the county’s zoning ties rules to a property’s use rather than its zoning.

Commissioner Bob White said he wasn’t convinced by the company’s argument that they should be allowed to use taller poles because that’s their standard.

The Planning Commission should be consistent; otherwise, why bother having a standard, he said.

The three lots approved by the commission Wednesday are bordered by Md. 85, Executive Way and Governors Way, across Md. 85 from the Westview South development.

One of the parcels adjacent to the newly divided lots will have a hotel, although the brand remains to be seen.

The project was originally scheduled to be a 114-room Hilton Tru hotel, although that plan has fallen through, it was announced Wednesday.

Where the Fresh Markets at in frederick!! We need one, not common market. I been in it once and haven't been back.

sue1955, the Gaithersburg Whole Foods is in the Kentlands

Pretty soon Fred will be overrun with Sheetz and Royal Farms. How about a Whole Foods? Now that will be a welcome addition. Common Market has lost it's luster.

Yes, Common Market has somehow lost its luster. Maybe the new store on 7th street will get it going again.

Somehow? It's pretty clear as to why. I hope so but am not holding my breath.

They have not lost their luster but, if it is so, clear to you I would love for you to try to explain why.

Um, yes, they have, vegan. Obviously your vision is tainted so I will not go down a rabbit hole with you.

Answer the question posed by Vegan, Alice Jones. Answer and explain your position.

Alice; you should answer the question. If you denigrate a local business you should at least have the integrity to state your reasons. Dirty? Lack of choices? Poor staff? Veggies wilted? Meat rotten?

I did not denigrate the business. I simply stated it has lost its luster - for me. I can start with the decreased quality of the produce, the C shares, the hot bar (which I will not touch anymore), the immense staff turnover, the old seafood, the list goes on. I know and have known many people that worked there so I am not pulling this out of thin air. Again, this is only one persons opinion. Y’all need to settle down a little.

Common Market has not lost its luster. I go shopping their all the time and can not wait for them to open the new one on 7th street.

Alice; a few years ago, Whole Foods responded that there were no plans to open a store in Frederick. I'm guessing that the WF management thought that enough people were not going to spend the money and/or did not care enough for their type of merchandise. A lot of the general public are "into" cheap prices and do not have gourmet tastes. I get it. However, I do miss Whole Foods. In my working years in Rockville, I shopped frequently at the Congressional Plaza location (since closed right before I retired). I could get things there that I could not get anywhere else.

I was pleased that Wegman's has thrived seeing as they are a bit more expensive. There are enough who value some of the quality to at least support one such store here!

I agree, shiftless. Wegmans was a real boost to the grocery shopping scene in Frederick (to my mind).

Sue - I drive down to WF’s in Gaithersburg. Wegmans is a nice addition to the area however I prefer to take the ride. Please edify but I though WF was not allowed in Frederick because of some zoning? I could be wrong. I would think if Wegmans saw opportunity, certainly WF would see the same?

Alice, I didn't know that WF was in Gaithersburg now. WF has a store in Gaithersburg many years ago, but at some point, it was closed. If memory serves me correctly, it was located in the strip mall on 355 (in the general location of the now-closed (several years ago) Montgomery Ward. So, you informed me of something I didn't know. I don't drive any longer, so I won't be going to that location, but thank you for letting me know that there's a location other than Rockville. (Congressional Plaza location closed several years ago. The store was located in an office building around where Nicholson Lane comes into Rockville Pike. Sorry to be so wordy.

The subject of WF in Frederick came up when discussions were going on for a grocery store in Brunswick. The subject came up with discussions that went on regarding the location of the former Carmack-Jays in downtown Frederick. (Don't remember which issue came first). As was reported in the FNP at the time, an actual letter came from WF that a store would not be established in Frederick. WF could have done their own research and made a decision (maybe falsely) that Frederick is a lower-paid area and would not support WF prices and products. Of course, residents know that there are a lot of commuters with well-paying jobs. But, to outsiders, it still has a perception that it is a poor county (as compared to Montgomery County, for example). And, WF has the reputation of "Whole Paycheck." That turns off low-income people and/or folks looking to economize. Lastly, with reporting of Frederick people being so "food insecure," I can see how corporate would decide that a higher-end store would not survive.

Why not put a fresh market!!! Yes, much better than wegmans and whole food!! All food FRESH!!!

In practical terms there are 3 Sheetz in Frederick. Rt 85, Rosemont and Rt 26, though "technically" the Rt 26 one is Walkersville, it is only a few hundred yards away from the Frederick line.

The Walkersville Sheetz is on 194. Not 26. And it’s in Walkersville town limits. The annexed (or so I think it was)

Talking about saturation. Really Sheetz? Just how many stations do you need on the same road within 3 miles? Are you still renovating the station at FSK Mall? How big will this new station be? Are you completing with yourself? I foresee this newer station closing shortly after opening or you drop out before it is even opened.

Theya re not going to close it early nor is it going to fail. They are going by market trends, traffic totals, demogrpahics along with other metrics. Businesses(at leas tnot he well run ones...of which Sheetz is a wlel run business) are going to open stores without being very very sure not only is it going to do well but it wil profit nicely and enable either more expansion or contributing further to their overall bottom line.

I thought Frederick already had four Sheetz and this will make the fifth . There is one by FSK mall, one on Rosemont, one on E. Patrick St. and the other one is on off Buckeystown I70 exit

I think this is the third Sheetz that is on 85 (this one, the one by FSK, and the one by the Audi dealership). That is how I read the headline

"... be consistent; otherwise, why bother having a standard." Bless you Mr. White. This is at the core of the matter - effecting all else. The heart of where all of us are. Three Sheetz to the wind on their terms; the corporation telling our landscape how it will look for their brand equity and management. Our environment. - Climate Emergency? If "they" don't take it seriously - why should the all of us? Answer: Because I pray - we believe in Eden - all of us. PS: Here's a dedication to Three Sheetz to the wind, and their unanimous partners. Reaching way back to the year 1970, the song: Signs: [chorus] - Sign, sign -

Blockin' out the scenery -

The multiplier effect of a strong downtown core: more new business in Frederick. You know who's economy keeps it rocking!

“ You know who's economy keeps it rocking!”