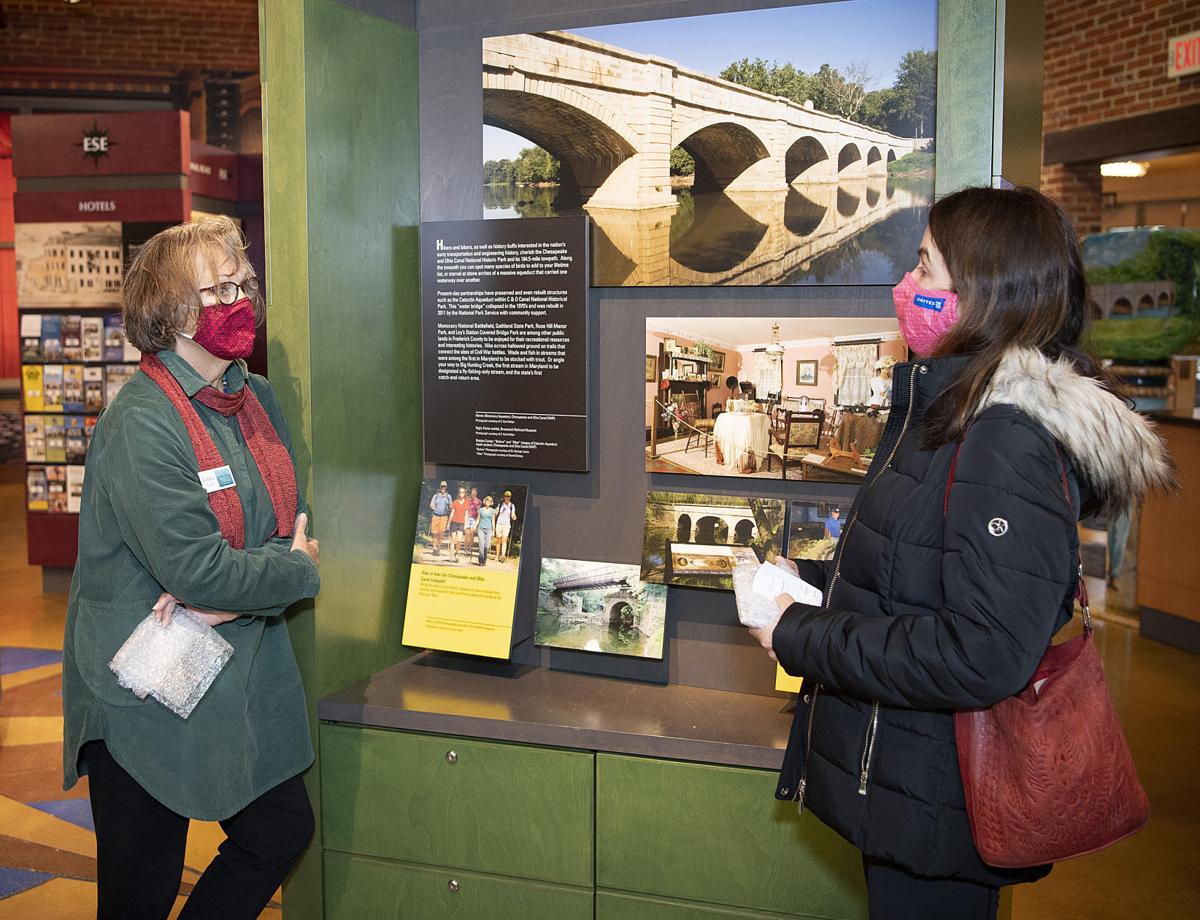 Debbie Culler, an employee at Frederick County Visitors Center on East Street, left, chats with Jean Fleming who stopped by to do some gift shopping Friday afternoon. 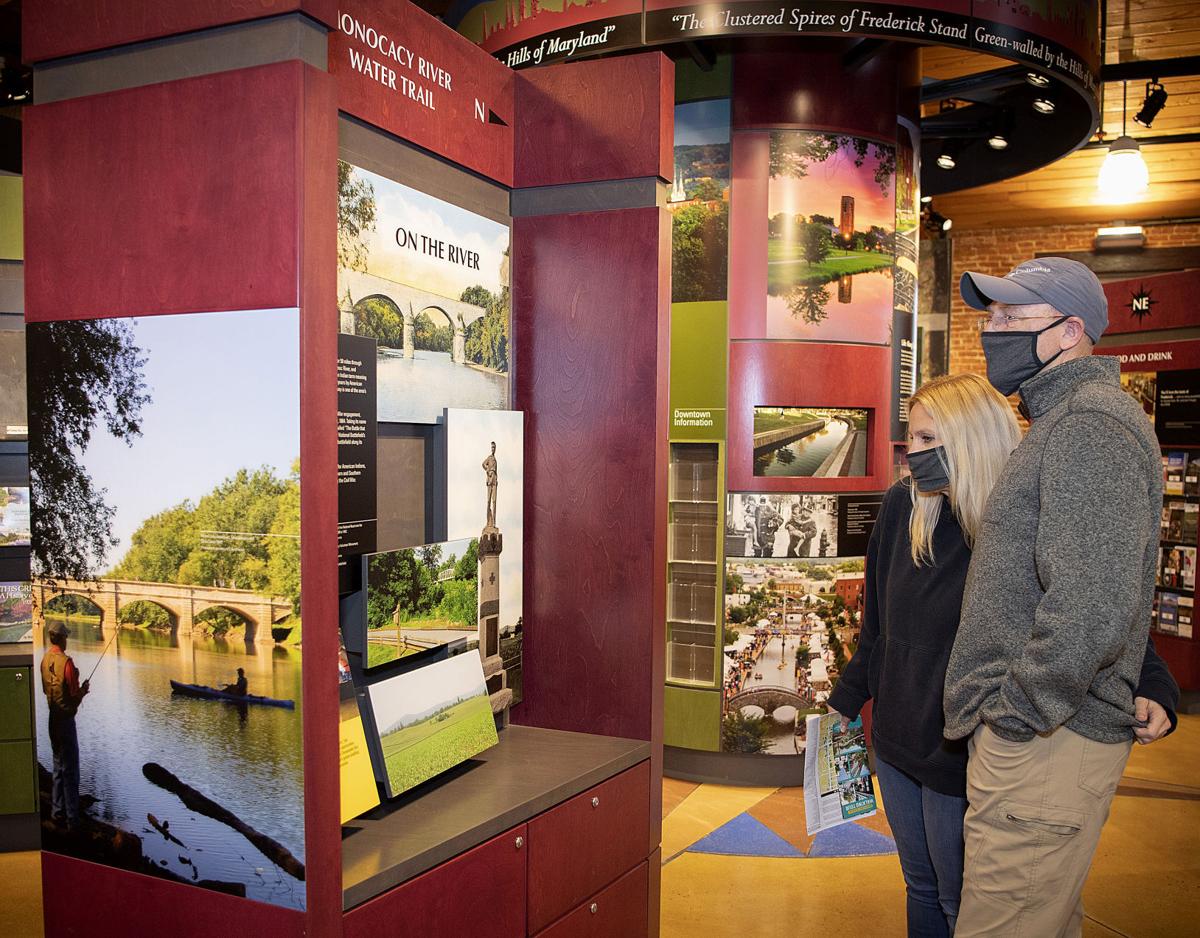 A couple traveling from Florida check out one of the many displays Friday at the Visitors Center on East Street depicting the history of Frederick County. 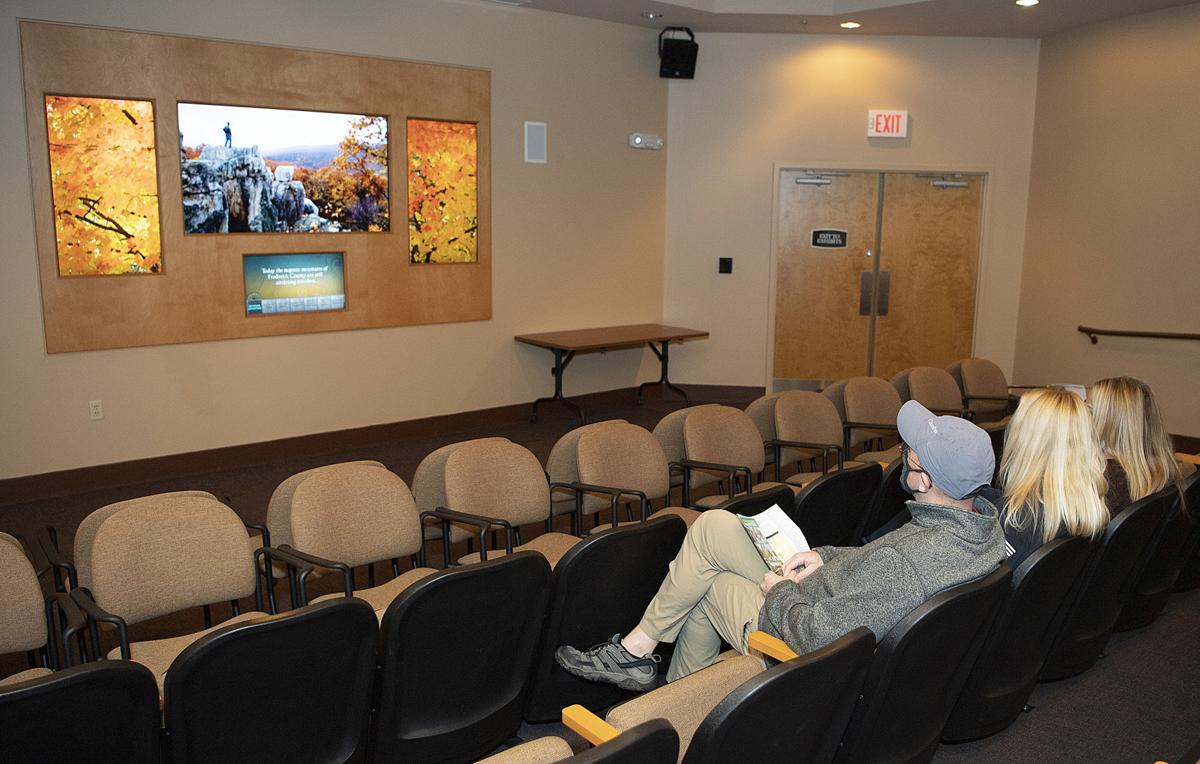 Three tourists from Florida watch a 15-minute video of the history of Frederick County in the theater at the Visitors Center on East Street.

Debbie Culler, an employee at Frederick County Visitors Center on East Street, left, chats with Jean Fleming who stopped by to do some gift shopping Friday afternoon.

A couple traveling from Florida check out one of the many displays Friday at the Visitors Center on East Street depicting the history of Frederick County.

Three tourists from Florida watch a 15-minute video of the history of Frederick County in the theater at the Visitors Center on East Street.

In normal times, those looking to spend time in Frederick might find themselves at the county's Visitors Center on East Street, watching a show at the Weinberg Center or enjoying an exhibit at the Delaplaine Arts Center.

It's all part of Frederick County's tourism industry, which has seen revenue declines and activity slowed due to the coronavirus pandemic.

But leaders of those groups remain optimistic — with a vaccine hopefully coming by year's end — that tourism activity will return by next spring.

John Fieseler, president of Visit Frederick, said hotel tax revenue for the Tourism Council of Frederick County in the last quarter of fiscal 2020 dropped $371,434 below budgeted projections, from about $2.475 million to $2.104 million.

Despite those drops, Visit Frederick has been doing OK, Fieseler said. They had to shut down the Visitors Center on East Street from mid-March to late June, and employees took voluntary unpaid time off, he said. But the Tourism Council got $350,000 in CARES Act funding from the county, $5,700 of which was used for PPE and other protections for the Visitors Center.

The rest was used for marketing and COVID-19 information and targeted more on nearby areas. Those funds are corresponding with reopening phases outlined by Gov. Larry Hogan (R) and local government officials.

"We’re fortunate in Frederick County that we don’t have all of our eggs in any one basket. And so it’s diversified," he said. "In the past, in the time I’ve been here, we’ve seen downturns, after 9/11, after the recession and you kind of watch as different segments come back at different rates. And so knock on wood, we’re fortunate that we’ve seen the level of recovery."

One frequent venue that would normally be a tourism destination is the Weinberg Center for the Arts on East Patrick Street. John Healey, executive theater manager there, said ticket revenue and concessions probably account for just more than 60 percent of the revenue at the theater, which has been impacted since mid-March due to show cancelations.

"We saw $450,000 in ticket sales walk out the door with refunds and shows [being canceled and postponed] … it was not a pleasant number to look at," Healey said about revenue lost earlier this year.

But memberships have been steady, and state and local grant money has helped, he added. They have been able to invest $35,000 in a better HVAC system and touchless features for bathrooms.

And despite show postponements, members and sponsors are staying committed to the cause, through donations and other signs of support, Healey said. About 15 part-time staff working behind stage and in the box office haven't seen much work, but no full-time staff have been furloughed, thanks to the city of Frederick's support, he said.

"I think the people that live in Frederick, in both the county and the city, realize what a great little living area, both for the arts and the restaurants and other [activities], this is," he said. "People want to support that, and they don’t want to lose that."

But for now, it "doesn't make sense" to open up shows for 25 people, he said.

Over at the Delaplaine Arts Center, exhibits are still occurring, said Duane Doxzen, the center's director of development and communications.

Admission to those exhibits is free, so tens of thousands of dollars in lost revenue comes from both fewer classes being offered, along with slower rental activity at Gardiner Hall, an event venue, Doxzen said.

The county gave $10,000 to the arts center, which was typical for many nonprofits, he added. And additional aid came from the Maryland State Arts Council, which also helped the Weinberg Center. No staff has been laid off, Doxzen said.

"We’ve tried to be very realistic about what we’ve been able to do," Doxzen said, noting a lot of programming and exhibits are available online. "If this [pandemic] goes on for another year and a half, that may change … Right now, we feel confident we can carry on through the end of our fiscal year, which ends in June [2021]."

Fieseler said despite the challenges and uncertainty in the coming months, it could have been a lot worse locally, especially when looking at national trends.

"When they look at the whole country, urban areas are doing worse than suburban or rural areas," Fieseler said. "Places like Washington, D.C. and Hawaii, hotel occupancy actually dropped into the single digits. Cities that rely on convention business, as a big part of their visitation, are faring a lot worse. So obviously, it’s a big hit, but ... I was afraid it would be a lot worse."

For now, tourism industries are just trying to follow public health protocols and hoping vaccine effectiveness and distribution will lead to busier times.

"There would be nothing better than to walk on that stage and say, 'Welcome to the Weinberg Center,'" Healey said. "And as soon as that’s safe, we’re ready to do that."