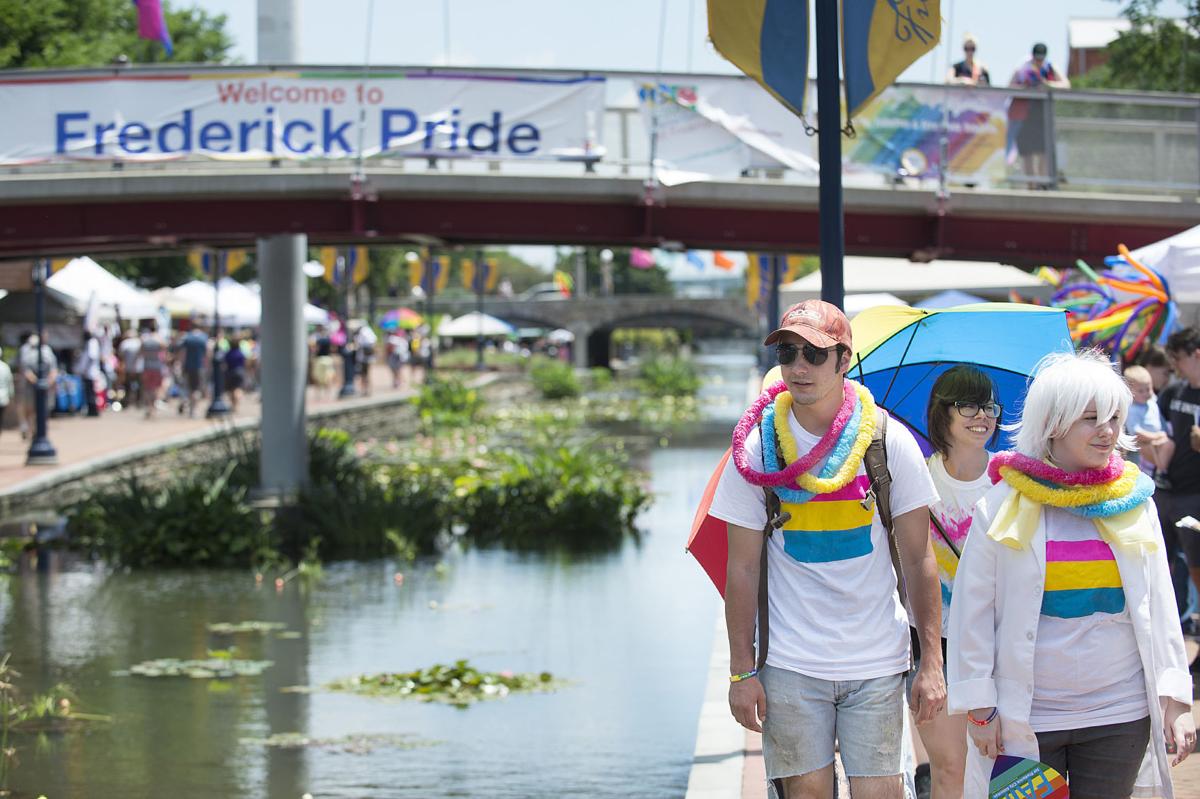 The city of Frederick will host its eighth annual Pride Festival on Saturday. About 8,000 people are expected to attend. 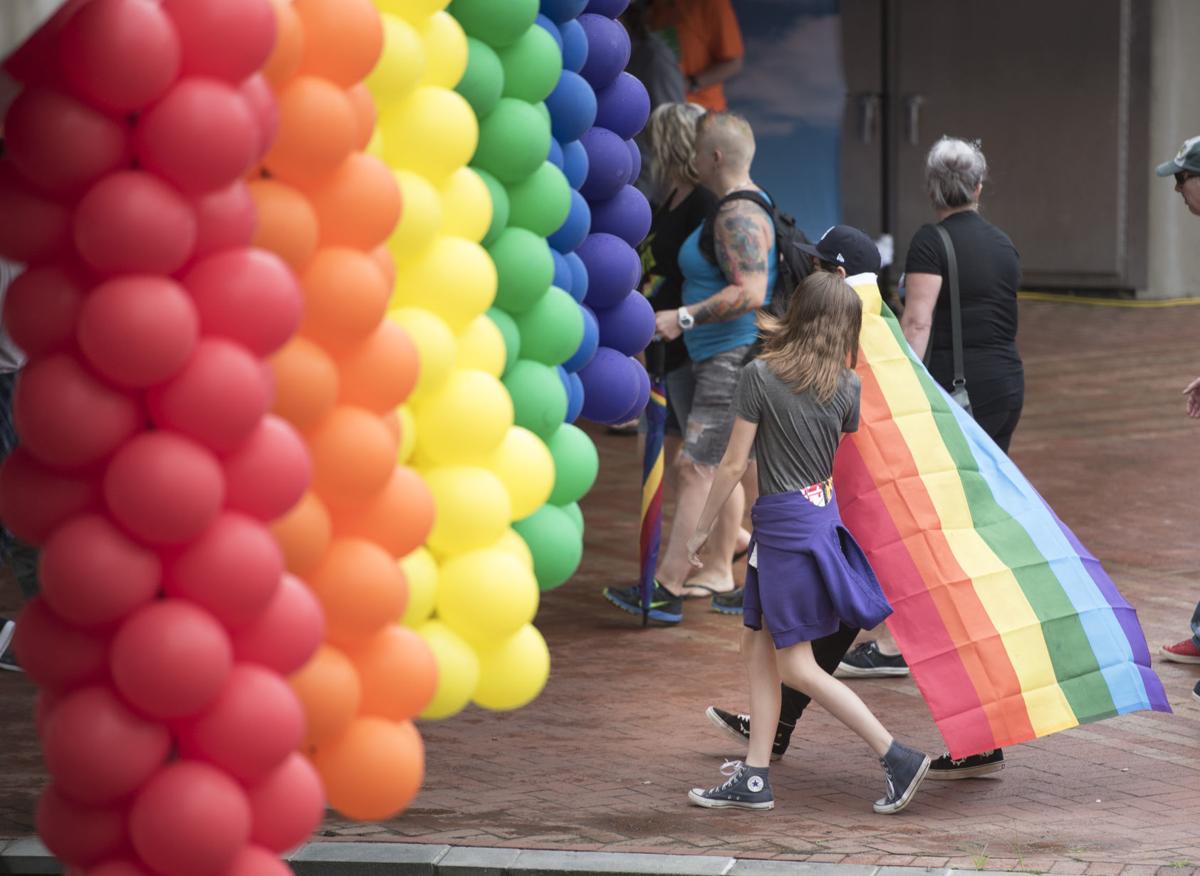 Attendees of the 2018 Frederick Pride event walk along Carroll Creek.

The city of Frederick will host its eighth annual Pride Festival on Saturday. About 8,000 people are expected to attend.

Attendees of the 2018 Frederick Pride event walk along Carroll Creek.

Frederick’s first Pride event in 2012 had about 300 attendees.

This year, 8,000 people are expected to attend the eighth annual Frederick Pride, which will be hosted Saturday from 11 a.m. to 6 p.m. at Carroll Creek Linear Park.

Kris Fair, chair of The Frederick Center, an organization that aims to advocate for and support the local LGBTQ community, said the organization has and continues to push to build inclusivity.

Fair said he’s seen “the Frederick community as a whole responding, and creating a much more live and vibrant and affirming space for LGBTQ people to feel confident and comfortable and safe.”

One example of the support is that many local businesses have “Frederick Pride Ally” stickers in their windows and are displaying Pride flags, Fair said.

This year’s Pride event has added significance, as it falls on the 50th anniversary of the Stonewall riots, a movement that began in June 1969 after the police raided the Stonewall Inn, a gay bar in New York’s Greenwich Village. The demonstrations that followed acted as catalysts for the modern LGBTQ movement.

“We want this event to be about our LGBTQ community and celebrating the cultural history, as well as recognizing the reason why Pride was started in the first place, especially on its 50th year,” Fair said.

The event is chaired by Frederick Center volunteer and LGBTQ community member Nicole Beller, who oversees a committee of 25 other volunteers who helped organize the event.

The event will have a variety of entertainment and is maxed out with more than 140 vendors, Beller said.

The vendors will include both for-profits and nonprofits, social action groups, faith groups and health-based organizations.

Free Mom Hugs-Maryland, a chapter of the national Free Mom Hugs organization, a group dedicated to supporting and advocating for LGBTQ people, will have a table.

Lesa Schepers, the chapter leader of Free Mom Hugs-Maryland, said many volunteers have gay children and have seen that not every LGBTQ child is given love and support.

“By going out and giving these hugs, we have seen it make a difference in people’s lives,” she said. “Some of the hugs are very cheerful and happy, and they’re just excited to see you there. And other hugs, the person will collapse and just sob because they haven’t hugged their mom in years or haven’t even spoken to their mom.”

The organization has more than 50 volunteers for the Frederick Pride event, Schepers said.

“It goes beyond moms,” Schepers said. “We have dads. We have siblings and grandparents and allies who all like to get involved in the movement.”

Free Mom Hugs-Maryland will also offer brochures detailing more information about the national organization and the services it offers.

Ronnie Taylor, a trans activist and Frederick Center vice chair, will deliver the keynote address, which will focus on the past role of trans women of color in the Stonewall movement and how the current movement needs to recenter on the fight for trans equality, Fair wrote in an email.

The drag performances will be headlined by Tatianna of “RuPaul’s Drag Race” and will also include local performers such as Stephanie Michaels, Jen Da Fun and KC Florence.

There will also be family-friendly performances by Honeybee Burlesque.

Cassata, a transgender artist and activist, was named one of “11 Transgender & Non-Binary Musicians You Need to Know,” by Billboard in 2017.

Metered parking will be in effect during the event and parking garages are both preferred and the “best bet” for attendees, said Michele Bowman, public information and outreach coordinator for the Frederick Police Department.

No roads will be closed for the event.

Fair said there are layers of security for the event, but that it’s not “heavy-handed” because the focus is on the LGBTQ community and the celebration of their history.

Organizers are bringing their own security staff, in addition to the officers from the downtown police unit who will be on duty.

“It’s a peaceful event, so we’re not expecting any issues or concerns,” Bowman said.

There is no heightened security after the shooting scare at Capital Pride, when a man wielding a BB gun after a reported altercation lead to panic and incorrect claims of shots fired.

Bowman said, however, that the police department is monitoring social media and other online sites.

“We’re well aware of what happened and are keeping our eye on things,” Bowman said.

Bowman added that attendees should alert authorities if they see anything that may be a threat to security.

Fair said he has managed many festivals.

“This one’s the only one that people always come up afterwards and say, ‘Please make sure this never goes away,’” he said.

50 years after Stonewall, LGBT rights are a work in progress

NEW YORK — They didn’t set out to change history; they weren’t the first LGBT Americans to mobilize against bias.

I wonder if Mr. Fair would respond with the list of the "allies" his is referring to -- an a brief description of each. Pardon the pun, but it's a fair question.

Dear LGBT, If you don’t want to be treated differently for being gay, then stop acting like being gay somehow makes you special. Your sexual orientation is neither an achievement nor a holiday. You have not accomplished anything simply by being attracted to one sex or another.

Could not agree more, why celebrate something no one wants to hear about. The whole thing is ignorant

Rim24, can u explain your screen name!

There seems to be an awful lot of straights (and whiny whites) shouting "I'm proud too!"

The accomplishment is in having survived straight white nonsense.

So while here in blue Maryland an LGBTQ pride day is hosted, in red Tennessee a "christian" Baptist minister openly advocates their extermination by the state. And the minister is on the public payroll as a paid, active detective! And no doubt this "minister" claims he is serving God and takes a big fat tax deduction for every expense in his life as a man of high christian principles serving our Lord. Something tells me he's a fraud. But the big question is how many in his stinking church will heed his word if the state doesn't.

But no follow up on the Roxie Santos lawsuit settlement??

How much TAX money was spent/wasted exactly? You seem to be in the know.

So nice to see how much you care about discrimination against the majority, who have suffered so much.

Every month is Straight Month.