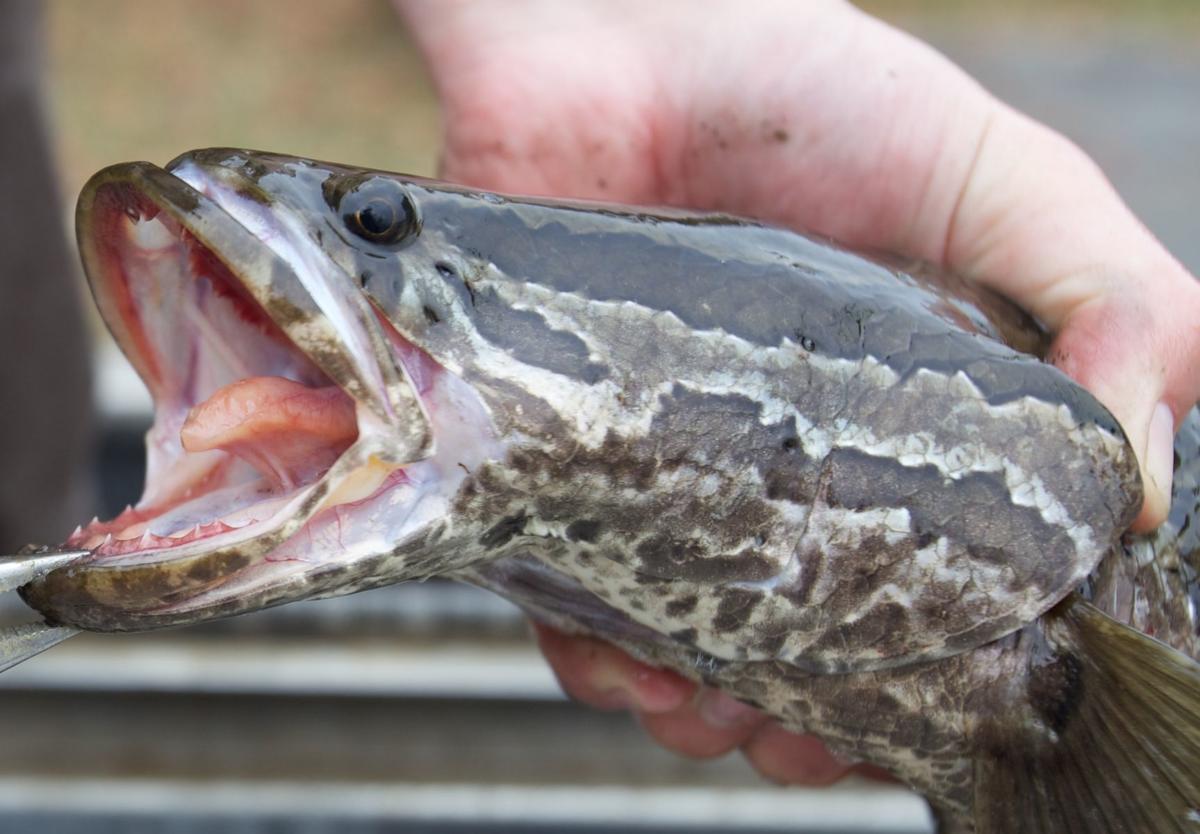 An angler holds open the jaws of a northern snakehead to show its sharp teeth. 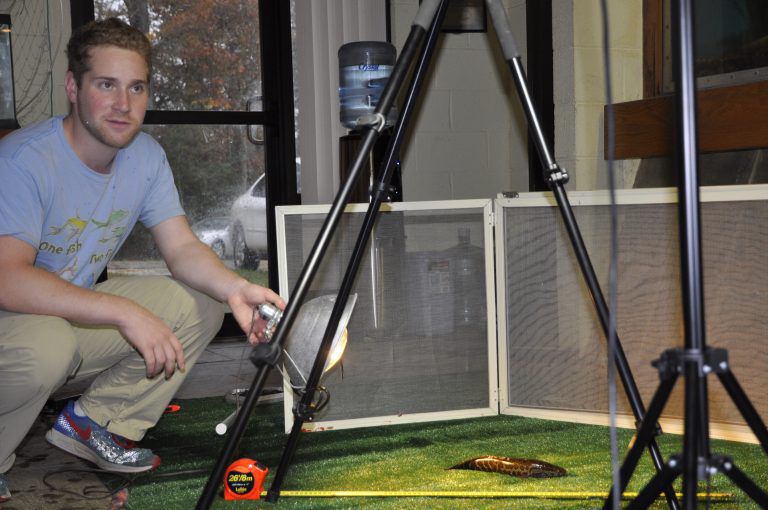 Noah Pressman, 23, with a northern snakehead at the Maryland Department of Natural Resources Southern Regional Office. Bressman studied the muscle movements of the fish to determine how it “walks” on land. 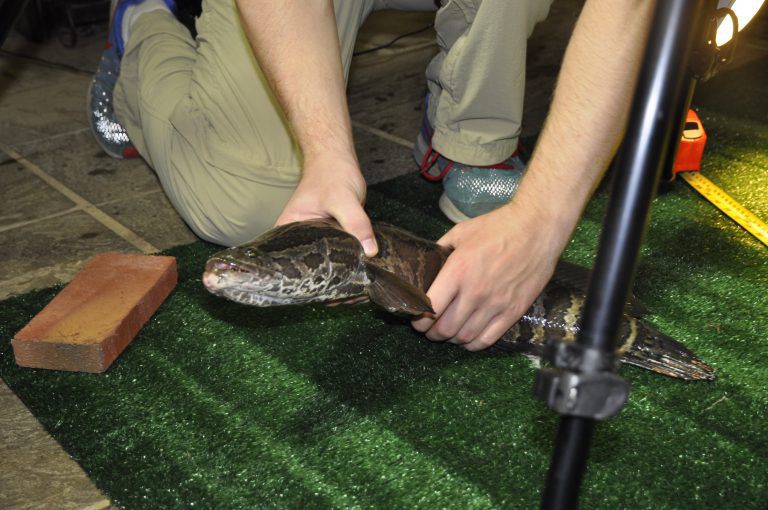 Noah Pressman, 23, holds a northern snakehead at the Maryland Department of Natural Resources Southern Regional Office. Bressman studied the muscle movements of the fish to determine how it “walks” on land.

An angler holds open the jaws of a northern snakehead to show its sharp teeth.

Noah Pressman, 23, with a northern snakehead at the Maryland Department of Natural Resources Southern Regional Office. Bressman studied the muscle movements of the fish to determine how it “walks” on land.

Noah Pressman, 23, holds a northern snakehead at the Maryland Department of Natural Resources Southern Regional Office. Bressman studied the muscle movements of the fish to determine how it “walks” on land.

The Maryland Department of Natural Resources has worked hard to stomp out the myth that a snakehead — a sharp-tooth, muscular, invasive fish in the Potomac River watershed — can walk on land.

In southeast Asia, where the fish is native and monsoon and dry seasons dominate, the snakehead has been seen “walking” between bodies of water. The behavior has not been witnessed in the U.S., but as the fish continues to spread to new waterways in the state, fisheries managers are looking at what conditions might make them take a stroll.

“We’re defiantly seeing expansion outside the Potomac and that is continuing to occur,” said Joe Love, a freshwater fisheries manager with the Maryland Department of Natural Resources.

It’s well-known that snakeheads can live in shallow water and low-oxygen environments. What is not understood is how a snakehead in those kinds of conditions then moves to a new body of water, or if they do at all.

That’s where Noah Bressman, a Ph.D. student at Wake Forest University, comes in.

To determine the terrestrial movements of northern snakeheads, Bressman has been using cameras and electrodes to record the intensity and length of time that snakeheads use different muscles to propel their bodies across the ground.

He has conducted his research at the Maryland Department of Natural Resources’ Southern Regional Office and used live snakeheads caught from Maryland’s waters.

Bressman started studying how fish move on land as an undergraduate at Cornell University.

“It’s a pretty small field. There are several professors who study it,” Bressman said. “I got into it independently, finding these fish on the floor.”

While taking a summer class at Shaols Marine Laboratory on the Gulf of Maine, Bressman started finding 2-inch mummichogs on the same part of the laboratory’s floor each day, 10 feet away from the tank. If the fish had jumped out of the tank by mistake, then they should have been closer to the tank.

Using a high-speed camera, he recorded a tail-flip jump that mummichogs use to move across land. Then, he started changing conditions in the laboratory to figure out which of its senses the mummichogs were using to find the same spot on the floor each time they leapt from the tank.

Mummichogs were able to find water on the floor, but if the lights were turned off they could not. When he turned back on the lights and replaced the water with tinfoil, the fish could once again find the spot on the floor, which lead him to the conclusion that the mummichog was using sight to find reflective surfaces.

This spring, Bressman will complete similar research with snakeheads.

Through a series of experiments that change light, water and slope, Bressman plans to identify what environmental cues make a snakehead move. Most of the experiments will be done inside the lab, but potions may be done outside because snakeheads respond to sunlight.

What is perplexing, is that snakeheads’ physiology includes everything it needs to easily move across land. It just chooses not to in the U.S., Bressman said.

One of his hypotheses is that the extreme dry and wet weather patterns of a monsoon region could prompt a snakehead to change environments, while the Potomac River is a more consistent environment.

Love said it was also possible that during flooding or high-water events, snakeheads are able to pass through temporary connections between bodies of water rather than over land. There have also been sightings of snakeheads getting over low-hanging dams.

Because of the number of ways snakeheads could potentially travel, Bressman’s research is being conducted in Maryland.

Initially, Pressman planned to conduct his research in North Carolina closer to Wake Forest’s campus. However, it is illegal to transport a live snakehead across state lines.

The fish can breathe air and survive outside of water for days. They’re also good escape artists — leaping out of tanks, off tables and out of nets — and can produce a large number of offspring when they reach water.

Four years ago, one of Love’s colleagues was studying snakeheads in low-oxygen conditions, and the fish jumped out of the tank and was found alive on the floor three days later.

“Not only are they agile and muscular, but if they do leap out of the tank, they’re likely to live for a long time,” Love said.

Despite their Houdini-level escape artistry, it is important for fisheries managers to better understand what makes snakeheads change environments.

“As a manager, I may look at his results and better understand the potential of species to invade nearby waterways,” Love said.

Stop the Snakehead Derby: Anglers will compete to catch this invasive species ... and perhaps eat it for dinner

An invader has made its way into Frederick County waters.