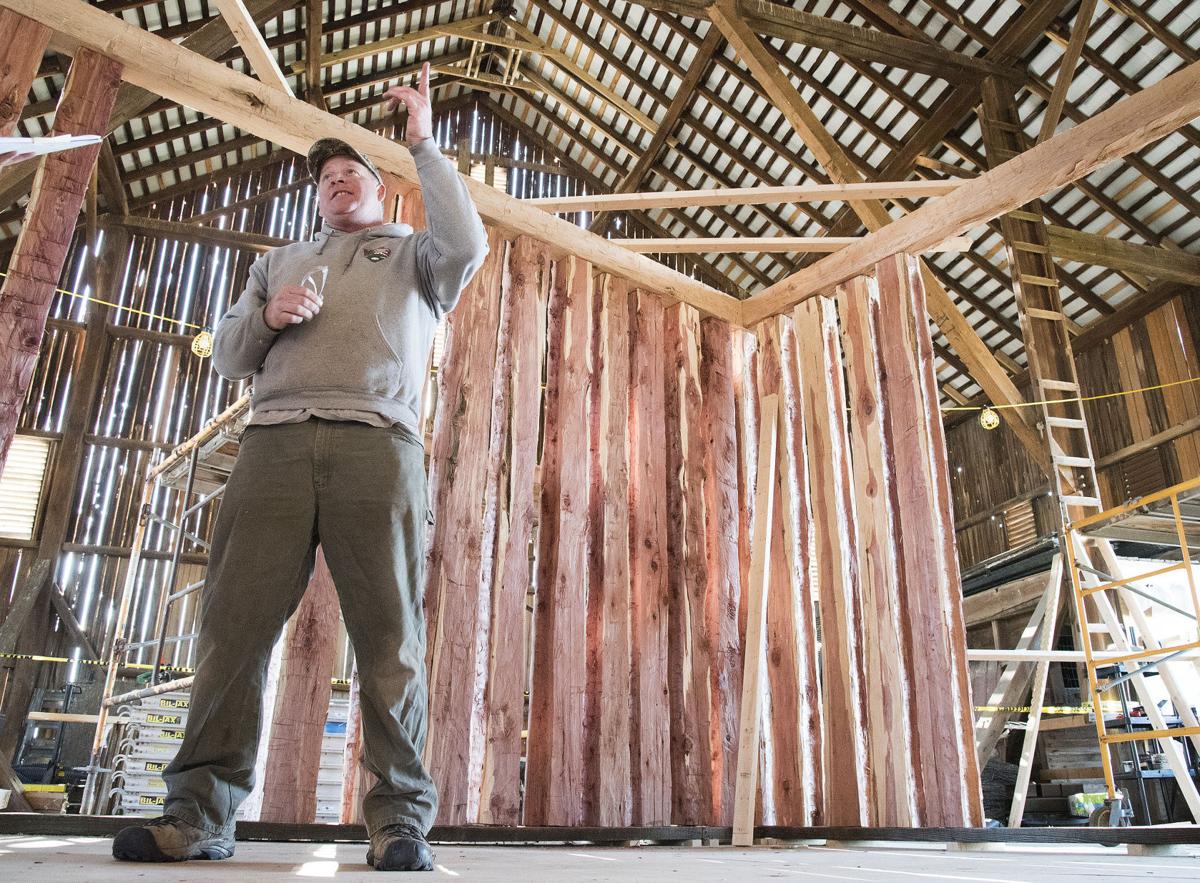 Mike Cardis, maintenance mechanic and work leader for the National Park Service, talks Monday about the French Creole cabin he and a crew built at Monocacy National Battlefield. 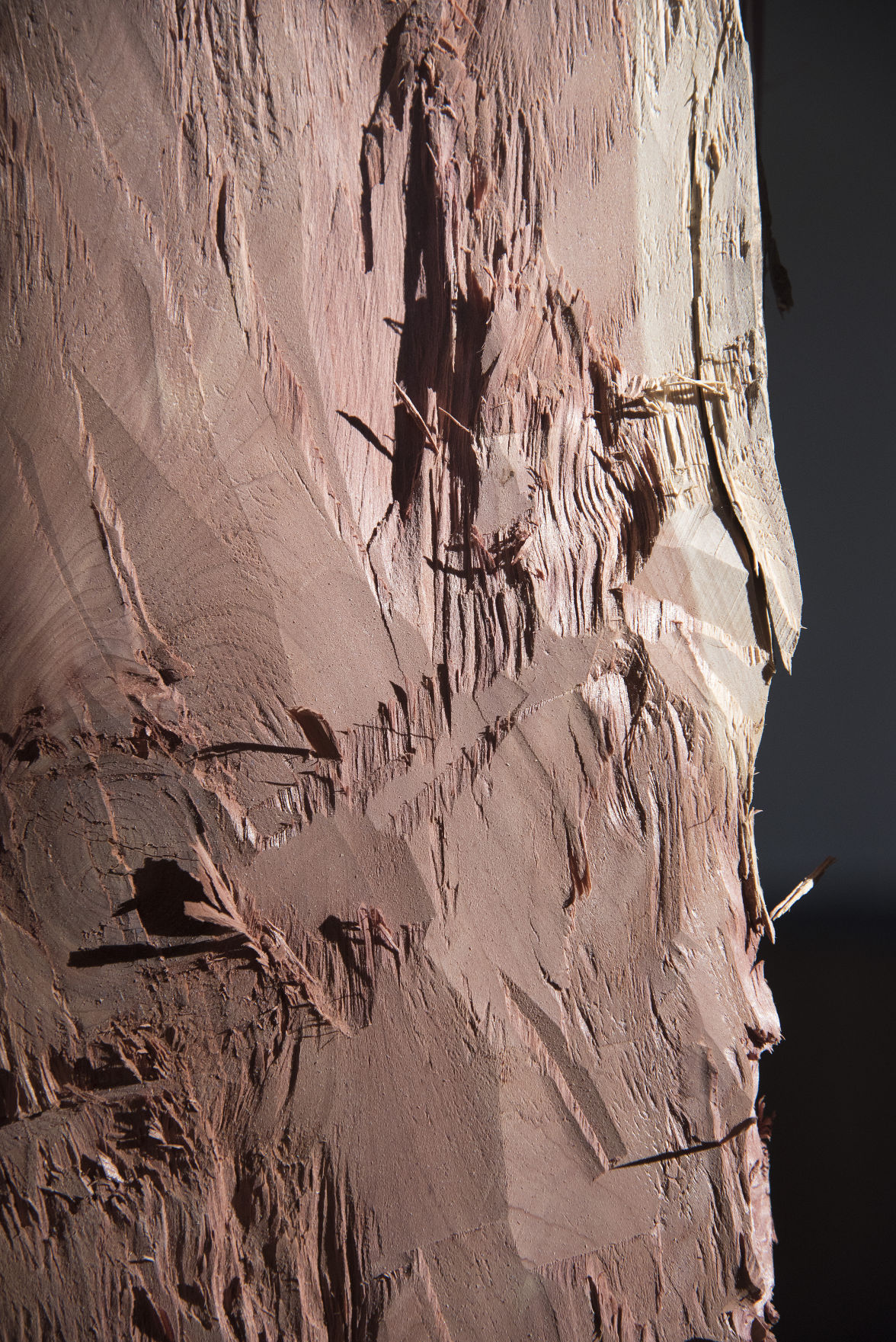 Detail of one of the hand-hewn cedar posts for the French Creole house built in the barn at Monocacy National Battlefield. 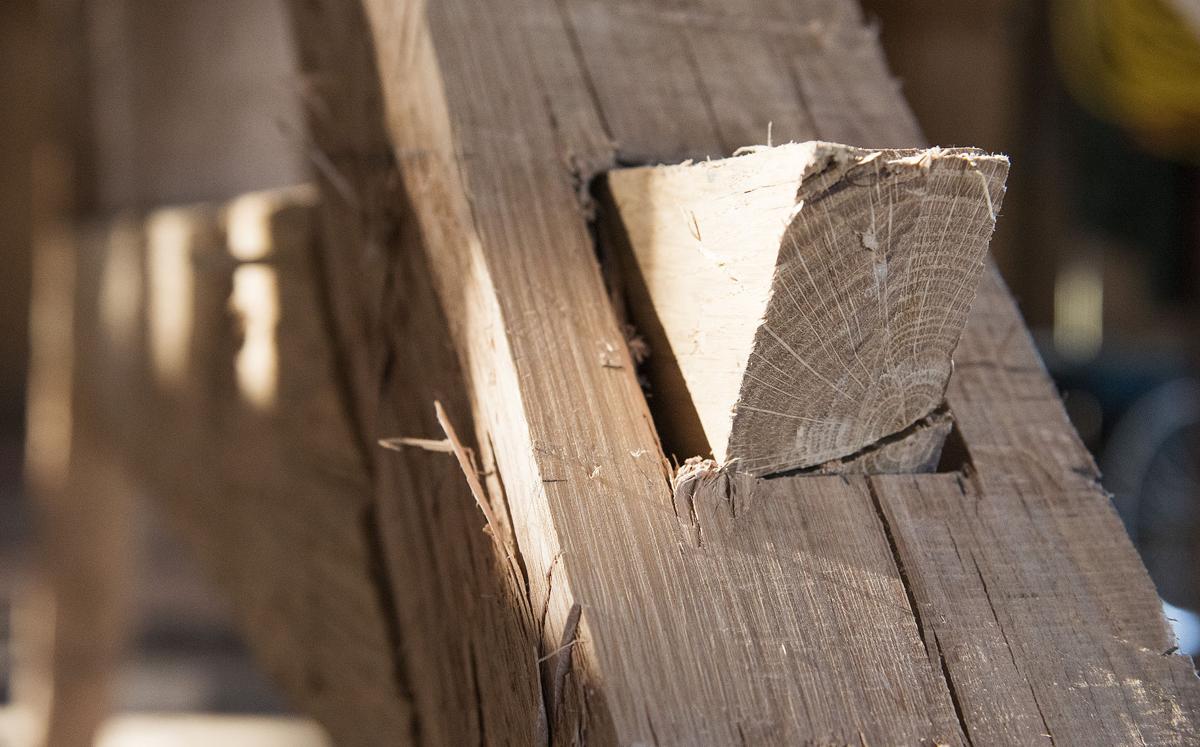 Detail of one of the mortise and tenon joints in a truss made for the French Creole house built in the Thomas barn at Monocacy National Battlefield.

Mike Cardis, maintenance mechanic and work leader for the National Park Service, talks Monday about the French Creole cabin he and a crew built at Monocacy National Battlefield.

Detail of one of the hand-hewn cedar posts for the French Creole house built in the barn at Monocacy National Battlefield.

Detail of one of the mortise and tenon joints in a truss made for the French Creole house built in the Thomas barn at Monocacy National Battlefield.

In the silence of the last day before the vertical log cabin would be dismantled and shipped to St. Louis, the freshly hewn eastern red cedar logs punctuated the air with tiny pops.

A crew of carpenters from the Historic Preservation Training Center in Frederick has spent the last five weeks inside the Thomas barn at Monocacy National Battlefield re-creating a French Creole cabin typical of early settlers along the Mississippi River.

At the end of the week, the cabin will be shipped to St. Louis to join a series of new exhibits at the museum of the Gateway Arch at the Jefferson National Expansion Memorial.

The work was a change of pace for the team of National Park Service employees, who usually spend their time restoring — rather than re-creating — history, said Stephen Jenkins, an exhibit specialist who headed the project.

“It’s kind of strange for us to build a cabin that’s brand new,” Jenkins said.

The Historic Preservation Training Center preserves and maintains national park facilities across the U.S., and works out of the Jenkins Cannery Warehouse in Frederick. Locally, the center has had a hand in preserving Monocacy National Battlefield’s 35 historic buildings, including the Thomas barn where the cabin was constructed.

Sending the crew down to St. Louis to build the cabin, however, would have been more expensive than building it locally and shipping the completed structure. The cabin was being prepared for demobilization on Monday.

Mike Cardis, a maintenance and work leader at the center, said the hardest part of the project was making the trusses for the roof of the cabin. Etched onto the floor were pencil guides that the team used as a template.

Each log was hand-sawed and hewn into shape, which put a lot of variability into the process of creating perfectly interlocking mortise and tenon trusses, he said.

As much as possible, the Historic Preservation Training Center tries to avoid using modern machinery. Some of the cabin’s beams weigh more than 300 pounds. The team maneuvers them with scaffolding and manual grip hoists, Jenkins said.

The finished product is quite stunning.

“It gives you the context,” Stubbs said. “Especially with something like this that is using historic methods.”

The 15-by-15-foot cabin is a re-creation of a type of architecture unique to the middle Mississippi River Valley, which melds medieval designs from Normandy by way of Canada and porches that originate from Africa via the Caribbean.

In the museum, the log cabin will include a 12-foot peaked roof, chimney, and chinking material between the logs on two of the four walls — while leaving the remaining two exposed so that visitors can see the vertical log design.

“They can touch it and feel it and walk through it,” Cardis said.

A handful of the French-style cabins are still standing in the U.S., but none of them are in St. Louis.

The cabin will leave Monocacy National Battlefield this week in a tractor-trailer and arrive in St. Louis on Friday, where the crew will meet it and reassemble the exhibit.

For the new chief of facilities maintenance at Monocacy National Battlefield, the park was part of the backdrop of his childhood.