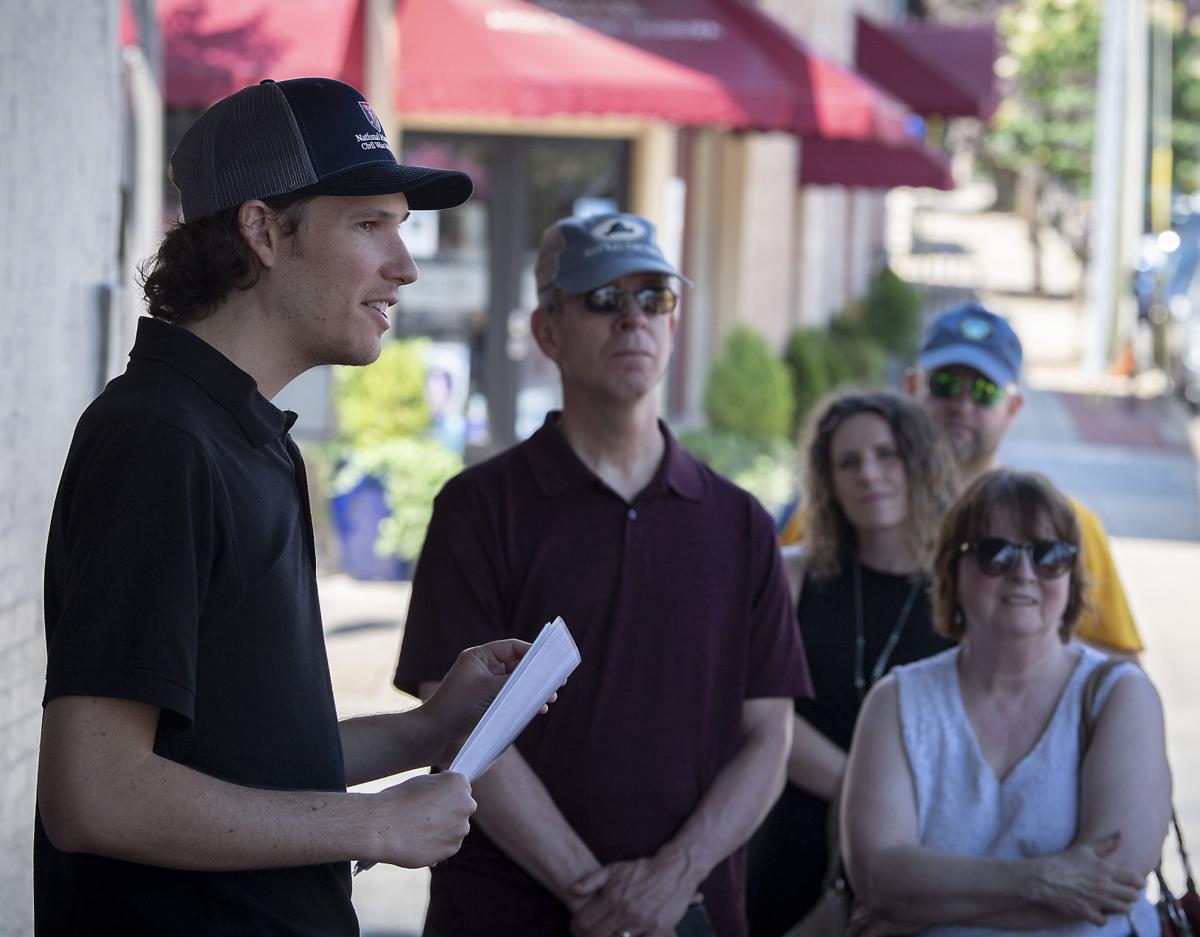 John Lustrea, education coordinator with the National Museum of Civil War Medicine, leads a group of tourists on a walking tour of downtown Frederick Saturday. Those who took the tour visited downtown locations pertaining to arts and literature during the Civil War. The museum offers a tour every Saturday and Sunday at 2 p.m., leaving from the museum on East Patrick Street. The museum saw more than 500 visitors over the Memorial Day weekend, compared to about 350 in 2019. 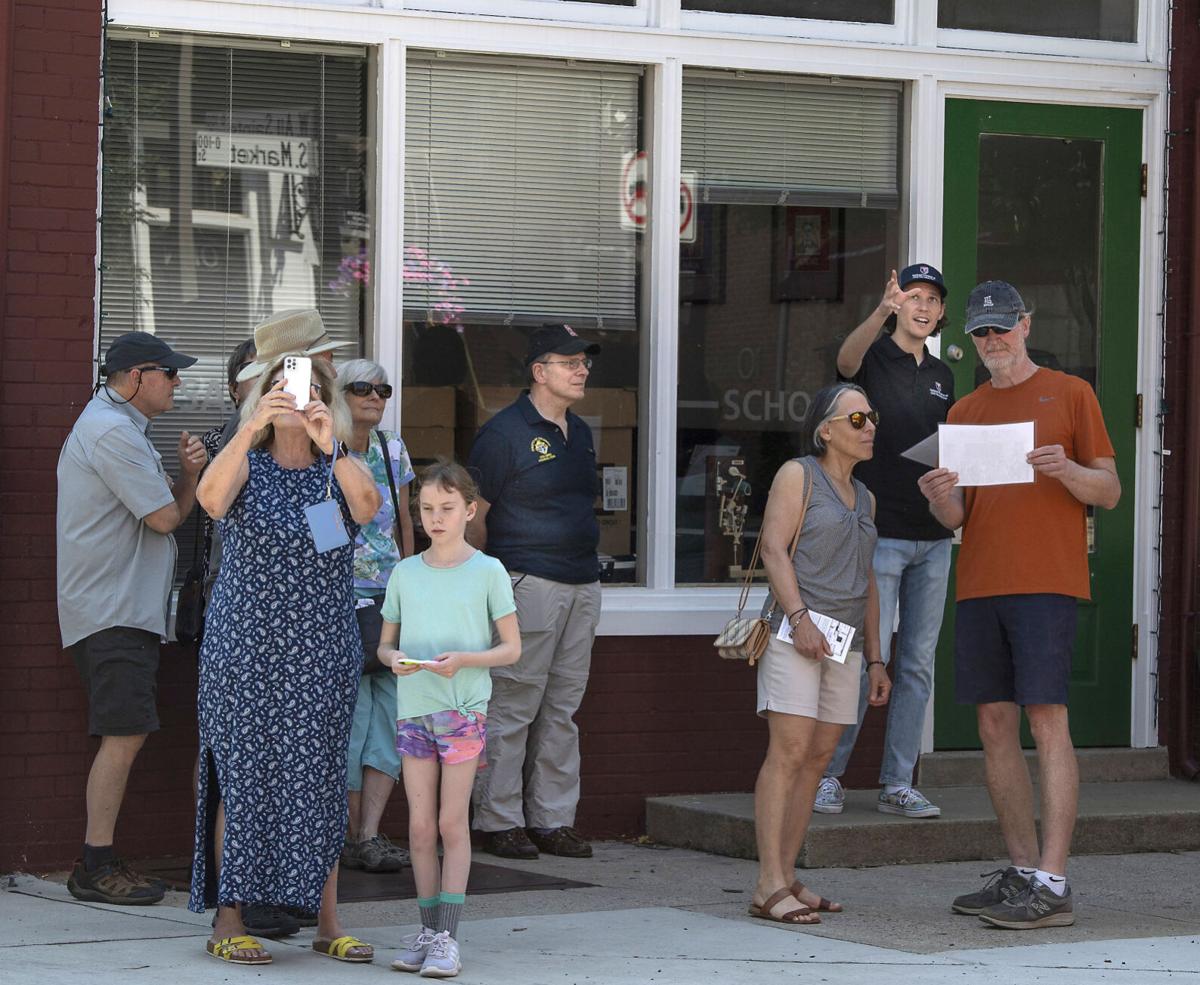 John Lustrea, education coordinator with the National Museum of Civil War Medicine, leads a group of tourists on a walking tour of downtown Frederick Saturday. Those who took the tour visited downtown locations pertaining to arts and literature during the Civil War.

John Lustrea, education coordinator with the National Museum of Civil War Medicine, leads a group of tourists on a walking tour of downtown Frederick Saturday. Those who took the tour visited downtown locations pertaining to arts and literature during the Civil War. The museum offers a tour every Saturday and Sunday at 2 p.m., leaving from the museum on East Patrick Street. The museum saw more than 500 visitors over the Memorial Day weekend, compared to about 350 in 2019.

John Lustrea, education coordinator with the National Museum of Civil War Medicine, leads a group of tourists on a walking tour of downtown Frederick Saturday. Those who took the tour visited downtown locations pertaining to arts and literature during the Civil War.

After a year when people were encouraged to stay put, Frederick County is beginning to see a resurgence in tourism.

Specifically, Dave Ziedelis, executive director of Visit Frederick, said hotels have gone from 60 percent of “normal” business in 2020 to 70 percent this year. More importantly, for hospitality and tourism professionals, that number is on the rise.

Overnight stays are an important part of gauging Frederick’s tourism success, Ziedelis said. “So the hotel data in terms of revenues, daily average rate, demand, are all trending upwards.”

The increase in tourism benefits the county’s businesses and nonprofits, which are seeing a boom in visitation.

The Museum of Civil War Medicine on Patrick Street, for instance, saw more than 500 visitors over the Memorial Day weekend, compared to about 350 in 2019 — pre-pandemic. Prior to April, the museum was only opening for appointments. But once demand increased, the museum opened up for normal admission on the weekends, which proved successful, said director David Price.

Part of the success, Price hypothesized, was the increased vaccine rollout. Another was restrictions lifting on restaurants and retail around that time.

“You don’t want to be walking down a street where there’s empty buildings and [businesses] are closed,” Price said. “You want to be able to walk down the street and have a place to choose and go into several places.”

That same theory of proximity to other attractions applies to Puerto Rico Distillery on Hughes Ford Road. Co-owner Crystal Rivera said a lot of the distillery’s visitors have come from other states. Some have been attracted to the distillery’s specialization in pitorro, a rum-based moonshine from Puerto Rico, while others have stopped in on a tour of Frederick craft beverage businesses.

“Sometimes they come, starting at our distillery and ask for recommendations for other places, or sometimes they end up here after getting recommended from another spot,” Rivera said.

Ziedelis said the craft beverage industry is one of the most resilient sectors of the county, thanks especially to extensive outdoor seating at many wineries, breweries and distilleries. He also noted that outdoor activities such as hiking and historical sites have been fairly popular.

In addition to people traveling locally, Frederick residents have been hitting the road as well. Adriana Montilla, a travel agent at the Frederick AAA office, said she’s been incredibly busy in the past couple of months.

“By now, because people are getting vaccinated, we’re receiving a lot of walk-ins, so it looks like ... they feel more comfortable going back to travel,” Montilla said.

About 60 percent of those traveling are going on domestic trips, which is much higher than normal, Montilla said. The other 40 percent are looking for international trips, mostly to destinations such as Mexico or the Caribbean.

A lot of customers are still re-booking trips from 2020, often later into 2021 and 2022. Many European countries have yet to open their borders to travelers, and cruise lines are not yet operating.

Many of the domestic trips are road trips, since a lot of people are still uncomfortable flying.

One added stress for travelers right now is the different COVID restrictions in different states and countries, said Montilla.

“For example, if you’re going to Jamaica ... you have to fill out a health questionnaire online. You have to bring your proof of vaccination,” Montilla said. “If you don’t have your vaccine, you have to take COVID-19 tests 72 hours prior to your flight.”

Future challengesThe return of large events is probably one of the largest challenges currently facing Frederick County, Ziedelis said. As the former general manager of the Frederick Keys, he knows the struggle large event venues are having firsthand. Still, he thinks they’ll make a comeback soon. Many big events, including In the Streets, are scheduled to come back this summer.

“Some of the more traditional events are coming online and being scheduled, from the Alive @ Fives, to the Festival of Arts, to the Keys baseball, so on down the line,” Ziedelis said. “We’re trending in a great direction right now with our tourism.”

There is still progress to be made, Ziedelis said, especially in terms of the hotel stays. Not only are hotel stays indicative of the larger tourism trends, but taxes on stays also fund Visit Frederick. Ziedelis said he is “cautiously optimistic” that hotel revenue could be up to 75 percent of normal by July if travel continues the way it’s going.

“The general feeling and vibe I think we’re all seeing is everyone is really drained from a year of the pandemic,” Ziedelis said. “And there’s so much pent-up energy for people to get out and do things, things that they couldn’t do in the last year because of the pandemic and because of the restrictions.”

Insuring yourself properly in a COVID and post-COVID economy

Part 2—What is limited lability coverage and how much do you need?