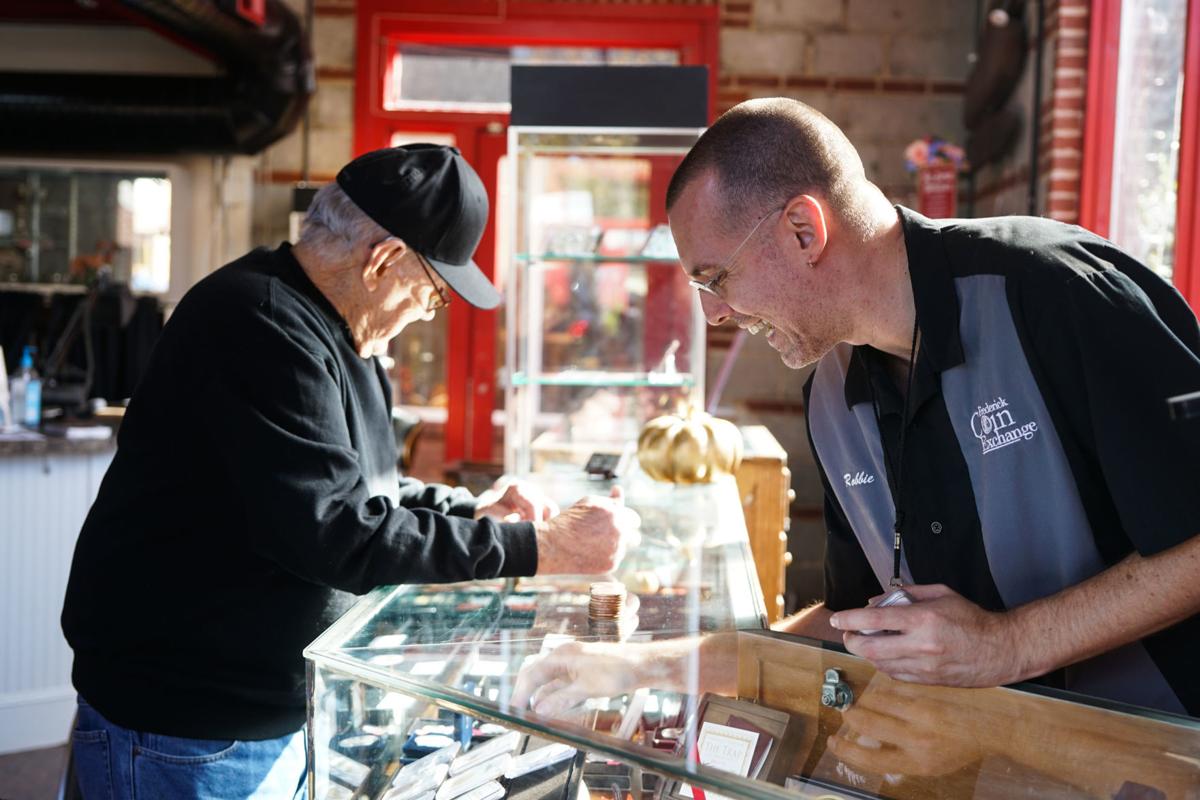 Robbie Smith, right, and Ben Kensinger talk about a selection of coins Saturday at Frederick Coin Exchange in Frederick. 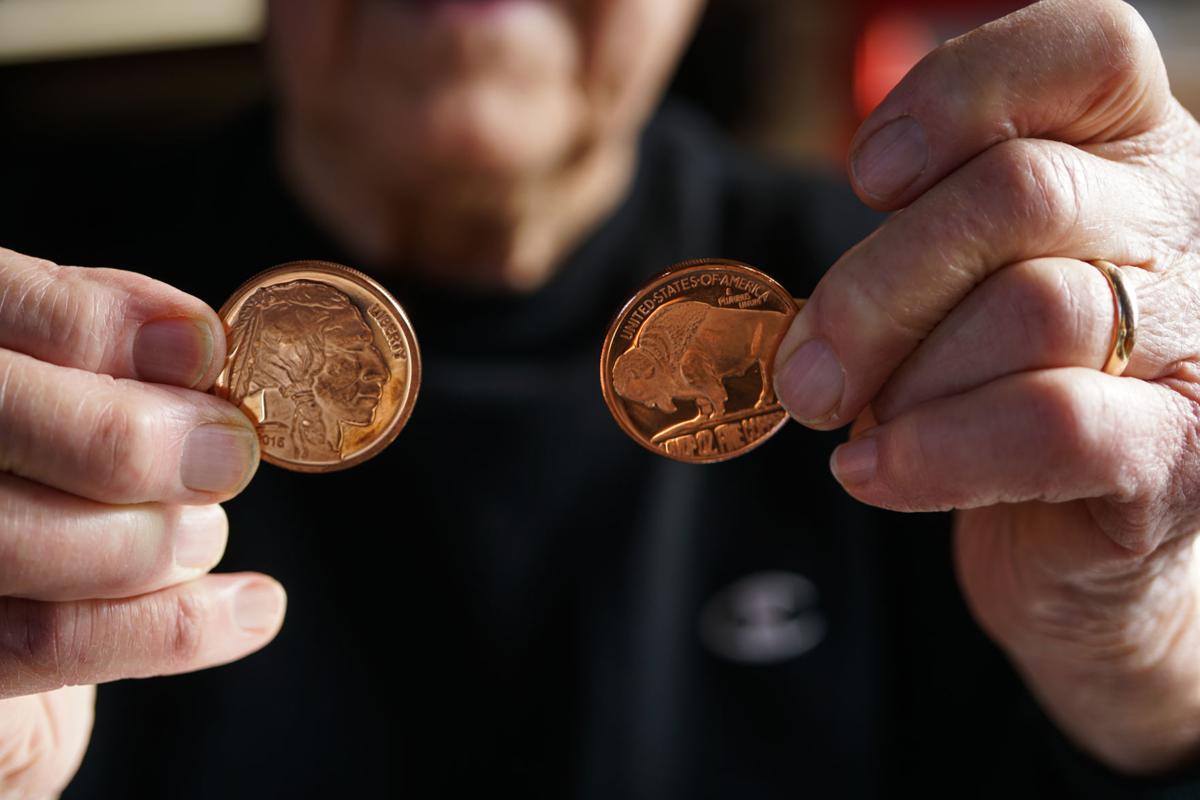 Ben Kensinger displays two Buffalo nickels he added to his collection during a trip to Frederick Coin Exchange in Frederick. 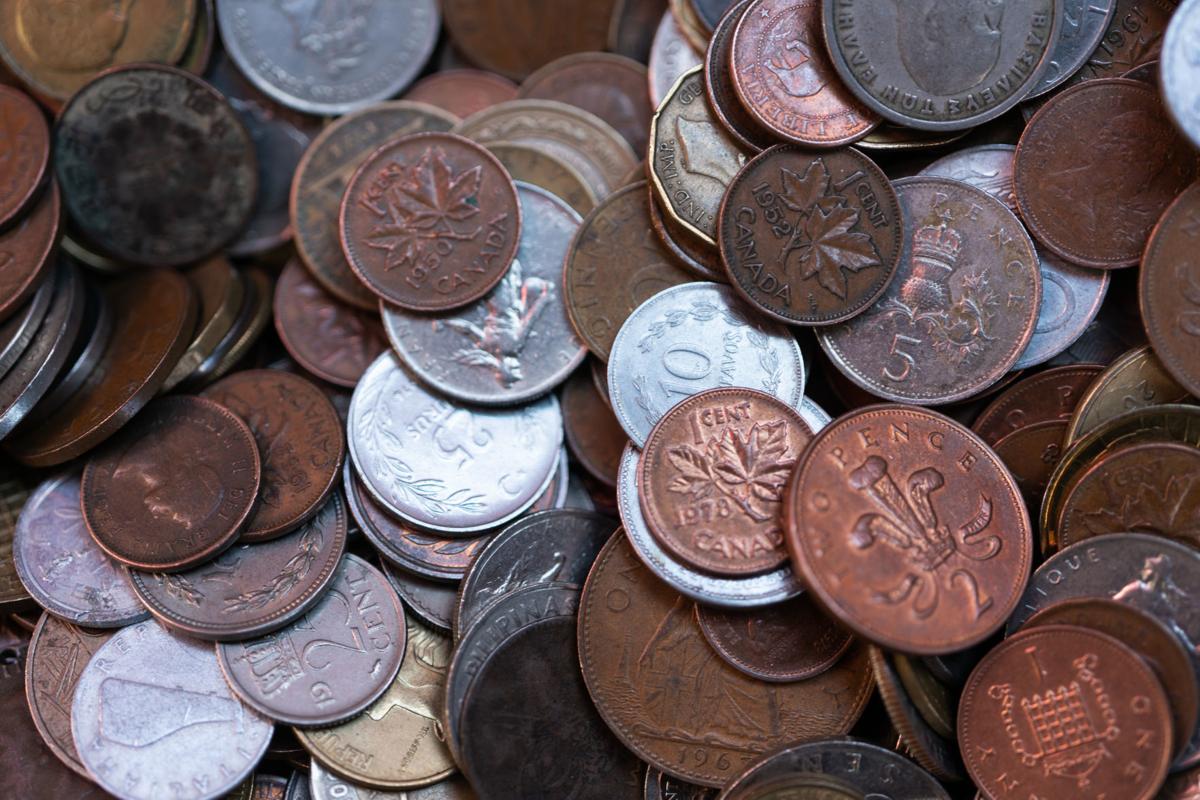 A pile of complementary coins at Frederick Coin Exchange, located in Shab Row in Frederick. 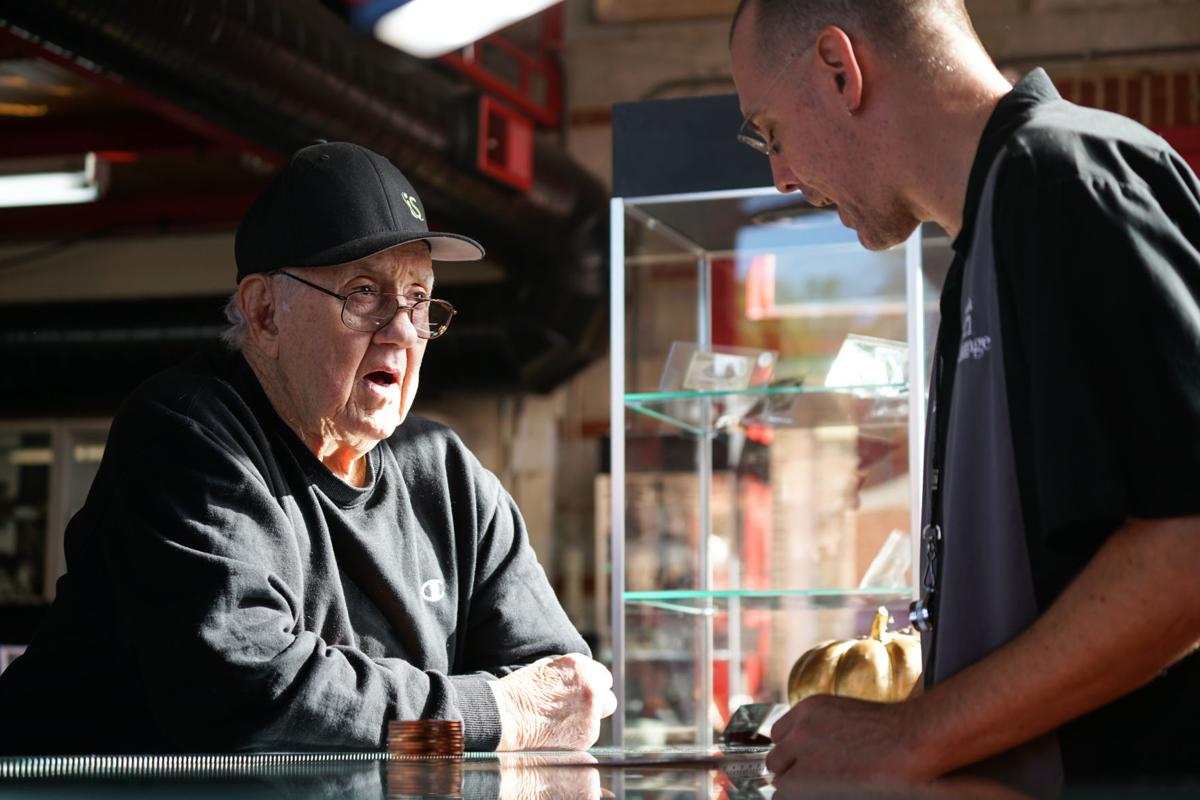 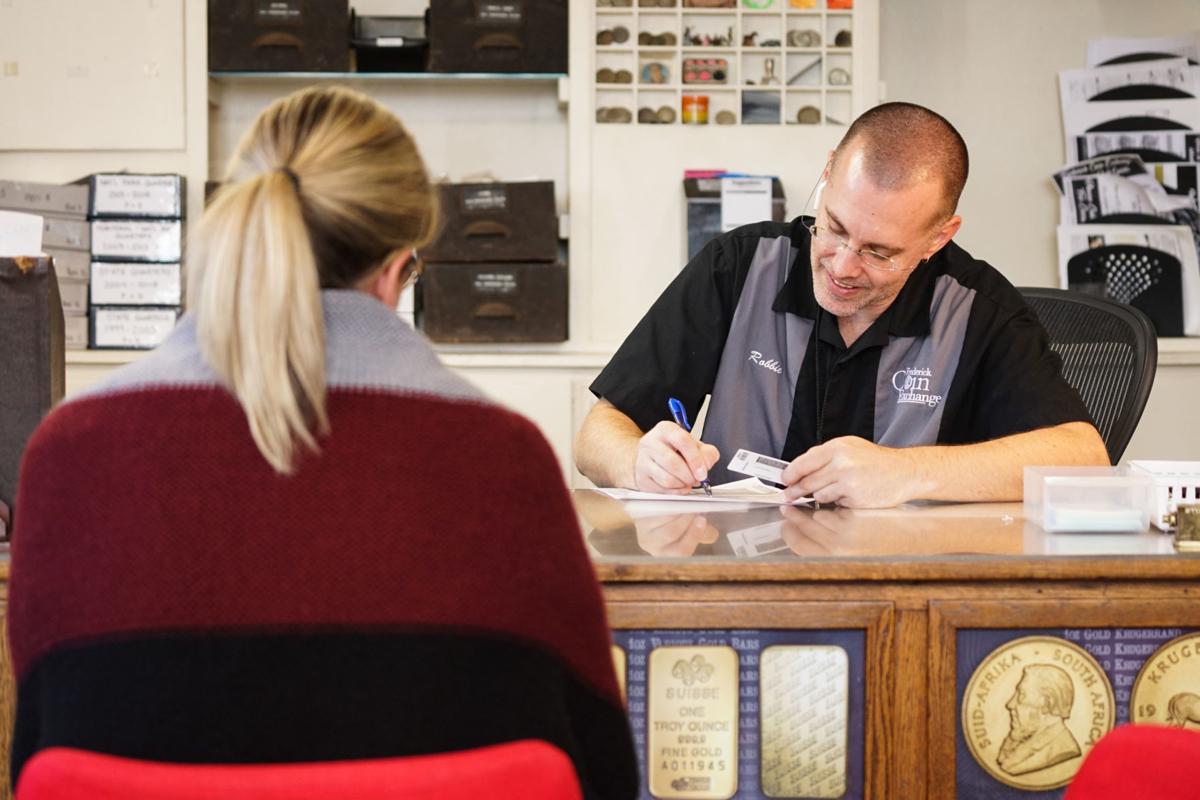 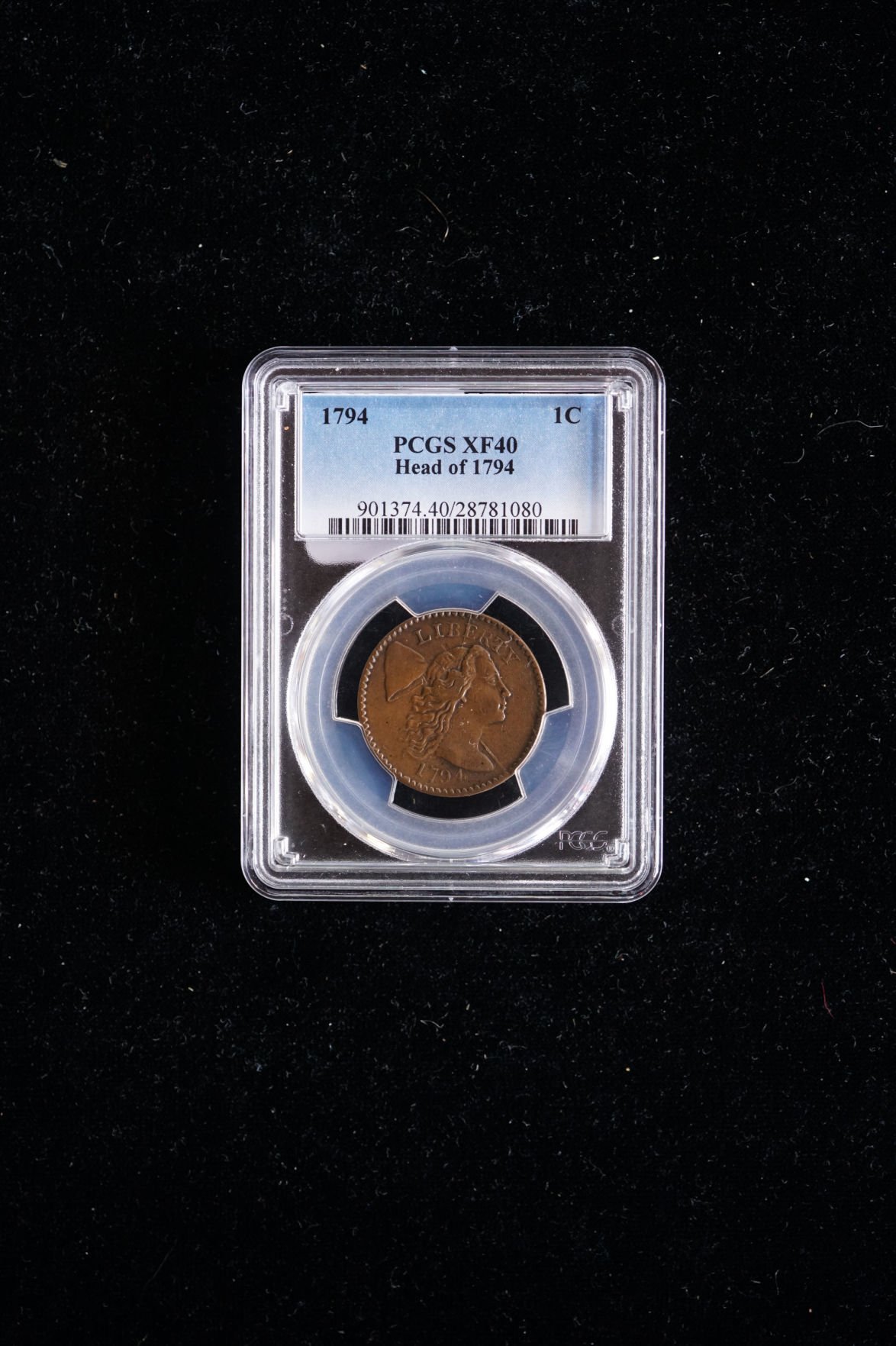 Robbie Smith, right, and Ben Kensinger talk about a selection of coins Saturday at Frederick Coin Exchange in Frederick.

Ben Kensinger displays two Buffalo nickels he added to his collection during a trip to Frederick Coin Exchange in Frederick.

A pile of complementary coins at Frederick Coin Exchange, located in Shab Row in Frederick.

The Frederick Coin Exchange was buzzing with activity Wednesday morning as patrons were having their jewelry and other metals appraised.

One man was leafing through a bin of old coins; another was looking through displays of gold and silver currency. And along the staircase near the back of the space, a TV displayed the live market for gold, silver, platinum, palladium and rhodium.

Peter Tkac, of Frederick, has been investing in rare coins for roughly 40 years. The market for coin collecting is driven by bankers, who want to suppress the value of gold and silver in order to drive up the value of the U.S. dollar.

There are ebbs and flows in the market, but there’s one reason Tkac has been investing in rare coins versus putting some of his money into banks, he said.

“I was concerned about the federal government printing endless amounts of paper currency. ... You can’t print your way to prosperity,” Tkac said.

Robbie Smith, retail manager at the Frederick Coin Exchange, said he and staff monitor the value of gold, silver and other metals minute by minute, he said.

The market, jobs report and inflation rates can affect those rates — and they can shift quickly, Smith said. He added he’s seen the price of gold either rise or drop $100 an ounce in 15 minutes.

But some things, such as the age of a coin, don’t necessarily determine its value, Smith said.

“We do get ancient coins that are over 2,000 years old, but they can be purchased for less than $20,” Smith said. “But there are coins issued today that are worth thousands of dollars. So it’s based on the rarity, how many were minted, and also the quality of the coin.”

Like Tkac, Smith said some people believe precious metals may be more valuable than printed currency in the long term.

“People are realizing the amount of currency being printed in the U.S. It’s being printed at a rate that’s just tremendous,” he said. “And some people believe, what is there to back up a dollar except good faith?”

Not everyone, however, is interested in coins as investments. Jeff Cogle and his son Shane, of Harpers Ferry, West Virginia, collect coins as a hobby.

Shane said when he’s looking for coins, he looks at their age and whether they are high-grade, as well as coins from shipwrecks. Jeff collected them as a kid, and he has enjoyed passing the tradition down to his son.

Smith said he’s noticed that in his store, as more younger people come in to collect coins.

Overall, he’s spent 30 years in the coin collecting business, and identified one point where interest started to increase: in 1999, when the U.S. Mint introduced the state quarter program.

“That really bought coin collecting back to life and as a hobby again,” Smith said. “Until the state quarter promotion, it was Beanie Babies, baseball cards, whatever the fads were.”

The state quarter program is why owner Matt Lerner opened the shop about 10 years ago, he added.

Ultimately, staying on top of the market is always a challenge, he said.

“Every day we wake up to a brand-new price,” Smith said.

What do you collect?

"The market for coin collecting is driven by bankers, who want to suppress the value of gold and silver in order to drive up the value of the U.S. dollar."

This statement makes no economic sense. The coin collecting market is driven by collectors, [and perhaps some investors]. Without collectors, there won't be a demand for coins. Bankers aren't manipulating the precious metals markets to drive up the USD. Any investor wants to be on the right side of the market [which ever is rising, gold, silver, or the USD].

The Frederick Coin Exchange is a great store. The people there are friendly and honest.

I am curious about this statement:

"The market for coin collecting is driven by bankers, who want to suppress the value of gold and silver in order to drive up the value of the U.S. dollar."

I've done quite a bit of reading about coins and I've never heard that before. How is that supposed to work? How does an increase in coin collecting drive the value of gold and silver down?