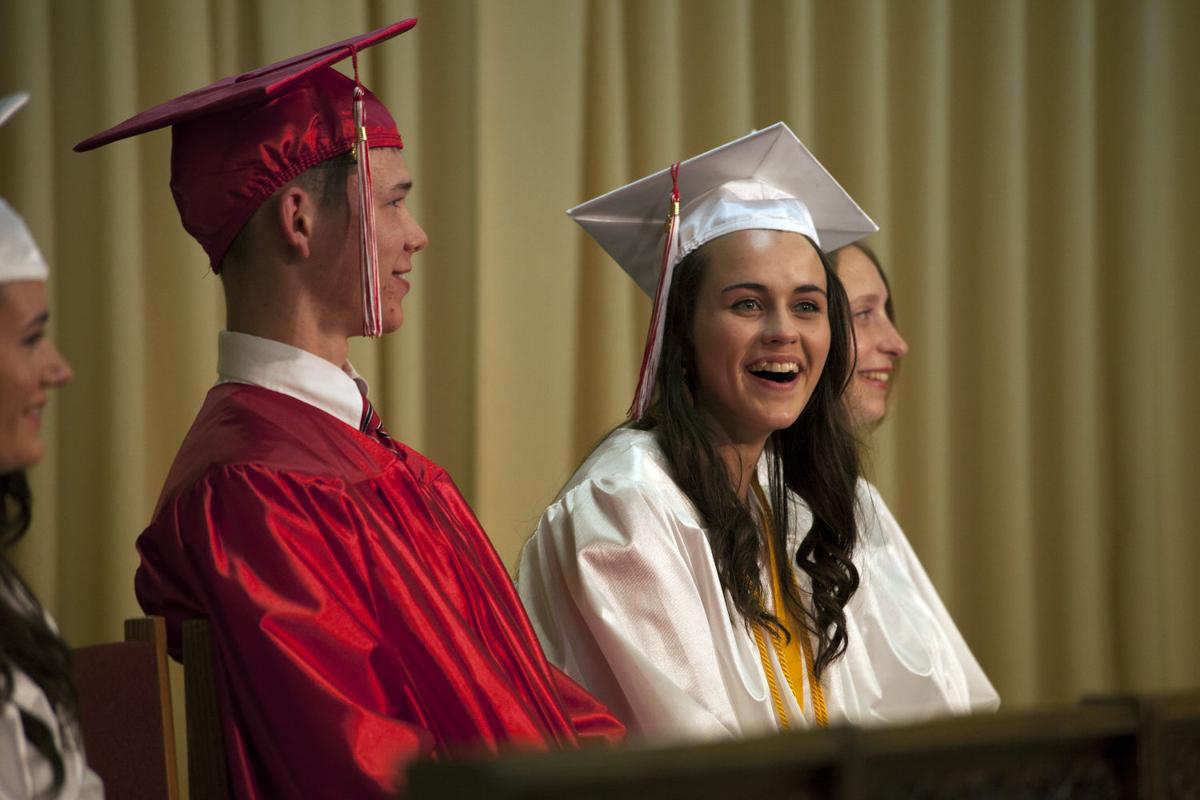 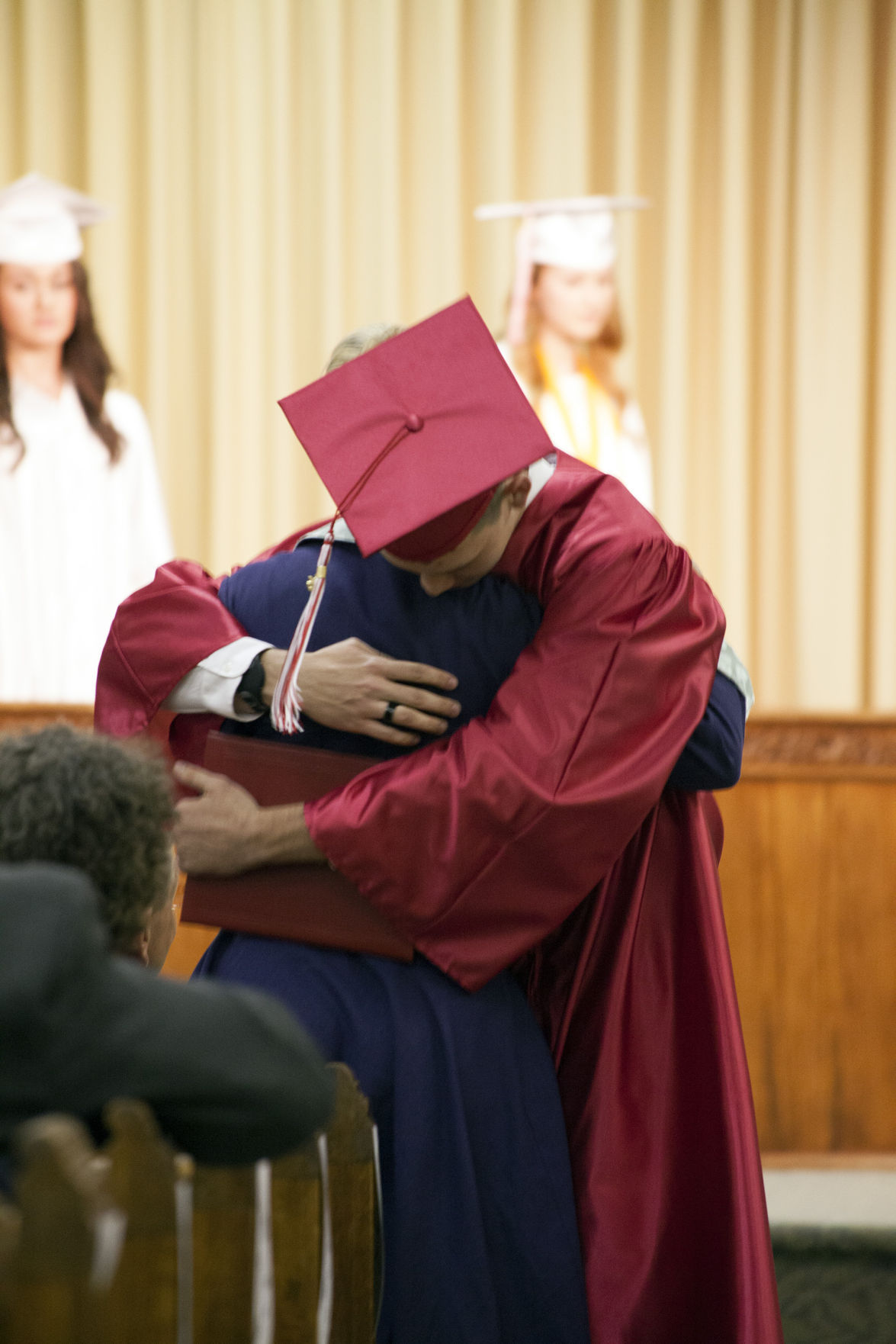 Chance Christian Davis embraces a loved one after receiving his diploma Friday evening. 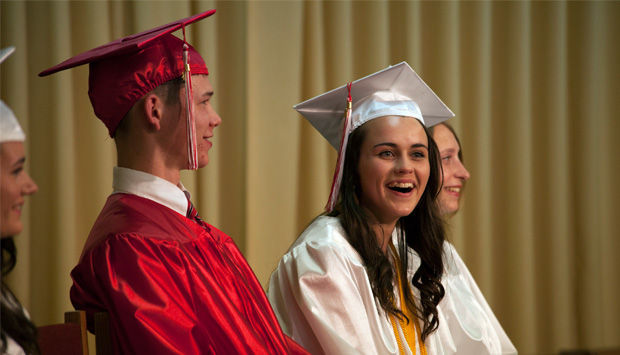 Chance Christian Davis embraces a loved one after receiving his diploma Friday evening.

The future looked bright for the seven graduates of the Frederick Christian Academy’s Class of 2015 as the small group gathered with family and friends Friday evening in the school’s auditorium.

Some of the students, such as Kaitlyn Thompson, 18, and co-valedictorian Kathryn Corselius, 17, carried on long family traditions by attending the academy since prekindergarten — a member of Thompson’s family has been enrolled at the school since the fall of 1987, while both of Corselius’ parents, David and Cheryl, are graduates. Others, like Chance Davis, 17, came later on to finish their studies on the road to higher education and the rest of their lives.

Regardless of years spent at the school or family history with the institution, all of the graduates considered one another family members.

“I’m an only child, but they’re all like my siblings,” said Alixandra Hunter, 18, of Thurmont, who was co-valedictorian with Corselius. “We all know each other so well [in the graduating class] and we all know the younger students as well.”

In his speech at the lectern, Davis shared his experience joining some of the longer-established students four years ago when he began classes at the academy. While he was nervous at first, he joined the soccer team and was immediately befriended by two other young men.

“The warm welcome continued as school began, from the teachers and the students, they all made me feel right at home, it was a blessing to be a part of such a tight-knit school,” Davis told the audience with a smile.

With the strong ties and familiarity bestowed by such an intimate educational program centered on knowledge and spirituality, graduation — while undoubtedly happy — was also somewhat bittersweet for some of the students preparing to embark on the next stage of their lives.

“It’s more of an end of an era for me, because I’ve been here for so long,” Corselius said as her mother, who also teaches mathematics at Frederick Christian Academy, gave her a reassuring hug. “It’s sort of surreal.”

For others, such as Samuel Swope, 18, Friday’s commencement was another exciting step in his young life and a chance to move that much closer to his goals; Swope plans to attend Penn State Mont Alto to get a business degree in the hopes of opening his own small-engine mechanics shop someday.

“It feels great to, after 14 years of hard work, to finally be here,” Swope said. “To finally make it to this point after watching so many of our friends graduate over the years, it’s exciting.”

Much of Friday’s ceremony centered on the allegory of life as a journey, with two of the students quoting author J.R.R. Tolkien’s musings on life’s progress. The class’ speaker, John C. Vaughn, president of the Fundamental Baptist Fellowship International in South Carolina, summed his statements up in a similar vein.

“The path that led you here is now finished, and the path that will lead you on now begins,” Vaughn said, encouraging each of the students to continue in their faith and trust in God, no matter what hardships or challenges await them on the road ahead.

Good to see no dancing in the ceremony. These students would make out in the work a day world.