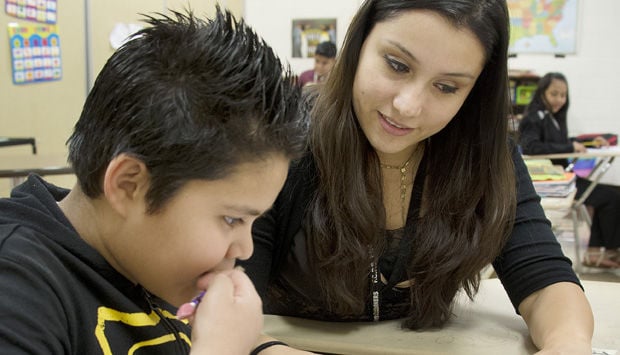 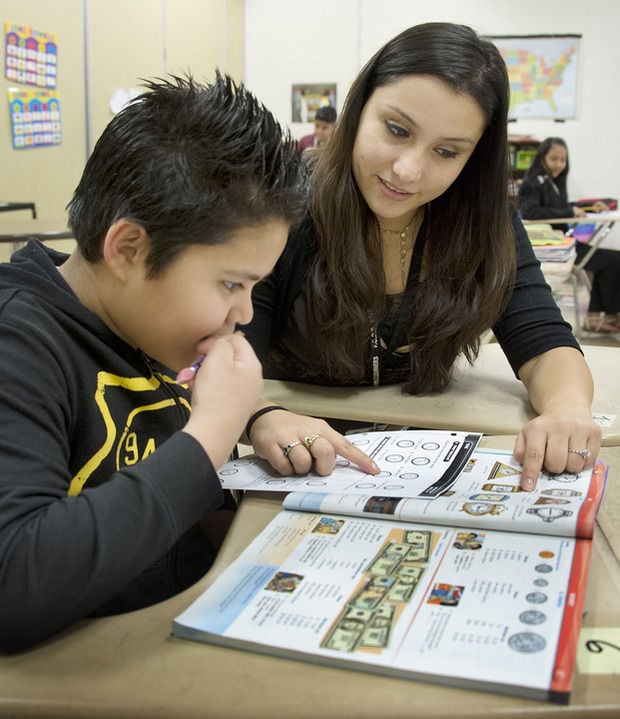 This is part four of a five-part series chronicling the daily experiences of Frederick County Public Schools employees.

No games. This is your education.

So Yvonne Lopez tells a group of middle-school boys on computers in the back of her English Language Learners classroom. She is passing back homework, her pointed reminders that the students should turn in their worksheets doubling as a life lesson in work ethic.

Lopez teaches in the ELL program at Monocacy Middle School, which serves sixth- through eighth-graders who need the most basic language skills to succeed in school and society.

"I like to really connect with kids and make them think about their lives ... they're not there yet," she said of the youngest children.

The fourth-year educator taught elementary students for a year before becoming a long-term substitute. This is her first school year at Monocacy.

For Lopez, who was raised in a Spanish-speaking Los Angeles household, becoming an ELL educator was a natural fit. Her childhood was filled with grammar mistakes and broken English, and she wishes helping others in the same position was her path from the start.

"It makes me feel good to teach these kids the language they need to know for their lives," she said.

She wakes around 5:30 each morning to arrive at school by 7 a.m. and leaves around 4 p.m. on an average day. Time before classes and in planning periods is used for photocopying and team meetings, work before the real work begins. Grading often comes home to Montgomery County, work after the real work ends.

Her class of 13 is primarily Spanish speakers, with one girl from Africa who speaks French. Though Lopez can help most students in their native Spanish, working with the Francophone is more challenging since she doesn't speak French. For those students, working with pictures, diagrams, hand gestures and Google Translate is even more important to make sure as little as possible is lost between languages.

Lopez also lends a hand to nine students in a mainstream science class. Those are the more advanced children who do well with everyday conversation and reading basics, but might need pointers on difficult or unfamiliar terms found in science curriculum.

She sometimes converses in Spanish to her students if she spots them in the hallway, but largely tries to nudge them into more and more English. Otherwise, she said, they see her only as a translator instead of a teacher.

Her 8:40 a.m. class begins as a cacophony of Spanish and giggles. The bunch is a bit restless, so she tries convincing them to stay silent for an entire minute. No such luck. One boy refuses to take off his sweatshirt hood and is removed to the hallway until he decides to obey the rule.

They start with a warmup of naming and valuing U.S. coins, using popsicle sticks to call on students when they get antsy and distracted. An hour later, they settled into pairs with worksheets on telling time and counting money. A Spanish-speaking instructional assistant comes in as backup.

Despite the quirks of acclimating excitable middle schoolers to new vocabulary and grammar, Lopez is pleased with how far they have come.

"They're learning first-grade stuff, but I see progress every day, both academically and behaviorally," Lopez said. "At the beginning, some of them couldn't even say 'hi.'"

Around 40 ELL students come to Monocacy for that specific program, but Lopez adds that more around the county choose instead to stay at their primary school. Parents can refuse ELL services so their child won't have to travel to Monocacy Elementary School, Monocacy or West Frederick middle schools or Frederick High School.

Many of Lopez's students arrive with troubled pasts and a different view of education: some suffer from post-traumatic stress disorder after fleeing violent situations in their home countries, and some haven't been in a classroom for so long that they need to be retaught norms and behaviors.

"They think they can get away with more because there is less-violent discipline than they've experienced in the past," Lopez said, adding that they pick up bad behaviors from mainstream peers.

She said their parents are responsive and involved in their students' education, as many countries see teachers as second parents deserving of utmost respect.

Classroom management is a minute-by-minute exercise in keeping things calm, friendly but firm. Most days, she said, they are engaged and respectful of her and each other.

Winding down the 90-minute block, a boy asks in English how to spell "happy birthday" and is soon poking out the letters on a computer: a birthday card for an American schoolmate. It's one way that English peeks through more and more in a room overflowing with Spanish chatter.

Coming Friday: A day in the life of a custodian JoAnne Green, Middletown Primary School