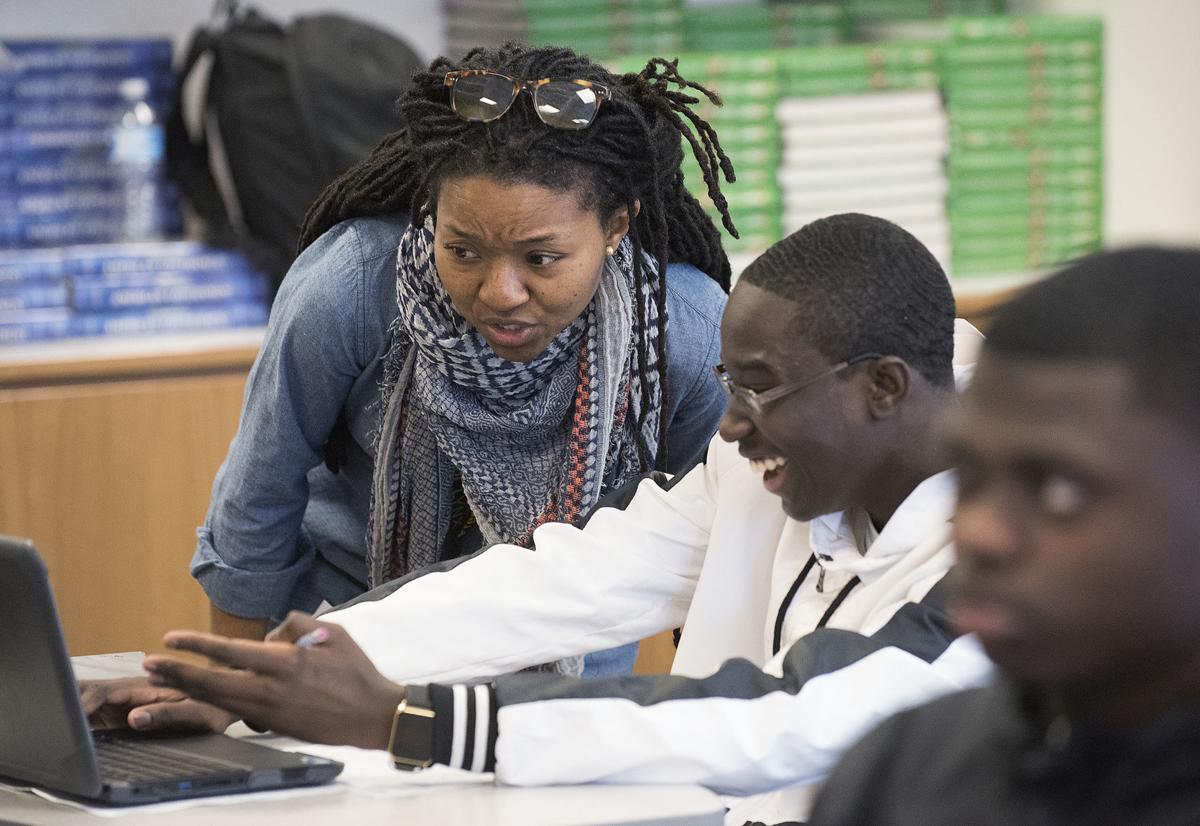 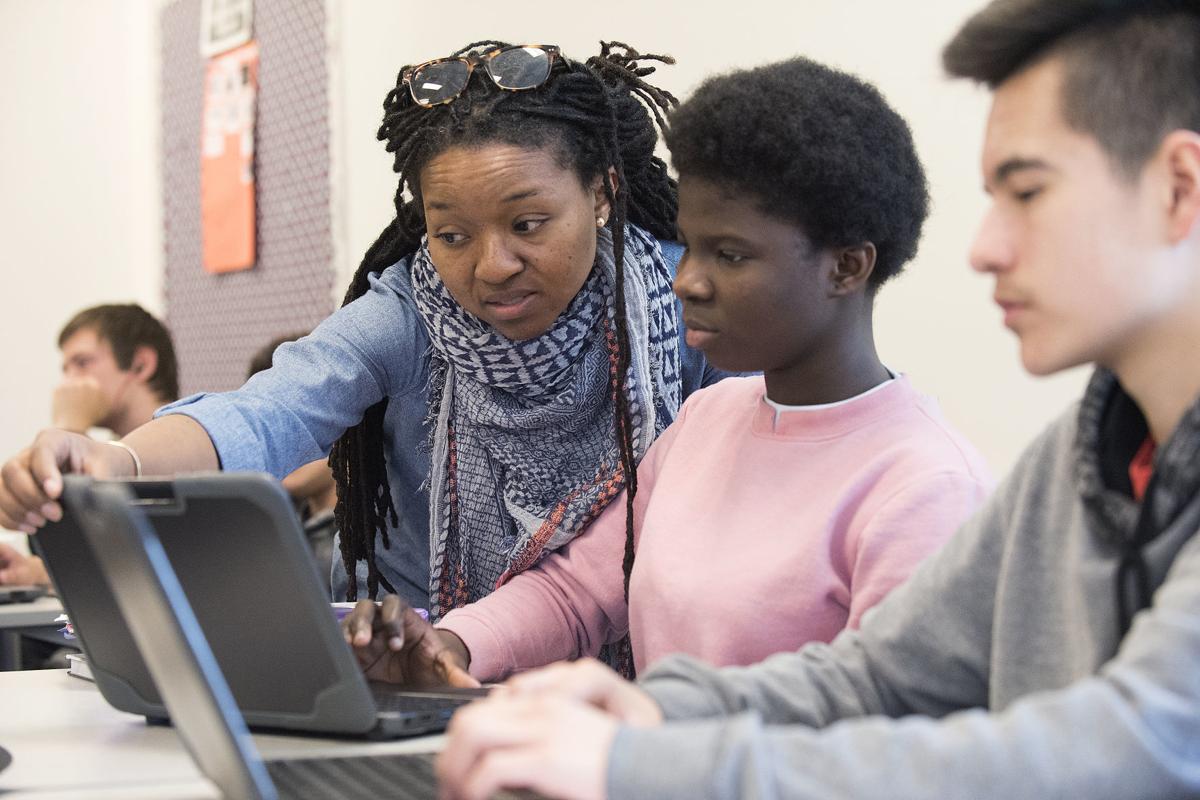 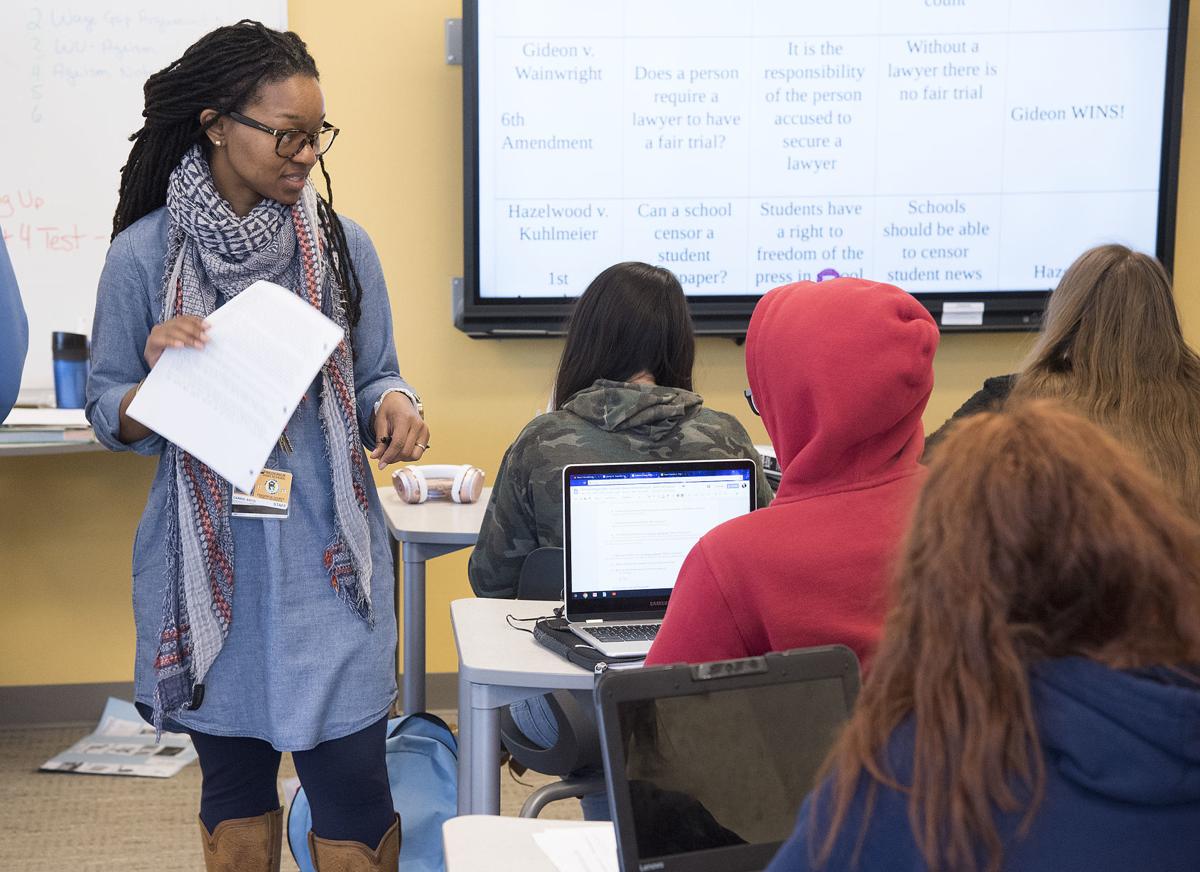 About a dozen Frederick High School freshmen sauntered into the media center, taking their seats in front of a table with firefighter gear on top.

Marlon Moran, a LYNX advocate at the school, spoke to the students, who are part of the Linking Youth to New Experiences program, about the presentation they were about to see.

Students in the program are often invited to attend trips or in-school experiences to learn about future careers they might be interested in pursuing.

On Monday, Zoe Carnegis, one of the LYNX students herself, presented along with Bobby Wells, a chief at Independent Hose Company, to the students about the potential for careers — or volunteer opportunities — in the fire service.

After seeing several of the experiences, Carnegis became interested in putting one together herself, because of her active volunteering in the department.

“I know what the fire service has done for me, and it’s given me another family,” Zoe said. “It’s made me feel part of a whole. And I wanted to show my peers what options there are and how it could possibly do the same for them.”

Moran, who is one of four advocates for the program, applauded Carnegis’ initiative. The fire department is one of 65 business partners the LYNX program has developed this year along — most of which have either visited students or hosted them at their own facility.

Before each “LYNX experience,” as they’re called, advocates meet with the partners to discuss what they hope will be part of the program.

“We always want them to show how their coursework can help them in that job,” Moran said. “So how the fire service relates to science, or how it relates to art. Just so they can see that no matter what they’re interested in, they can find a career.”

As the first year of the LYNX program winds down, the advocates have developed a stronger idea of their role in the program and what the program is. But they’re still continuously making tweaks to improve it.

One of those tweaks occurred Monday as Moran had an entire class attend a LYNX experience because several students had yet to attend one this year. The students who had to complete makeup work went to a separate corner of the library where they could work quietly.

“We want everyone to have at least one LYNX experience,” Moran said. “We haven’t done this before, but I think it worked really well.”

Down the hall, Kathy Koops, another LYNX advocate, met with three freshmen who are hoping to earn fitness for life credit in the credit by demonstrated mastery program — a program that allows students to earn course credits through outside activities.

“As active as these kids are in what they do, there’s no reason they should have to take the course,” Koops said. “They understand fitness and health goals. And this program allows them to show that without taking the class.”

The LYNX advocates rarely have two days that look the same. But one of their primary roles in the school is to serve as co-teachers in several classes throughout the day.

For Moran, he spent Monday visiting Beth Sands’ English class, where the students have been reading “To Kill a Mockingbird.” During a station rotation session, Moran supervised students working in a co-lab outside of the classroom as they watched and read a court scene from the book and movie.

Moran worked with the students as they identified the differences between the movie and the book in that scene.

Artis meandered through the desks to stop and help students as they answer questions on a worksheet about the importance of the defendant being provided a lawyer to have a fair trial.

Sandy Zimmerman, another advocate, co-teaches in five classrooms. In her co-teaching role, she has been given the name “abuela,” which is Spanish for “grandmother,” from some of her students.

“I was a little confused at first,” Zimmerman said. “But one student told me ‘you know they’re saying it as a term of endearment, right?’ And it just goes to show the relationships we can build with these students and how comfortable they feel with us.”

Get to know the advocates

Frederick High School's four LYNX advocates are responsible for helping incoming freshman transition to high school. They all took different paths to get to their position, but have one common goal — helping make a better life for students.

Kathy Koops: Koops, who graduated from the University of Virginia with a degree in nursing, joined FCPS as an instructor at the Career and Technology Center in 1997, where she taught nursing and biomedical sciences.

She fell in love with the profession and thought the LYNX program was the perfect combination of her love for students, and opening doors for careers for students.

Marlon Moran: From Southern California, Marlon Moran parlayed his fondness for performance art into a four-year stint with the U.S. Marine Corps Drum and Bugle Corps, in which he was stationed in Washington, D.C. In his time in the military, Moran developed a passion for history, which led him into teaching.

After spending time teaching history, Spanish and music at Brunswick and Urbana high schools, Moran decided his skills could be put to better use in a program like LYNX.

"Students at Urbana are going to be successful no matter what," said Moran, who immigrated to the U.S. and earned citizenship. "There are a great number of students here who don't know if they can be successful. And I want to show them there is a way. I want to be that resource."

Sandy Zimmerman: After graduating from Towson University with a degree in education, Zimmerman veered from the traditional path of becoming a teacher. Instead, she joined Marriott Corp. and worked as a recruiter and corporate trainer along with several other Fortune 500 companies.

But when she was laid off in 1997, she faced a crossroads. If she was going to put her degree to use, this was the time. With a passion for the school-to-careers pipeline, she began working as a home economics teacher. When the LYNX program started, Zimmerman saw it as an opportunity to bring her work in the corporate world, and as a teacher full circle.

"One of the greatest things has been that I kept my rolodex from my years in that field," Zimmerman said. "And that's been pivotal in helping us develop business partners."

Carrie Artis: Growing up, Artis was always told women could only become teachers or nurses. After she graduated from Frederick High School in 1995, she went to college and eventually landed a job as an economist with the Internal Revenue Service and eventually the Federal Maritime Commission.

But she couldn't shake her desire to teach. She returned home to teach in the district that helped her reach her goals. After working in teacher recruitment for four years, the LYNX job became available. She saw it as a sign to do what school did for her.

"This is my community," Artis said. "My kids are at West Frederick [Middle School] next door. We're vested in this community and I want to help these kids achieve their dreams."