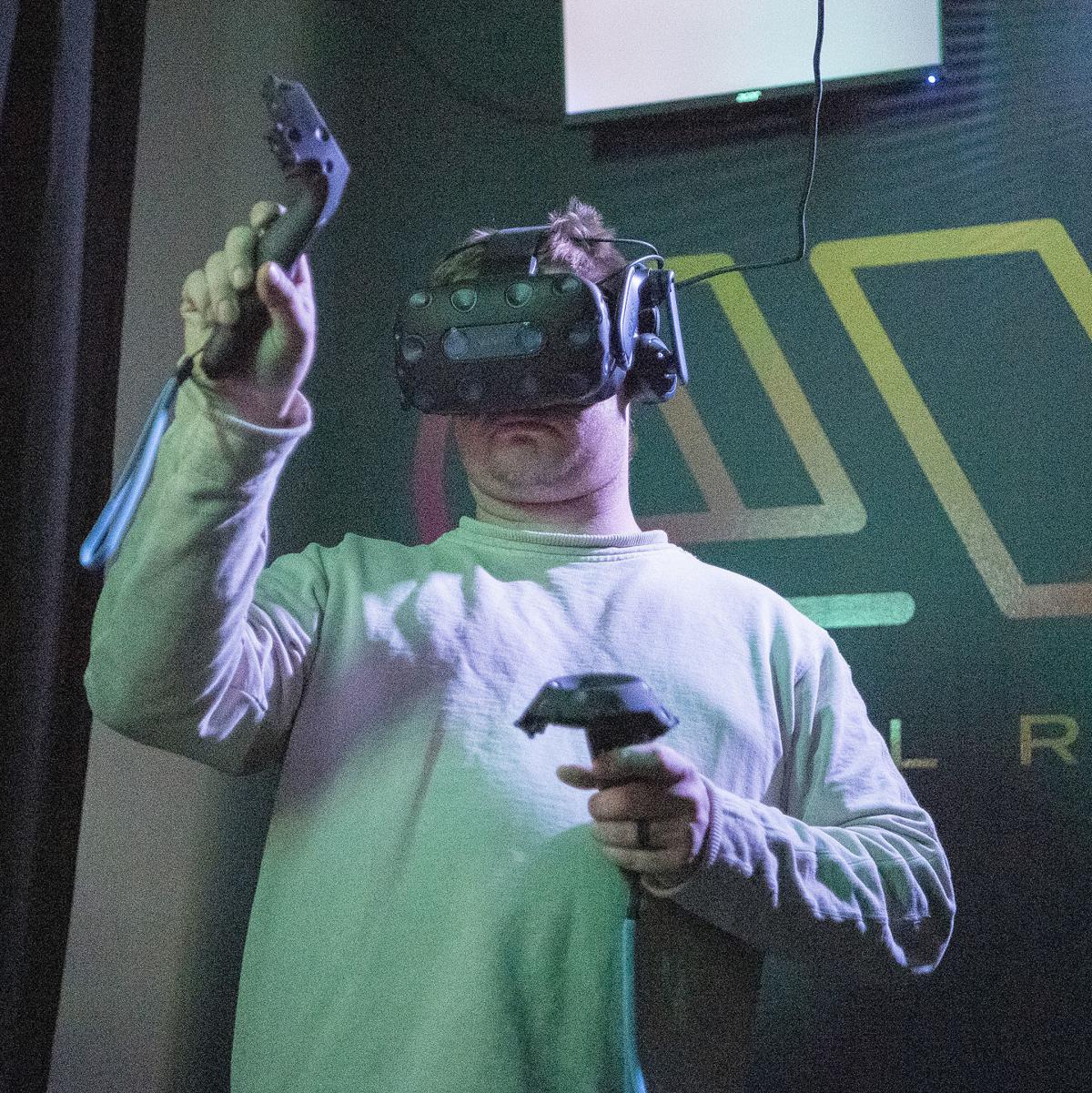 August Hinz wears a virtual reality headset and holds wands as he experiences a VR program depicting the scenes in Memphis, Tenn., shortly after Martin Luther King Jr.’s assassination in 1968. 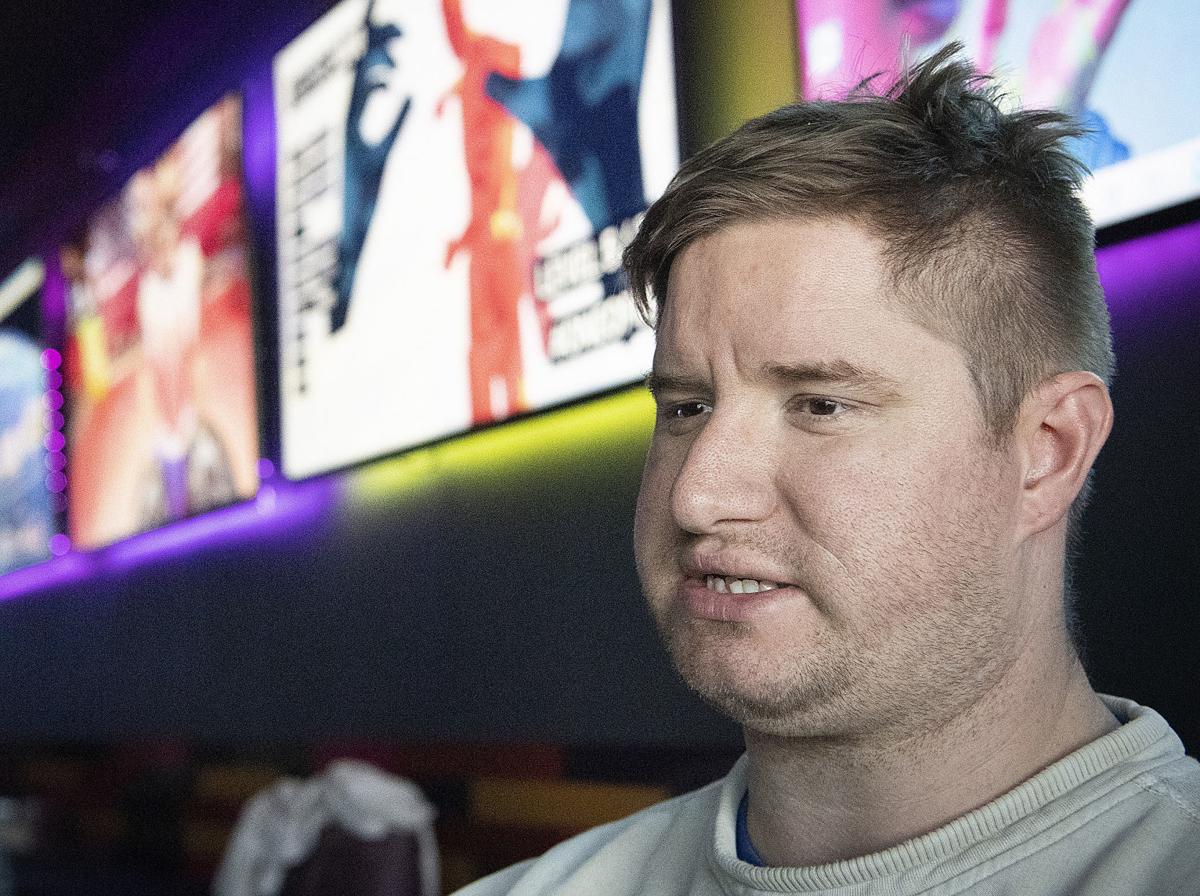 August Hinz shares his thoughts after he experienced a VR program depicting the scenes in Memphis, Tenn., shortly after Martin Luther King Jr.’s assassination in 1968.

August Hinz wears a virtual reality headset and holds wands as he experiences a VR program depicting the scenes in Memphis, Tenn., shortly after Martin Luther King Jr.’s assassination in 1968.

August Hinz shares his thoughts after he experienced a VR program depicting the scenes in Memphis, Tenn., shortly after Martin Luther King Jr.’s assassination in 1968.

Suddenly, you’re on a street in Memphis. The year is 1968 and you’re a part of the Memphis sanitation workers strike. There is a picket sign on the ground below you that reads “I Am a Man.” You pick it up and join the protest as a military tank rolls down the street in front of you.

In "I Am a Man," a recently developed virtual reality (VR) experience at the shop @VR, users are immersed in Memphis scenes as an African-American man during the civil rights movement. The program even allows you to experience the hours after the assassination of Martin Luther King Jr.

“I Am a Man” debuted at the VR shop on Frederick's Golden Mile on Monday as the nation marked Martin Luther King Jr. Day.

“It was amazing,” said David Butler, one of the first people to try the program at the Frederick location. “It was good because it interweaved history with immersion and seeing certain aspects of time.”

The simulation runs about 15 minutes and takes users through a variety of videos, sounds and scenes. One has users standing in a kitchen. Newspapers with headlines about the sanitation strike litter the table. Users can look around the kitchen and pick up the materials and read them.

In another scene, users are on the same Memphis street where the strike took place, but now it’s dark. A trash can nearby is on fire and the sky is filled with smoke. It’s the night King was assassinated, and in a shop window, televisions are showing Robert F. Kennedy giving his famous speech about what had taken place just hours earlier.

“It really kind of puts you back in that moment and place and it gives you a different view instead of just watching on TV, a documentary,” Shantay DeMar, owner of @VR, said. “It really makes you feel that moment.”

“I Am a Man” came to DeMar’s shop by the way of Desiree Tucker, a Frederick resident and founder of Women Solve, a group that works to make sure diversity and inclusion are at the forefront of Frederick County Public Schools.

Women Solve is working to get more lessons with diverse perspectives introduced into the curriculum at FCPS, The News-Post previously reported.

When Tucker learned about the VR simulation, she immediately got in touch with the developer, Derek Ham, an assistant professor of graphic design at North Carolina State University.

“I had been talking to [Ham] for a while and telling him that I really wanted to bring this to Frederick County,” Tucker said.

When she learned of DeMar’s new VR shop, she knew it was the perfect opportunity and connected the two men. Soon, the file for the simulation was sent over to DeMar. Test runs were done, a few kinks worked out, and the simulation was ready to debut on the civil rights leader’s national holiday.

Tucker wanted as many people as possible to experience the new program, so she planned an event at DeMar’s shop and invited friends and family.

“What Dr. King did and what he accomplished and stood for, getting [people] to understand that and to be in that moment and to feel what it felt like to be in the skin of a person back then ... to me this just embodies what it's about,” Tucker said.

August Hinz was invited by Tucker and tried the simulation. He said he learned a lot.

“I had no idea about the sanitation strike or anything like that, so it was pretty cool to learn,” Hinz said. “It was cool to see little snippets from newspapers and read those while you were going through it.”

Tucker hopes that eventually, the experience will be used by FCPS for students to learn history through a new lens.

“I would love for Frederick County to be at the forefront of that,” she said.

Hinz thinks using it as part of school lessons is a great idea.

“Learning information that way was a lot cooler than sitting in a museum theater and staring at an old film reel,” Hinz said. “Walking through it and actually having a chance to interact and see it was pretty cool.”

DeMar agreed. He said he felt like he a part of history.

“Being in the picket sign line really kind of touched me,” DeMar said. “Just being there with the people walking down, I felt like I was there myself.”

Butler said he sees big possibilities of what VR can do in the future to address certain topics.

“It gives me a good idea of what else we can do to give people a sense of what it’s like to walk through this world as a person of color,” Butler said.

“I don’t think there’s any part about it that I will forget. I remember almost every single detail of it,” Butler said. “I think the overall impact is something that will stick with me forever.”

@VR intends to keep the "I Am a Man" virtual reality program at the Frederick location for the time being.

For details, go to atvirtualreality.com.