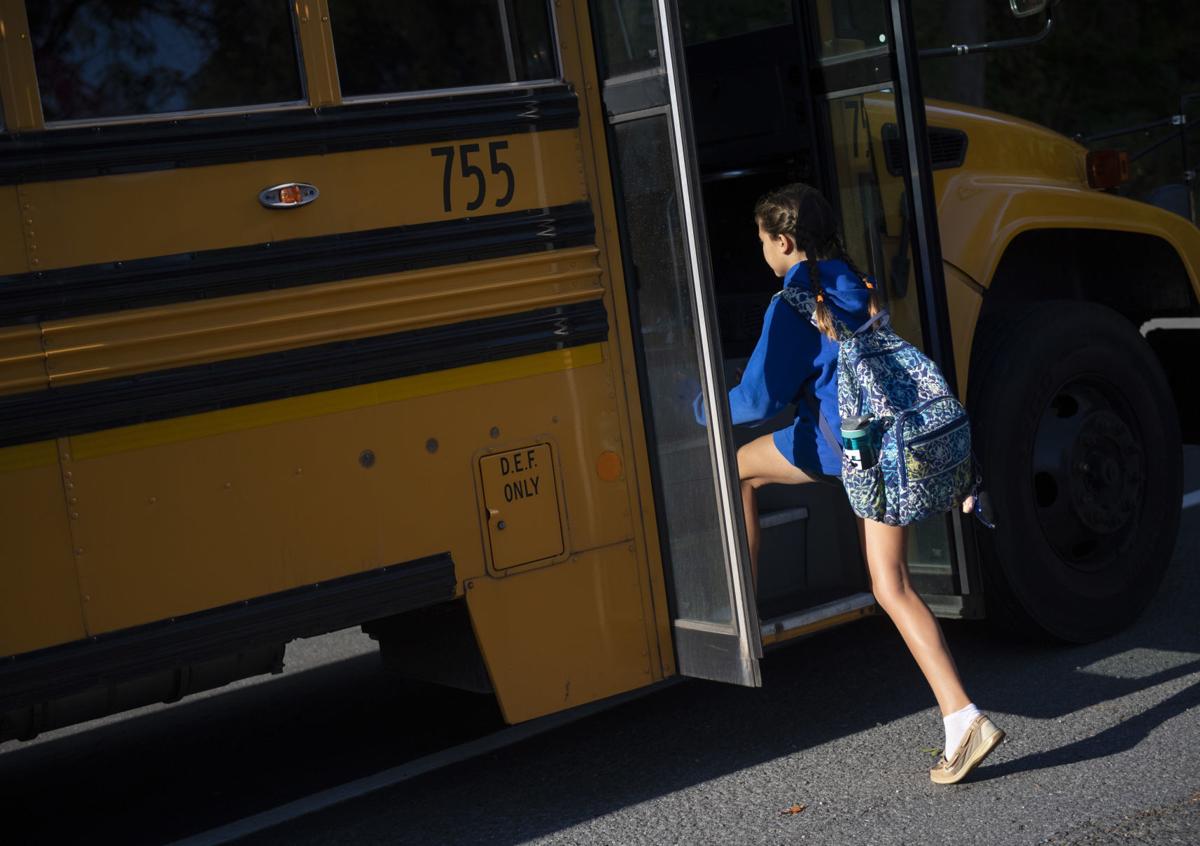 Ten-year-old Faith Scarzello boards her school bus Friday morning. Under a redistricting plan, Scarzello would have been the only student at her school to be shifted to a different middle school next year. 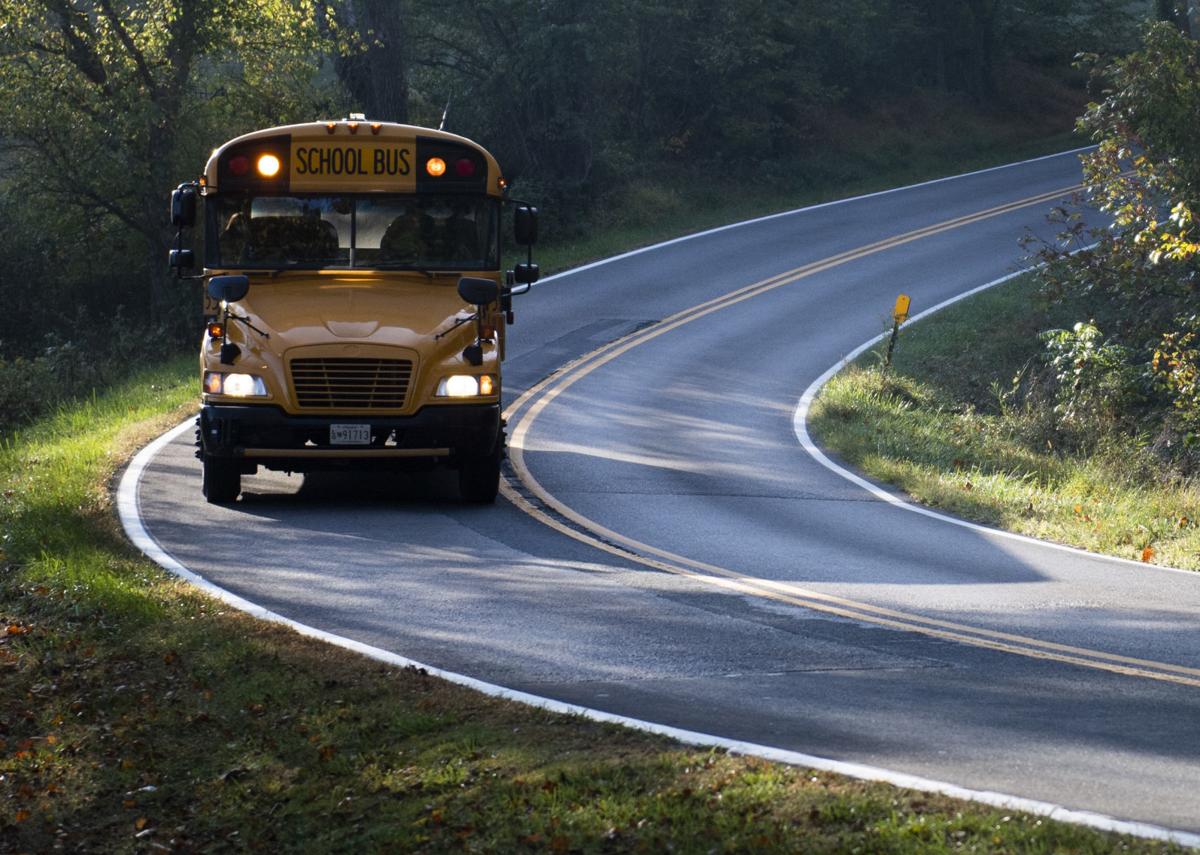 A Frederick County Public Schools bus approaches a stop Friday morning on Gas House Pike. Under a redistricting plan, Faith Scarzello would have been the only student at her school to be shifted to a different middle school next year.

Ten-year-old Faith Scarzello boards her school bus Friday morning. Under a redistricting plan, Scarzello would have been the only student at her school to be shifted to a different middle school next year.

A Frederick County Public Schools bus approaches a stop Friday morning on Gas House Pike. Under a redistricting plan, Faith Scarzello would have been the only student at her school to be shifted to a different middle school next year.

Paul Scarzello and his wife had not been concerned about the Frederick County Public Schools Linganore-Oakdale-Urbana redistricting plan until a few weeks ago when school Superintendent Terry Alban announced her recommendation.

“We just happened to go [online] and say, ‘Oh, I wonder what it ended up being,’ and that’s when we noticed,” Scarzello said.

What the parents of five saw was that under the superintendent’s recommendation, their daughter Faith and son Luke would be the only fourth- and fifth-graders from Deer Crossing Elementary to switch schools.

“Up until that point, the proposals had been to either keep us in our current feeder pattern ... or had them going with a large group of kids and we were fine with it,” Scarzello said. “It wasn’t until what we saw in September, ‘Oh, man, they’re going to be switched by themselves.’”

If Alban’s recommendation is approved by the Board of Education, Faith would be the only student from Deer Crossing going to New Market Middle, and a year later, her brother would face a similar situation.

FCPS Chief Operating Officer Paul Lebo said it’s uncommon for a lone student to be moved as a result of redistricting. The planning block was redistricted due to a subdivision being constructed directly south of Gas House Pike and near the future Blue Heron Elementary, he said.

“To create the attendance boundary for Blue Heron it really makes sense to include that planning block since it is literally across the street from Blue Heron Elementary,” Lebo said.

Once families begin moving into those homes, the number of students in the planning block is expected to rise drastically from its current eight, but that will take some time.

“We have a unique situation here because Blue Heron is not built yet, and there aren’t families in the homes across the street yet,” Lebo said. “It was this one-year period where there aren’t students yet in the neighborhood, so we had a situation where kids could potentially not have a cohort to be with.”

When Scarzello noticed this anomaly, he decided to bring it to the attention of the Board of Education by email and by speaking at one of the public hearings.

Board member Liz Barrett, sensing the impact this could have on the Scarzellos, brought it up in the board’s redistricting discussion at their last meeting on Sept. 25.

“This is the first time I’ve heard of this specific thing,” Barrett said in the meeting. “I know we can’t sit here and carve out tiny exceptions, but ... using our board policies where we’re focused on student well-being ... I’d like to see those situations have the choice” of either remaining in their current cohort or moving to the new school.

After discussion, the board came to a consensus on allowing the superintendent to grant an out-of-district transfer not only to the Scarzellos but all of the students now residing in the planning block.

“If you look at the map [moving the planning block] certainly makes sense long term, but as we recognized and went back and looked at it further as the board requested ... it made sense to create an exception,” Lebo said.

When asked why the unique situation of the students in the planning block had not been identified before this point in the process, Lebo said nothing had been overlooked and that the Scarzellos’ situation highlights the importance of community feedback.

“I wouldn’t say anything was missed necessarily. This is why we want to engage the community and say ‘Hey, what is unique about this massive county and what could be done differently to make this an even better plan?’” Lebo said.

Barrett agreed, saying she has confidence in FCPS staff, but that it’s important to have mechanisms in place to resolve such anomalies.

“I do have every confidence that staff is constantly working to prevent situations like this and that it is our board’s job to kind of play backstop,” she said.

Scarzello said he was thankful the board listened and said he understands sometimes oversights are made.

“It did concern me, but I understand that things happen ... and I really appreciate the fact that they identified it as well, it wasn’t just brushed under,” Scarzello said. “Because my fear was it’s such a small number we don’t have the voice that some of these large subdivisions have.”

The board will vote on granting out-of-district transfers to students in the planning block as part of approving the entire redistricting plan at their next meeting on Oct. 16.

If a student in the planning block decides to take up the transfer offer, they will remain in their current feeder pattern for the remainder of their FCPS years, meaning the Scarzello children would go to Oakdale Middle and Oakdale High School instead of New Market Middle and Linganore High School as the redistricting plan lays out.

They will also be required to provide their own transportation for the rest of their time at FCPS similar to high schoolers who are being “grandfathered in” under the redistricting plan.

Any families who move into the new subdivision in the planning block after the school board votes will be required to adhere to the new attendance boundaries.

Scarzello said the transportation caveat is not ideal but it’s a compromise his family can work with.

“I don’t think that [the board] have an easy job in terms of what they’re trying to do here and satisfy everyone’s voice,” Scarzello said. “In the end people are going to be upset, and I feel fortunate in the fact that they recognized my situation and they addressed it.”

Now's the time for home schooling or get a govt voucher to help pay to send your kid to a private school. Socialist/Marxist style school systems don't work, they don't teach, they merely indoctrinate into glorious marxism. Just ask those, now in the usa of the glorious Soviet Union and its schools. May be part of the reason why socialism is a failure and indeed failed in the USSR.

Nothing surprising here. Just look at the redistricting mess in Howard County. Where did Dr. Alban work at before FCPS?