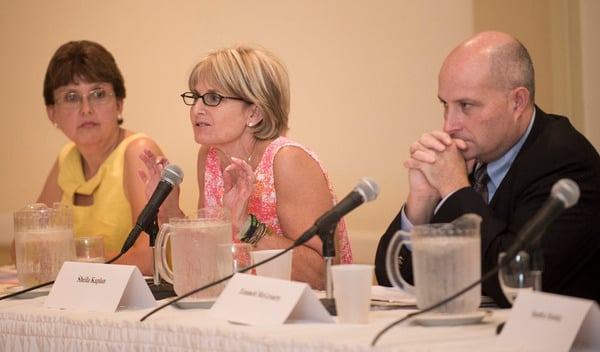 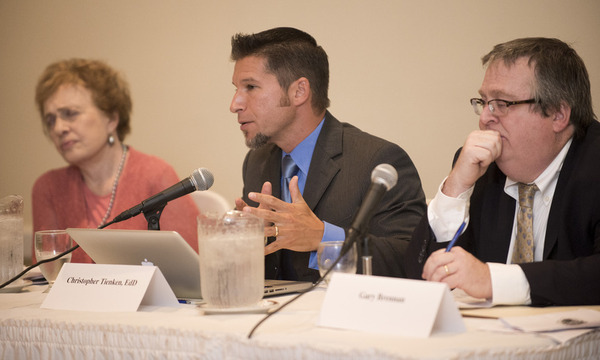 Local opponents of Common Core hosted a town hall on Tuesday to raise awareness of what many called dangerous and poorly designed state curriculum standards.

Most argued that Common Core does not adequately prepare students for higher education and careers. States hastily adopted the standards as a way to get federal funding with little thought about schools’ ability to implement them, the speakers said.

About 100 people attended the event sponsored by the Republican Club of Frederick County and the grass-roots Education Freedom Committee.

The speakers voiced concerns ranging from student privacy to local control over curriculum. Common Core was created by politicians rather than educators, and pushed into schools without a pilot program or data to show its success, Tienken said.

“Children don’t have a seat at the policymaking table,” Tienken said. “We should only implement policies that have been tested and proven effective.”

The English and math standards do not require subjects difficult enough to prepare students for college and “will not get anyone ready to read a college textbook,” Stotsky said. She added that Common Core does not include standards for pre-calculus or trigonometry.

“It doesn’t make sense from my experience,” Seaton said. “I’m not seeing obstacles for kids to get to calculus. ... There’s parts of trigonometry wrapped into Algebra II, parts wrapped into pre-calculus.”

Alban spoke in favor of Common Core’s impact on county schools. Students are “learning perseverance. They’re learning to work as a team. Learning that sometimes the quietest person in the group has the best idea so you’d better talk to that person,” she said.

Frederick County made the local choice to implement Common Core before it was required this school year. The district wanted to roll it out in phases to make it an easier transition for students and teachers, Alban said.

“We have all along maintained the ability to design the curriculum the way we wanted,” Alban said. “It’s taken a lot of time, a lot of energy, but it’s all been worth it.”

Flemming Paschal, of Frederick, called the standards an experiment controlled by Washington.

“Our kids are guinea pigs,” Paschal said. “In some regards, (Common Core) seems too broad, but in math, they’re narrowing it down. ... Bureaucrats shouldn’t be dictating what our kids are learning.”

Organizers and panelists urged those attending to speak up and create change.

“The way to address the problems we have with the Common Core ... it’s at the Maryland State Department of Education,” Brennan said. “I think we need to convince them to slow down, look at this carefully, what’s good about it, what isn’t good about it, and support our teachers.”

Good coverage, but did any resolution evolve from the discussion? Or was that the purpose of the meeting? Did you feel the community was well represented or were they mostly teachers in attendance? Was there a lively discussion? I wish I could have been there.

I don't I understand how my son gets a letter in 6th grade telling us his math path... only to very shortly thereafter be told he is re taking algebra to get onto core. how could they not have known this in 2010? it sets these honors students back a year as freshman..

Here's Richard Rothschild, Blaine's pal, man of "Unwavering Conservative Leadership" , county commissioner from Carroll County, and confirmed T partier of the John Birch Society type: ""I think we should file suit to try to stop Common Core so that we retain autonomy in our county to teach the way our experts think is best, not the way the federal government thinks," Rothschild said. "Just because something is law doesn't mean it can't be challenged ... the defacto federalization of education is not tolerable to me, I know where this is going." Yes, its a conservative thing, Darth.

Funny, nowhere in Federal Law is there anything about Common Core. Heck Congress can't even agree that the sky is blue (shh that is in the Science part of Common Core explaining about that new fangled gases and light refraction thing).

The Conservatives have been complaining about raising standards, for which Maryland has pretty high standards, but lo and behold when a common set of standards are agreed upon with the input of education professionals (which Cindy Rose who was behind this charade is not) they are complaining about it. Why? because it will definitively show that in deeply red states their education standards are so low it will prove that they are the reason the U.S. is not on top in education. Funny how they forget that for the most part foreign students come here for an education but far be it for them to deal with facts. In their circles if you tell lies enough it must be the truth. Then they wonder why their children are so stupid,

Yes, and unfortunately, what the 10:01am and 10:39am comments left out was when the Obama administration got ahold of it, it was altered to have islamic overtones in the history section of the curriculum. Nice way to islam everyone on a national level by waving federal funding at the states and threatening to withhold that funding if the state doesnt accept the curriculum. LOL Naturally, liberal Maryland, which Gov. O'Malley rubber stamps approval for anything Obama wants, dived right into it. [beam]

Everybody read the 10:01am and 10:39am comments again, especially you Conservatives.

What does conservative have to do with anything?

They developed, promulgated and implemented common core curriculum as a way to measure teacher performance via standardized tests.

They were for it before they were against it.

Read the comments more carefully darth. Conservatives will hate it because Obama likes it, even though it was a Conservative initiative.

Plenty of educated Americans as we know.God given liberties, whats that mean??Created equal,not true too.

"The Education Freedom Committee is not a faceless D.C. based lobbying group. We are an organized network of grassroots activists who are committed to defending our God-given liberties."

"Simply put, politics is not about the common good, appealing to men’s better angels, nor serving our Lord. These may be your motivations. I pray they are mine. Occasionally, they will be a politician’s motivation.

"Politics is the adjudication of power. It is the process by which people everywhere determine who rules whom."

"Power is the ability to tell a politician what you want, and either get it or deliver substantial pain (maybe even get a new politician) at the next election. This is the ONLY way ideological, controversial legislation can be passed or defeated."

"You and your grassroots group may be able to single-handedly bring the politician down."

Here is their petition to stop Common Core. I especially like the reference to jackbooted government thugs employed by the Dept. of Education:

"We, the undersigned, oppose the Federal "Common Core" Standards.

We, the undersigned, oppose any and all top-down, one-size-fits-all approaches to educating our children.

We, the undersigned, oppose the Department of Education's attempt to control, through force, every aspect of learning in America.

Therefore, be it resolved that we, the undersigned, demand that all of our elected officials in my State and in Congress act immediately to eliminate and defund the "Common Core" program."

Here's a sample letter to the editor that you can copy on the Education Freedom Committee website:

"Should Barack Obama and federal bureaucrats determine what your child is taught? They think so! Enter the national Common Core Standards. This system is an effort by special interests and the federal government to eliminate local control over standards and testing via the creation of a national curriculum. Embedded in the 2009 Stimulus Bill, as a program called “Race to the Top,” states were monetarily bribed to pass so called Common Core Standards, and most did. The Common Core takes away local authority to determine what your children learn and who teaches them. All fifty states must refuse membership in the two testing consortia: Partnership for Assessment of College and Career Readiness (PARCC) and Smarter Balanced Assessment Consortium (SBAC) which are central to the Common Core Standards. Common Core will cost millions of dollars in each state to implement — one state estimates a cost up to $300 million! We know big government politicians will use this to justify massive tax increases! Common Core Standards add fuel to the fire by dictating that every school system follow a one-size-fits-all approach to education. The Common Core Standards subject all students to standards, which are laced with unproven methods and techniques. There is no constitutional basis for national standards, assessments, or curricula. If Common Core is adopted, we will cede all authority over education to the federal government. Contact your State Senator and State Representative immediately and insist they defend state sovereignty from federal interference by refusing to participate in Common Core!"

"The Education Freedom Committee was founded in 2013 as a national grassroots organization dedicated to protecting true educational freedom and opportunity for all Americans.

"The ultimate goal of the Education Freedom Committee is to secure complete educational freedom for all citizens by abolishing the federal Department of Education and by passing Freedom to Learn laws in all 50 states."

Common Core was developed when the National Governors Association hired David Coleman and Student Achievement to develop some standards. The standards were to "provide a consistent, clear understanding of what students are expected to learn, so teachers and parents know what they need to do to help them." These standards have been adopted at the state level by the National Governors Association and the Council of Chief State School Officers. Sure, the feds (and Obama) have said "This is a good idea". That might be the issue.

Developed by conservatives, championed by Republican governors and the Bush Education department, final stages implemented under Obama therefore we conservatives are against it? Like Syria: they were for it until they were against it. Should have been a town hall meeting on cognitive dissonance.