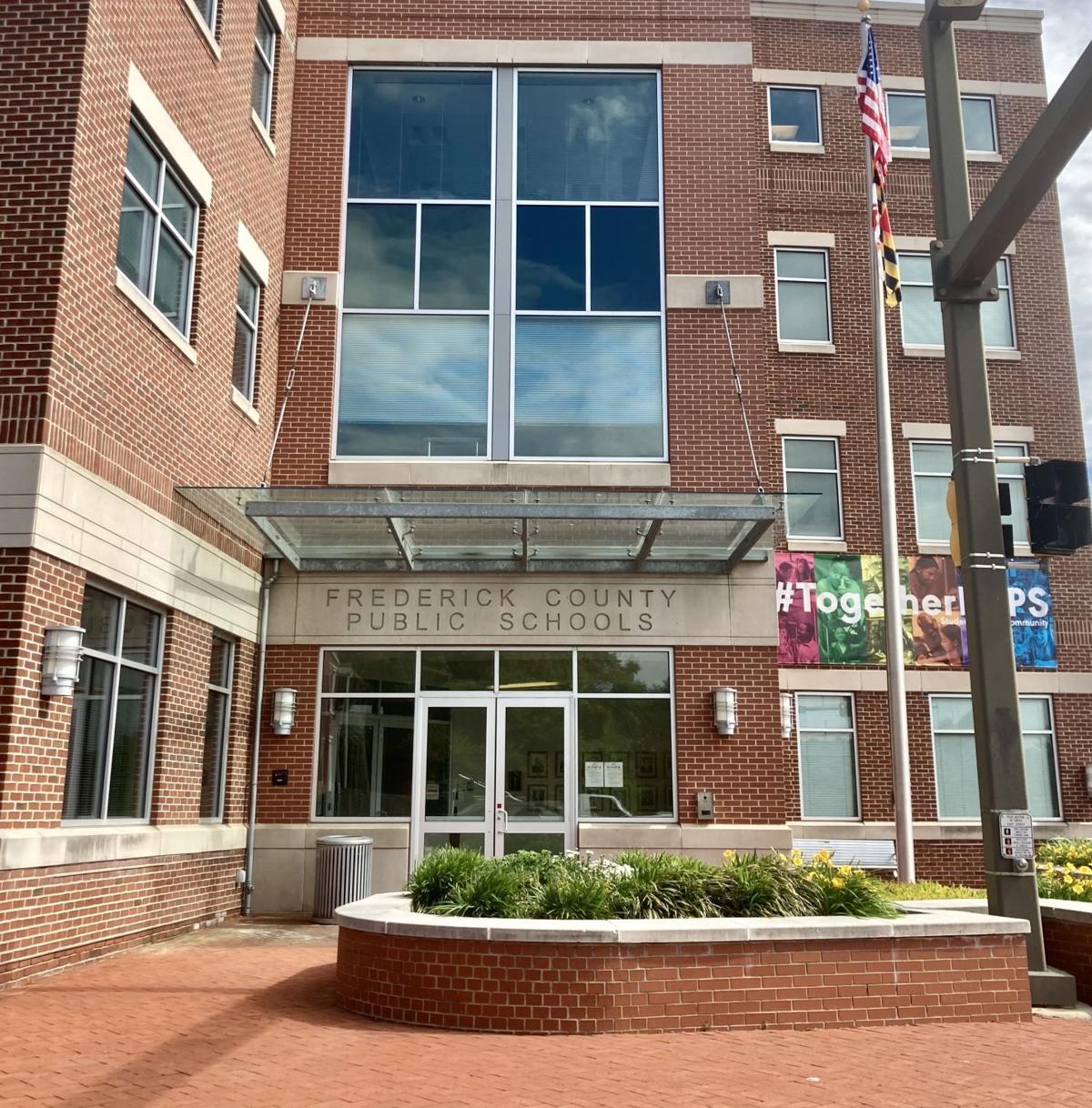 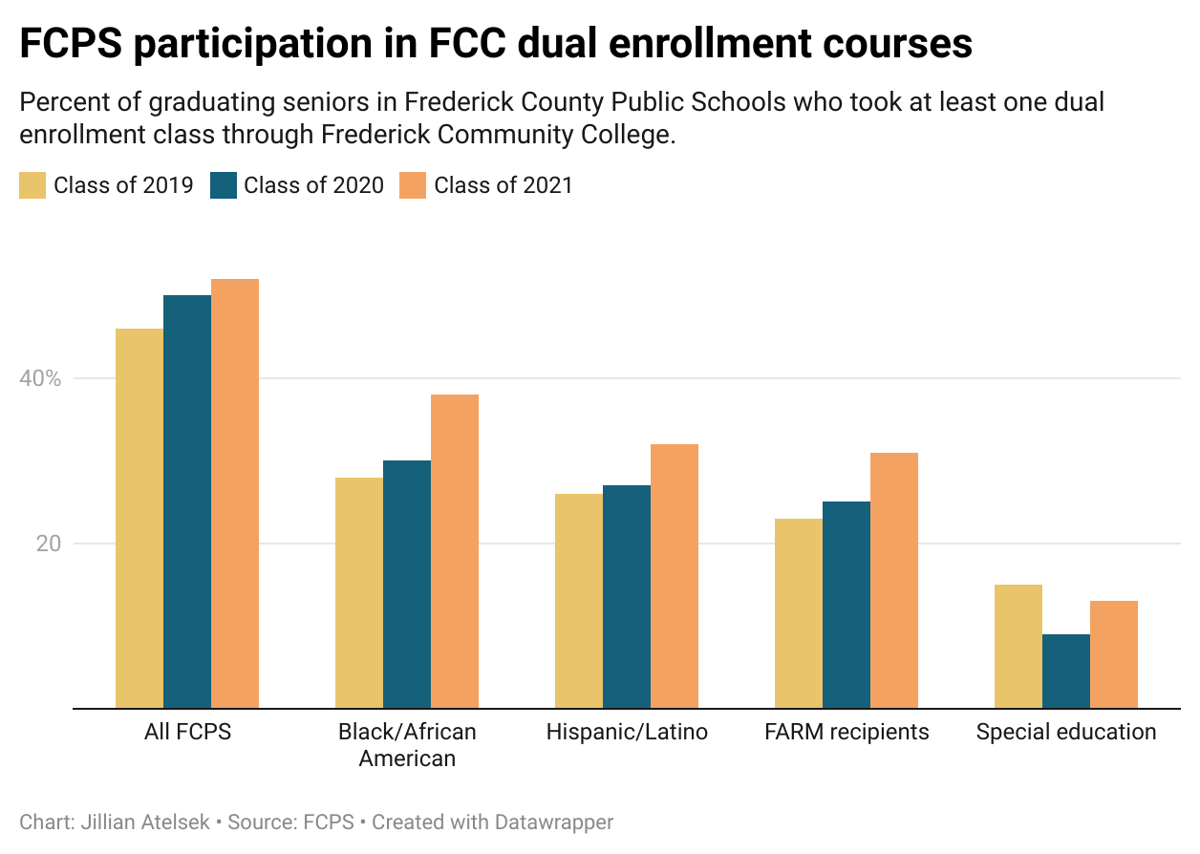 FCPS began allowing students to enroll in FCC classes taught on their high school campuses in 2013. The program has grown steadily in the years since — something district leaders laud as an important and cost-saving step in preparing students for college.

But participation among Black, Hispanic and Latino students — as well as those who qualify for free and reduced price meals or have special educational needs — lags sharply behind.

“I’d really like to see us much more even across the board,” FCPS Dual Enrollment Coordinator Diana Sung told the News-Post at Wednesday night’s annual meeting between the county school board and FCC’s Board of Trustees. “We’ve really set some very clear targets.”

More than 50 percent of FCPS’ most recent graduating class took at least one dual enrollment course during their time in the system. But among Black and Hispanic students, participation was much lower, at 38 and 32 percent, respectively. Just 31 percent of FARMs recipients took a course.

Enrollment among special education students was by far the lowest: 13 percent of them took a dual enrollment course before graduation.

Numbers for each group have increased over the years, mirroring the steady rise in FCPS’ total dual enrollment participation. But since 2018, the gap between the system’s overall participation and that of Black, Latino and FARMs students has remained between 10 and 20 percentage points in each category. The special education gap is consistently larger.

This fall, 1,288 students are taking high-school based dual enrollment classes, which are taught by FCPS teachers. An additional 345 are participating in the “open campus” program, where students take classes taught by FCC professors online or in-person.

The courses allow students to earn college credits while they’re still in high school at a fraction of what they’d normally cost. Plus, educators praise the classes for their rigor and ability to prepare students academically and emotionally for college.

Leaders from both FCPS and FCC stressed the importance of equity and accessibility in dual enrollment course offerings at Wednesday night’s meeting.

“We want to remove as many barriers as possible,” said Elizabeth Duffy, FCC’s dual enrollment director. “And the biggest barrier is lack of information.”

Duffy and Sung are expanding their team’s outreach to middle schools. They’re also partnering with community groups like the NAACP, Centro Hispano de Frederick and the local housing authority to spread the word about the program and make sure families understand it’s possible for them.

This year, for the first time, the system is offering a dual enrollment class specifically for English-language learners. The ESOL 100 course is available at Gov. Thomas Johnson and Tuscarora high schools this semester, and next semester it will arrive at Frederick High School.

Nineteen students are currently enrolled in the class, and 11 are signed up for the spring. The course offers three FCC credits in both the general education and developmental categories, and it fulfills two separate English and foreign language graduation requirements for FCPS.

TJ, Tuscarora and Frederick were chosen to pilot the program because they have the highest concentration of English-learner students. Systemwide, English-learner enrollment across FCPS has grown rapidly over the past 20 years, from 200 in the year 2000 to nearly 3,700 today.

The county has a particularly high concentration of students from El Salvador, Guatemala, and Honduras, said Larry Steinly, an EL specialist with FCPS.

Those students were extremely unlikely to enroll in dual enrollment classes before ESOL 100 was introduced, Sung said. Only a handful of English-learner students did so each year.

Katherine Gull, another EL specialist in FCPS, said she hoped the new course would help her students feel more comfortable with the idea of higher education. Her team also plans to expand dual enrollment course offerings tailored to English-learner students, she said.

“Many of our EL students do not see themselves as college students,” said Katherine Gull, another specialist with FCPS. “It’s a nebulous concept.”

“We have 109 sections of dual enrollment going on this fall. That’s a small college in itself,” Duffy said.

'those who qualify for free and reduced price meals or have special educational needs — lags sharply behind' We should all know that by now. Those people who choose to have children without thinking through how they (not the public) can afford to properly raise their children (and that includes having the resources (i.e., money, time, temperament, etc.) to enable success for their children) are being selfish and serving their own needs/desires (and possibly using religion as a reason for continuing on with an unwanted pregnancy) and are knowingly putting their children at a disadvantage. With the human overpopulation we have, while I am not suggesting we regulate the number of children people can have (yet), we should eliminate the public policy and tax incentives currently available for people having children. Additionally the fewer children people have here, the more people we can allow to immigrate into the country without significantly worsening our impact on climate change and other environmental issues.

If people believe in human induced climate change, they need to start pressuring their politicians to take simple easy steps that cost the tax payers nothing (may even allow the additional revenue to be directed towards education and environmental issues).

MD, do you have some specific ideas on how to deal with overpopulation in the World?? If you don’t, quit talking about it. China tried it and all they got is a dearth of people to enter the workforce to replace those retiring and a lot of old people to take care of. So what would you do if you were named the overpopulation czar? In the U.S. women who face an unwanted pregnancy because their husband or boyfriend came home drunk and demanded sex or a teenage girl in love who’s boyfriend tells her if she won’t have sex with him he”ll find somebody who will, are being forced to have an unwanted child who becomes a burden on society along with their Mother. And in 3rd World Countries women keep having children because they don’t have the knowledge or the means not to. So overpopulation czar, how do you fix that? I await your reply.

The answer to your question is that I've answered your question several times before. I don't know if you have a problem with reading, comprehension or your just don't want to understand positions that do not meet with your opinions. I don't await your enlightenment because you've shown that by now it will never happen. I wonder how many children you have that you get so touchy about my posts. Could it be you're part of the problem?