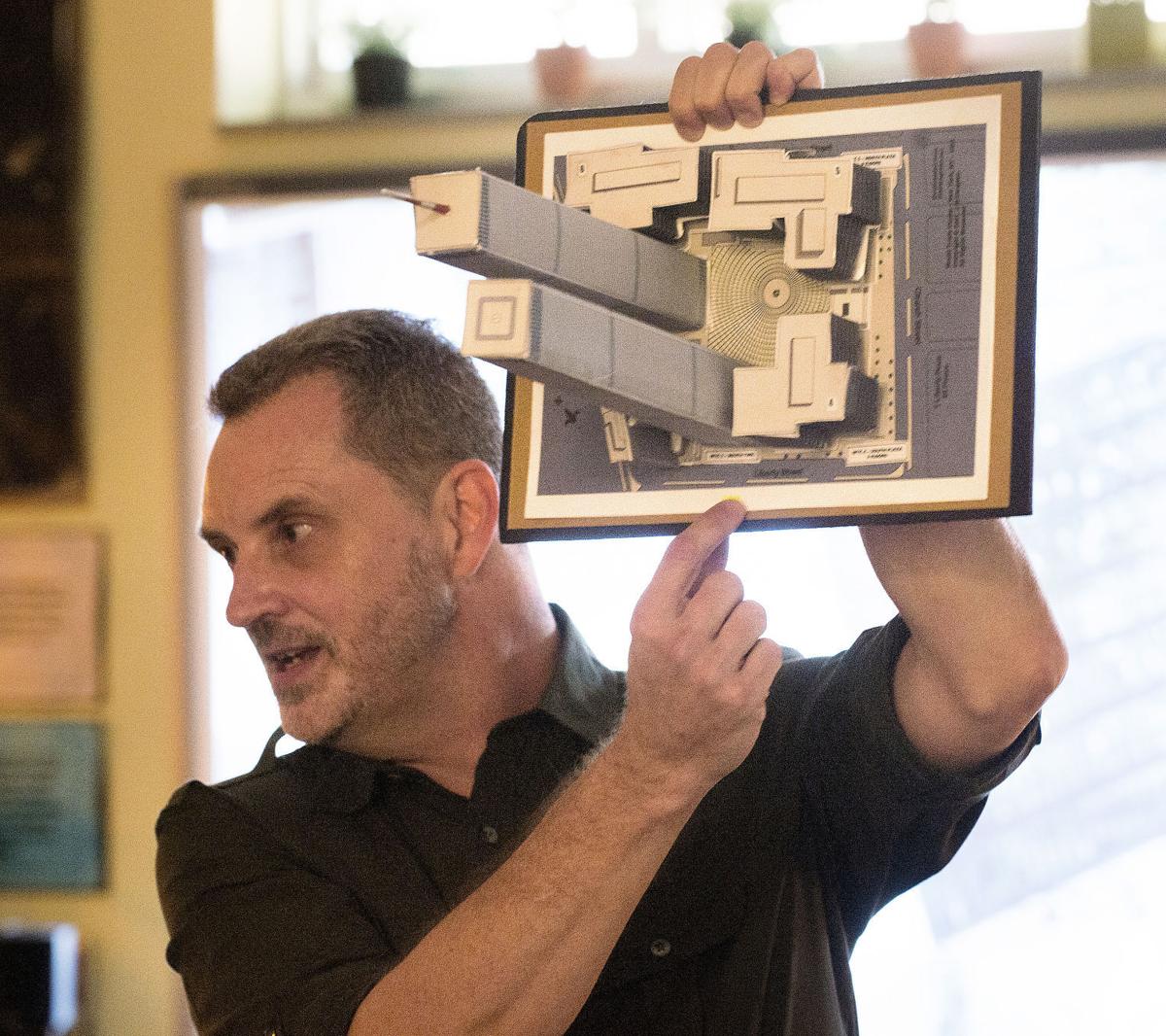 Darren Hornbeck holds up a model of the Twin Towers in New York City during his class on 9/11 at Linganore High School in a previous school year. 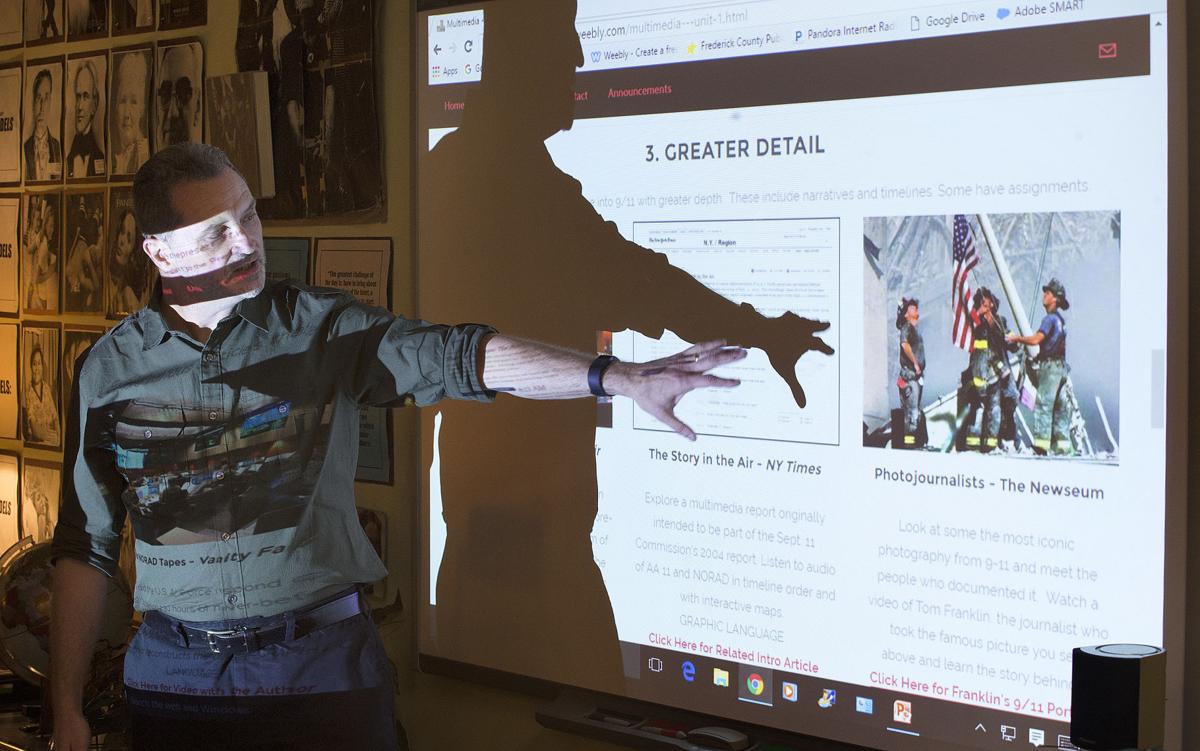 Darren Hornbeck teaches a class on 9/11 at Linganore High School. 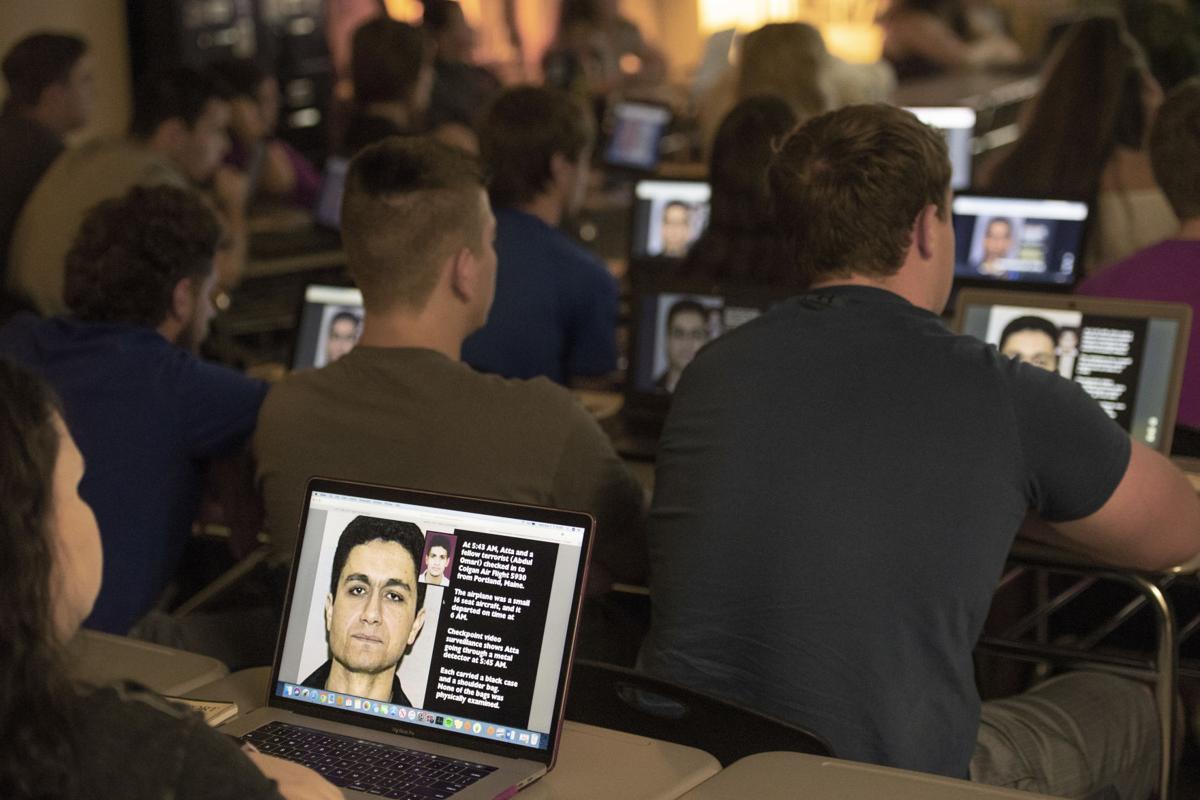 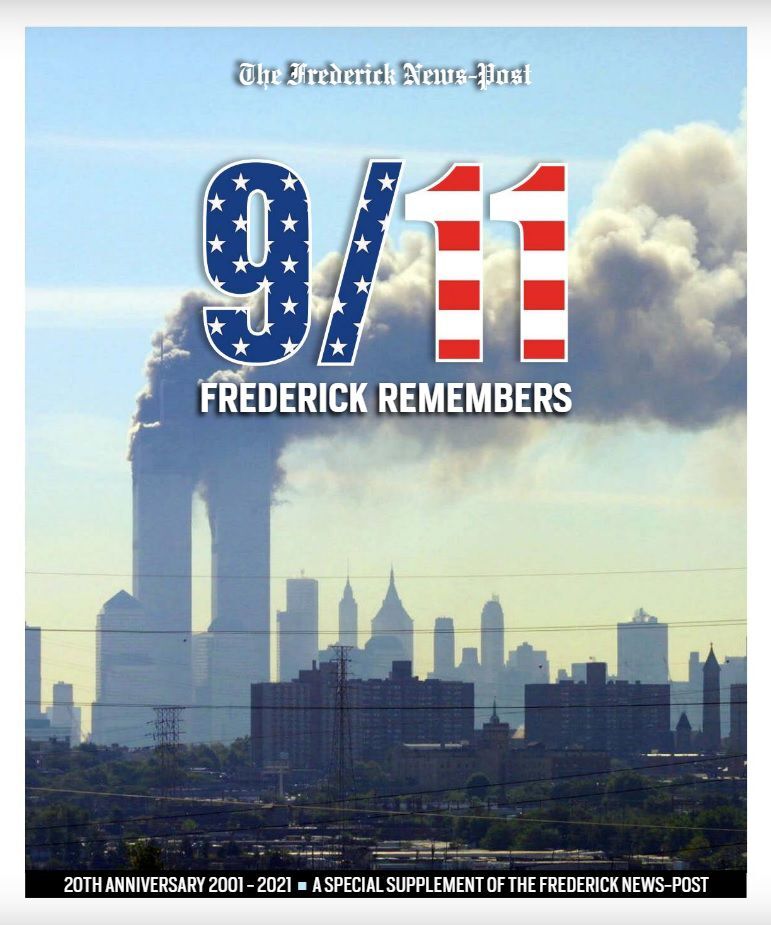 Darren Hornbeck holds up a model of the Twin Towers in New York City during his class on 9/11 at Linganore High School in a previous school year.

Darren Hornbeck teaches a class on 9/11 at Linganore High School.

Whenever Aldo Manino talks to his Frederick High School students about Sept. 11, 2001, he describes the same three memories.

First is the weather. As a first-year teacher in Brooklyn, New York, Manino was struck by it. Not too hot or too cold, brilliantly sunny — “It was the most beautiful September day I’ve ever had,” he said.

Next is the sirens.

And last is the silence — the “eerie” quiet that settled over the city that evening, its residents grieving, shocked, huddling in their homes.

Twenty years later, Manino still jumps when he hears the rumble of a low-flying jet.

Ahead of the 20th anniversary of 9/11, Manino and other Frederick County Public Schools social studies teachers shared some of the ways they approach the subject in classrooms — doing what they can to make an impression on students who weren’t alive when the towers fell.

“If we don’t have kids talking about it, the younger the kids are and the further we get away, people do forget,” said Leslie Williamson, who teaches at New Market Middle School.

Personal stories — even about seemingly small things like the weather, in Manino’s case — work their way into many teachers’ classrooms. It helps cement the reality in students’ minds, they said.

Williamson, for one, was a student teacher at Ballenger Creek Elementary School back in the fall of 2001. She remembers teachers popping their heads out of their respective classrooms, whispering to each other. She remembers the long line of cars as parents rushed to pick up their bewildered children.

She took a half day that day. When she got home, an exterminator was waiting for her. But instead of spraying for bugs as they’d arranged, Williamson said, the pair of them just stood, transfixed, in front of her TV.

Now, Williamson encourages her students to gather stories like that from anyone they can: parents, grandparents, aunts or uncles.

Each year, either on Sept. 11 or a few days before, she instructs her 12-year-olds to talk to someone at home about their memories from that day. Then, they share what they learned with the class. The kids are constantly skeptical that they know anyone who was really affected by the event, she said — but every year, they’re proven wrong.

“By having them make those connections,” Williamson said, “it makes history more real.”

Teachers across the county have a good deal of freedom in how — and if — they choose to approach 9/11, said Colleen Bernard, FCPS’ secondary social studies curriculum specialist.

“We give them the autonomy to address the topic within the context of their curriculum,” Bernard said.

But no matter what that context is, she said she encourages instructors to drive home the connection between the attacks and the world the students grew up in — focusing on the ways 9/11 changed security, foreign policy, surveillance and more.

“It’s important that we understand where it is that we came from in order to understand where we are,” she said. “And that, to me, would be the crux of any time you’re teaching about history.”

For five years, Darren Hornbeck has taught an entire course on 9/11 at Linganore High School. He said about 600 students have taken it since it was established the year of the 15th anniversary.

The course is only open to juniors and seniors, since the content is often graphic. This year, he’s reworked the syllabus to frame everything around the U.S. withdrawal from Afghanistan, he said.

“We started to use that a little bit as a springboard to go back in time and look at the events that began this 20-year war,” he said. “It’s a little bit more of a connection to what the students are seeing in the news.”

Hornbeck wants to give students the vocabulary to understand and discuss what’s happening around them, he said — and to connect with the older people in their lives who experienced the trauma of 9/11 and the ensuing war first-hand.

Since school began on Aug. 18, he’s worked on building a knowledge base for his students on the origin and motivations of groups like Al-Qaeda, the Taliban and ISIS. Next, he’ll make sure they understand, in detail, what happened that day — and how the country changed in the months and years after.

“After you get that down, you can begin to make, I think, some judgments about the policies that are created,” Hornbeck said. “Because you kind of have to have a basic framework of understanding of who the characters are, why people are behaving the way they are, before you go on to begin to think at that level.”

Each teacher takes a slightly different approach, aiming to leave their students with varied takeaways. Manino, who witnessed rampant Islamophobia in New York after the attacks, makes sure to spend time dismantling misconceptions about Muslim people. He tells his class about the tenets of Islam that govern conduct in war, under which the 9/11 attacks would have been prohibited.

Williamson said she gives specific attention to patriotism, trying to instill in her students a pride for their country and the freedoms they’re afforded.

But most of all, Hornbeck said, it’s about making children aware.

“Those of us that were probably in our 20s or older, we carry a strong emotional connection to it. When they look at it, because they weren’t watching TV when the planes hit and the towers fell, they don’t bring that,” Hornbeck said. “[I] help the students understand why this was such a seminal event in American history.”

This story appeared in The News-Post's 20th anniversary of 9/11 special section. Click here to read an e-edition.

I wonder if the U.S. has really learned the lessons from 9/11 and before. The U.S. really needs to review it's foreign policy especially in the mid-East. Why are some of the countries in the world targets for mid-Eastern terrorists and there are some countries who are not?

And let's not forget George Bush hid in a hole in the ground.

Dick, please show a little class. Whatever you think of Bush, he was the President, and followed Secret Service protocol.

Changing gears, did you know Lincoln is the only President to actually face hostile fire, at Fort Stevens I believe.

“Hostile fire”? Many President’s have come under hostile fire. I think you meant “shot at under military assault”.

Yes, Aw, "hostile" fire. Do you have a clue as to what the word means?

1a : of or relating to an enemy hostile fire"

"Hostile" fire as opposed to "friendly" fire. And I don't believe any of Early's men were exactly Lincoln's friends. Do you?

Agreed Blueline. I suggest Dick watch 9/11: Inside Airforce One on The History Chanel, or read a factual account of that day. Andy Card and Jenna Bush Hager were on the 9/11 NBC memorial show this morning. President Bush overruled the Secret Service and told them to get him back to Washington.

And let's not forget George Bush hid in a hole in the ground.

Just the kind of clueless, lying comment we've come to expect from the liberal left these days. And add "tasteless" for the particular day that it was posted, too.

To me, one on the most disturbing aspects of the attack is victims in the Trade Center towers, having to decide between either a death by fire or death after falling hundreds of feet to concrete below, making the decision to jump. If I were teaching this subject, one of the requirements I would have of my students would be for them to view the "Falling Man" picture, and to watch the videos of those innocent martyrs dropping through the air, so that they can see but just some of the true evil that radical Islamic terrorists are capable of. NEVER FORGET!!!

To me, a disturbing aspect is that the U.S. had multiple warnings about an attack and information about suspicious activity regarding odd flight lessons for airliners, etc. PDB with warnings and then no action. Multiple agencies tried getting anyone to listen to the intelligence reports about an imminent attack without success. Bin Laden knew the US was easily panicked and 20 years later we have spent lives and money on " the war on terror" with the same success as "the war on drugs." I hope that gets taught as well.