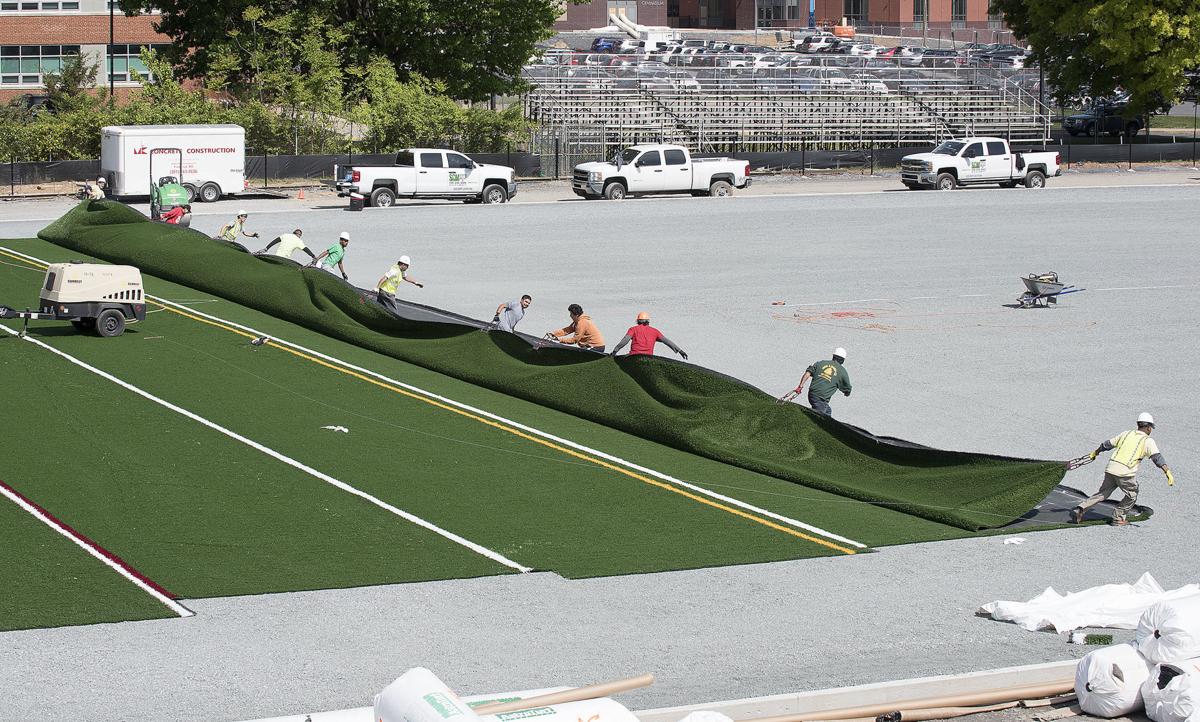 A section of the synthetic turf field at Frederick High School is stretched out in 2017. The Frederick County Board of Education approved $1.3 million to replace turf fields at county schools. 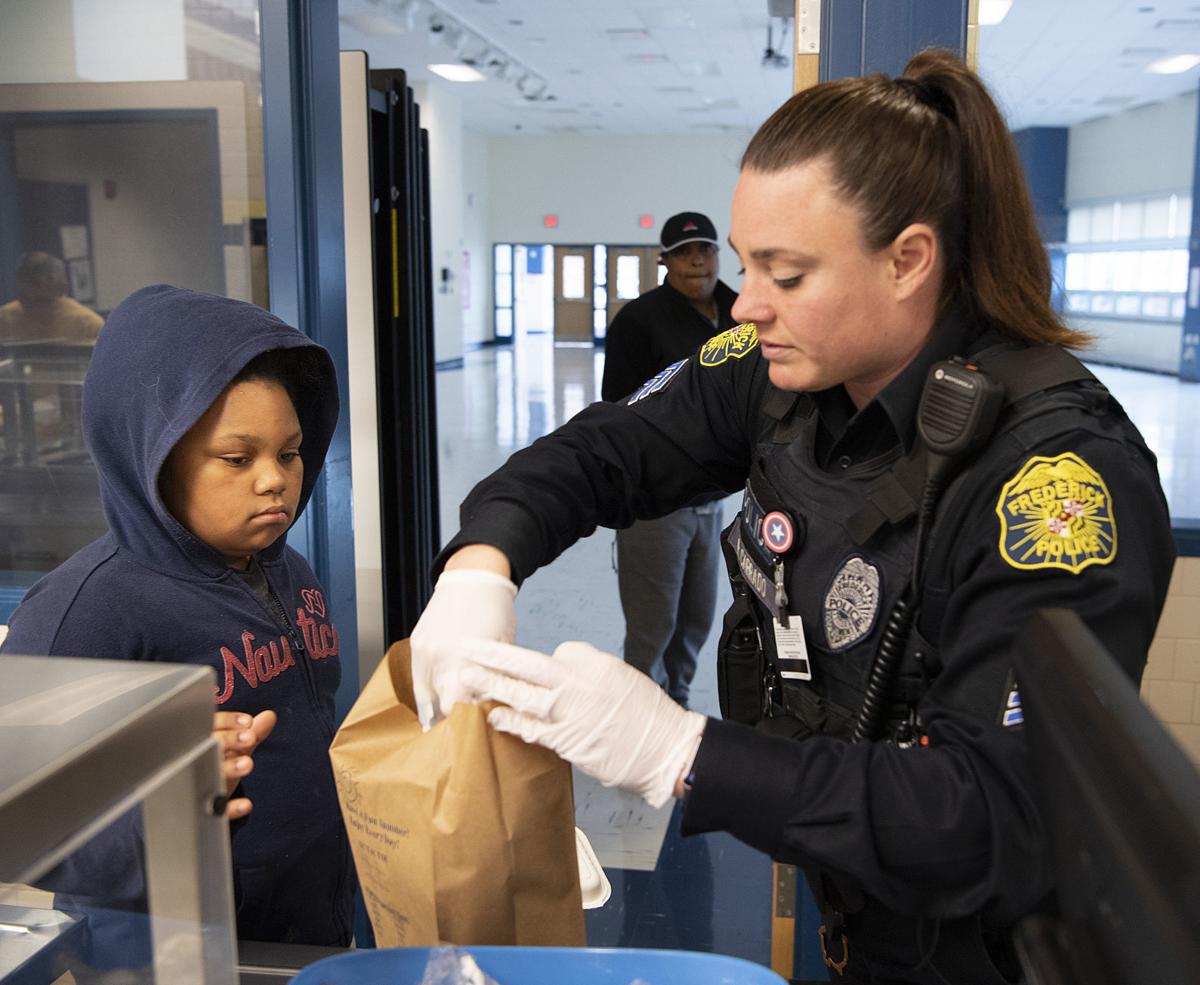 {span}Sgt. Rebecca Carrado of the Frederick Police Department helps student Aziyah Wade, 9, gather a lunch and dinner to go at Lincoln Elementary School Tuesday morning. The officer is one a a number that are helping at the school system’s food distribution program while schools are closed.{/span} 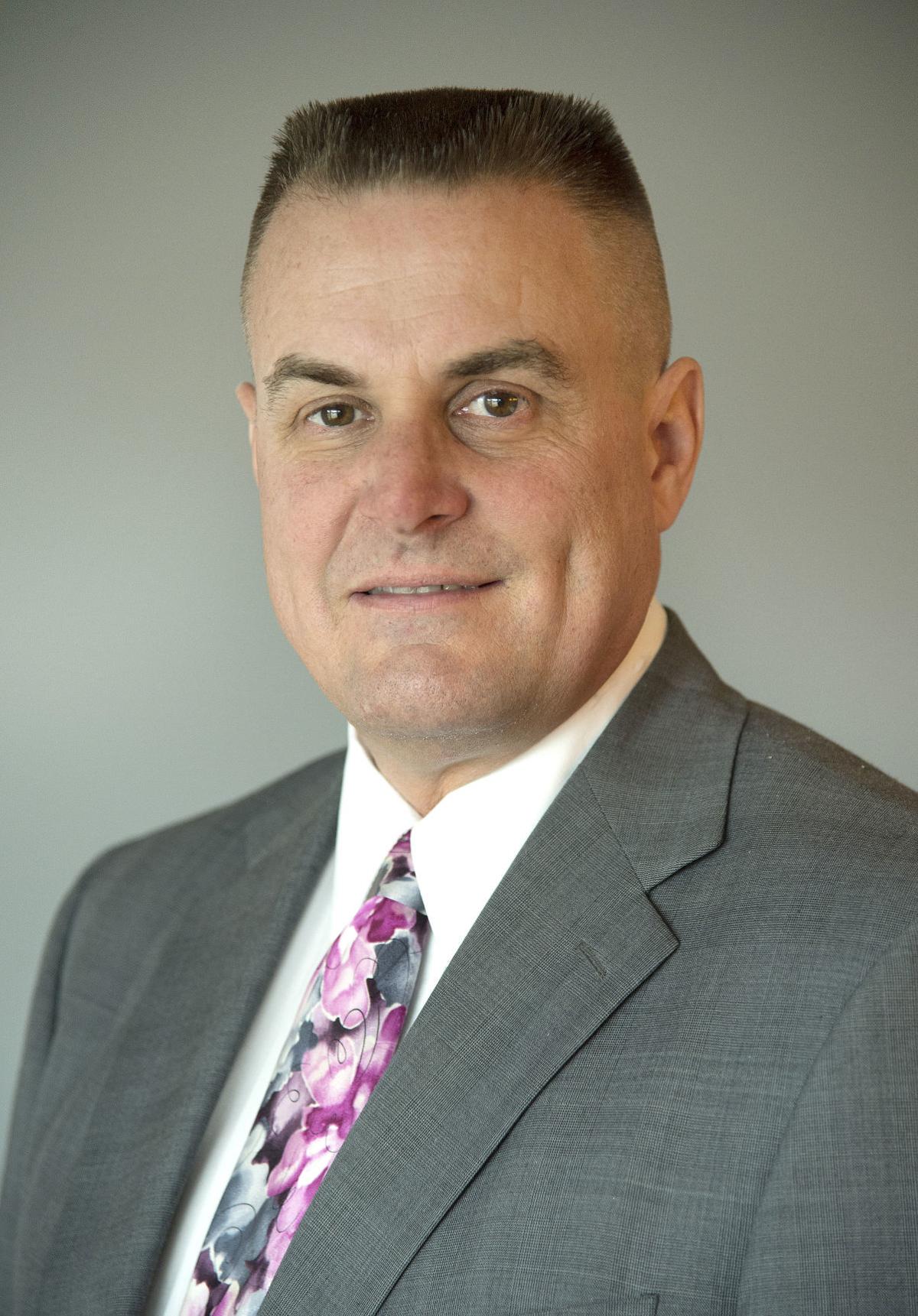 The Frederick County Board of Education unanimously approved a fund to replace turf athletic fields at schools that have them, despite some differing views held by Board members.

This is the first year the Artificial Turf Fund budget has been presented to the Board for approval, as three of the county's five turf fields need to be replaced. The fund was created for the sole purpose of collecting money to be used for the maintenance of the fields.

Middletown High's game field and Oakdale's game and practice field are in need of replacement. It is expected to cost $1.3 million.

Before voting, the Board had a discussion on the equity of the fund. The equity discussion of turf fields has been ongoing since members of the Gov. Thomas Johnson High School Athletic Boosters approached the board in 2017 with a $200,000 request to fund a new turf field. The boosters raised $500,000 for the field themselves, but could not secure the $200,000 from the board in time before a $50,000 grant ran out. The boosters spent six years to raise the money.

Board President Brad Young said he feels the Board needs to figure out a way to set aside money to pay for artificial turf fields at the remaining high schools.

"I know personally that [Walkersville High School] and [Gov. Thomas Johnson High School] have both tried unsuccessfully to raise the funds to get turf fields," Young said. "We need to find some way...so that they aren’t left behind because it is an equity issue.”

But, with the exception of Frederick High School, which also had a turf field installed when the new school was built, all schools with turf fields have 10 percent or fewer of their students qualifying for free and reduced meals — a key indicator of poverty.

The other five schools without turf fields, have 20 percent or more of their students qualifying for free and reduced meals.

"I really think that we should have the other five schools have turf before we start replacing something that we didn’t actually put in," Mason said. "Fundraisers are great and I'm glad they were able to do that but that is not equitable around our system."

Although she voted for final approval, Board member Liz Barrett said she was concerned about the safety of artificial turf fields and how many serious injuries occur on them.

“Turf fields are more durable and they stand up to having multiple teams doing many things on them but there are a lot of different ways to measure equity and...I think that we have to talk about safety not just about everyone having the same thing," Barrett said.

"I can’t get all 'band-wagony' with this one just because I don’t know that the jury is out on the safety," Yoho said before voting to approve the budget.

Due to a shortfall in revenue this year — which is usually collected from field-use rental fees for community groups, cell tower leases, and interest earnings — the budget has a deficit of $166,882.

Clabaugh told the Board that although this is not typical, they have been approved to move forward.

"We verified with our auditors that as long as we could resolve the deficit in the next fiscal year...that this is acceptable by all of their standards," she said.

According to Clabaugh, there is a transfer scheduled from the FCPS operating budget to the Artificial Turf Budget next fiscal year which will address the deficit.

A deficit to make up

In addition to the Artificial Turf Fund, the Board also unanimously approved the Food and Nutrition Services budget for Fiscal Year 2020 despite an expected shortfall in revenue.

The total operating budget for Food and Nutrition Services is $12.7 million, according to FCPS budget documents.

Due to the COVID-19 pandemic and the school system providing free meals to children across the county for three months, FCPS is projecting a deficit of approximately $2.8 million.

During Wednesday's meeting Heather Clabaugh, Budget Officer for FCPS, told the Board that the budget being presented is a "worst-case scenario."

"At this point based upon not knowing if we will be returning to school in a traditional manner in August...we are assuming in this budget that we will be seeing half the students on any given day in the school and so that will reduce our revenues for our school meals," Clabaugh said.

Since it is still unclear what phase of reopening the state will be in at the start of the school year and how circumstances surrounding the pandemic will play out in the Fall, FCPS is budgeting that they will only see 50 percent of students purchasing school meals through January 2021.

Meal prices will remain the same.

FCPS, like many other organizations, is not allowed to run any budgetary deficits therefore money will be transferred from the Other Post-Employment Benefits (OPEB) portion of the FCPS Self-Insurance Fund (SI) in order to make up for the shortfall. OPEB provides benefits, particularly health insurance, to retired employees. Retirees are not expected to see any impact on their retirement benefits or premiums.

Clabaugh said if the first half of the school year turns out better than expected, the funds that were transferred will be returned to OPEB.

Staff is also looking for additional sources of revenue to make up both for the deficit and for the additional, irrecoverable loss of $1.3 million they are projecting.

"We are currently contacting our state and local officials regarding this proposed deficit and seeking other funding sources because we know that all the food and nutrition funds throughout the state of Maryland and probably the United States will be in the same unfortunate economic predicament," Clabaugh said.

BPW to Consider More than $670 Million in State Budget Cuts. Is the headline from todays current article. This is the first paragraph: "Funding for state agencies, entitlement programs, and local aid — including transportation, local health grants, community colleges, libraries, disparity grants, and public safety — could be on the chopping block as part of the Department of Budget and Management’s (DBM) effort to offset COVID-19-related economic woes."

So - in the state of the nation, in fact the world - how on this blessed soil, growing green real live organic materials - can a county not only have an alarming education budget, but were able to increase it to nearly the sum that the state is discussing reducing? The pass deficit budgets - but laud astro turf that is made from materials found in ... wait for it - balloons.

My wife and I have no children. I in fact dislike children. And am in fact annoyed that any childless person/s can not get a reduction in our taxes if they choose to not contribute to this ... what is it - 19K per child? What - didn't Ben & Jerry take that sum as their salary?

hard to understand why HS kids can't play football on grass...wonder how long before that $100 Million starts to get tapped...it was supposedly for "a worst case scenario"...we shall see

So let me get this straight. Those with the artificial turf got it through fundraising. They are now complaining they need it replaced because of "safety" issues (nobody can ever argue against safety issues - "you're against safety?!")). In order to achieve this replacement, they will finally give the poorer schools money for turf so they can make repairs or replacements to turf that was installed by schools through fund raising. They will accomplish this by raiding other FCPS funds like retirement for FCPS employees. Sounds pretty irresponsible of the Board to me just to appease the Middletowns and Oakdales of the county.

No the five schools that have artificial turf were budgeted when improvements were made to the school and now they need help with the upkeep. The other five schools either have to fundraise the money themselves or wait until a capital improvement is allotted for that school.

The schools that have them especially if they can afford it should fundraise the money themselves for the upkeep or at least a portion of it.

If turf fields "are more durable," how is it that Oakdale's needs to be replaced already?

The replacement of turf fields during a time of budgetary shortfalls and/or fiscal constraints, due to COVID or anything else, constitutes nothing short of malfeasance on the part of those spending taxpayer money, in this case the BOE. The fields, turf or otherwise, certainly can wait--the students and the absence of learning, on the other hand, cannot!

Public schools were created to inculcate young people in the essentials of mathematics, history, science, writing, etc., not to advance the communities interest in football or to feed the hungry. Besides, the BOE should be focused on fortifying the the distant-learning program and procuring the requisite resources for what might be another season of remote-teaching.

So what is the relationship between the need for a turf field and the "free and reduced meal" levels at a school? The need should be based on the maintenance costs of a natural grass field versus the cost of a turf field.