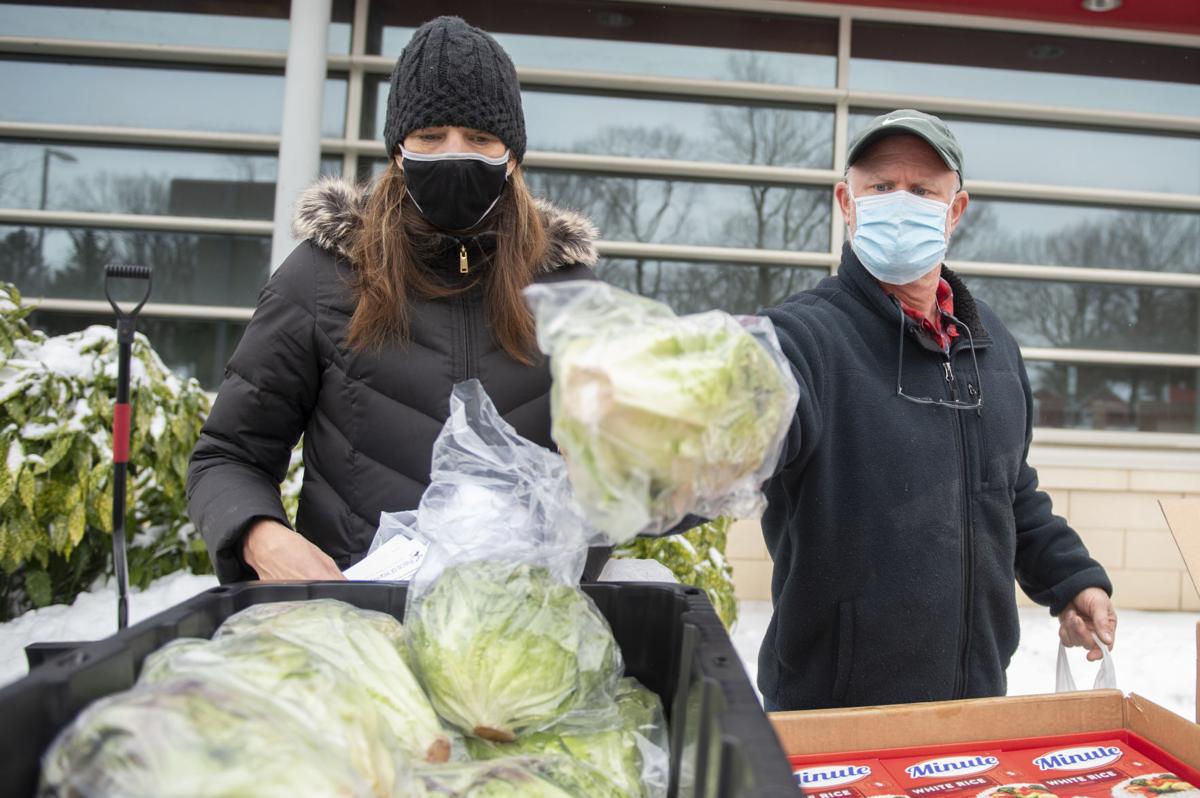 Alysia Mason Feuer, program director for Farm to School, and Randy Wixom, a volunteer with Blessings in a Backpack, pack bags of food to be distributed Friday morning outside North Frederick Elementary School. 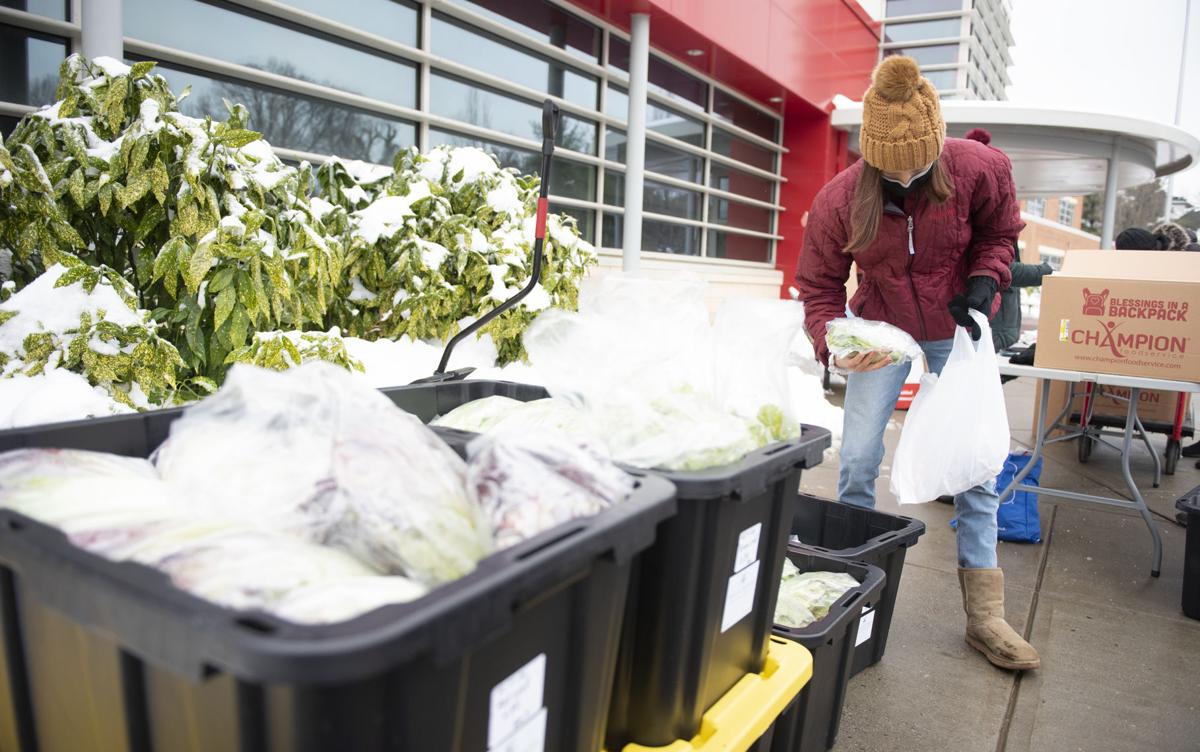 Elena Feuer, 14, packs a head of lettuce into a parcel to be distributed as part of Farm to School and Blessings in a Backpack Friday morning at North Frederick Elementary School.

Alysia Mason Feuer, program director for Farm to School, and Randy Wixom, a volunteer with Blessings in a Backpack, pack bags of food to be distributed Friday morning outside North Frederick Elementary School.

Elena Feuer, 14, packs a head of lettuce into a parcel to be distributed as part of Farm to School and Blessings in a Backpack Friday morning at North Frederick Elementary School.

Since the start of the school year, Hillcrest Elementary School students have received bags of carrots, radishes, cucumbers, lunchbox peppers and even a whole butternut squash while learning about local agriculture and where their food comes from.

It’s all part of the Fresh Fruits and Vegetable Program at Hillcrest, which was launched this year through a federal grant from the United States Department of Agriculture.

With the grant money and in collaboration with Farm to School, FCPS partnered with about five local farms this fall to acquire produce.

Farm to School is a national initiative, but locally the goal of the program is to positively impact student health and the growth of the county’s agriculture sector by increasing the availability of locally grown fruits and vegetables in FCPS.

Over the past few years, Frederick’s own Farm to School organization has worked to introduce local produce into FCPS lunch menus through tastings and educational components.

One of the organization’s biggest partners is Catoctin Mountain Orchard, which has been supplying apples in large quantities to FCPS. Orchard workers have also visited elementary schools in the past to teach children about healthy eating and how apples are grown.

When the pandemic hit in March, however, the work of Farm to School was put on hold as FCPS had to scale back and figure out how to serve free meals efficiently to children in need.

“It put [Farm to School] to a screeching halt. It really did,” said Robert Kelly, senior manager of Food and Nutritional Services at FCPS. “It was like let’s just see what’s going to happen here, there were so many unknowns. How long was this going to last and what limitations did we have at FCPS?”

For months, the focus was shifted away from getting fresh produce into the hands of students, but according to Alysia Mason Feuer, program director of Frederick’s Farm to School, the pause allowed the organization to dig in while looking ahead.

“How we’ve pivoted is we’ve focused on just really working hard to get our educational materials and website and everything on the back end so that once we get up and going again we’ll have a lot more supporting material to be able to offer to schools,” she said.

Farm to School has spent most of the year creating virtual content for FCPS classrooms such as videos showcasing local farms and how produce is harvested. The unexpected time has also allowed Farm to School to identify how and where they want to grow in the future.

“Our schools that are surrounded by farmland, our families up there are reporting difficulty accessing fresh fruits and vegetables,” Feuer said. “The ALICE report has identified a lot of households up in our rural areas, and so I really wanted to hit not only the schools that are in Frederick city but also address some rural poverty.”

The implementation of the Fresh Fruits and Vegetable Program for Hillcrest Elementary this year has also allowed Farm to School to identify and build relationships with small, local farms that may not be able to produce for the whole system but for one or two schools, Feuer said.

The program was meant to be supported by FCPS’s main produce supplier, Kelly said, but through Farm to School, local small farmers were able to be utilized, creating a win-win for everyone.

Since the start of the school year, students at Hillcrest have received a small sampling of fresh produce twice a week. It is given to both students who are attending small-group instruction and to families who stop by the school to pick up free meals.

How many students receive produce has depended largely on how much the partnering farm is able to harvest.

Andrew Grimm is the owner of Piece of Harmony, a small, family-run farm in Myersville. He was contacted by Farm to School earlier in the school year and asked if he wanted to contribute.

Grimm said it was a no-brainer.

“Anytime we can get kids involved with farming or food and connecting them to where their food is coming from, we get very excited about that,” he said. “Our slogan is ‘know your farmer, know your food’ — we try to put a strong emphasis on getting people involved.”

Grimm supplied Hillcrest Elementary with about 500 carrots last month and 300 heads of lettuce to the school system before the start of Winter Break. He hopes to continue partnering with Farm to School and FCPS in the future and increase the quantity he is able to sell to FCPS.

Programs like Farm to School are important, Grimm said, because it makes a lasting impact.

“Kids are like sponges, so at a very young age is [when] you can expose them to stuff like that, it’s just planting those seeds for the future,” he said.

Laura Genello, the owner of Dandelion and Rust Farm in Myersville, who supplied lunchbox peppers to Hillcrest Elementary students this year, agreed.

”When students are more engaged with the process of eating and growing vegetables, they’re more likely to make healthy food choices so that to me is the powerful piece of it,” she said.

Genello not only partnered with FCPS this year but also works as a Farm to School specialist for Baltimore City Public Schools. Educating students on agriculture and connecting them to local producers is important to her. She also appreciates that Farm to School helps local farmers.

“Schools are a huge institutional buyer of produce, so they really do have the potential to make a big difference for local farmers in terms of providing an outlet,” Genello said.

As the school system plans to move into a hybrid model and eventually fully reopen schools, Kelly said there are new initiatives that were put on hold that will finally be able to be implemented, such as incorporating fresh, pre-packaged salads at their free meal distributions and opening new salad bars at six elementary schools.

Long term, Farm to School’s goal is to have 10 percent of FCPS’s Food and Nutrition Services budget spent on procuring local produce by 2025. Currently, the department spends about 1 percent.

When asked how purchasing local fruits and vegetables impacts the department’s budget Kelly said fresh produce can be pricey and that as a department they have to remain cost-conscious. But investments can be made every now and again, and the produce can be used in creative ways to help the value go a little further, he said.

Despite the costs, though, everyone involved from the farmers to the folks at FCPS are excited to move forward and get more fruits and veggies into the hands of students.

“We’re all anxiously awaiting to move forward. We had so many exciting plans for this school year to try different things, and we were looking forward to that and we will get there again. I believe we will and just can’t wait for that to happen,” Kelly said.

Farm to School is a great program, run and funded by Community FARE. The author neglected to mention that there are many wonderful volunteers that help steer the program and make decisions, form partnerships and fund raise for the continuation of the work.