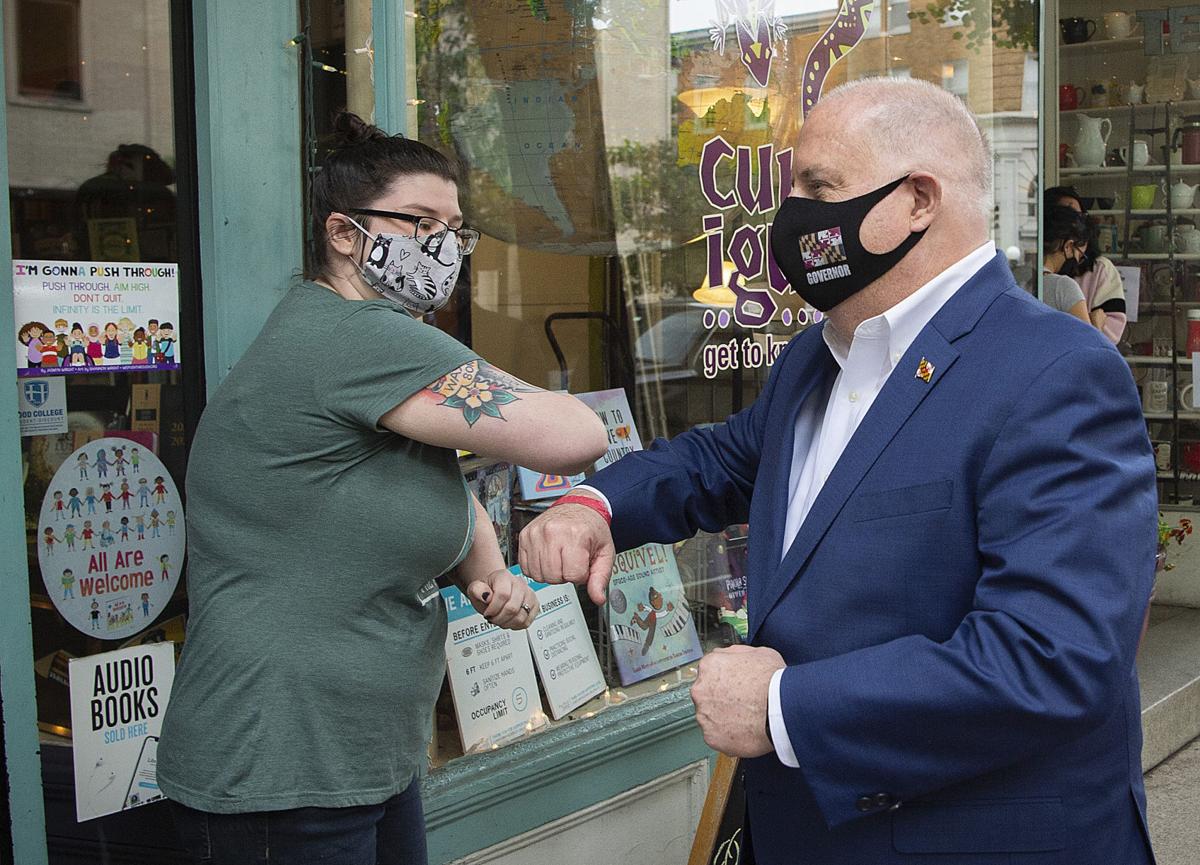 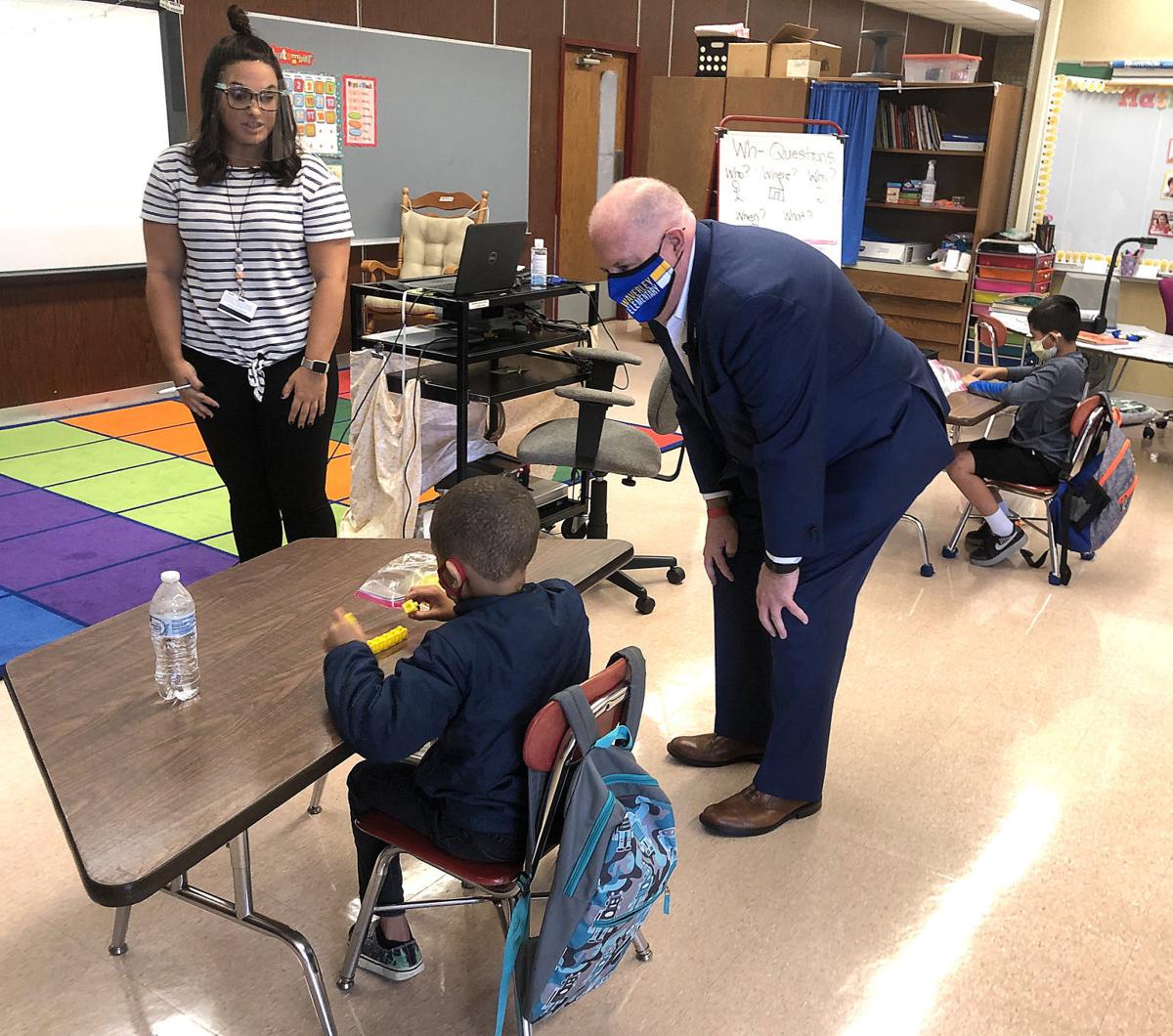 During their visit, Hogan and Salmon toured Waverley Elementary School and the Frederick County Career and Technology Center (CTC). The governor then took a tour of downtown Frederick, speaking with business owners and residents on the street.

The Frederick News-Post was denied access into the schools as the state only allowed one pool reporter in the building, but the News-Post learned that during his tour of CTC, Hogan visited a nursing class and got his blood pressure taken by a student. He received a clean bill of health from the student with it being 120 over 80.

"I couldn’t be more thrilled to have the opportunity to be here in Frederick County and to see the incredible work that the school board and the superintendent and principals and teachers are doing here. We're really glad to be getting some kids back in the classroom for some face-to-face instruction," Hogan said during a press conference.

He added that the state has done a good job of keeping the pandemic under control, but that it is not yet time to fill the schools with kids.

"Obviously we are not going to do anything that endangers our kids, but we think it’s important to really try and make efforts to get them back into face-to-face instruction," he said.

Hogan and Salmon toured the schools with an entourage of about 10 people that included security, members of the governor's team and official photographers. When asked if he was concerned that their visit might have unnecessarily exposed students and staff in the schools to the virus, Hogan said they made sure to take the necessary safety precautions and that they have been touring schools across the state.

FCPS Schools Superintendent Terry Alban said when she first learned that Hogan and Salmon wanted to visit, she was concerned about the health and safety of students and staff in the building.

"Our protocol is no visitors in the building...limiting the number of people in the building is one of the safety protocols. The movement through was very quick and...everybody kept their mask on," Alban said.

"It's kind of hard to tell the governor he can't come."

She added that she thought the governor's motivation for the visit was to show the possibility of bringing students back.

While walking downtown, Hogan spoke with people enjoying an outdoor lunch and spoke with a few workers and owners of small businesses.

Lauren Nopenz Fairley, operations manager for Curious Iguana on Market Street, said she appreciated the governor coming to Frederick and hopes it gave him an idea of what local shops are dealing with.

"I think it's important to see how impossible it is to have full capacity right now especially with the pandemic. So I'm glad he’s actually getting the opportunity to walk around and see the businesses and have a better idea of what each individual city and county might need,” Fairley said.

Andrea Cheeatow and Rodney Weaver were having lunch at Firestone's Culinary Tavern when Hogan passed by and stopped to chat. Both said they are supporters of him and are happy with the way he has been governing the state throughout the pandemic.

“This is not a political decision, it’s a science decision and he’s done a great job adhering to that," Cheeatow said.

If your kid is stupid, you're up a creek.

We really need a new governor as well as new president. Their personal corruption is unbelievable.

In person classes?!? I've been trying to get both of my kids back into school as they are struggling with not only connectivity but FAILING grades as well and I'm told that there aren't enough resources to support that. Guess it just depends on who you are and how much of a fuss you cause!

Not sure what you mean about who you know. Who is getting special treatment?

Hey Govenor is there any truth to the rumor that they are going to build a bunch of townhouses on your property on New Design Rd?

Question? Is there a reason why the teacher would not be wearing or want to wear a mask in class? Children can be carriers, right? Aren’t there concerns about the risks of carrying the virus home to immediate family members? It is my understanding one of the major concerns about having students returning to class is the focus segment of the overall population who are complacent or ignore safety precautions all together resulting with potentially spreading the virus.

Correction. Looking closely. Appears she has shield and mask is hanging to side?

What did he say about that stupid proposed hotel?