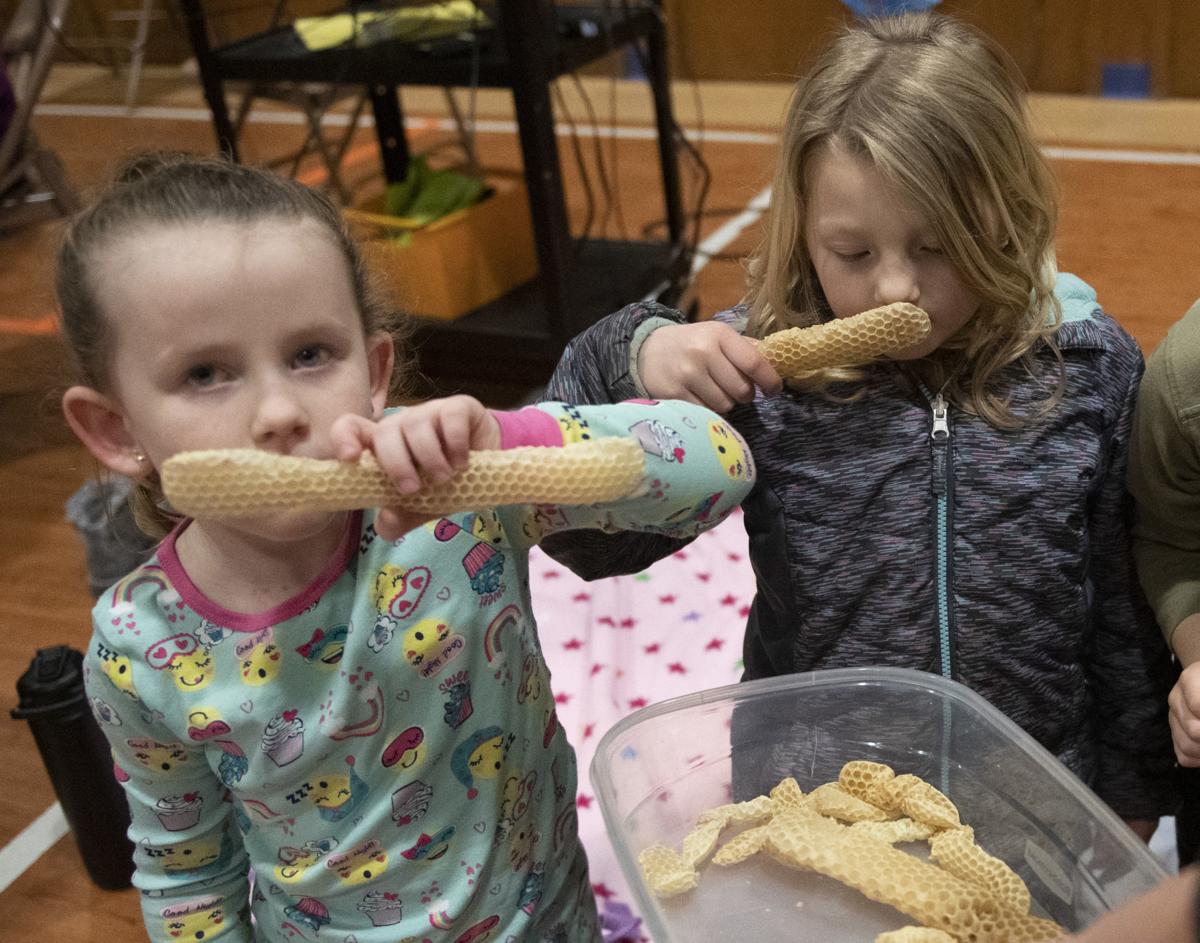 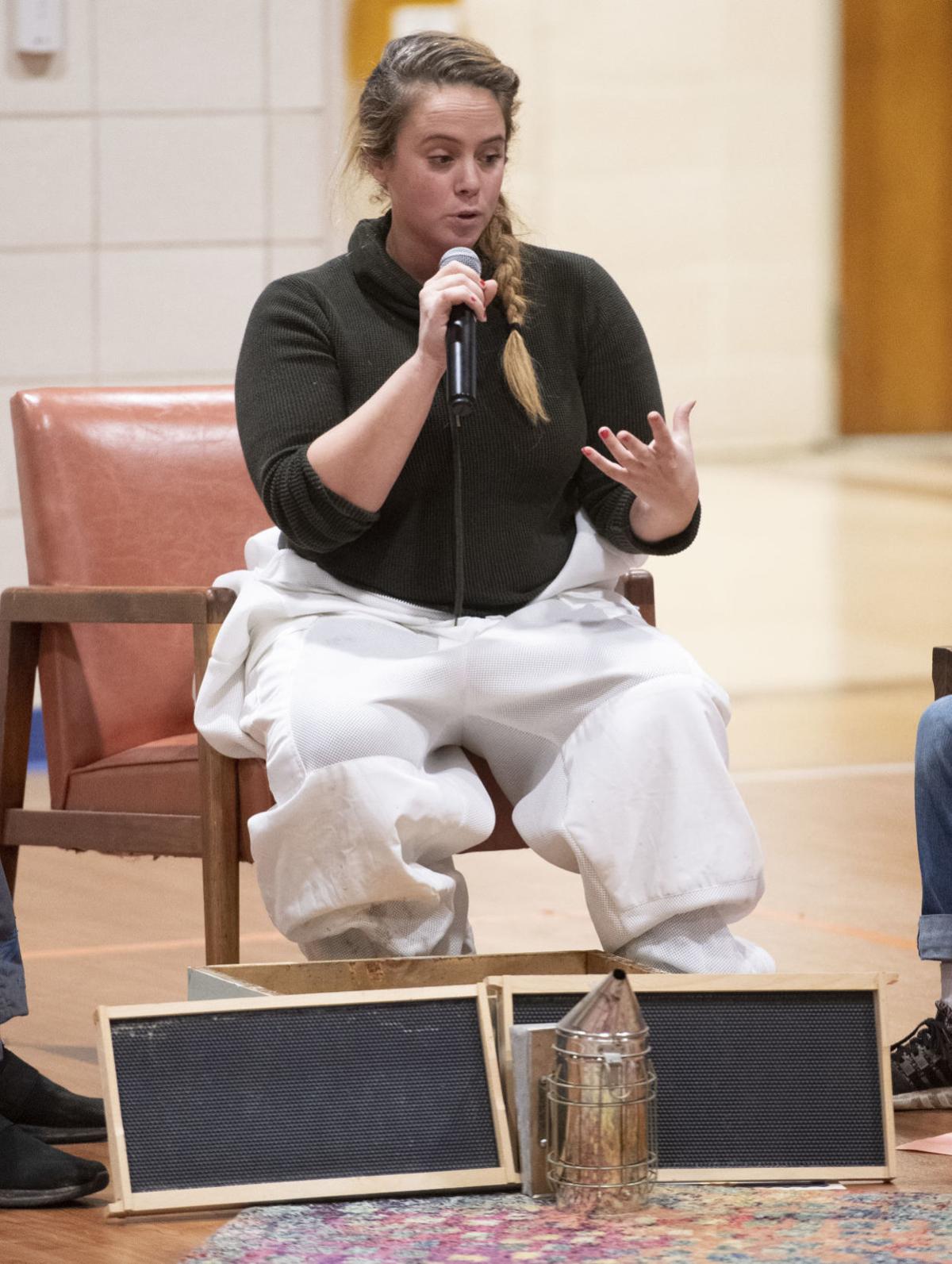 Beekeeper Amie McDaniels adressed an audience of children and their parents during the question and answer portion of a Bee Night event Saturday at Mother Seton School in Emmitsburg.

Beekeeper Amie McDaniels adressed an audience of children and their parents during the question and answer portion of a Bee Night event Saturday at Mother Seton School in Emmitsburg.

Beekeepers demonstrated their equipment and told students about their experiences with the insect during Mother Seton School’s first Bee Night.

The students, dressed in pajamas and snuggled in blankets, watched a documentary about bees after the presentation. There was even free popcorn.

The kids got the chance to touch real honeycomb and see Amie McDaniels put on her beekeeping suit, which she says she rarely needs anymore. She chooses to forgo wearing gloves when working with them.

“As long as you go slow, they’re really gentle,” she said.

Art teacher Karolyne Myers developed the idea for Bee Night after doing a school-wide bee unit in the fall. She always begins the school year with a unit suited for all grades in order to foster community within the school. Each grade focused on a different aspect of bees and completed different projects.

“So I have been talking to the students about bees since the beginning of the school [year], all the art is on display, and now we’re pulling it together with the Bee Night,” Myers said.

The Bee Night was also an opportunity for the students to engage with their families.

Albert Nastasi and Kathleen Nastasi took their 6-year-old son Noah to the Bee Night because they thought it was a great time for community among the kids and families.

“It’s a good opportunity to learn and support the kids,” Kathleen Nastasi said.

Jackie Whittington took her 8-year-old daughter Lucy Whittington to Bee Night to learn something in addition to what she was learning in school. Lucy’s older sister, Melissa, was also interested after taking a class on beekeeping in college.

“I was probably meant to be a beekeeper,” she said.

Two sixth-grade boys interviewed McDaniels and fellow beekeeper Nevin Camp about the practice. Other students chimed in with additional questions, like 9-year-old Joey Claver. Claver is interested in bees for a simple but important reason.

“They pollinate my flowers and trees,” he said.

Myers was impressed by how taken the students were with the bee topic, diving right into all the information and the projects.

“I never thought I would have gotten this involved with bees. But they are so amazing, and even the kids, I saw the lightbulbs going off in their heads,” she said. It was just amazing, it was easy for them to write about them.”

In addition to educating the students, Myers hoped to educate some of the parents.

“Promoting honeybees in our environment is very, very important,” Myers said. She said that it’s important for parents to know not to immediately spray or kill bees, as there are other options that will keep the pollinators alive.

Both McDaniels and Camp said that bees have taught them a lot, too.

“They’ve taught me to be patient,” McDaniels said. “Slowing down is really important.”

She said working with bees requires a slower pace, as to not agitate or crush the bees.

Camp agreed, and said that bees have always impressed him.

“It’s amazing that this insect … their whole life is centered around the hive and feeding the community,” he said. “It’s amazing.”