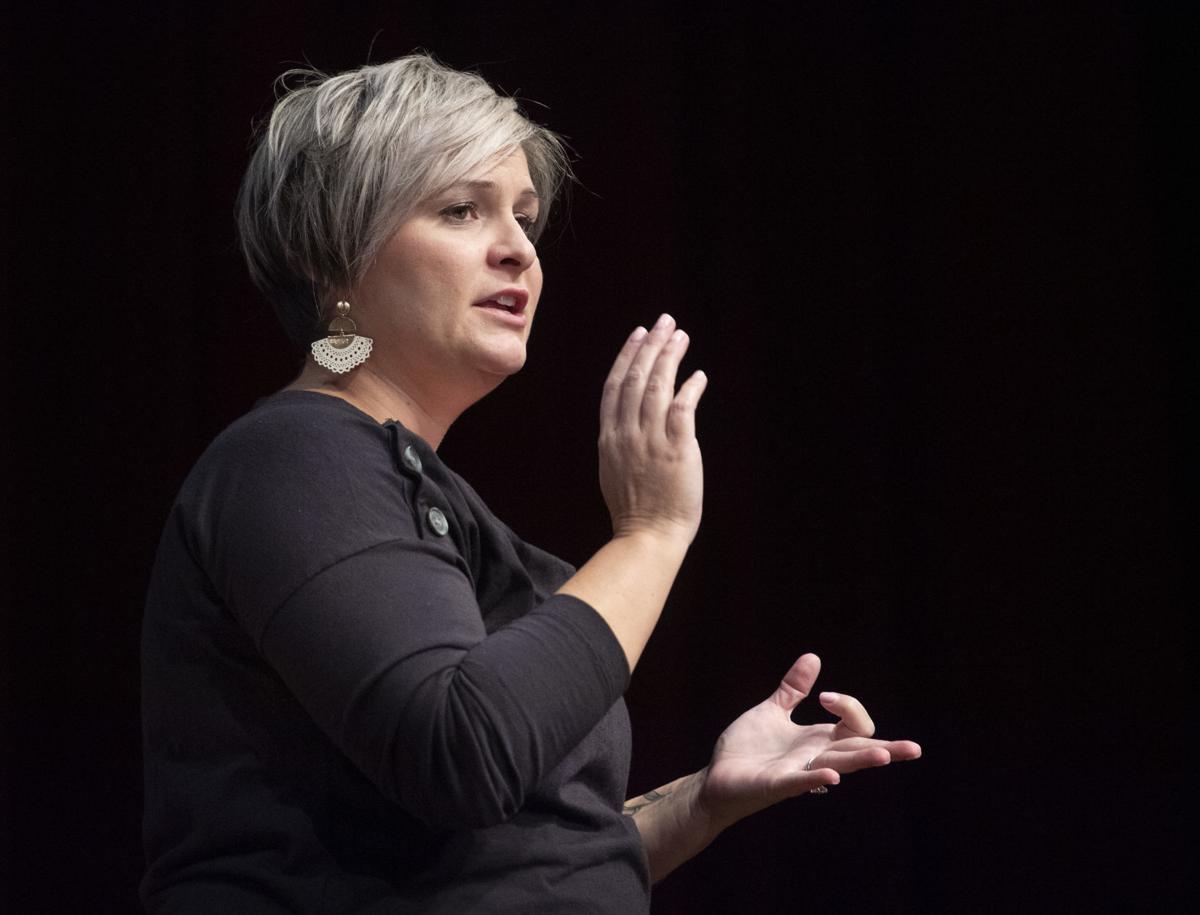 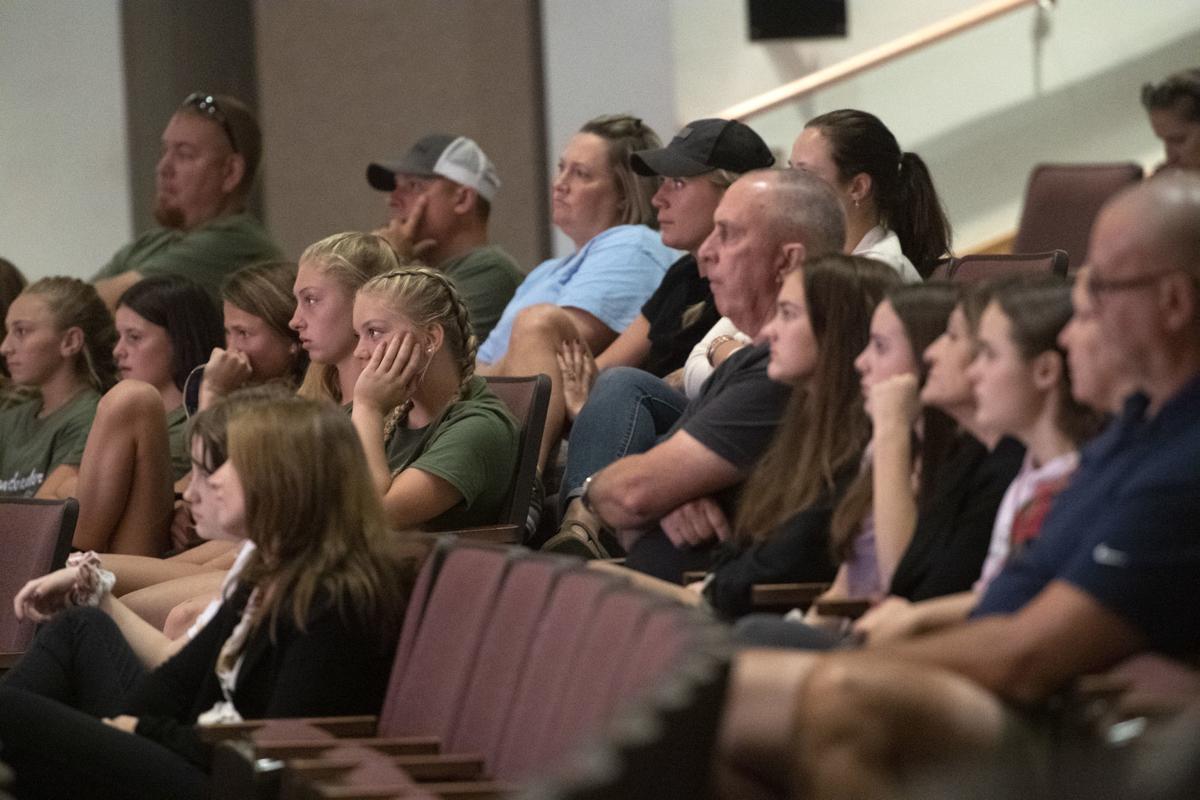 Attendees listen as Frederick lawyer Meaghan Delawter gives a lecture Wednesday as part of the Moving Mountains Speaker Series in the Jack B. Kussmaul Theater at Frederick Community College.

Attendees listen as Frederick lawyer Meaghan Delawter gives a lecture Wednesday as part of the Moving Mountains Speaker Series in the Jack B. Kussmaul Theater at Frederick Community College.

Meaghan Delawter told a group of about 50 people the story of how she chased down and killed a lion.

The people sitting Wednesday night in the Jack B. Kussmaul Theater at Frederick Community College looked confused and skeptical of Delawter’s story.

They were right to be skeptical. Delawter hadn’t actually slaughtered a lion, but she had chased down and killed her fear — her fear of failure.

Letting go of fear was the theme of Delawter’s talk, which was the first of this school year’s Moving Mountains Speaker Series.

The series, now in its fifth year, was started by Mike Pritchard, director of special projects at FCC.

“I really wanted to give teens and young adults an opportunity to hear from local professionals. We have so many tremendous professionals locally and regionally who have done amazing things,” Pritchard said.

Almost every speaker is someone from Frederick or the Mid-Atlantic region, and all volunteer their time to come speak.

Although the series is hosted at FCC, Pritchard said his target audience is middle schoolers and high schoolers.

“[Teens] face so many challenges in our society and culture and just in life, and I really wanted this to be a safe place where they could think outside the box a little bit and challenge themselves,” Pritchard said.

Pritchard said he chose Delawter to kick off the series this year because her message is universal.

“For a lot of teens, they can achieve more in their life than they realize, and I think fear prevents us ... from taking that next step,” Pritchard said. “What I like about Meaghan is ... her message is applicable across a wide range of disciplines.”

Delawter is an attorney and founder of Meaghan Delawter Law, a local practice that focuses on family law cases.

Her fear, as she explained Wednesday night, was that she wasn’t good enough and that she would fail if she tried to take a leap and start her own practice.

“My obsession with perfection paralyzed me, and I always wanted to see that net before I jumped so it could catch me if I fell,” Delawter told the audience.

Eventually, though, without being able to see the net, Delawter decided to jump. She quit her job and started her own practice not knowing whether it would be successful.

“Don’t allow fear to steal your future,” she said.

Moving Mountains was not the first speaking engagement for Delawter. She is well-known in the Frederick community and said she speaks at many high schools.

“I wish that I would have heard this at 14, which would have changed how I did things from that point on, so there’s a benefit to doing it that young,” Delawter said. “But at the same time, this very much does speak to all ages.”

The lawyer and former college golfer said that even though she does many speaking engagements, it’s sometimes difficult for her to understand why people want to hear her story.

“I don’t feel like my story is that worthy of sharing because I feel like there are other people who have certainly been through way more than I’ve been through,” Delawter said. “In a way, it’s humbling that people want to hear it, but at the same time it really puts it in perspective for me.”

Jasmine Broadnax is a second-year graphic design student at FCC. She and her mother came out to hear Delawter speak.

“Everybody needs motivation,” Broadnax said. “There are so many pressures people have now versus what my mom had as a kid. ... It’s easier to be afraid, so little things like [these events] help.”

Broadnax said there are a few fears she hopes to overcome after hearing Delawter speak, which fits in perfectly with Delawter’s goal for the evening.

“I’m hoping there’s at least one kid ... that immediately takes it and runs with it and does whatever that thing is that’s holding them back,” Delawter said.

The Moving Mountains speaker series will continue through March with four more speakers. The next event will be in November and will feature a local business owner who will speak about lessons she learned through hiking the Camino de Santiago in Spain.

For details, go to frederick.edu/about-fcc/moving-mountains.