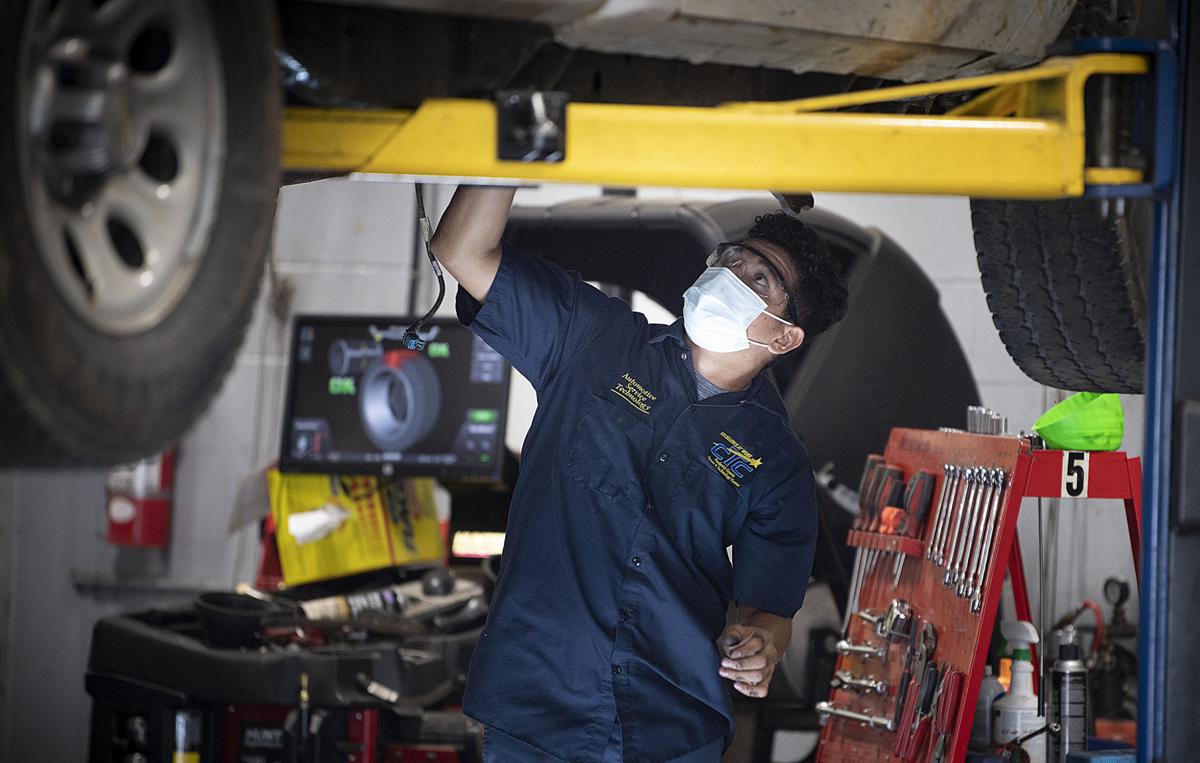 Lester Gonzalez works on an oil gasket replacement under a truck on a lift in the garage area of the Automotive Service Technology class at the Frederick County Career and Technology Center. 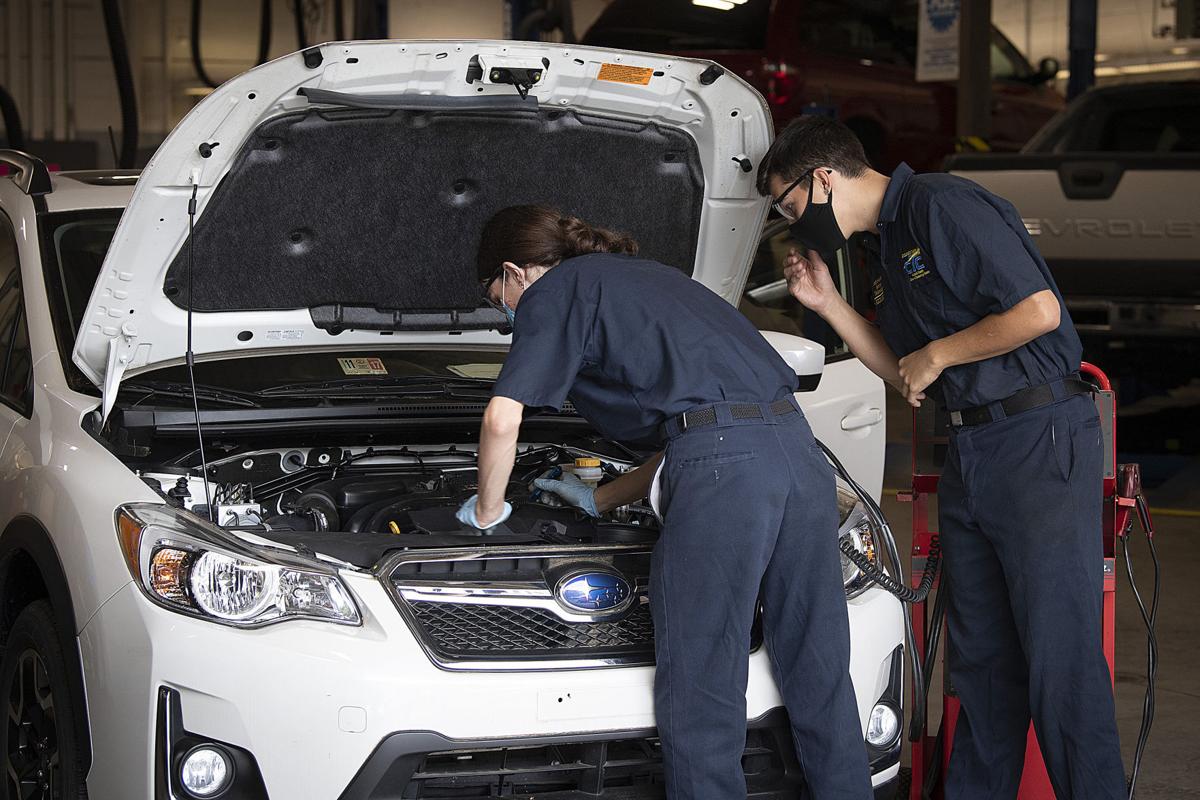 Michael Cunningham, left and Richard Schoonover, use a computer diagnostic machine to check for electrical issues on a car they were repairing at the Frederick County Career and Technology Center. 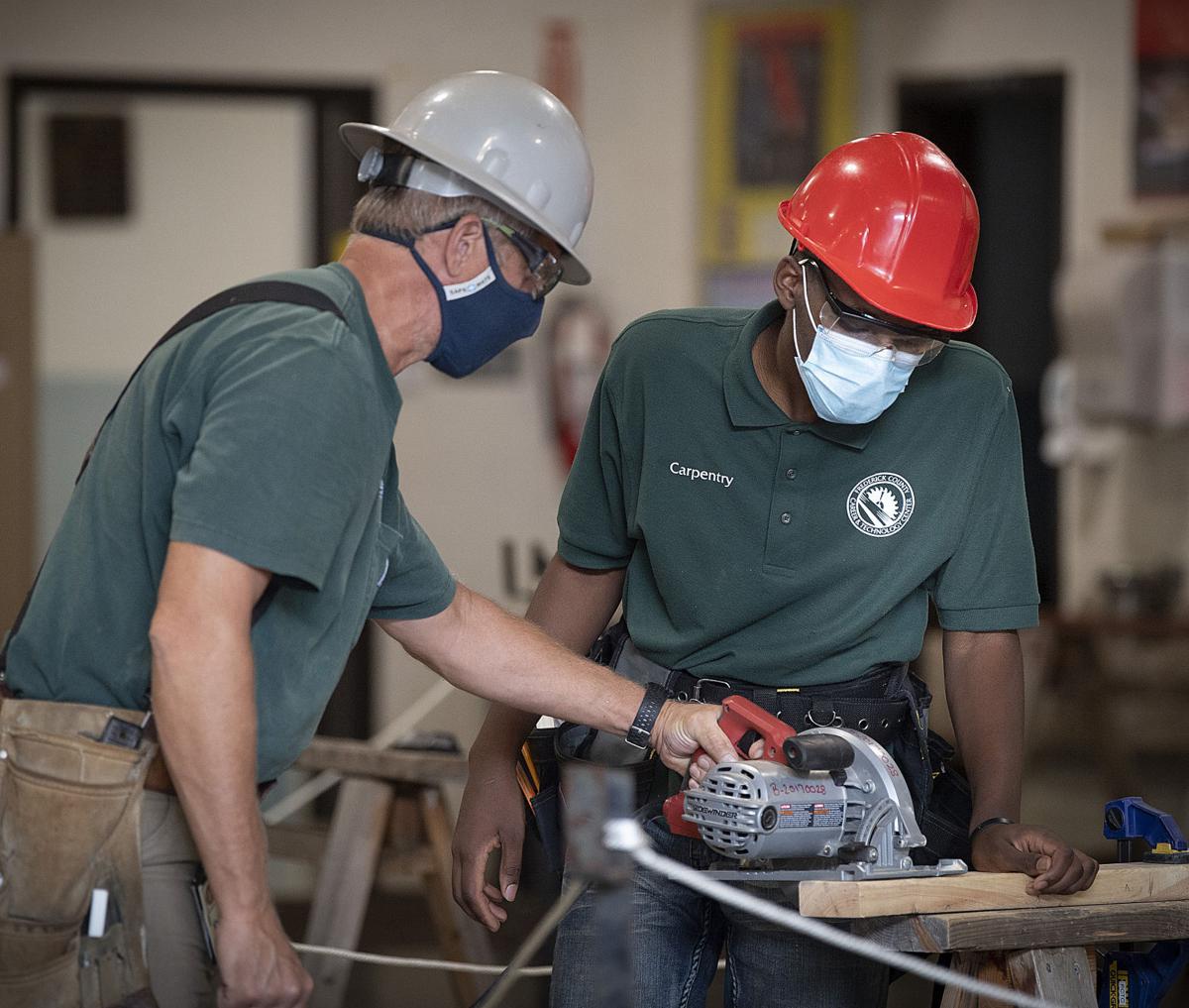 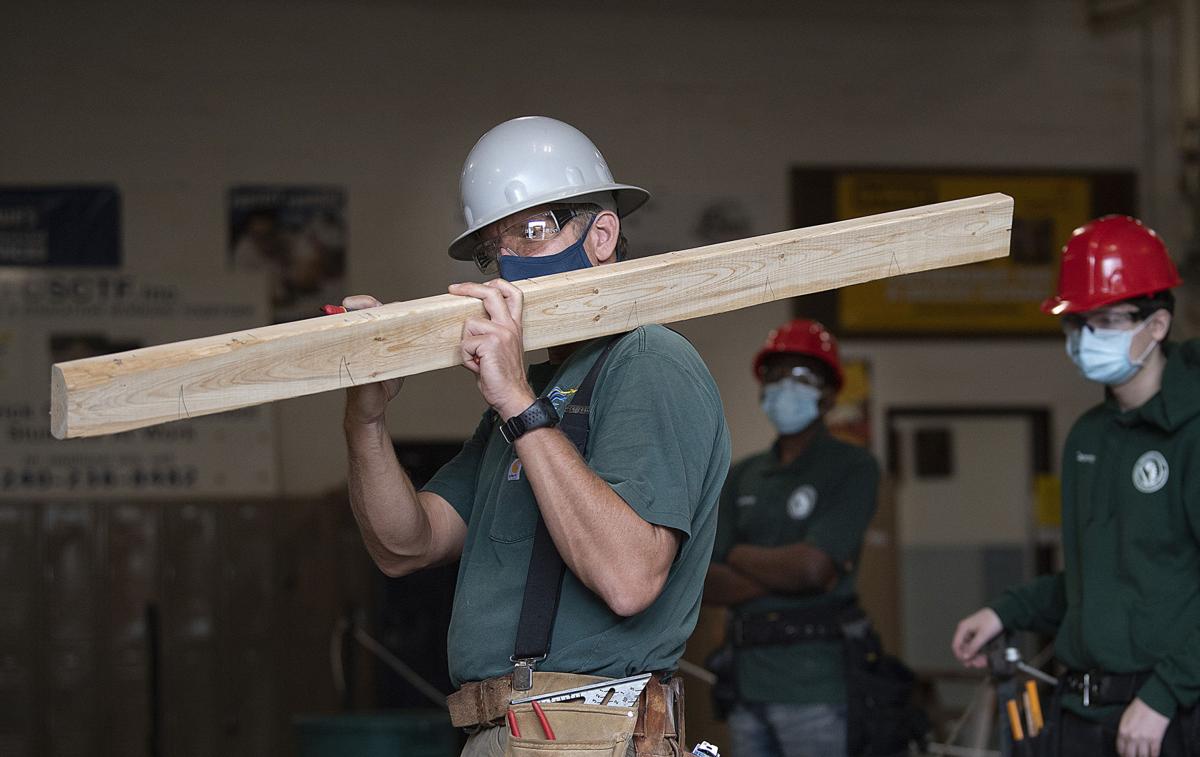 Lester Gonzalez works on an oil gasket replacement under a truck on a lift in the garage area of the Automotive Service Technology class at the Frederick County Career and Technology Center.

Michael Cunningham, left and Richard Schoonover, use a computer diagnostic machine to check for electrical issues on a car they were repairing at the Frederick County Career and Technology Center.

When students enroll in programs at the Frederick County Career and Technology Center, they often expect a lot of hands-on learning to occur.

Most programs lead students down specific career paths and offer them ways to acquire industry certifications by the end or funnel students into apprenticeship programs where they often find employment right out of high school. Programs at CTC allow students to learn skills in the fields of carpentry, cybersecurity and culinary arts among others.

When the pandemic hit and CTC transitioned to online learning, there was concern among students, staff and parents about how critical components of education at CTC would continue.

In mid-September, the center began bringing back small groups of students for in-person learning. The Frederick County Board of Education approved certain groups of students, such as English language learners, special education students and those at CTC to begin returning to the physical classroom.

CTC Principal Michael Concepcion said that after surveying staff members and students, and determining how many people wanted to return to the building, the students were split into four groups.

Each group attends in-person classes at CTC for a few hours one day every other week.

Students and staff must wear masks while in the building, and drop-offs have been rearranged to prevent too many students from entering through one entrance.

Currently, there are between 120 students coming in for classes on each assigned day, Concepcion said. Each class is capped at 12 students, except for the Automotive Service Technology class, which has a large auto garage and is able to safely hold a few more students.

Teachers take advantage of the large outdoor spaces that surround CTC and often bring students outside for lessons or mask breaks.

Gary Wilfong, an instructor in the automotive service technology program, said both he and his students are happy to be back working in the garage. It’s one thing to learn how to fix cars through a video or manual, Wilfong said, but it’s nothing like having the parts right in front of you.

“For a lot of folks, it just doesn’t make sense until you get in there and you take it apart and you figure it out,” Wilfong said.

There’s an added benefit of working together on one project — something that is hard to do virtually.

“The hands-on component is a crucial part of our instruction and the things we do, but the social interaction, they collaborate, they bounce ideas off each other and just that social aspect is I think really what a lot of them are missing,” Wilfong said.

Curtis Arnold, a senior at Gov. Thomas Johnson High School who is enrolled in CTC’s Cybersecurity program, said coming back to the classroom has been a nice aspect to an otherwise very different year.

“It was nice to get back to at least a little bit of normalcy, and I got to see some of my friends that I haven’t seen since last year,” Arnold said.

Some of his work at CTC involves breaking down computers and repairing them. In order to develop that skill, Arnold said it’s important to be able to do it in-person.

“For me, it’s muscle memory, and a lot of things are color-coded, and it’s easier to see that in person, and you memorize it better...you also get to look at all the parts and memorize what all the parts are,” Arnold said.

He did have some concerns at first about returning to the building and being in close quarters during a pandemic.

“I have a little sister, and she actually has really bad asthma, so my parents were pretty careful when we were looking at it, and we were a little concerned, but we felt the precautions were good, and everyone is taking it seriously, so I felt comfortable when I was there,” he said.

In order for programs at CTC to return to some in-person learning, the first step was making sure teachers were comfortable coming back in, Concepcion said.

So far, about 80 percent of CTC staff have returned for this semester, Concepcion said.

Wilfong said the risk that accompanies coming in to teach is always in the back of his mind, but he feels the school system is taking the right precautions.

The remaining staff declined to come in for various reasons including concerns about health and safety, and therefore some programs are still operating in a full virtual mode.

Zach Howard, instructor for the physical rehabilitation program at CTC, made the decision to keep his classes online this semester.

“It’s a tough time to be a teacher right now and I don’t think there’s any right or wrong decision, but I definitely think there is this undiscussed pressure to be in the classroom right now that kind of looms over people,” — Zach Howard, instructor for the physical rehabilitation program at CTC

Howard said not all of his students were ready to return and that the first-semester curriculum for the program, which is very textbook and lecture heavy, worked well enough online that he didn’t feel students were missing out by not returning to the classroom.

Howard also has newborn twins at home and didn’t want to put his family at risk. The decision was not an easy one to make.

“It’s a tough time to be a teacher right now, and I don’t think there’s any right or wrong decision, but I definitely think there is this undiscussed pressure to be in the classroom right now that kind of looms over people,” he said.

Howard does hope to bring the program back to CTC’s campus for next semester though, as students will be transitioning into a more of a hands-on and practice-based curriculum.

Claire Smith, a junior from Walkersville High School, is in her first year of the physical rehabilitation program. Right now, she doesn’t mind learning the curriculum online but hopes to be able to return to the building next semester.

“Personally, I would jump at the chance to go in person for this class. I think it would really help me visualize the learning, and I think all of us are taking the proper precautions to stay safe, so I think it would be fine to go back in,” she said.

Emily Preza, a second-year student in the program and a senior at Frederick High School, said she will have to see how the county is fairing with the virus before she makes a decision about in-person learning for next semester.

“It’s hard because it’s such a hands-on program, so some of the stuff that we’re learning like exercises and stretches, it’s kind of hard to practice it now in-person,” Preza said. “It would really depend on how everything is going, if I feel like this virus is getting worse or it’s still unsafe, then I wouldn’t feel too comfortable going back.”

For the students who are already back, they seem to be comfortable and happy to get their hands moving again.

“There was a student that was in here last week, and we asked him how does it feel, and he called it sweet relief,” Wilfong said.

As the Frederick County Career and Technology Center resumes in-person classes, students are also getting back to work on their home build, wh…

Why the snarky headline? The deadly pandemic is real.

Snarky? No. You learn the trades by doing them. You can't learn to fix cars from a book, or online instruction. It's hands on, with a master mechanic giving instruction. Same for HVAC, electricians, plumbing, etc.