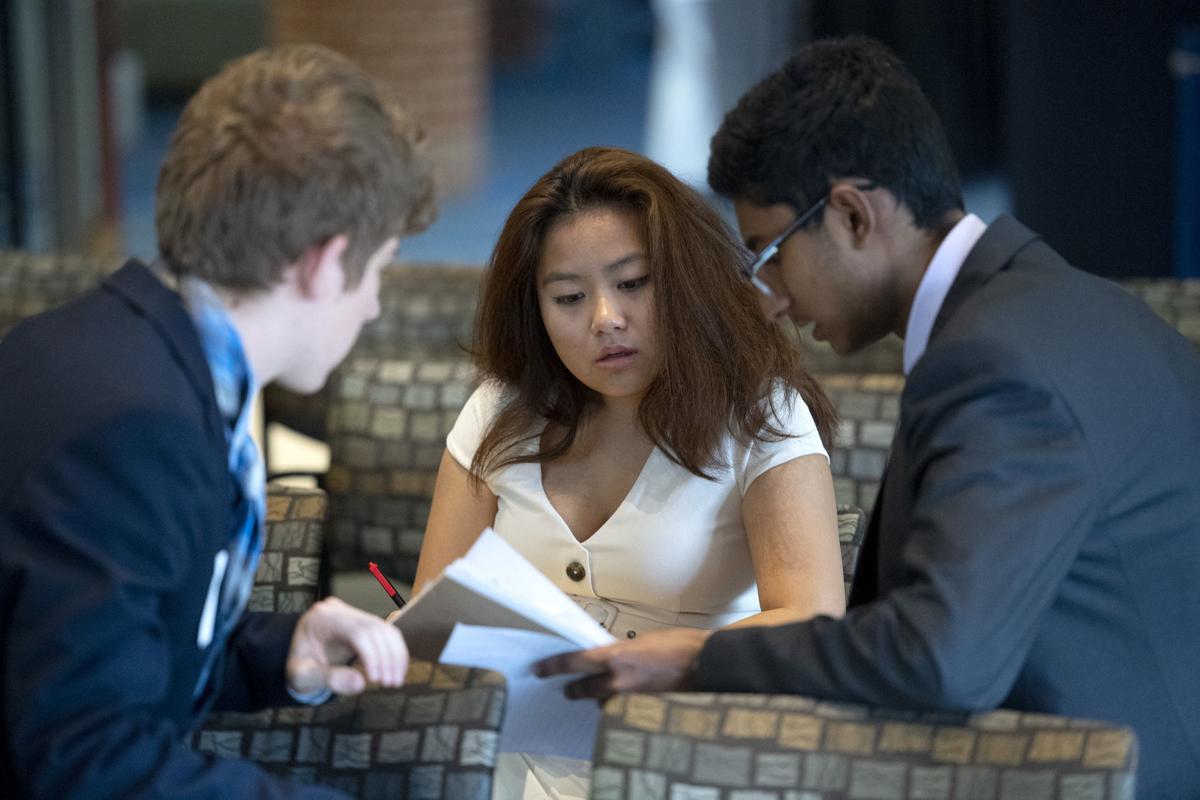 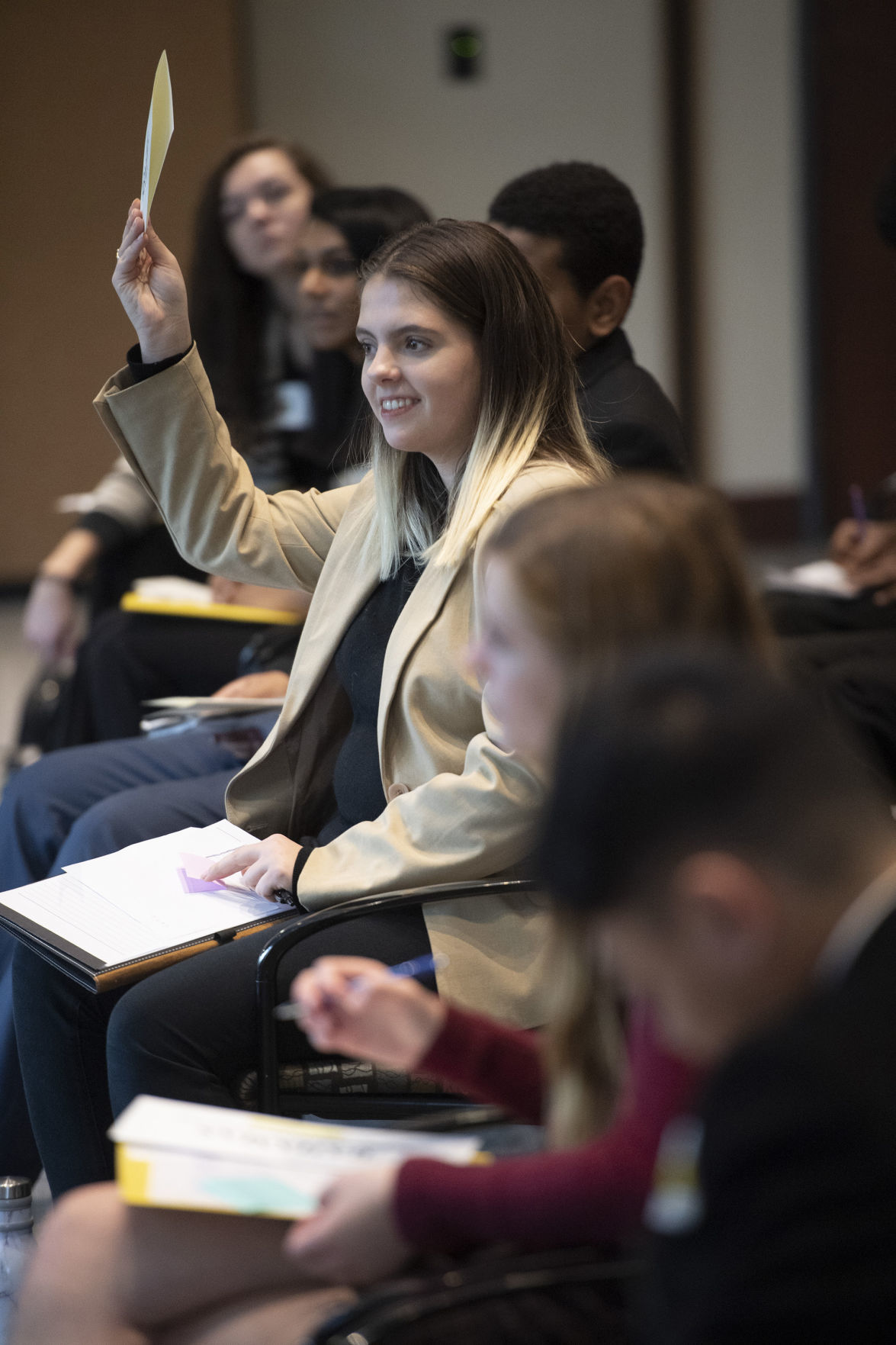 Valerie Graham, representing Armenia in a Model U.N. event, raises her placard during an afternoon session Saturday at Hood College.

Valerie Graham, representing Armenia in a Model U.N. event, raises her placard during an afternoon session Saturday at Hood College.

More than 250 students discussed, debated and compromised on topics such as artificial intelligence and internet privacy at the Model United Nations Conference on Saturday at Hood College.

At the Model U.N., students emulate a real United Nations committee or assembly, with each student representing a different country. The program is an opportunity for students to practice their public speaking and research skills, said County Coordinator Devon Ketrow.

“They learn ... how to address people, how to work with tact and diplomacy, how to build groups and coalitions, how to cooperate and work together and how to compromise, because in a real setting, you’re not going to get everything that you want,” Ketrow said. “And learning how to build that cooperation with other nations that might agree with you on some aspects but not another, to get a resolution that will be acceptable to both of you is a huge skill that will serve them for the rest of their lives.”

This was the 15th year the conference was held at Hood College. The FCPS brought students from eight of their 10 high schools, in addition to Ballenger Creek Middle School. Students from Howard, Loudon and Baltimore Counties also attended.

The topics they discussed wouldn’t be easy for adults to reach resolutions on, spanning human organ trafficking and the crisis in Venezuela. One committee met entirely in Spanish and discussed eco tourism and sustainability.

“This is hard to do when it’s your native language and there were some native speakers in the room, but most of the students who participated in that group were non-native speakers,” said Colleen Bernard, curriculum specialist for social studies for FCPS. “And they really did a nice job.”

Jansen is a native Spanish speaker but said that she is not yet fluent.

“I’m really into cultural and global relations so I thought this would be a great way to combine my passions,” she said.

The students spend time at club meetings researching their countries to develop their stances. Oftentimes, it takes a lot of research to really develop that stance, since it’s not an easily ready piece of information.

Sabrina Sutter, a senior at Oakdale High School, said that writing a good position paper requires “a thorough understanding of the topic on the international stage,” as well as how the student’s country views that issue.

Sutter won an award for her position paper. It was her first conference, and she said that while she was nervous, she knew that it was something she’d enjoy.

“It was intimidating but in a good way,” she said.

Brina Ratangee, a junior at Urbana High School, said that she initially joined Model U.N. because of her love for history.

“I love history, and a lot of Model U.N. is dealing with the consequences of history,” she said. Rantangee won an award for her position paper in the security council.

Grace Morris, a senior at Catonsville High School in Baltimore County, won best delegate for the environmental committee. She said that she fell in love with Model U.N. because she loves being able to talk to lots of people and understand different points of view.

The research, she said, is all worthwhile.

“It’s fun to see it culminate in one position paper, a couple hours of debate, and get a resolution passed,” she said.

The conference was free for all students to attend, something that Ketrow and Bernard find important.

“One of our goals for this program is that everyone has the chance to be involved in an academic event like this,” Ketrow said, “and they have that chance to experience an academic environment that Model UN provides so it is free of cost to all the students.”

Bernard said that the conference was one of the best they had ever had.

“It’s just so heartening to see kids so dedicated, and truly it’s the next generation of America. We often read about the negative things, and see the negative things about this generation and about our society and you don’t see that here,” she said. “You see the good, you see those who are dedicated to affecting positive change in the world.”

“The real UN could learn some lessons from our kids,” she said.

Nice to read about such a great ;earning ex[experience.