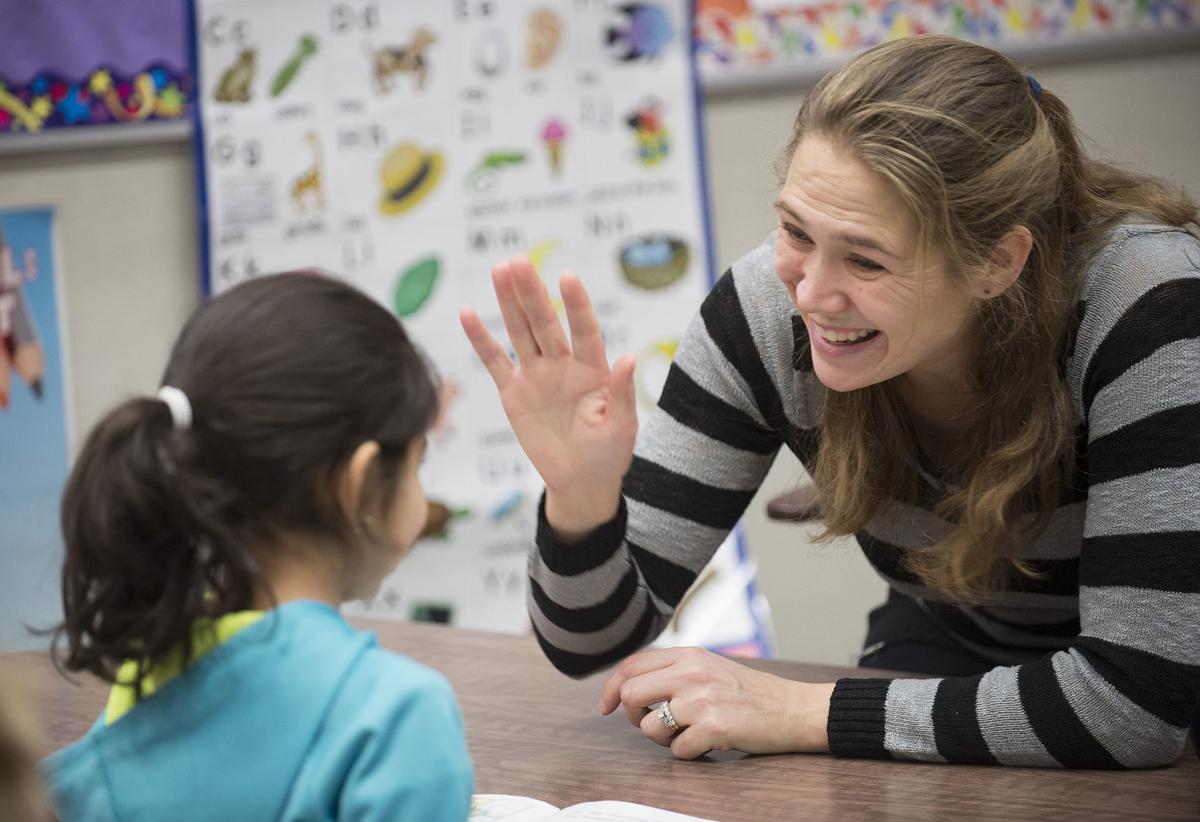 Myersville Elementary School first-grade teacher Michelle Carpenter gives a “high-five” to a student for her work on a reading task. 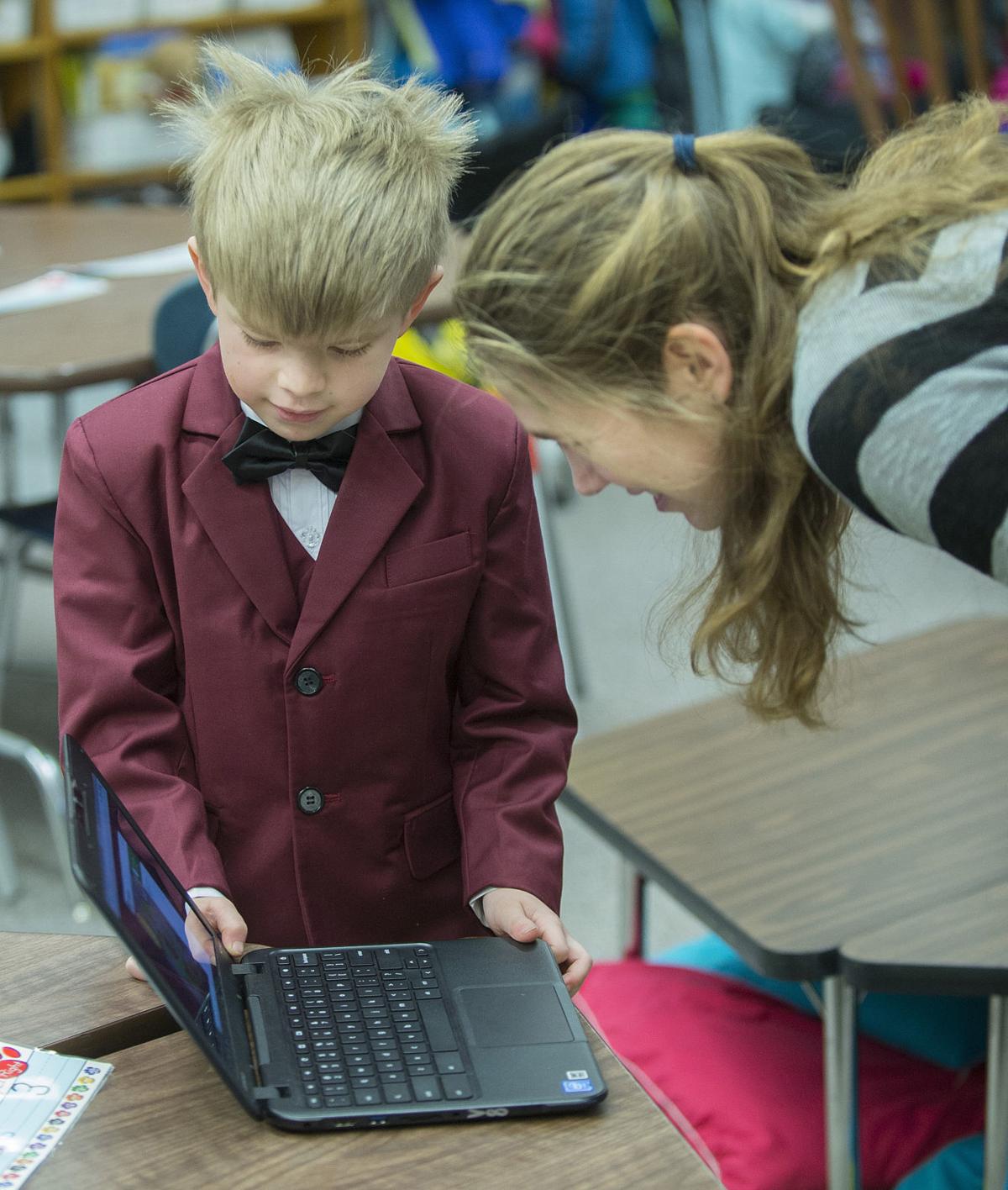 Remington Adams works on his Chromebook with his teacher, Michelle Carpenter, in her first-grade classroom at Myersville Elementary School. 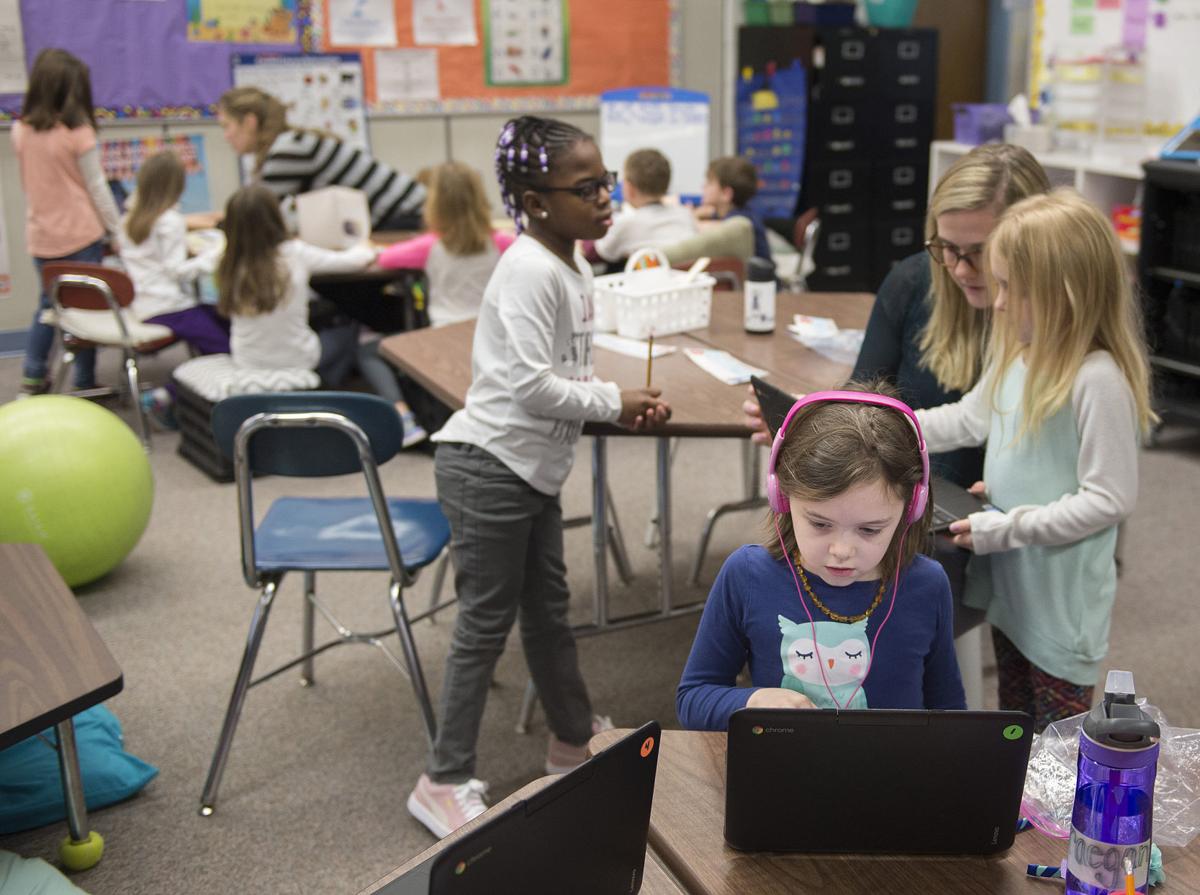 Zoey Grimm uses headphones on a Chromebook as she works on a language arts project as other first-grade students do a variety of styles of language arts learning. 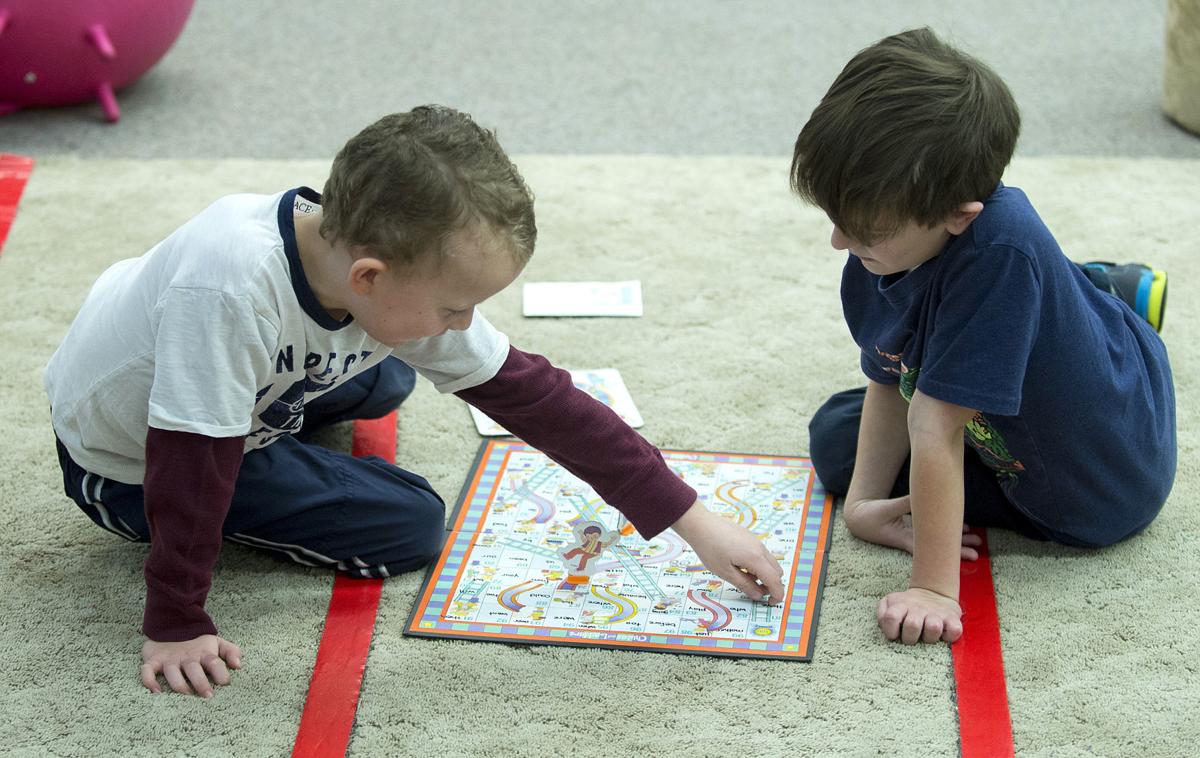 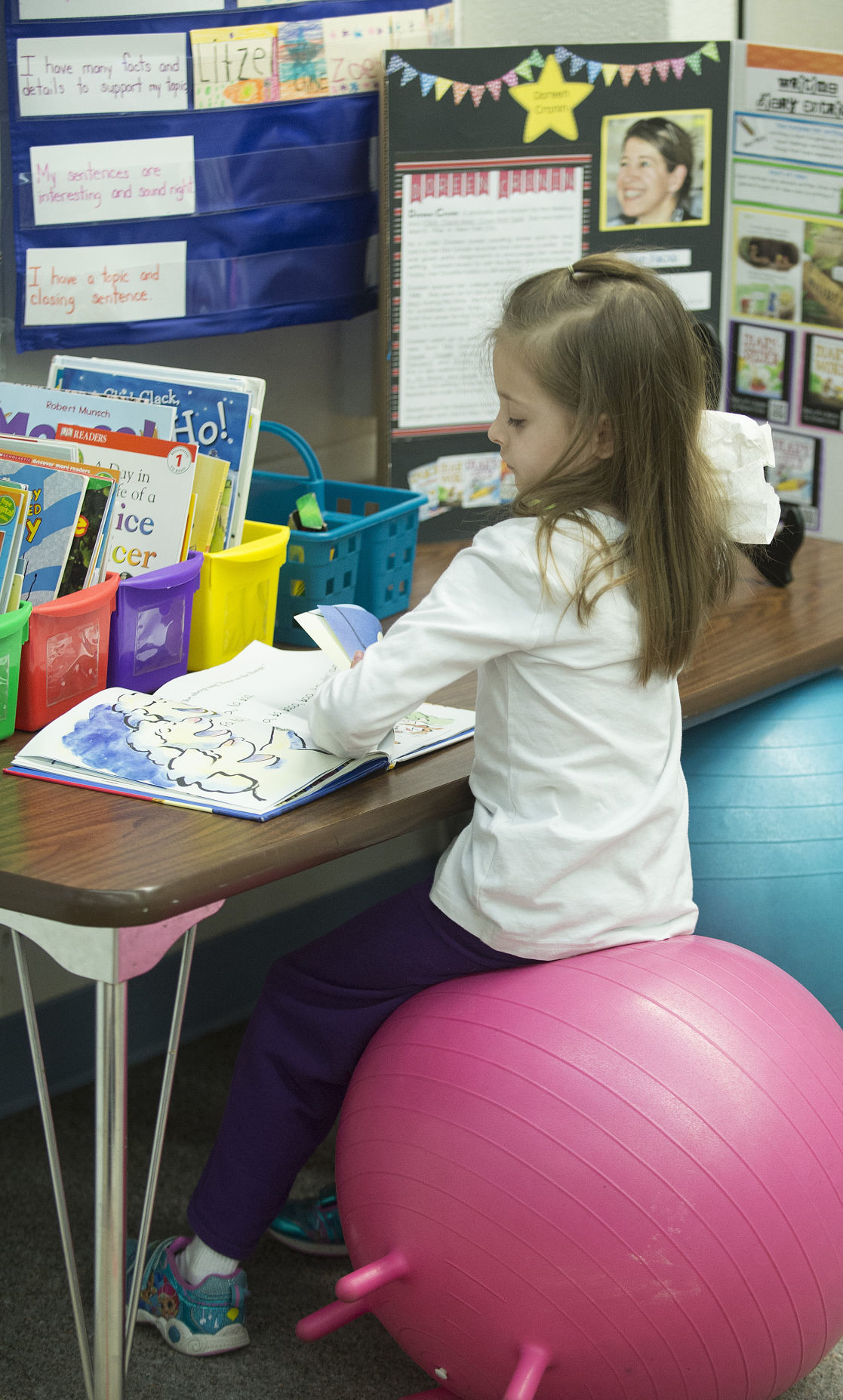 Isabella Fuller sits on a unique seat as she reads a book during a language arts activity. 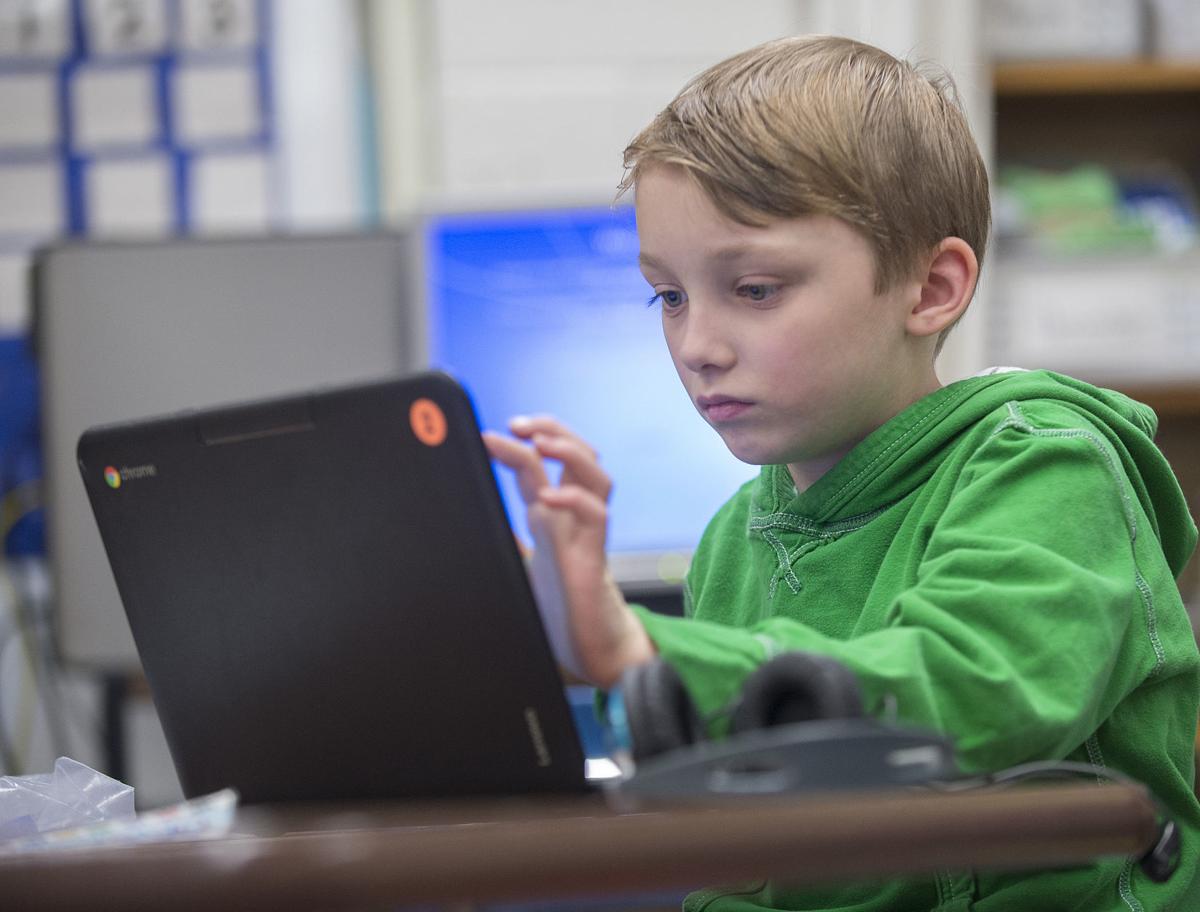 Myersville Elementary School first-grade teacher Michelle Carpenter gives a “high-five” to a student for her work on a reading task.

Remington Adams works on his Chromebook with his teacher, Michelle Carpenter, in her first-grade classroom at Myersville Elementary School.

Zoey Grimm uses headphones on a Chromebook as she works on a language arts project as other first-grade students do a variety of styles of language arts learning.

Isabella Fuller sits on a unique seat as she reads a book during a language arts activity.

This is an occasional series where The Frederick News-Post will spend time in local classrooms to look at how students learn and approach 21st-century education.

Grace Longo sits in the corner of her Myersville Elementary School classroom in front of a large blue canvas with her ear near the speaker of her Chromebook.

Grace clicks the play button on the computer, and it reads a word to her.

The computer reads the word “over.” Grace takes plastic letters and spells out the word on the blue canvas. When she spells the word, she takes a picture with the Chromebook that her teacher, Michelle Carpenter, will check later.

“Sometimes it can be hard to hear the word, but I like using the letters to spell it out and then seeing if I get them right,” Grace said.

This is just one of the activities students in Carpenter’s first-grade class get to do during their reading rotations period of the day. Carpenter welcomed The Frederick News-Post into her classroom to show how students are using blended learning to help them learn to read.

The class is broken up into three groups — a guided reading group, technology-based activities and library activities. Reading rotations are a popular tactic for teachers to use at the elementary level because it allows them to spend more time individually with each student. It also aims to allow a student to work on what he or she feels needs improvement.

Carpenter sits at the reading table as a small group of students read a specific story. A student comes to a word that she doesn’t quite know, and Carpenter pulls out a dry-erase board and writes the word down.

“What do you notice about this word?” Carpenter asks the student. The word has two vowels next to each other and ends in a “y.”

“When two vowels go walking,” Carpenter said, using a well-known reading tip that teaches kids that the first vowel “does the talking,” meaning that the second is silent. Carpenter then asks what sound the “y” could make at the end, and encourages the student to sound it out.

“F-air-ee,” the student responds, determining the word is “fairy.”

“That’s right,” Carpenter said. “I love the way you used decoding strategies to figure out what that word is. Great job. Now, let’s keep reading.”

The small reading group is working on identifying character traits, and using context from the book to prove those traits. In this story, the main character just lost his tooth while eating an apple at school, and several students said the student was sad to lose his tooth. They had to skim the book and find phrases that indicated the child was sad.

Remington Adams, who was wearing a red suit with a matching bow tie and shoes to celebrate his birthday this particular week, sits at a table nearby with the book “Click, Clack, Moo, I Love You,” beside him. In the book, the main character, a duck, throws a Valentine’s Day party.

Remington is setting up his Chromebook to do a book review and tell his classmates what he thought of the book.

“I like the rotations because I get to work on what I’m not as good at yet,” Remington said.

Technology is also used in the classroom to help students learn to spell and read words. Jessie Fauble also uses creativity and his aptitude for art while learning the words.

While using one of the programs that requires students to determine what an object is and then spell it out using a consonant, vowel, consonant structure, Jessie comes across a cup.

Working with an aide, Jessie determines what the object is, but the illustration is missing something. He takes the “pen” tool on the computer program and selects the color brown and starts filling in the inside of the cup.

“It’s tea,” he tells the aide before going on to spell out the word.

The next photo is of a dog that is somewhere between a puppy and an adult. Jessie is hesitant to write the word.

Jessie insists it’s a pup and types out the word.

After a set of rotations, Grace is standing at the front of the class near the promethean — an interactive white board. Students at the promethean are given a slideshow filled with different words with the alphabet below the word on each slide.

“It’s really fun to try to get through all of the slides,” Grace said. “But sometimes the board messes up and drags a bunch of letters at once that you don’t want.”

If you teach in Frederick County and would like to have a News-Post reporter visit your classroom, email Allen Etzler at aetzler@newspost.com. Include the name of the school and the class you would like us to consider visiting.

Moderator is special kind of stupid

It is my understanding from friends and coworkers that Myersville Elementary is one of the top elementary schools in the FCPS system, if not the best. This article does not surprise me.

According to the fcps.org website, it consistently has high standardized test scores. Very little teacher turnover. No outdoor portables. And I understand the kids are well behaved and many of the parents are extremely active. Good to see the western part of the county doing well...imagine owning a house in that area...would probably be valued nicely!

We don't need or want any more people over this way.

You didn't mention the active volcano, mudslides, and bears.

And the huge radon problem.

In all seriousness, more people = higher taxes and a lower quality of life -- including kids being taught in portables/trailers.

4. Catch a ballgame a Nymeo Stadium