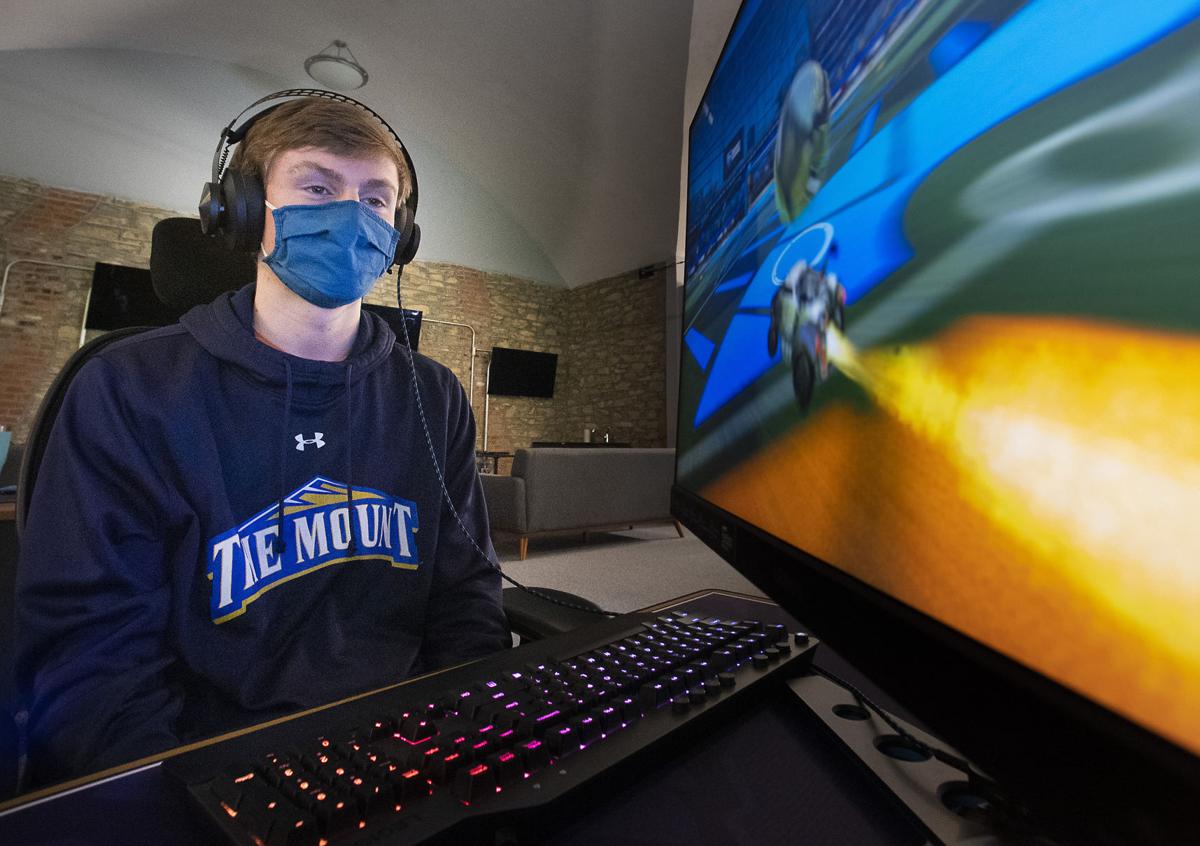 Adam MacLeod, a freshman at Mount St. Mary’s, said esports for him is all about escapism. MacLeod was a starting player on the university’s Rocket League Team this year. 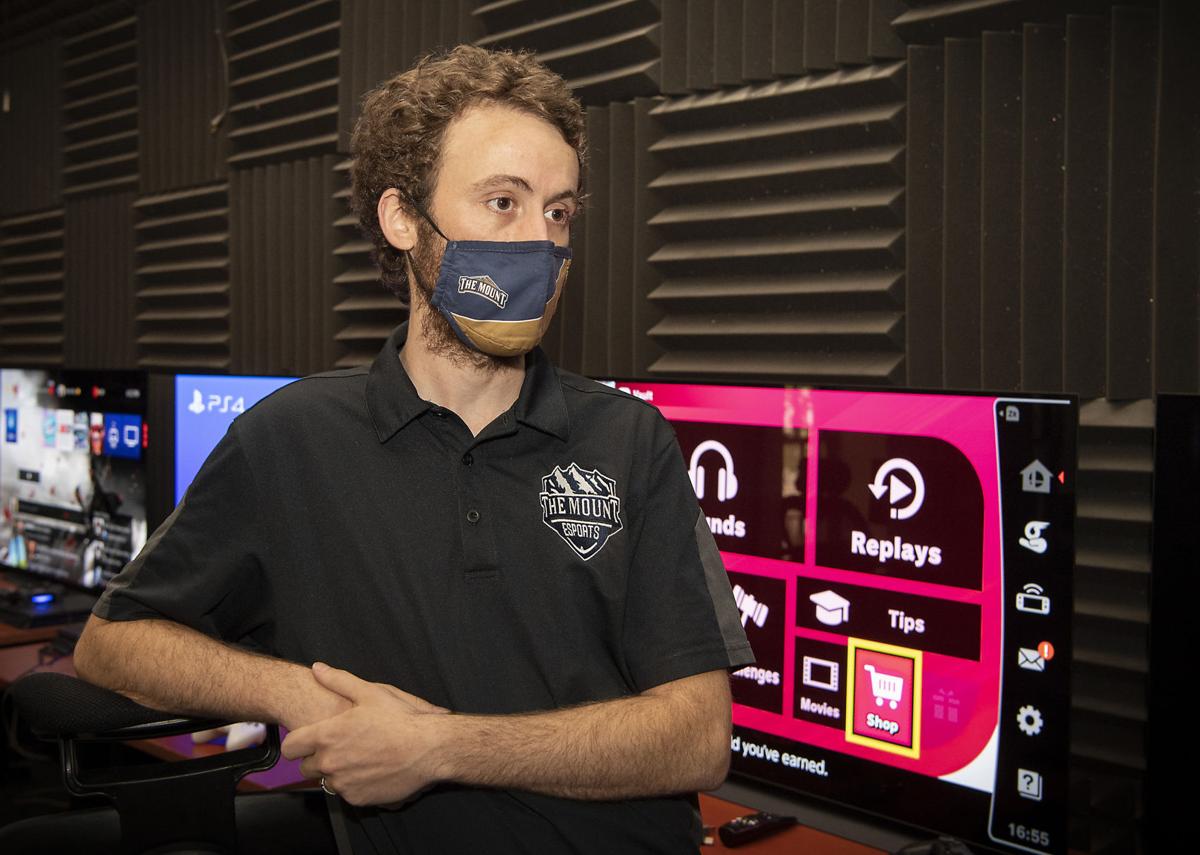 Mount St. Mary’s University launched its esports initiative at the start of the 2020-2021 school year. Russ Hamer, director of the program, was charged with bringing the culture of esports to campus in a holistic way and building an academic curriculum around it. 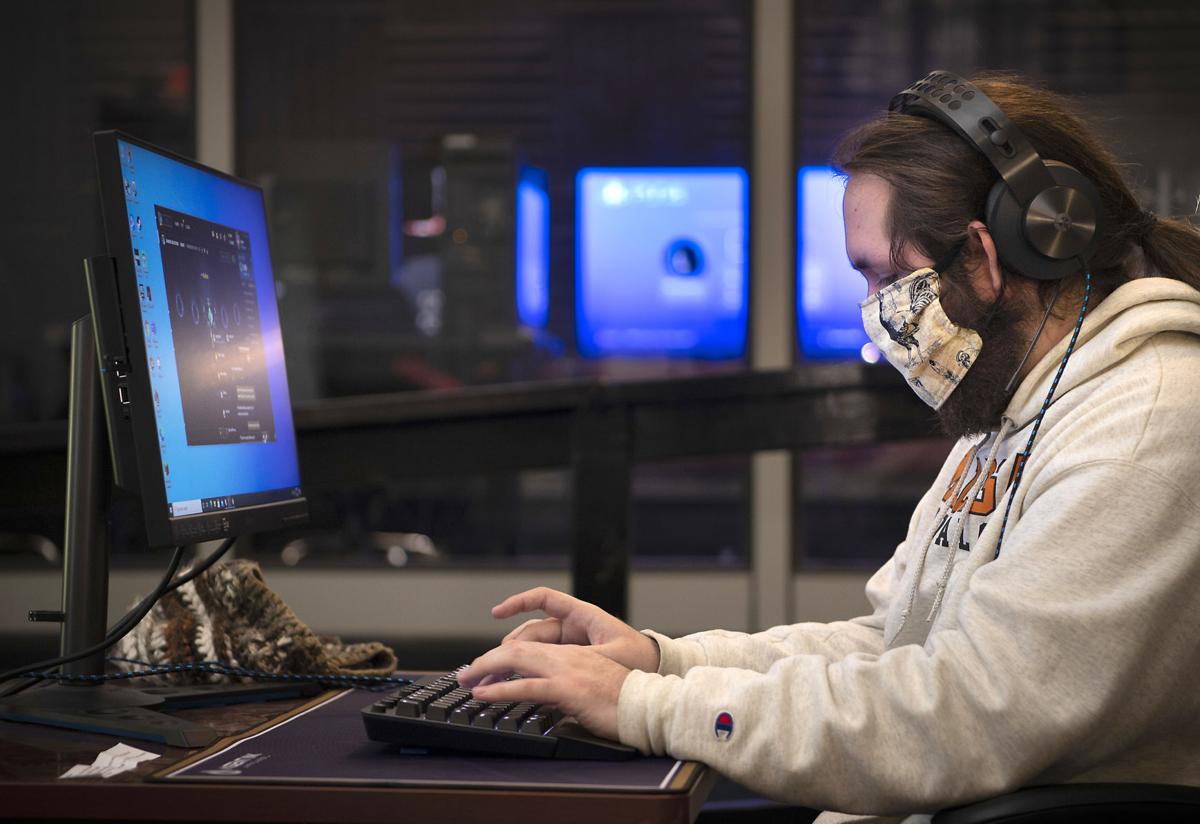 Adam MacLeod, a freshman at Mount St. Mary’s, said esports for him is all about escapism. MacLeod was a starting player on the university’s Rocket League Team this year.

Mount St. Mary’s University launched its esports initiative at the start of the 2020-2021 school year. Russ Hamer, director of the program, was charged with bringing the culture of esports to campus in a holistic way and building an academic curriculum around it.

As Mount St. Mary’s University grappled with a global pandemic and spent weeks on end planning for students to return to campus last fall, a new program was quietly gaining traction.

That program, it turns out, is perfectly suited for the new socially distanced, virtual world.

In a building at the back of the hilly Emmitsburg campus, in-the-know students gather to play video games, or esports, a term that has come to represent a billion-dollar industry.

The Mount launched its esports initiative at the start of the 2020-2021 school year. Russ Hamer, director of the program, was charged with bringing the culture of esports to campus in a holistic way and building an academic curriculum around it.

Esports is more than Madden NFL or NBA Live, Hamer says, and he wants to bring it all to the Mount.

The term esports can be a bit nebulous, as the industry’s most popular games aren’t traditional sports video games at all. Instead, the highest-grossing and viewed games include League of Legends, Overwatch and Fortnight.

Hamer described these games as online battle arenas with multiple players. There are often stated objectives to complete, players are in teams, and there can even be a multi-layered story arch.

There are amateur and professional esports leagues where players as young as 18 are recruited, contracted and sponsored by major companies. Professional teams often practice for up to 12 hours a day and compete in tournaments in large stadiums. Winnings can amount to tens of millions of dollars.

Most professional esports players age out of the industry by the time they reach 25, said Hamer. That stat comes down to physical abilities and mental fortitude. Hamer said research suggests hand-eye coordination in humans begins to fall off around the age of 25. Sight too begins to decline, and even the smallest amount of drop-off can impact a player’s game.

But why has the industry boomed the way it has in recent years? Accessibility, Hamer says.

“If I’m a big NFL fan,” he noted, “outside of paying insane amounts of money for NFL Sunday tickets and a bunch of different services that will give me the ability to watch games consistently, I’m basically only on Sundays and Monday nights watching football. I don’t have a ton of opportunities to be a viewer. With esports, I can watch everything all the time.”

Esports has exploded in the past five years, with viewership and revenue increasing almost every quarter. According to NewZoo, in 2020, esports had a worldwide audience of 495 million people. Additionally, there were $623.9 million in sponsorship investments made into esports in 2020. The industry is expected to generate a revenue of $1.5 billion by 2023.

“Part of the reason I applied for [the director position] is because the Mount has this interest in making sure that our students graduate, not just with having learned a bunch of stuff but as sort of transformed individuals, ethical people who can do good in the world,” he said.

Hamer has a background in philosophy and has run esports programs at other universities.

Almost a year after its launch, the program is still in its infancy. Hamer coaches five esports teams made up of students who try out, and he teaches classes that analyze the cultural and societal phenomenon of video games and things like game mechanics and player behavior.

The Mount’s Sports Management Department will soon launch a class related to esports, and there is talk of an English class that will look at video game narratives.

The minor will officially launch in the fall, though classes are already being run.

To illustrate the venue’s popularity, Hamer logged on to Twitch — the No. 1 streaming service for esports — and found a European Rocket League tournament going on with an audience of 58,000 people.

The National Association of Collegiate eSports (NACE) formed in 2016 and currently has more than 160 member schools. While the Mount is not a member, it is one of many universities nationwide launching esports instruction.

According to NACE, gaming is the largest area of interest for males and females between the ages of 10 and 20. In 2019, NACE-registered schools gave out approximately $15 million in gaming scholarships.

For Alexander Allen, a junior at the Mount, the esports program was one of the main reasons he transferred. Prior to attending the Mount, he was enrolled at a community college in Pennsylvania.

Allen was known within the amateur esports scene and was contacted by Hamer who asked if he wanted to come to Emmitsburg and join the program. For the past few months, Allen has been a member of the university’s League of Legends team.

He’s thrilled esports is becoming more mainstream across campuses and beyond.

“ ... it’s super fun. It’s a good way to engage students that might not be engaged otherwise, and it’s another thing for colleges to compete in, which is really cool,” he said.

His love for gaming comes from the fact that you don’t have to be genetically gifted to excel at esports.

“If you’re playing football, and say you’re six-foot-three and 200 pounds, that’s kind of an unfair advantage. But in gaming, the only thing that you’re really rewarded for is practice, which I find really interesting,” Allen said. “Competition is, entirely what you put in is what you get out.”

Adam MacLeod, a freshman at the Mount, said esports for him is all about escapism.

“I think it’s a good way for students to just relax and spend time with their friends playing games ... ,” MacLeod said. “I like how different it is from real life and how you can express your personality in the way you play.”

MacLeod was a starting player on the university’s Rocket League Team this year. He only found out about the program after coming to campus.

Getting the word out to students about esports offerings when everyone is fairly isolated has been challenging, Hamer said. But he is hoping to get more faculty versed in the program, which should help spread the word among students.

Hamer also plans to begin more recruitment and host summer camps for middle and high school students. These will give young players the chance to learn from college coaches and will hopefully end up being a long-term recruitment tool.

The program isn’t all about recruiting players for the teams, though. It’s also forming into a campus community.

“I have players who are in here constantly who don’t want to play at a varsity level, but they just want to be a part of the community, hang out, play games, watch the varsity teams play,” Hamer said.

The pitch to parents

Hamer is aware that esports can carry a negative connotation, especially with parents who are worried about their kids spending all day playing video games.

With the new program, Hamer is hoping to show that gaming can be done responsibly. He also wants to use the activity to help students develop soft skills. Varsity players attend seminars, hosted by Hamer, on topics like how to receive criticism and how to be good leaders.

“Your kid is not going to stop playing these games, so they can either be a part of my program and use games to improve themselves, or they play them alone at home,” Hamer said. “If students are going to be playing these games as recreation anyways, we might as well put it to good use and use it as avenues for growth.”

And physical exercise isn’t out of the equation. Hamer requires his varsity players to be physically active because, as he said, a healthy body leads to a healthy mind.

Overall, Hamer wants to help create a healthy gaming culture and help students balance their love for gaming with their other responsibilities.

The only part I don’t understand is everything that comes after the letter e.

And this will help prepare you for a career in.....?

Only the sports I care about matter.

Is this what they call "higher education" now days?

Is there a degree? What is it?

We used to call this wasting time playing video games.

“‘I have players who are in here constantly who don’t want to play at a varsity level, but they just want to be a part of the community, hang out, play games, watch the varsity teams play,’ Hamer said.”