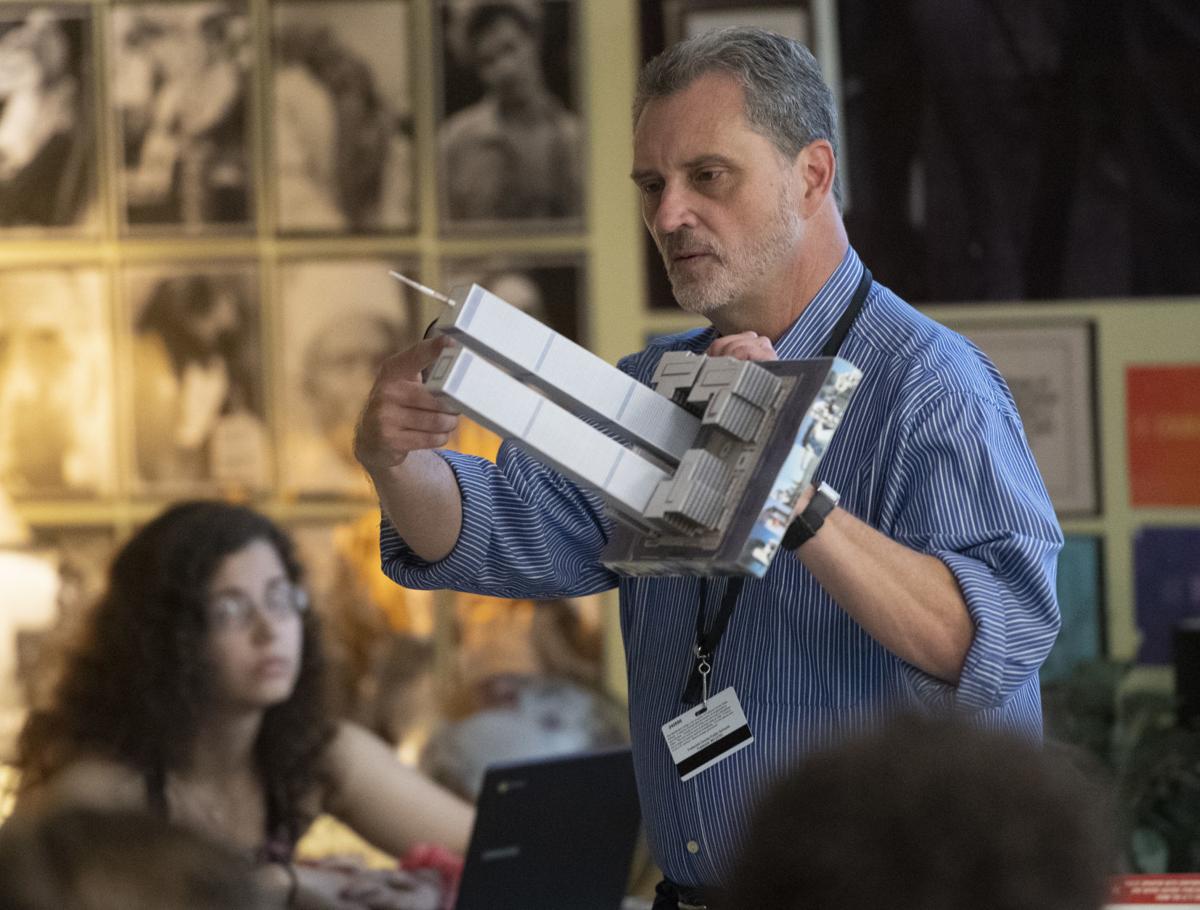 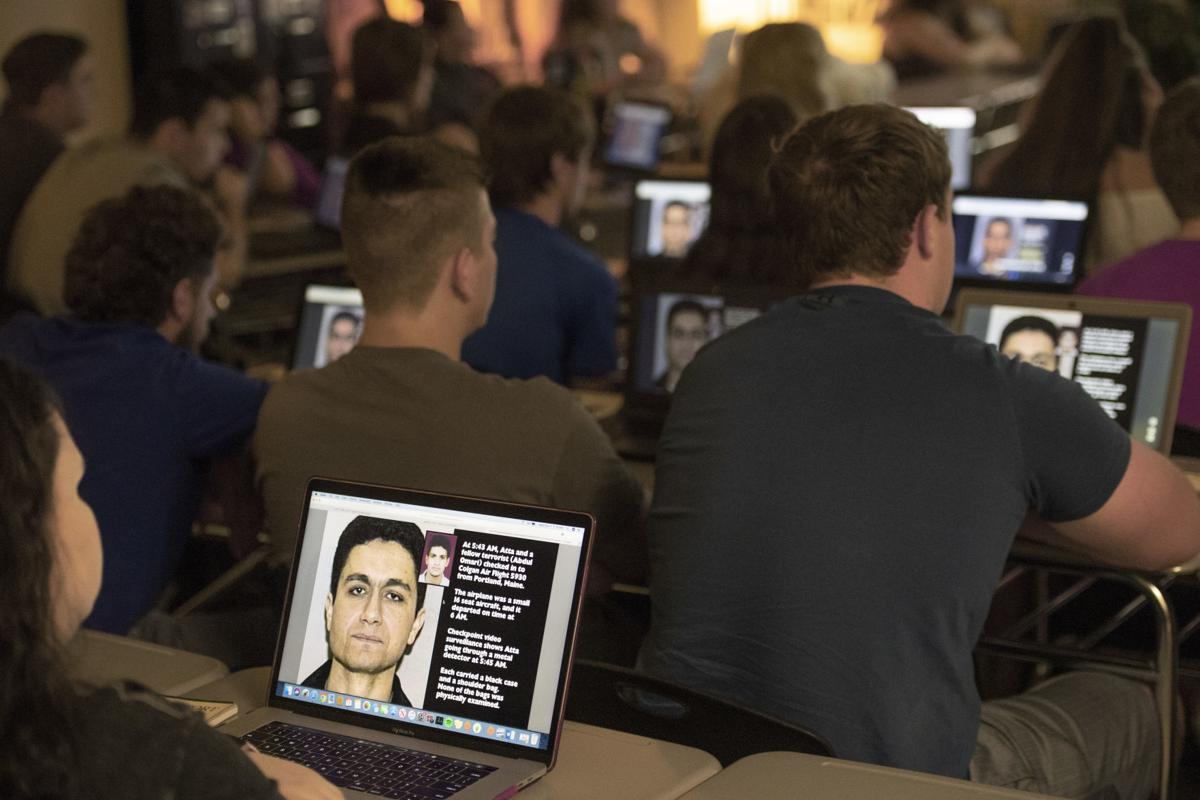 Linganore High School students follow along with a lesson on how the attacks of 9/11 unfolded in class Wednesday morning. 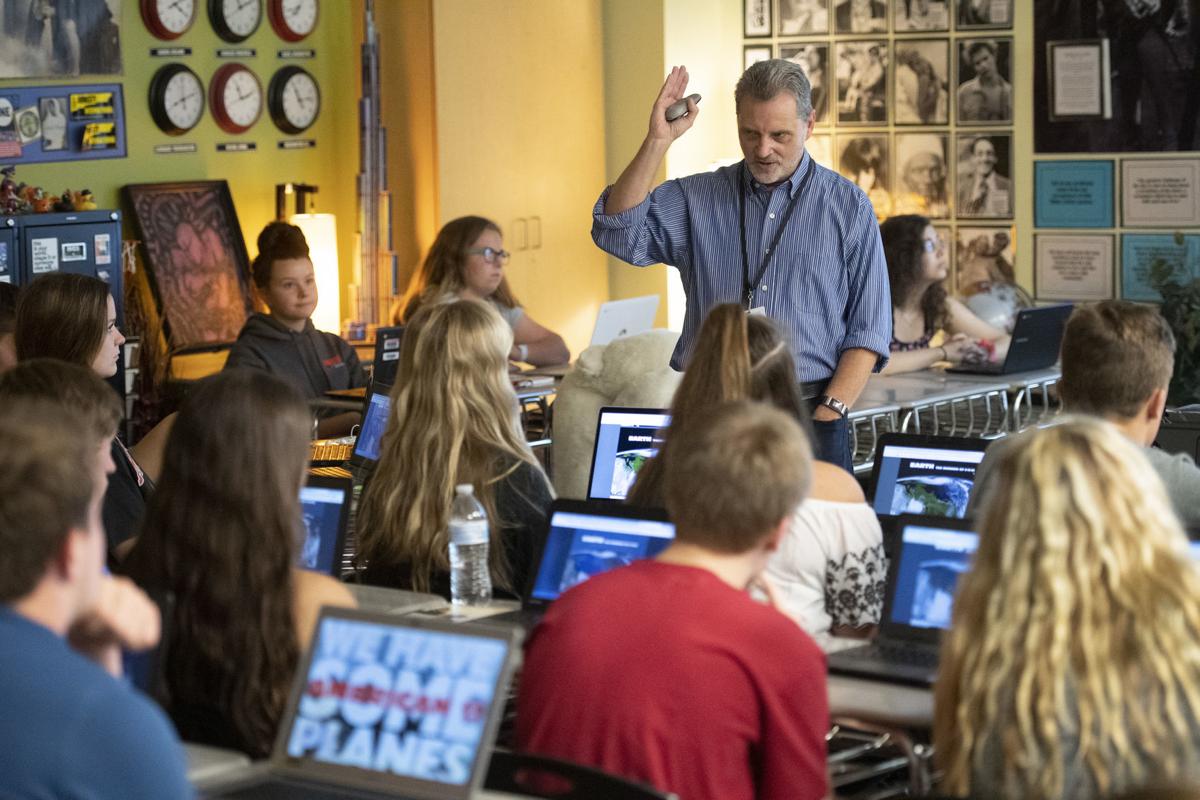 Linganore High School students follow along with a lesson on how the attacks of 9/11 unfolded in class Wednesday morning.

Dillon Drenner, Elizabeth Anderson and Kayla Curran were not yet born on Sept. 11, 2001, but they have a level of knowledge about the horrific day that may surpass those of many who were alive at the time.

The Linganore High School seniors are three of about 300 students who have completed the course “9-11 to Present” since it began at the school four years ago.

For them, the course offers a chance to dive in and learn details about a day that lives only in their imaginations.

“My parents always talked about it a lot when I was a kid. I always heard stuff about it,” Drenner said in class Wednesday. “I would see it on the news all the time and I thought maybe I could learn a little bit more about it by taking this class ... and I learned more than I could imagine.”

All three say the course changed their perspective on both the events of that day and global issues in general, and helped them understand the full impact of the attacks.

"It was definitely shocking to me," Curran said. "Coming into the class, I didn't think it was as bad as everyone made it seem."

The class is not only an analysis of the day itself but also a broad examination of factors that contributed to the attacks, such as the Russian invasion of Afghanistan in 1979, and how the events of the infamous day have continued to shape contemporary politics and current events.

As the 18th anniversary of 9/11 was marked on Wednesday, the class becomes the first group to be learning about events they were not yet alive to witness.

They have lived exclusively in a post-9/11 world, and what used to be normalities of life such as the ability to walk to airport flight gates without a ticket or the U.S. not in a state of continuous war, are unknown to them and hard to conceptualize.

Drenner said he was “absolutely clueless” about 9/11 before taking the course. Now he corrects people.

“I think everyone kind of knew general background of what happened, but it’s just so complex, the whole entire situation ... now I’ll just ramble on about everything,” Drenner said.

And at the end of this school year, a whole new group of students will become experts on a subject that to them is pure history.

'We have some planes'

Darren Hornbeck has taught the course at Linganore High since its inception.

On Wednesday, he began the class with a warning.

“What we’re looking at today will be graphic in tone,” Hornbeck said. “If you don’t want to participate today, that’s OK.”

He also reminded students that it’s OK to have questions.

“People are sometimes surprised when you ask a question because we remember it so well and we just assume ... but you weren’t alive ... you don’t have an emotional connection, and that’s OK,” Hornbeck said.

The lesson for the anniversary day was called “We Have Some Planes,” a title that is a direct quote from one of the hijackers of United Airlines Flight 11 when he accidentally called air traffic control, and the title of the first section of the 9/11 Commission Report.

Hornbeck relies heavily on the report to teach the course. It was prepared by the 9/11 Commission — an independent, bipartisan commission created by Congress and President George W. Bush to prepare a full and official account of the circumstances surrounding the Sept. 11, 2001, terrorist attacks.

For two 30-minute periods, the class learned what occurred on each flight. They learned the backgrounds of the hijackers, what time the flights left their gates and even how much jet fuel each plane carried, among other details.

At one point in the lesson, Hornbeck held up a 3D model of lower Manhattan with the twin towers to demonstrate how the planes flew in, and the point of impact.

Hornbeck said it’s been both interesting and challenging to see the level of knowledge of every group of students minimize over the years.

“You can never take for granted what they know because it fades year to year,” Hornbeck said.

He said he must also be conscious of the vocabulary or images he uses because something that may be well-known to a person who was alive for 9/11 may be completely unknown or hard to understand for today’s students.

He said it’s important for students to learn this subject, not just because of their lack of knowledge, but because it helps them shape and contextualize current events.

“They should know how the country changed after 9/11 because if they don’t understand that they don’t quite have the ability to decipher current events in an informed way,” he said.

'There is a disconnect'

According to Hornbeck and Colleen Bernard, secondary social studies curriculum specialist for Frederick County Public Schools, the class is one of the most popular electives at Linganore High.

Hornbeck thinks it’s because the day is such a mystery to this generation.

“I think kids do sense that there is a disconnect between them and adults on this issue and I think they’re interested in knowing in great detail,” he said.

For the entire hour, the class was mostly silent, with only one student asking a question.

According to Hornbeck, this is normal.

“Today they’re usually processing and then the questions start to come the next day and the day after,” he said.

Although many students do not have an emotional connection to the day, Drenner, Anderson and Curran all said the class is not an easy one to get through.

“Watching survivors talk about it and watching footage of people ... you see their emotion and that’s where I think you really connect ... and it’s heart-wrenching,” Anderson said.

Curran agreed, and said she felt very connected to the families who lost loved ones, since she has lost her own father.

“There was a little boy who was talking about how he was getting ready to go to his dad’s funeral. ... I’ve been there,” Curran said. “I walked out of this classroom multiple times in tears.”

For Drenner, it was the story of one plane that affected him the most.

“Flight 93. That really got to me,” Drenner said. "The fact that if nothing was done in that situation with that plane, and if those heroic passengers didn’t take over ... so many things could have happened. We just don’t know.”

At the end of the lesson on Wednesday, Hornbeck sat on a stool in the front of the classroom and gave the students a few seconds to take everything in and breathe.

“It was a terrible day,” Hornbeck said in a choked voice, the emotional drain of teaching the class on the anniversary clearly getting to him. “[But] I appreciate your willingness to learn about it.”

The bell rang, and the students went about their day.

Firetrucks and other emergency vehicles lined North Court Street outside City Hall in Frederick on Wednesday morning as city, county and Fort …

I hope that certain facts were brought out about the people who were responsible for the attacks and that it was an act of terrorism. These were people who want to destroy our country.

This article is so well-written I signed up for an account just so I could make this comment. Well done!

I remember while in high school learning about WW2.

2. Check out Frederick’s oldest homes on a historic house tour