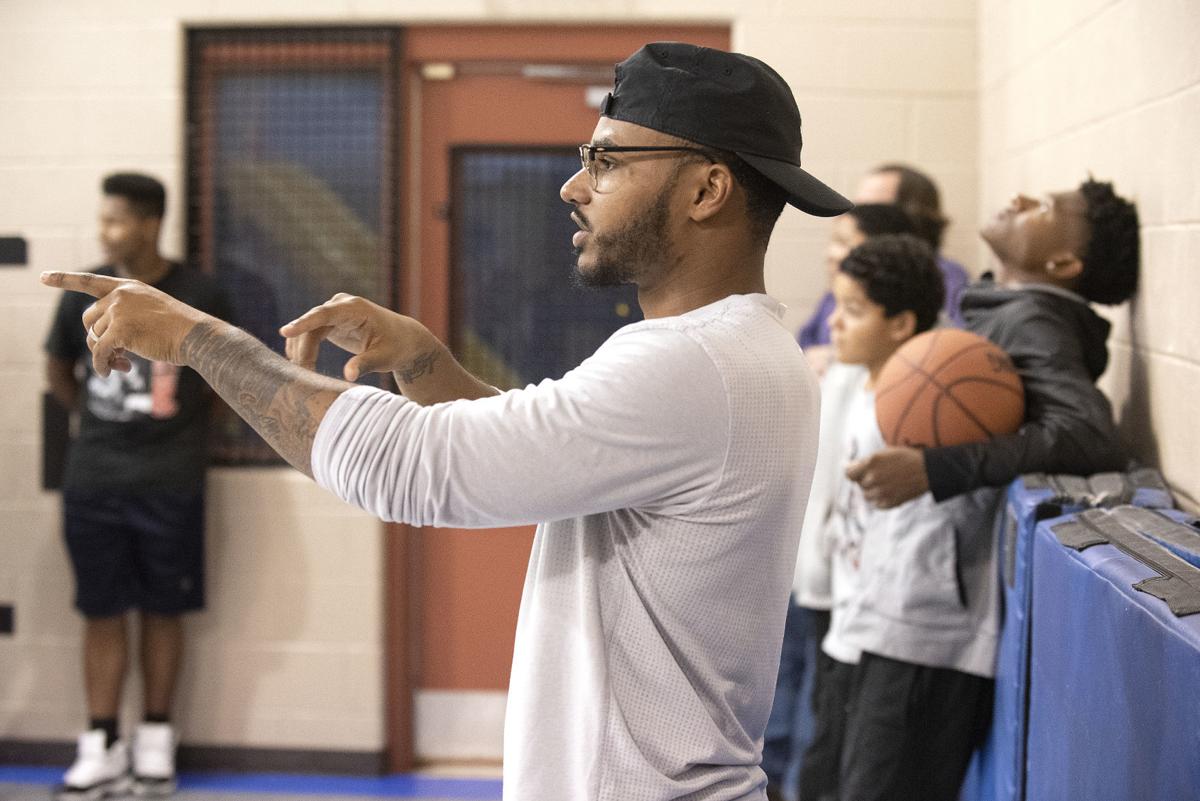 Brandon Chapman, coordinator of the PAL program, leads a group exercise Wednesday where members talk about their accomplishments during the past week. 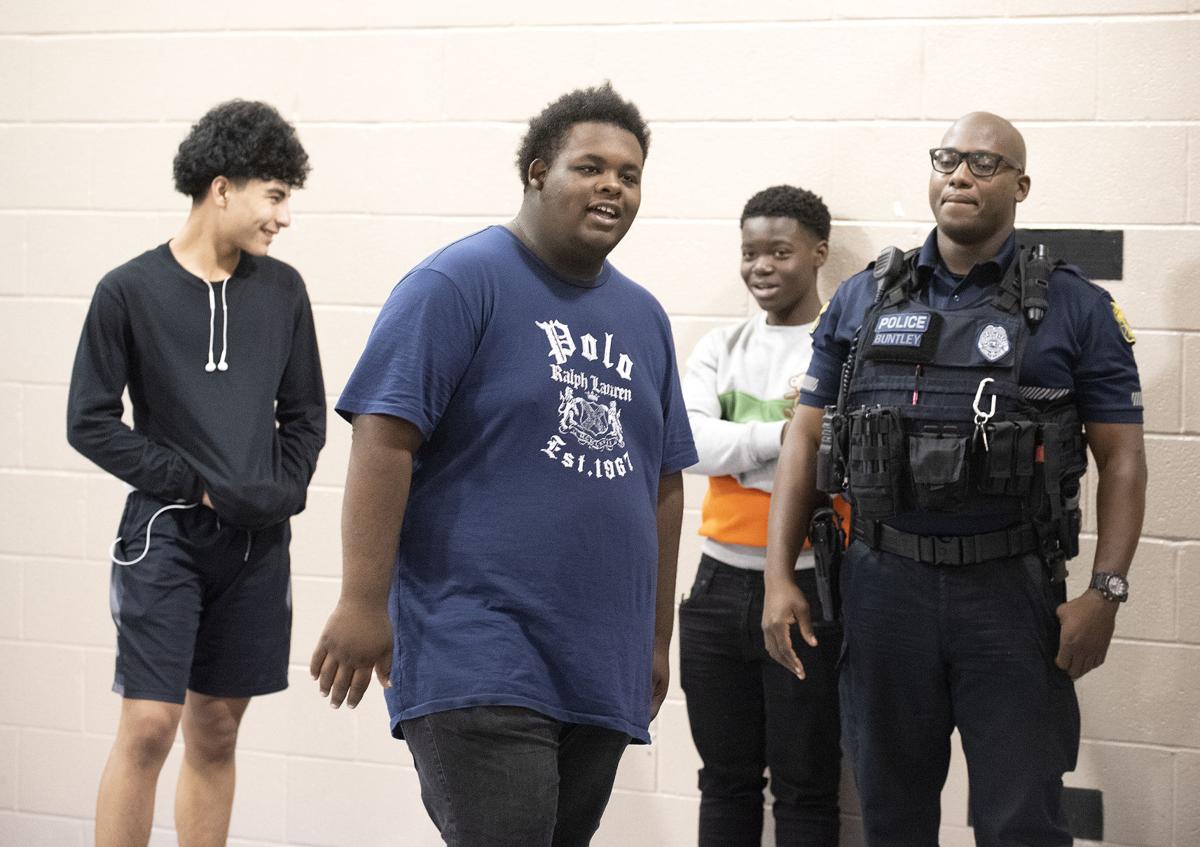 Elijah Goines, center, shares the goals his group, including Oscar Contreras, left, Christ Netmi, and Frederick Police Officer Willie Buntley came up with during the weekly Wednesday meeting of the PAL mentoring program. 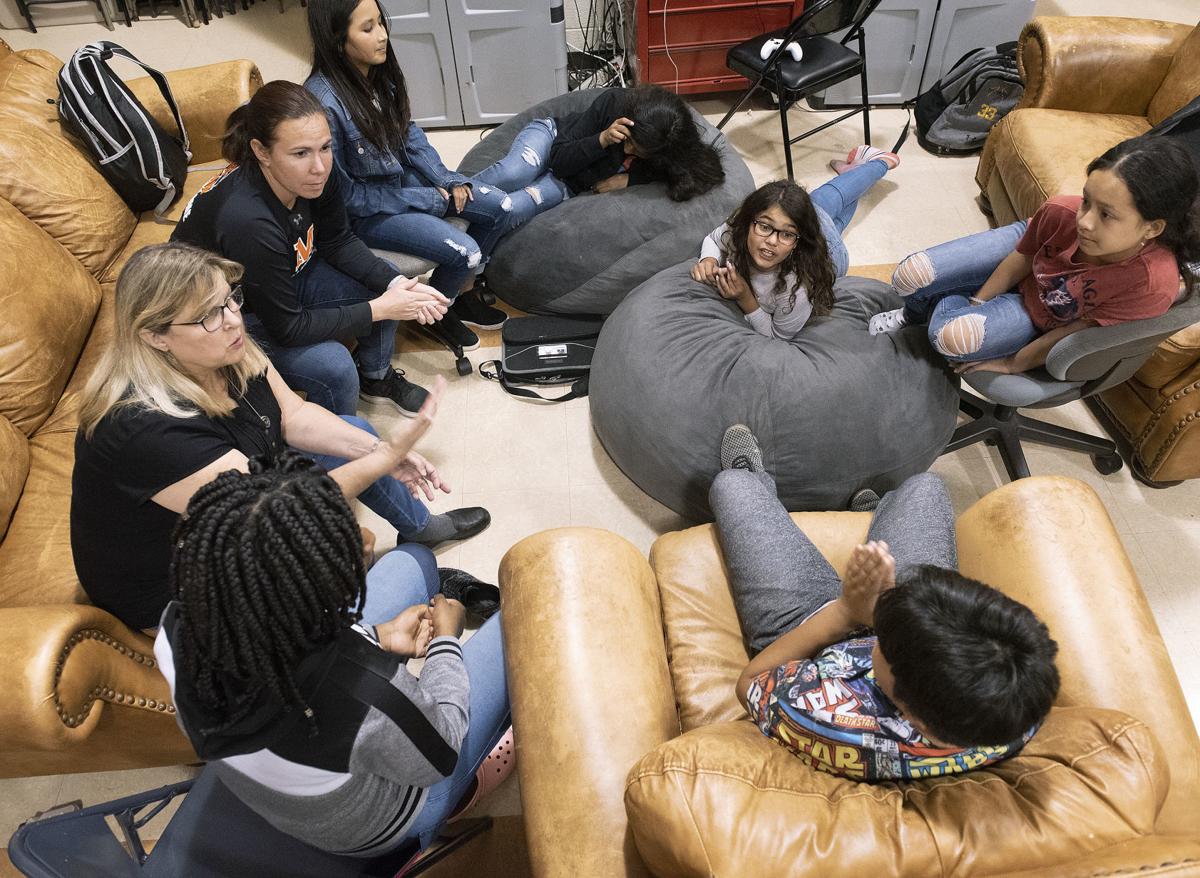 Lynne Stanker, left, helps lead a breakout group where kids come up with two goals at the PAL meeting. 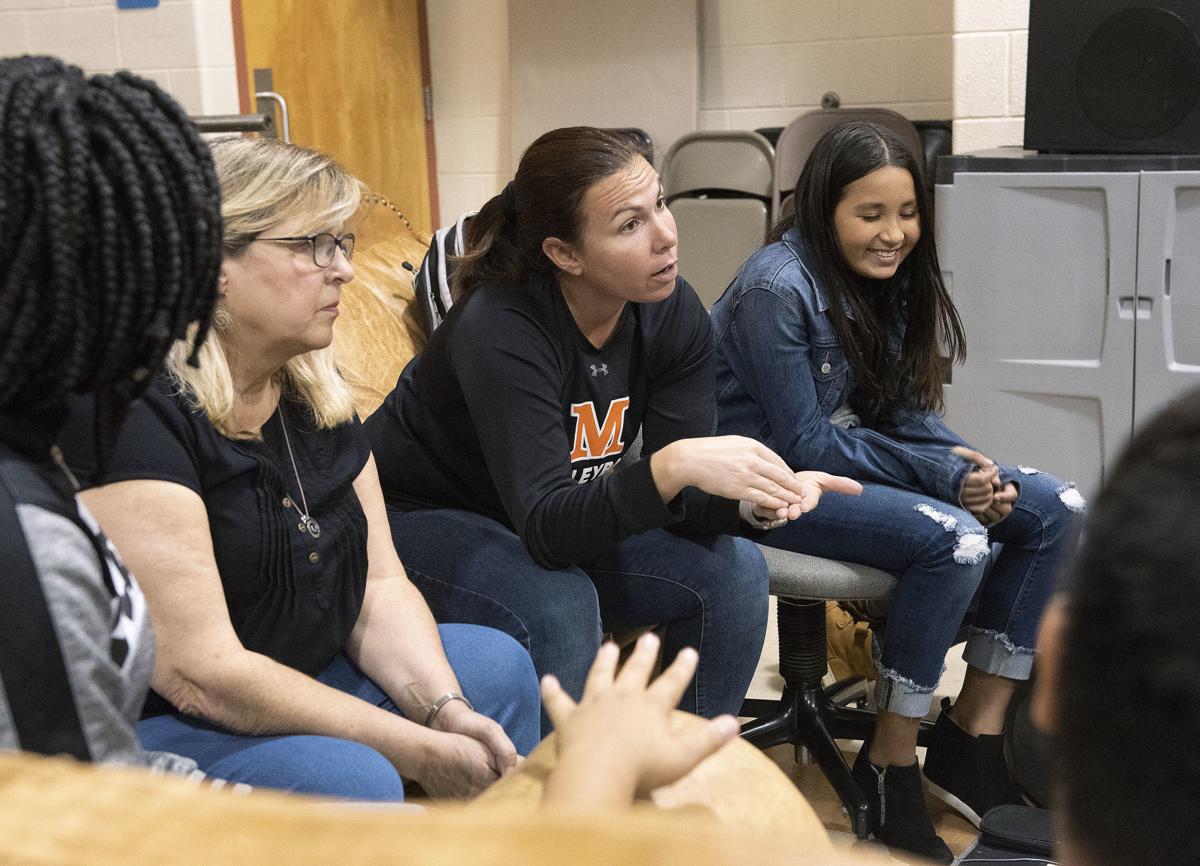 Brandie Couch, center, helps kids come up with two goals during a breakout session of the weekly PAL meeting.

Brandon Chapman, coordinator of the PAL program, leads a group exercise Wednesday where members talk about their accomplishments during the past week.

Elijah Goines, center, shares the goals his group, including Oscar Contreras, left, Christ Netmi, and Frederick Police Officer Willie Buntley came up with during the weekly Wednesday meeting of the PAL mentoring program.

Lynne Stanker, left, helps lead a breakout group where kids come up with two goals at the PAL meeting.

Brandie Couch, center, helps kids come up with two goals during a breakout session of the weekly PAL meeting.

A mentoring program based two blocks from the Frederick Fairgrounds is turning a tragedy that happened there a month ago into a teachable moment.

Brandon Chapman, who leads the group, saw what happened in late September, when a man died after an assault at the annual fair allegedly committed by two Frederick teenagers, and knew it was the appropriate topic to address.

“I have a group of kids in front of me who are talking about an incident. This is a perfect opportunity in a safe environment to voice their concerns and talk about this in a productive way,” Chapman said.

The mentoring program is a partnership between the Housing Authority of the city of Frederick and the Police Activity League (PAL).

The group, which is made up of between 20 to 35 middle and high schoolers, meets every Wednesday evening at the PAL Center to talk about personal goals, struggles and things happening in the community.

“It is a place where kids can feel safe and can have conversations about real-life issues that they’re facing ... whatever the topic may be,” Chapman said.

Mount Airy resident John Weed died after a fight at the fair on Sept. 20, according to authorities. Weed died a day later as a result of his injuries. Two teenage boys have been charged in connection with the attack.

Chapman said many kids in his program know the teens who have been charged.

At the Wednesday night meeting after the assault, Chapman lined the walls of the community center with sticky notes depicting the age of each person involved: 15, 16 and 59.

Chapman asked the kids to take a sticky note and think about everything that someone could have experienced by that age and what the future could hold for that person.

“I talked to them about a 15-year-old and a 16-year-old who could have so much potential to impact this world but may not even be able to get the chance to because of the decision they made,” Chapman said. “Then you have a 59-year-old whose life is lost. ... What does that mean. Did someone lose an uncle, a brother, a dad?”

After the discussion, the group gathered to watch a video of the assault that had surfaced on social media shortly after it happened. Chapman said he pointed out a circle of people who stood and watched Weed being attacked.

“My next question is, what could have happened differently ... if someone did decide to step up ... how could this whole thing be changed? And then it hits them hard,” Chapman said.

The main mission with this lesson, Chapman said, was to put the mentees in each person’s shoes, view the event from different perspectives, and realize that had each person acted differently, lives could have been saved.

Lonelle Skelton, 16, said he knows one of the teens who is charged in the assault. He said the discussion had an effect on him.

“The fact that no one in the circle stopped it ... I would have thought twice before doing something like that,” Skelton said.

Eric Allen, 16, said talking about the assault helped him see both sides of the story.

“I was kind of biased toward the kids I knew, but then, when I saw both sides, it was just like both parts weren’t right in a way,” Allen said.

Chapman, who has been active in helping at-risk kids in the community, said having these conversations in a safe space with trusted adults is critical to youth development.

“It’s important for every community. ... They can come in and we can have an honest conversation,” Chapman said. “I can give them honest feedback from an adult and they can give me honest feedback as a teen. This is an area for them to gain perspective from different views.”

Chapman developed the mentoring program this year with the vision of allowing the mentees to implement the change they want to see in the community.

Using something called the Innovation Curriculum from the national chapter of the Police Activity League, Chapman guides the participants each week through lessons that teach values, critical thinking, responsibility and social-emotional learning.

Chapman said he tries to relate every lesson to real life.

In addition to the lessons and discussions, the kids are encouraged to take responsibility and organize their own events based on the needs they see in their communities.

Allen took that challenge on fully this year and organized a boxing tournament called Guns Down, Gloves Up.

“We have a lot of gun violence here, so in order to simmer that down, just pick up your gloves and put that anger towards that ... [and] at the end of the day everybody was cool,” Allen said.

Chapman is the biggest reason Allen keeps coming back every Wednesday, but the teen also said having a space where you can voice your ideas and put them into action is another pull.

“Not as many kids are as fortunate. For us to be able to decide what we want to do and do it ... it’s a blessing, actually,” Allen said.

Chapman said he hopes the program will continue to be a space where kids can come and see the impact that they can have on their community with the right guidance.

“Having an idea that doesn’t just benefit you, but [other] people,” Chapman said. “It’s about how to create these programs that result in multiple people winning.”

These kids aren’t engaged in the activity. It looks a lot like recess. Perhaps the program where kids visit a prison, and get scared straight. That is a lesson.

Where were the parents of these two individuals. You are a product of your environment. It starts at home. Unfortunate.

I was there and minutes ahead of the incident at the fair. I also wondered why not a single person helped Mr. Weed. Where his family was. Why he ended up standing in a circle of wolves who acted like animals after the final blow. Every single kid in that circle should be criminally punished as they were a part of the murder. Some were filming the murder, some were encouraging it, others were supporting it. I saw a group of black kids running past me after we were informed there had "been a shooting" by a young lady. We were leaving and this group running, I can only imagine, was the same group that killed Mr. Weed. No one else was running (yet) but them. The fair mishandled this and are at fault for knowing there needed to be crowd control and chose not to. What a difference that would have made.

sad that all the law and order types shirk away when the rubber meets the road. blah blah, blah is all they can muster. #sad.

Do you EVER have something good to say?

John Weed died after a fight at the fair? What fight? A fight is between two or more people and it's my understanding he never got physical. Never had the chance even had he wanted to.

As if the students really care. They've heard the same bullsheet a dozen times or more. The best teaching and mentoring would come from televising the frying of the thugs in the electric chair. And doing so quickly, before all these mentorees turn 60.

I can tell by picture group really engaged with speaker. How about a teachable moment by putting the two thugs in prison for 30 years