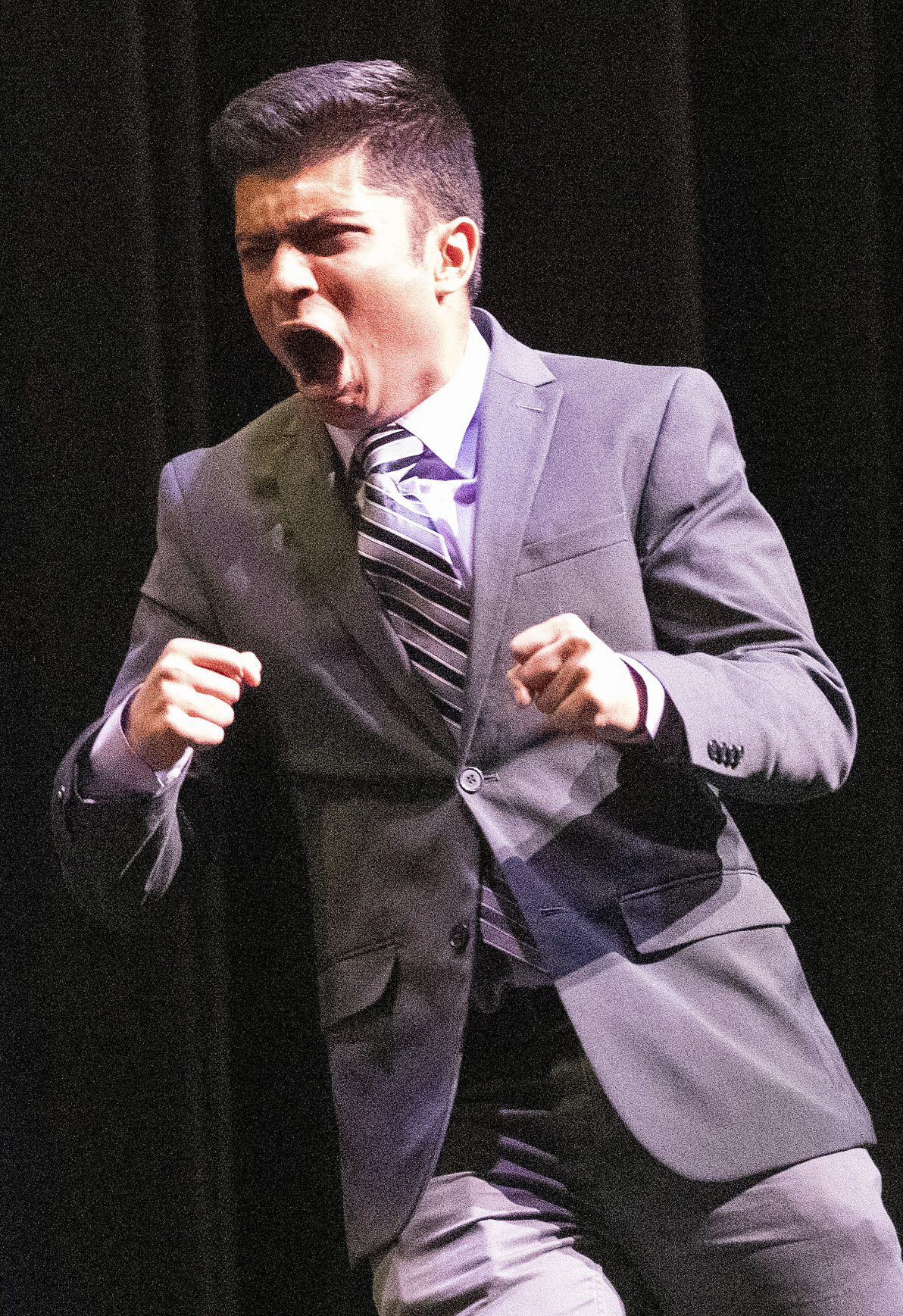 Walkersville High School’s Milan Patel reacts seconds after he and his teammates answered the final question of the night to win the 2020 Frederick County Academic Tournament on Friday night at Frederick High School. 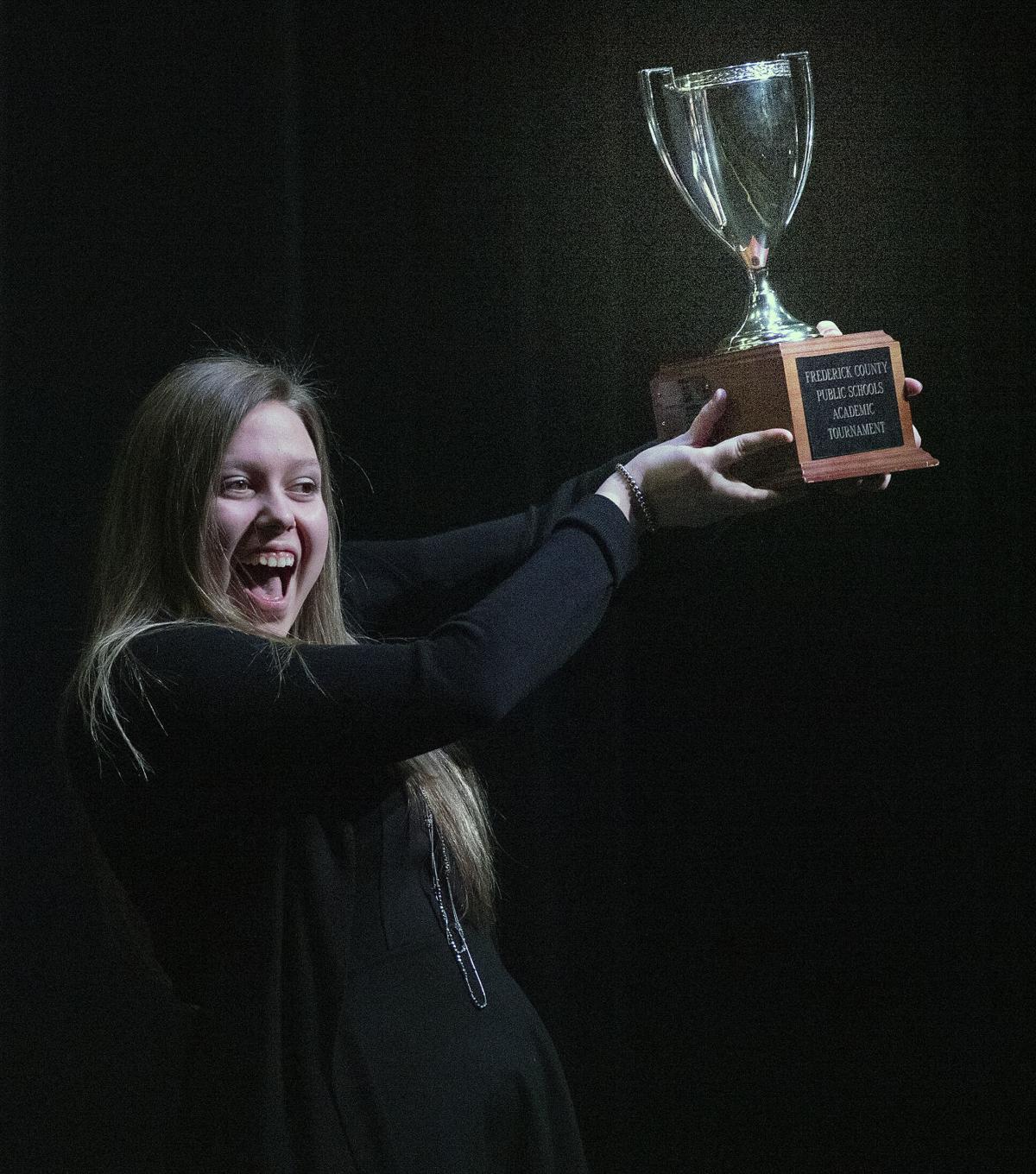 Walkersville High School’s Milan Patel reacts seconds after he and his teammates answered the final question of the night to win the 2020 Frederick County Academic Tournament on Friday night at Frederick High School.

There is a new champion of the Frederick County Public Schools Academic Tournament.

Walkersville High won the tournament Friday night after a nail-biting final round.

It came down to the final question about a famous building, and the Walkersville team was tied with Brunswick High School’s squad. Answering the question correctly gave them one point and the final win.

Two seniors on the Walkersville team worked together to give the winning answer. Evan Pinetti rang the buzzer and Milan Patel gave the answer.

“I didn’t even know the score at that time,” Patel said. “After everyone started cheering, that’s when we knew we won. … It’s the greatest feeling in the world.”

Ethan Coleman, a senior on the Walkersville team, added that the win is even sweeter because Brunswick beat Walkersville in last year’s tournament.

“We got to play again in the finals this year and it came down to a last-second buzz,” Coleman said. “The teams we played, they’re just great competition and it’s great to come out victorious against teams like that.”

The team came back after a disappointing first round, which left them with negative two points.

“Just to bounce back to keep fighting, that has been our mentality all year,” Patel said. “We didn’t let ourselves get corralled inside and we just kept fighting, and that’s the way we like to play.”

Urbana High School was the third competitor in the final match. The final score was Walkersville High with 15 points, Brunswick High with 14 points and Urbana High with 13 points.

The three teams competed earlier in the evening against other high school teams in the county to secure their place in the final round.

The tournament came after a long seven-week season that determined the order in which teams played Friday’s preliminary matches.

Eric Reickel served as the moderator for the season. He has served as moderator of the FCPS academic tournaments for the past three years and was also a coach for three different academic teams for 20 years.

“It is thrilling to be the moderator for Frederick County,” Reickel said in an email. “Our kids are taught by great teachers, and when you see the level of knowledge, and the speed with which they answer these questions, you can’t help but be impressed.”

The speed is indeed impressive with many teams buzzing in after Reickel reads the first three words of a question.

Reickel along with a colleague write all 2,000 questions for the entire season.

Om the finals tournament, they ranged from questions about the 1920s to current television shows.

A few questions even referenced recent articles in The Frederick News-Post.

When asked if he ever tries to really stump the competitors with a question, Reickel said “never.”

“It’s a bad question if no one rings in. I want the students to do well,” Reickel said.

Patel said the 1920s category was the hardest round of each match and gave a shoutout to fellow team member Reuben Puthumana for carrying a wealth of knowledge about the time period and pulling the team through.

“Without him, I don’t think this would have been possible,” Patel said.

In between some tough math, science and historical questions, though, there were a few moments of humor. Teams seemed to have the mission of having the funniest messages of thanks during the introductions before each round.

One team thanked actor Bill Murray, another thanked a picture of an orangutan that they held up, but the best seemed to be from Tuscarora High School.

“We’d like to thank the grubs from Lion King for being slimy yet satisfying,” one competitor said, referencing a famous line from the film.

Now that Walkersville High has won, the team’s sights are set on the It’s Academic television program, which will pit Walkersville against other high schools in the state. Patel and his teammates are hoping for another win.

Besides winning, though, Patel said the tournament allows students to meet and drive one another forward academically.

“It shows that nerds can be big-time people, too,” Patel said.

The final question from theFrederick County Public Schools Academic Tournament: This is widely considered one of the most beautiful buildings in the world. It was built to honor the favorite wife of an emperor… Name this mausoleum on the brink of the Yamuna River. The correct answer is: Taj Majal.

With one question to go, it was Brunswick 14, Urbana 13, and Walkersville 14. There could have been a three-way tie! Very exciting ending. All of the teams should be proud.

Dang, those Walkersville kids are SMART!! They make the home crowd PROUD!!