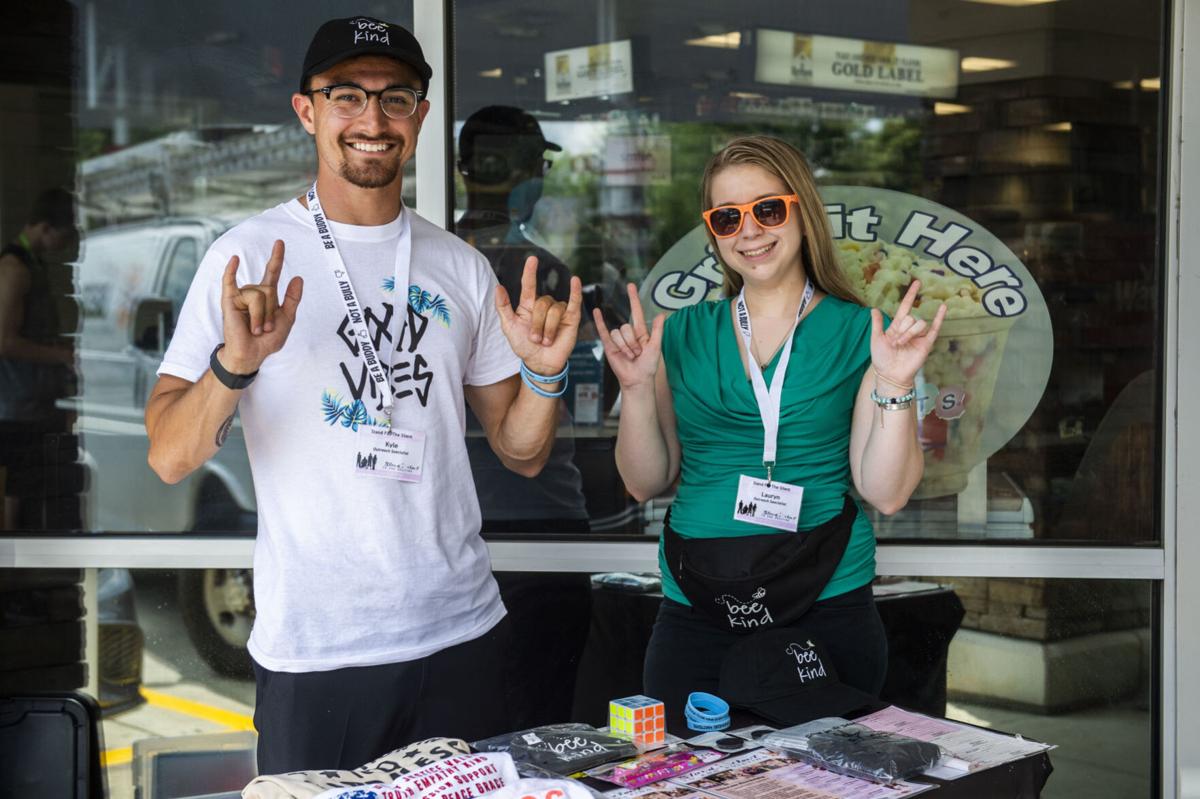 Outreach specialists for Maryland’s chapter of Stand for the Silent Kyle Rudman (left) and Lauryn Beam stand outside of the Wawa on Ballenger Creek Pike on Tuesday. The anti-bullying organization started over a decade ago and is currently raising money for mental health programs. 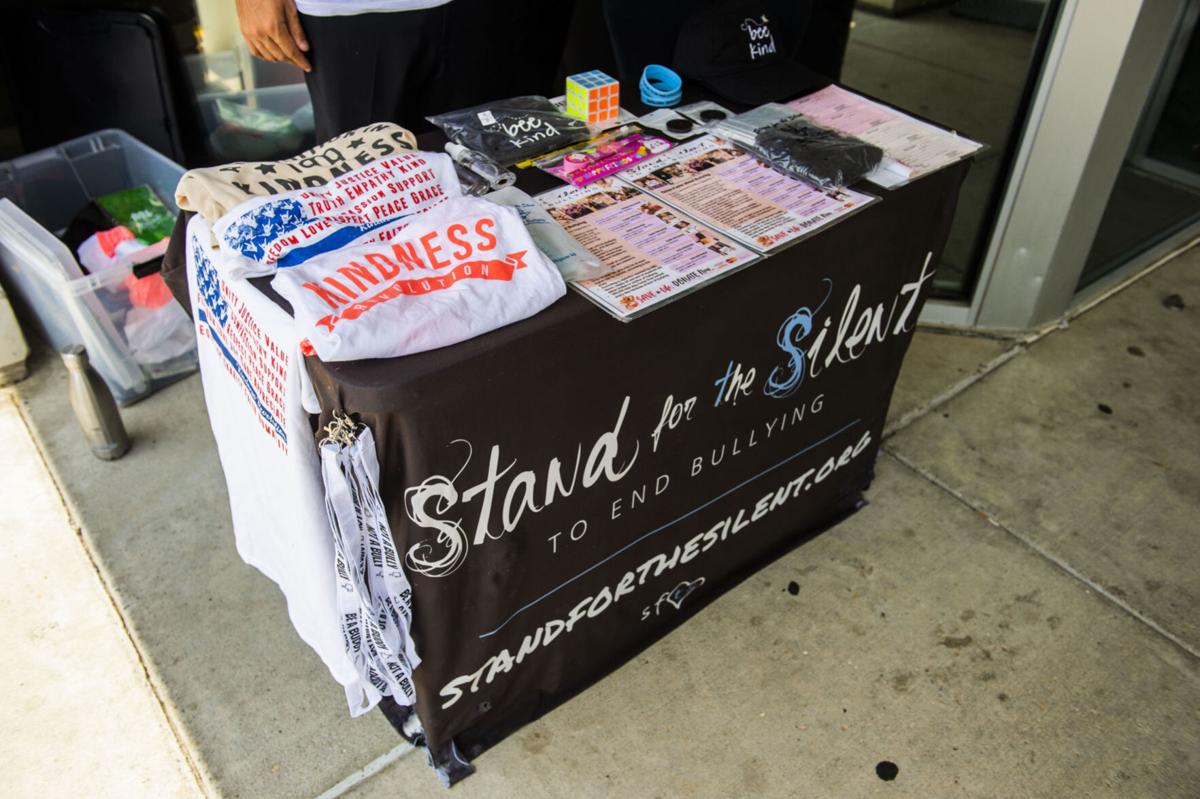 Stand for the Silent products are displayed on a table outside of the Wawa on Ballenger Creek Pike on Tuesday. The anti-bullying organization started over a decade ago and is currently raising money for mental health programs.

Outreach specialists for Maryland’s chapter of Stand for the Silent Kyle Rudman (left) and Lauryn Beam stand outside of the Wawa on Ballenger Creek Pike on Tuesday. The anti-bullying organization started over a decade ago and is currently raising money for mental health programs.

Stand for the Silent products are displayed on a table outside of the Wawa on Ballenger Creek Pike on Tuesday. The anti-bullying organization started over a decade ago and is currently raising money for mental health programs.

Humidity hung thick in the air Tuesday afternoon outside of the Wawa on Ballenger Creek Pike as people rushed from their cars to the cool sanctuary the gas station provided, dabbing moisture from their sweaty brows.

But the soupy weather didn’t dampen the enthusiasm of Kyle Rudman and Lauryn Beam, outreach specialists for Maryland’s chapter of Stand for the Silent, who were stationed outside of the shop for several hours Tuesday. Posted behind a table blanketed with promotional material for the anti-bullying organization, the duo alternated between cheerfully complimenting the outfits of passersby and encouraging them to take a moment to chat before driving away.

“Stop by to hear about how you can help the kids in your community!” Beam, 24, called out.

Since a group of high school students started Stand for the Silent in Oklahoma City more than a decade ago, the organization has reached 1.62 million kids in nearly 1,600 schools, according to its website. The group has been in Maryland since 2018, Rudman said, and is currently working to raise money to bring its 10-week emotional learning programs to Frederick County Public Schools. During these programs, kids learn to deal with mental health issues, such as anxiety, depression and suicidal thoughts — all issues that can arise after someone is bullied — and learn how to reach out for help if they’re struggling.

Historically, Rudman said, talking about mental health is something that has been stigmatized and pushed to the side — “You know, like, ‘Just shake it off, rub some dirt in it,’” the 25-year-old said.

But that approach won’t cut it anymore, he said. Suicide is the second-leading cause of death among kids ages 15-19 and, according to a report released last year by the U.S. Centers for Disease Control and Prevention, it’s becoming more common. Moreover, experts fear the isolation and stress brought on by the pandemic exacerbated mental health issues experienced by young people.

“That’s really why we do what we do to improve that and give that safety net for kids,” Rudman, who grew up in Anne Arundel County, said. “To let them know that it’s OK to reach out.”

The cause is personal for Rudman and Beam. Both say they struggled with mental health issues while they were attending high school in the state.

Although Beam, who grew up in Baltimore County, said she was supported by “amazing guidance counselors” throughout her education, she noted that programs like the one hosted by Stand for the Silent bolster the work of mental health professionals in schools and help tamp down on the stigma of asking for help.

Soon, Beam will have yet another reason to work toward ensuring that young people don’t have to deal with the same sorts of struggles she did when she was growing up.

“I’m about to be a first-time aunt, and my older sister is bringing a baby into the world,” she said, beaming. “I can’t have my niece or nephew go through the same thing — I want there to be something for them.”

Stand for the Silent will have a booth stationed outside of the Ballenger Creek Pike Wawa the next couple days. After that, the organization will continue shuffling around shops around central Maryland; you might spot them at a local Lowe’s or Royal Farms. You can learn more about how to support the group at standforthesilent.org.

What is the significance of the hand gestures shown in the first photo?

I had several bullies in high school. I stopped one by beating him to the floor with a metal folding chair, which was near by to grab. I would suggest this remedy any time.

We have several bullies in the FNP comments as well.

I don't see anything horrible in Frederick, but there is so much 'anti-bullying' to do in other Maryland counties.

Montgomery County teachers are forced to analyze "White Supremacy Characteristics" in the Classroom. They are teaching that Christopher Columbus is evil, & if you choose to celebrate him, you are also EVIL.

Conservative, rural, Calvert County, MD has decided to start using "social justice" + "anti-racism" (aka anti-white hatred) incl "inequitable practices and outcomes" (take every student as far down as possible, so all students are 'equally' inept., a la Baltimore City, which is graduating every student who flunked out.)

Anti-bullying groups: you have your work cut out for you--esp since the bullying is being mandated by the teacher's unions.