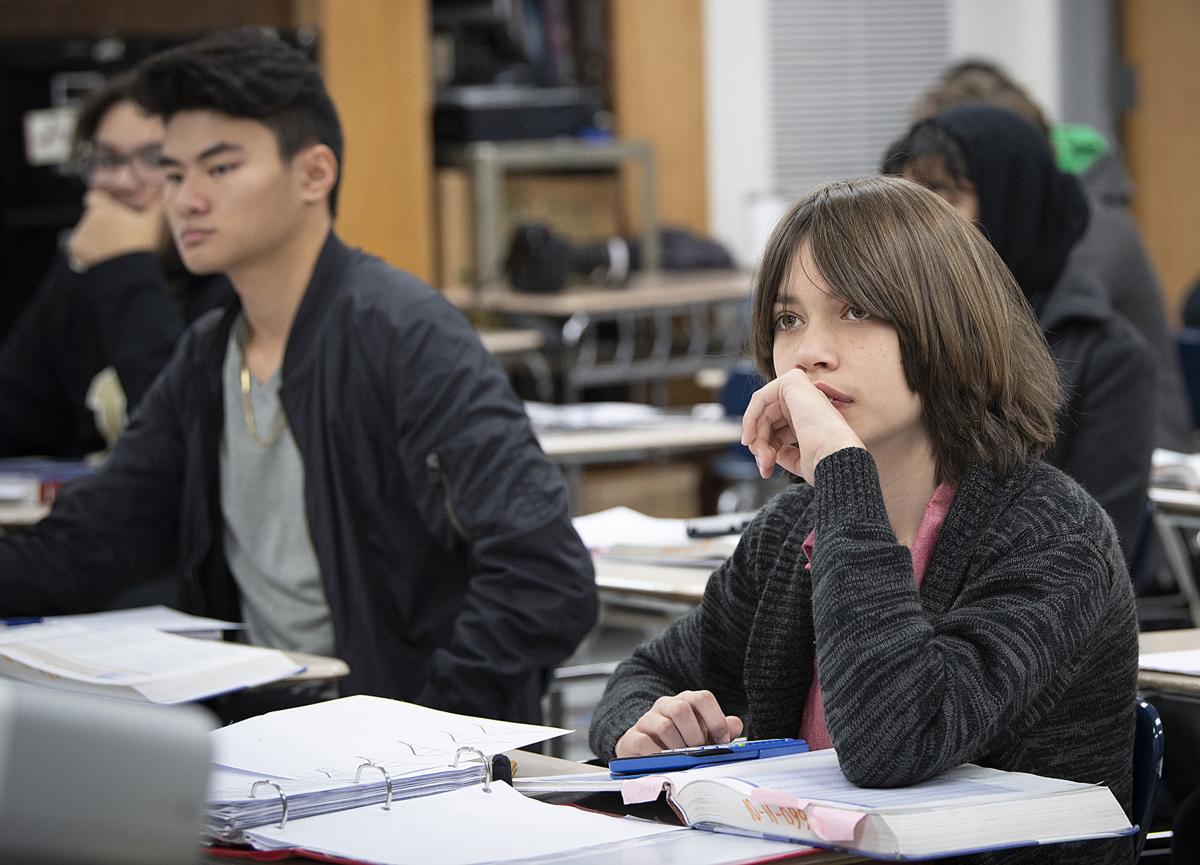 Elliot Anderson, 13, right, sits in an honors-level probability and statistics high school class at Gov. Thomas Johnson High School last week. He was recently named one of the “brightest students in the world” by Johns Hopkins. He is an eighth-grade student at Monocacy Valley Montessori School in Frederick. 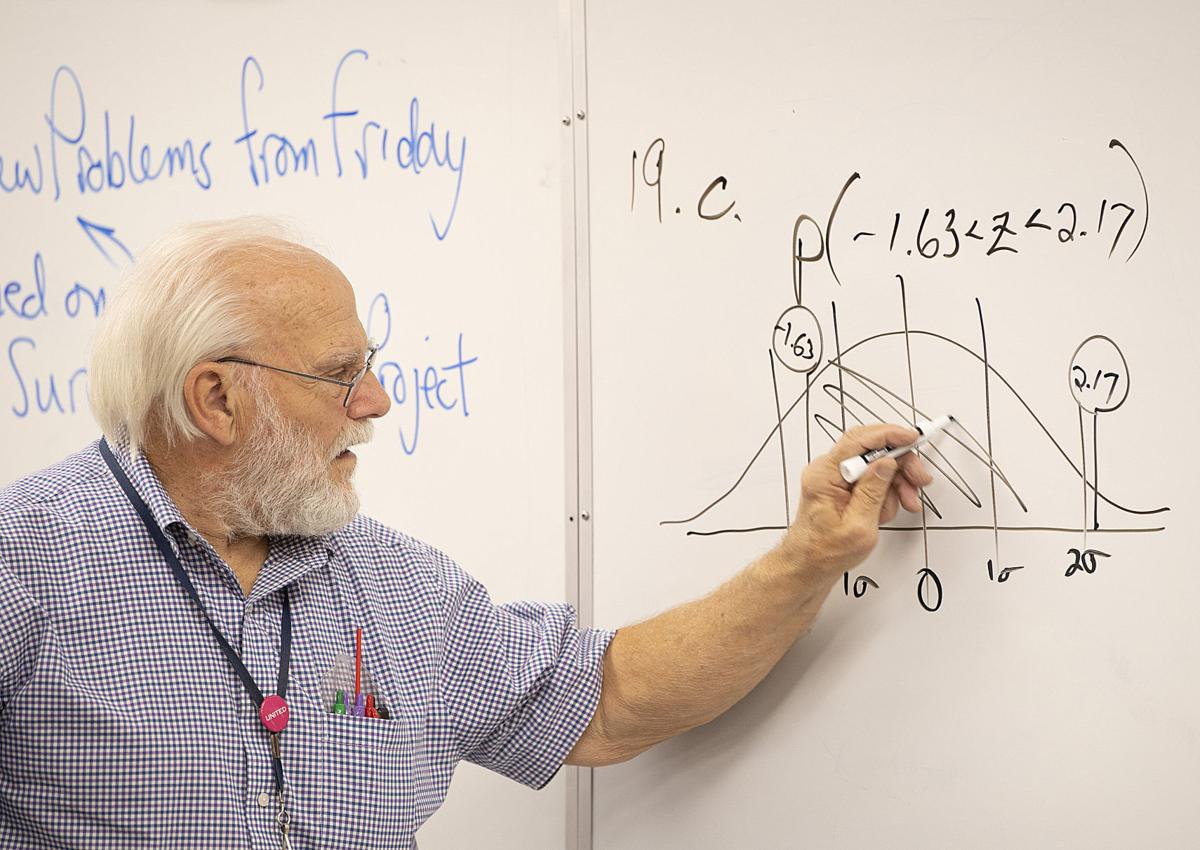 Elliot Anderson, 13, responds to a question as he sits in an honors-level probability and statistics high school class at Gov. Thomas Johnson High School last week.

Elliot Anderson, 13, right, sits in an honors-level probability and statistics high school class at Gov. Thomas Johnson High School last week. He was recently named one of the “brightest students in the world” by Johns Hopkins. He is an eighth-grade student at Monocacy Valley Montessori School in Frederick.

Elliot Anderson, 13, responds to a question as he sits in an honors-level probability and statistics high school class at Gov. Thomas Johnson High School last week.

Elliot Anderson walks into the classroom and takes his seat in the front row. He pulls out his books and his binder and waits patiently for the bell to ring as he observes the other high school students slowly filing into the first-period math class.

The other students slump into their seats and scroll through their phones — the drudgery of high school on a Monday morning weighing on them.

It doesn’t weigh on Elliot though. The 13-year-old whiz kid eighth-grader is wide awake while his peers, some of whom are four or five years older than him, struggle to stay awake.

He’s awake not only because math is one of his favorite subjects, but also because this high school class — honors-level probability and statistics — is one of the few times a day Elliot truly feels academically challenged.

And for someone recently named one of the “brightest students in the world” by Johns Hopkins, being academically challenged is not something that comes often.

Jennifer Anderson always knew her son was unique. He completed 500-piece puzzles at age 2, and soon after could recite all the U.S. state capitals by memory.

“I just ignored it thinking it was normal but then when he started to take tests and score in the 99th percentile we realized there was something more,” she said.

As a second and third-grader at Monocacy Valley Montessori Public Charter School — where Elliot has attended since Kindergarten — he was given math problems that the fifth-graders were working on.

As a fourth-grader, he took seventh grade accelerated math and was inducted into the John Hopkins Center for Talented Youth (CTY).

The school spoke with Anderson about letting Elliot skip a few grades, but Anderson decided to keep him with his friends and let him be a child.

It didn’t last long, though. In seventh grade, when Elliot had already begun taking math classes at TJ High, Anderson found out that Elliot had the option to take the SAT through Johns Hopkins.

If a student under the age of 13 scored higher than a 700 on either the math or critical reading sections, they would be formally invited into John Hopkins’ Study for Exceptional Talent (SET).

“I’ve always strived to let him be a kid and not pressure him in any way,” she said. “I didn’t tell him he had the option to take the SAT and then he found out.”

And Elliot wanted to take the test.

“I thought it would be fun,” he said. “I like doing these kinds of things.”

In May, as a 12-year-old, Elliot sat down for the three-hour-long test that is most often taken by high schoolers and most commonly used to determine college readiness.

He ended up scoring a 700 on the math section and a 1300 overall which placed him in the 91st percentile worldwide. Soon afterward Elliot was formally invited into the SET and named “one of the brightest students in the world.” Elliot and his family celebrated the recognition at a ceremony on Johns Hopkins campus in mid-November.

According to Johns Hopkins, Elliot is one of 380 students worldwide under the age of 13 who qualified this year for the SET. He is also one of more than 2,100 students in grades 2-8 in the world who were identified by CTY’s Talent Search.

Now that Elliot is formally part of the study for exceptional talent, counselors and other resources will be available to him until he graduates high school to make sure he excels, Anderson said.

“Despite all my attempts to let him be a kid, we learned that he needed to be challenged in order to be happy,” Anderson said. “I think he might have been the only person in the world to leave the SATs so happy.”

Cindy Estep, a middle school math teacher at Monocacy Valley Montessori, was one of the first to see true potential in Elliot.

She taught Elliot in fifth and sixth grade — a period during which he mastered Algebra 1. She knew she would soon run out of concepts to teach him.

“He was always asking the next question, the outside the box question and the question that was leading him to making connections that were already kind of sitting there in his mind,” Estep said. “When Elliot would ask a question, you knew ... that it was going somewhere further than his classmates.”

The 25-year veteran teacher said the best part of teaching such a gifted student was giving him a problem, sitting back, and watching the cogs turn.

“There’s no requirement to re-teach, it’s just to give him the next piece of information that he needs,” Estep said.

Anderson was nervous but eventually agreed, knowing it was best for her son and in seventh grade Elliot began splitting his mornings between two schools. In his first year at TJ High, he completed both Algebra 2 and Geometry with an A grade average.

Thomas Brown, Elliot’s current probability and statistics teacher said teaching the 13-year-old is one of the bright spots in his day.

“He’s very hungry for knowledge,” Brown said. “I plan on hearing great things from Elliot in the future.”

Anderson always knew Elliot was special but both her and Estep feel the Montessori curriculum, which involves smaller classes, more one-on-one attention, and student-led education, helped him beyond measure.

“The Montessori curriculum was amazing for him because they are allowed to work ahead,” Anderson said. “They work at their pace. It’s child-led, child-centered.”

Estep, who has worked in both Montessori and traditional schools, agreed and said the environment of a Montessori school lends itself to student success.

“Due to the hands-on activities and materials that are naturally in the Montessori classroom, it definitely has the potential of allowing students to excel,” Estep said.

Next year, Elliot will be leaving his home school and entering TJ High full-time as a freshman. He’s not nervous, he said, because he already knows his way around, and he has ambitions – like starting a Science Olympiad or Academic Debate team.

The middle-schooler eventually wants to have a career in microbiology, epidemiology or genetics and is already talking about his options for college and whether he wants to take a Dual Enrollment path. If he takes one match course per semester, Elliot will have completed all math classes available at the high school level by his sophomore year, Anderson said.

“We need to figure out what we’re going to do. ... I never thought we’d be doing this, this soon,” Anderson said.

Besides being an incredibly gifted student, in other ways Elliot is just like any other 13–year-old. His favorite book series is Harry Potter, he plays the piano, and his most pressing issue is how and when to watch the new HBO television series “Dark Materials” which was adapted from another of his favorite books.

The significance of his acceptance into the SET hasn’t triggered much of an ego boost, and he’s still only acutely aware of his place in the world.

“It’s just one award that I’m not even sure I would be aware of if I lived farther away,” Elliot said. “It makes me feel good about myself but I’m not sure that I like the publicity.”

His humility is one of Elliot’s most admirable qualities, Estep said.

“Elliot does not have an air about him at all. I don’t think he sees himself above his peers and I think that’s a characteristic that is just amazing to see in a kid of that age,” Estep said.

She can’t wait to see where her former student goes and is most interested to see if he will ever truly be challenged.

“I’m kind of curious to see at what point he finds he has to pull out some incredible grit because his ability to absorb and apply his mathematics is just delightful to see,” she said.

Teachers all agree that Elliot is a special student, but Anderson never needed standardized confirmation to see his gifts.

“To me it’s silly that somebody’s saying that because of a test,” Anderson said. “I think I’ve always known that he’s one of the brightest kids in the world since the day he was born.”

What a remarkable young man.

Why does the story include only two minor quotes from the kid? If he's so smart, surely he would have thoughts beyond those quoted. Does he follow political news? What does he think about climate change? Where in the world would he like to travel? Instead of a deeper view of this kid's mind we have adults talking *about* the kid.

It's good to see a student interested in learning these days.