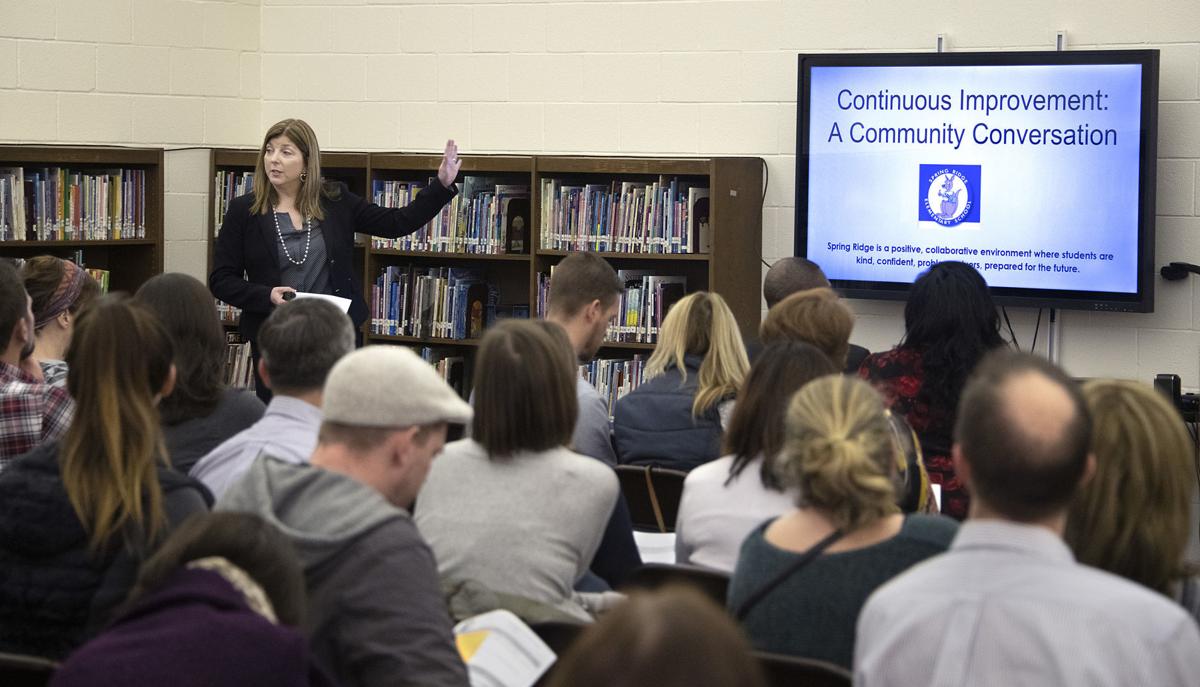 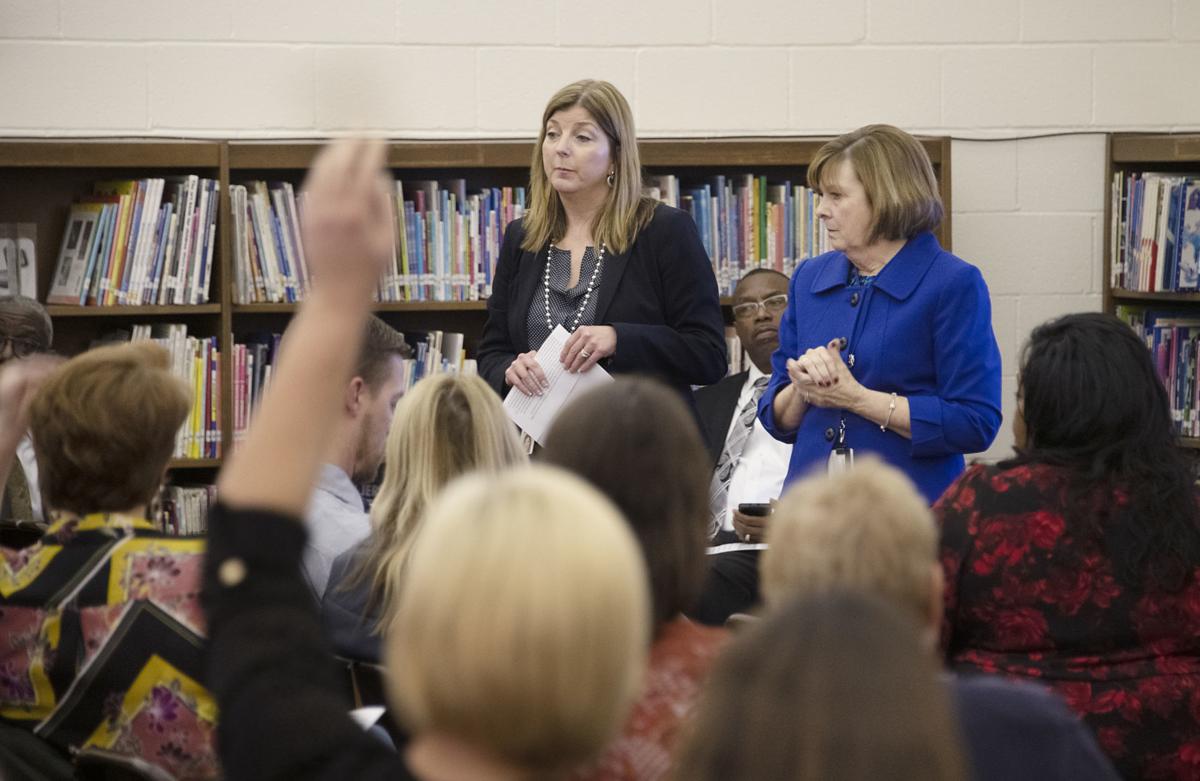 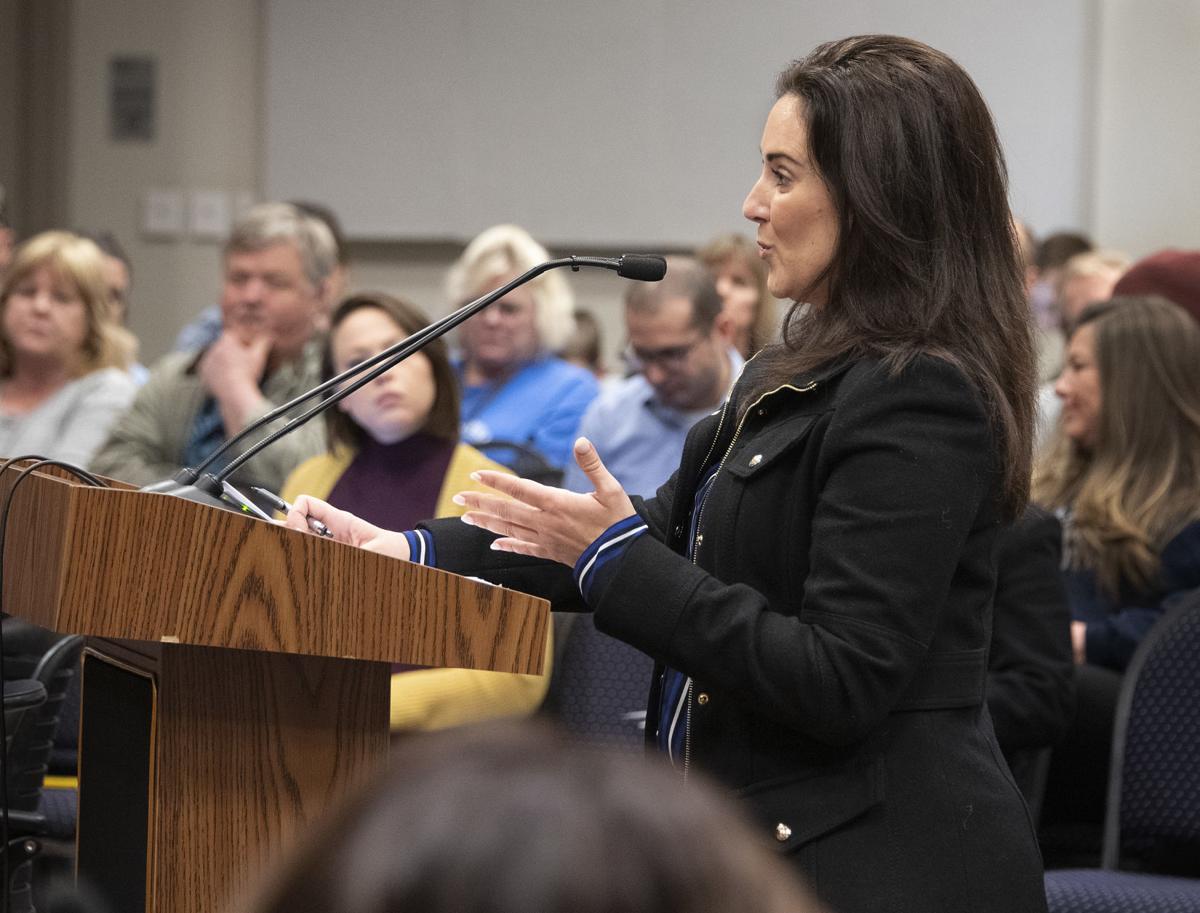 Christina Poole, a parent of a Spring Ridge Elementary School student, brings up security concerns at the school during a Frederick County Board of Education meeting Wednesday evening.

Parents of students at Spring Ridge Elementary School are eager to see if Frederick County Public Schools staff follow through with improved communication and other steps after a recent incident at the school.

An extra principal will be coming to the school to help with the Pyramid Program, which provides support for students with significant social and emotional needs at the school, staff from the FCPS central office told parents at a meeting Wednesday evening.

The school will also have another person with administrative experience to help with the program and how its students mix with the rest of the students, said Kathy Prichard, director of elementary and Title 1 schools in the school system’s Department of System Accountability and School Administration.

Earlier this month, a student broke a number of windows at the school, which led to several classes having to be moved or combined while administrators dealt with the problem, Spring Ridge Principal DeVeda Cooley said Wednesday night.

The officials at Wednesday’s meeting were limited in the amount of information they could provide about the incident, citing student privacy rules.

But Jamie Aliveto, executive director of system accountability and school administration, acknowledged that the broken windows constituted the highest-profile incident of several that have raised concerns about safety and behavior at the school.

The need to focus on special behavioral needs is a countywide one, Aliveto said.

The school system is working to hire five behavioral support assistants to help with students in the general student body, Prichard said.

She said the system recognizes the impact that children struggling with behavioral issues can have on students who are not.

Prichard, Aliveto and Cooley outlined a number of other steps the school and the county system will take to improve the situation.

At Spring Ridge, that will include a series of roundtable discussions from March through June, including sessions on communication, discipline and safety, and family engagement.

Numerous parents expressed frustration at how the window-smashing incident was communicated.

One woman said her husband got a notification about it, but she did not.

Another mother told the administrators, “I got my information from a 6- and a 7-year-old.”

William Green, who has a first-grader and a fourth-grader at the school, said he got an email from the school system’s Find Out First notification system that there was a student in need of assistance and that first responders were on-site, that some students had been moved to another room, and that teaching had proceeded as normal.

“When I first read that, I was thinking a student must have had an asthma attack and they had to call an ambulance or something along those lines,” Green said. “I didn’t really think that anyone was in trouble, or that my kids were in danger, because the tone of it was very simple.”

At the Board of Education’s meeting Wednesday night, Spring Ridge parent Christina Poole said: “It’s very disheartening as a parent to have to find out information from your child rather than the school administration. ... If there is something going on at our school, the administration needs to tell us as parents.”

Kim Grinberg said: “The lack of information we are being told from staff is disturbing. We want to work together, we really are begging you guys for your help so we can make this a safe environment for our kids.”

After the meeting at the school, Hilary Fallow, whose son is in first grade, said she appreciated the opportunity to talk with administrators, and their interest in addressing concerns.

The meeting was a great first step, she said, and she’s looking forward to seeing what the follow-through will be.

Ashley Gbollie, whose daughter is also in first grade, said she was glad the conversation was happening, after it seemed as if it had been avoided for a while.

“I hear your words, but I’m looking for your actions to see that you’re following through,” she said.

My kids are 28 and 22....,the communication of what happens in the school setting has been ongoing since they attended. Schools want parental support and involvement but fail to provide us with prudent info of what is happening.

Much I believe is our dear Ms, Albans way of wanting to deal with things. Gotta keep it hush hush or FCPSs record will be tarnished.

Why are students that have demonstrated consistent disruptive behavior still in public schools. They are impacting every other student and consuming resources that are far better spent on the remaining student body.

Can someone tell me what happened here? There is such delicate language throughout, but I gather a student broke windows - who, when, how many windows, were other students put in danger, who stopped him/her and where is that student now?

To the best of my knowledge the student will not be returning to sres. The incident occurred a couple of weeks ago. The accurate amount of windows broken has not been confirmed but the most recent count I heard was 18. Yes, other students were in danger but the staff acted appropriately and swiftly. The teachers and staff at sres are doing everything they can to keep our children safe. Leadership needs improvement though. Ask your children everyday how their day was and did anything happen at school today that concerned them. The communication from the administration is lacking and unfortunately you will only get information from your student, even in cases such as this. Hopefully the discussions with the board and with the folks last night at the school will change how and when we receive our information. Let’s think positive even though we haven’t been shown that. Have faith in our community because we are strong and want the best for ALL students.

Public school is failing. This is why I send my children to private school. This stuff does not happen there. No way will I even put my kids in public. No way at all.

Perhaps...many of my friends went to religious private schools and the sexual misconduct at their schools was far worse than my public high school. Parents need to be vigilant and communicate with their children, blind faith in any school is foolish, no matter what sort of school they attend.

You're right. This won't happen at a private school because they would never take on a program such as this. If you are not familiar, this is a description from the FCPS Website: 5) PYRAMID PROGRAM: Serves students with significant ­emotional/behavioral needs, who require intensive special ­education and therapeutic services in a small-group setting. Students have opportunities for inclusion in general education classes with non-disabled peers, as appropriate. Most students also receive special transportation and other related services.

These students deserve an education as well. The teachers who lead these classes have an incredible talent to be able to handle this on a day to day basis. Unfortunately, the Administrator in that school seems to struggle with managing this program.

Private schools are not required to take students with special educational needs and emotional needs.

I think 5 new Administrators, 20 new Teachers, 1 Maintenance guy, & $50M will be a good start to address the issues.

We also learned of the incident from our daughter with absolutely no communication from the Adminstration. Our request for certain programs ran by the Frederick County Health Department to be reinstated at the school have been ignored for 2 years . They help children with emotional issues learn to deal with the their feelings and give them a safe place to express themselves. We have put 6 of our kids thru Spring Ridge Elementary and this is not a new issue. This has been ongoing for over more than 15 years.

It is long past time to figure out how to support public/private partnerships to push in mental health and other resources into the school. IDEA has never been fully funded, private insurance with all its caveats ends up punting habilitative services after age 3 to the school system. There is so much wrong with the system that is tasked with educating every single child in the country, yet is not fully resourced and supported and told they must provide a range of services that are out of the traditional scope.