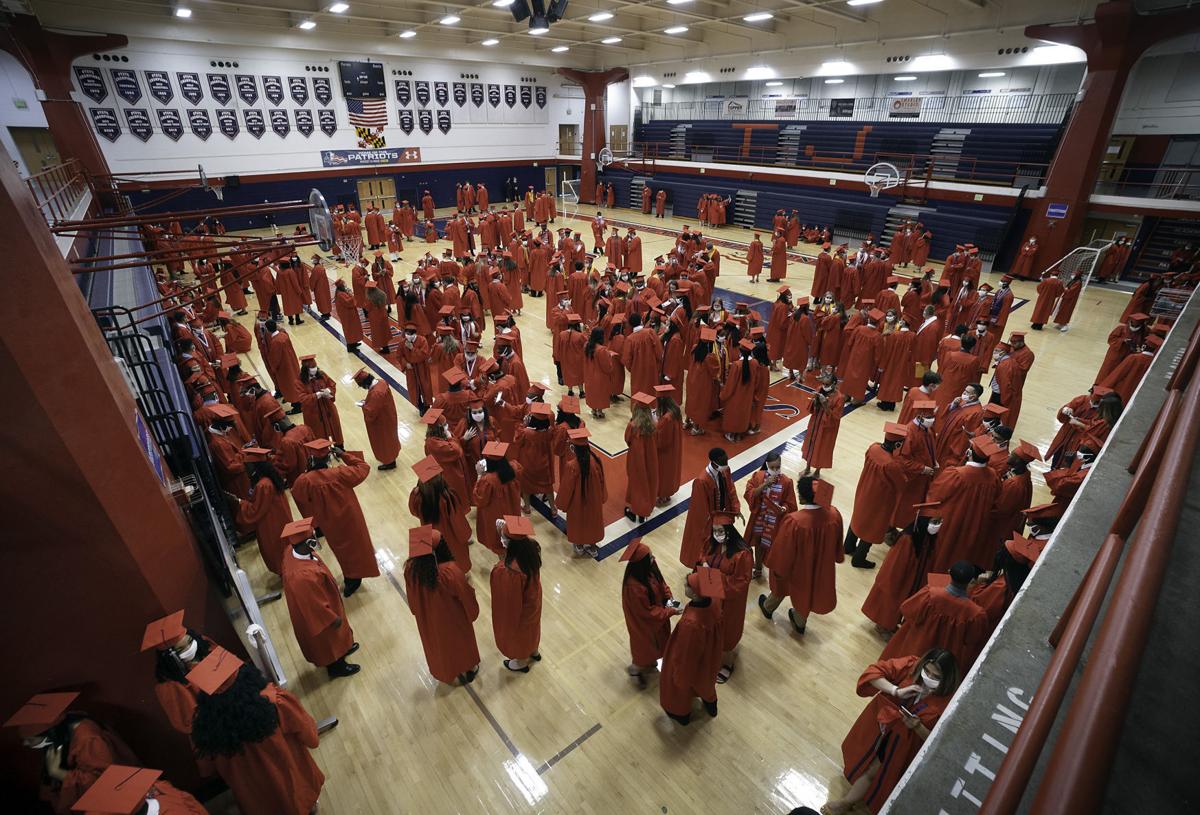 Members of the Class of 2021 at Gov. Thomas Johnson High School gather in the gym at their school before graduation ceremonies Tuesday morning. 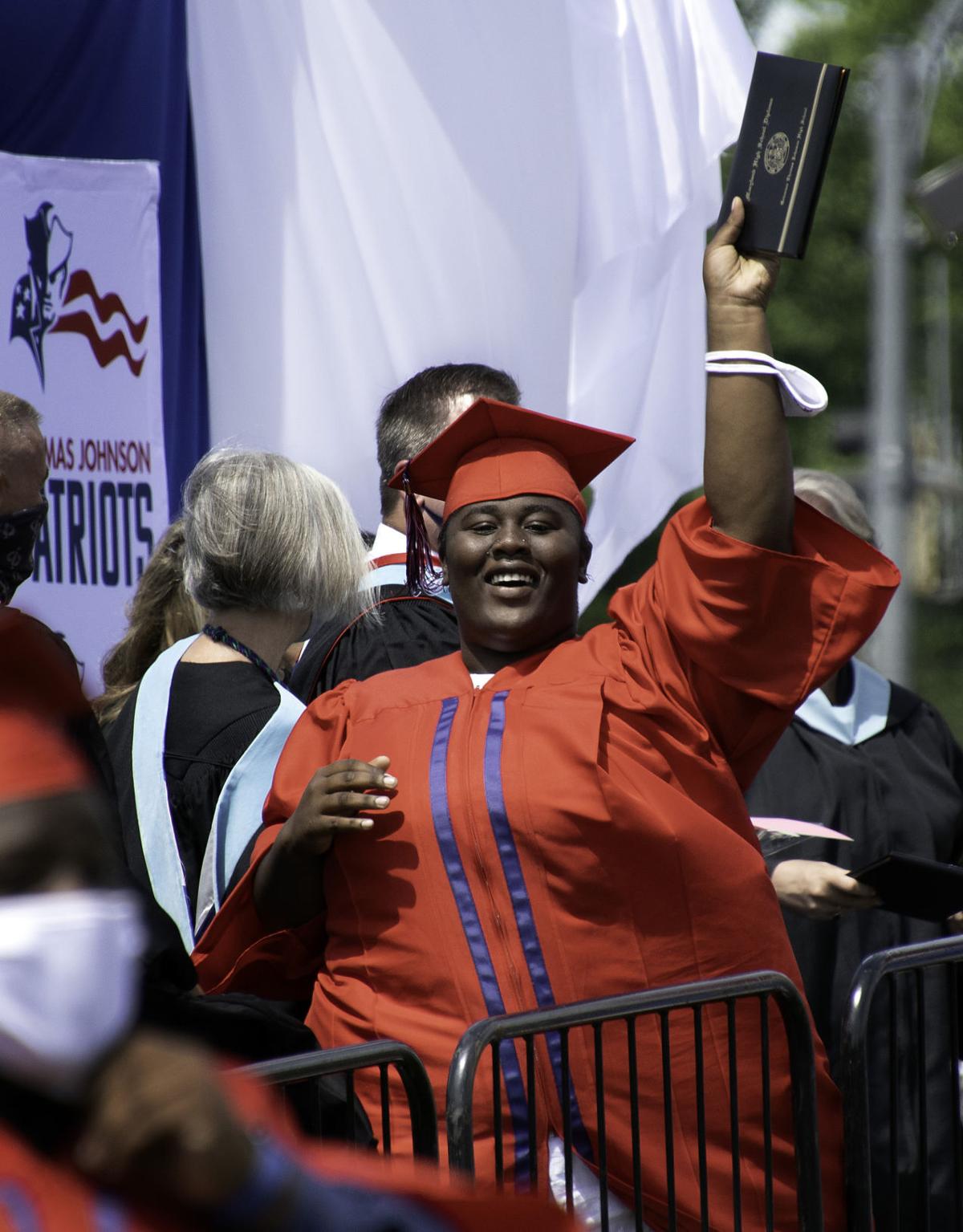 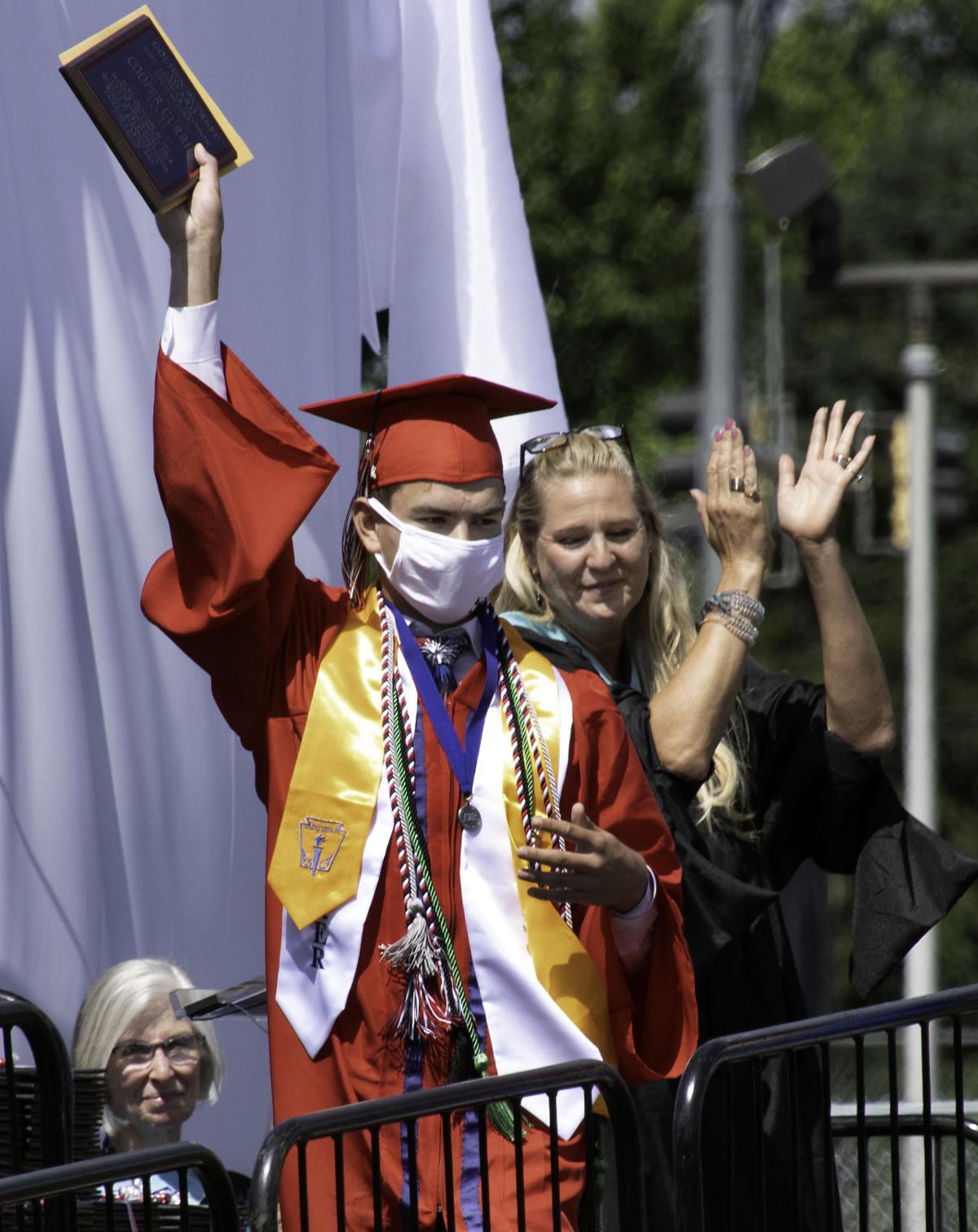 Members of the Class of 2021 at Gov. Thomas Johnson High School gather in the gym at their school before graduation ceremonies Tuesday morning.

Fifteen minutes before showtime, the loudspeaker crackled to life in the halls of Gov. Thomas Johnson High School Tuesday morning.

It was Principal Tracey Kibler with one final message for her graduating seniors, who were lining up around the school in their red caps and gowns.

In her first year as principal at TJ in Frederick, Kibler talked about how much she’d enjoyed getting to know the students she’d met, even as the COVID-19 pandemic kept her from interacting with them as much as she would have liked.

For some seniors who had done all virtual schooling during the pandemic, Tuesday morning and the graduation practices before it marked the first time they’d set foot back in their school since the spring of 2020.

Ally Helm, a virtual student for her senior year, said she’d been in the building a few times for various clubs that she was in, but it meant a lot to be back Tuesday with all of her friends in the senior class.

At the beginning of the year, they didn’t know if they would have an in-person graduation ceremony, she said.

Seniors only found out about a month ago that they would get a ceremony after seeing last year’s class miss out on being together one last time, said Bobbi Jean Bickerton.

A hybrid student who did a mix of in-person and virtual classes this year once students were allowed to return to school, Bickerton said she thought Tuesday was something that the Class of 2021 needed.

It was weird to see how everyone had changed after a year of virtual classes, whether growing physically or otherwise, said Chris Scire as he waited with a row of classmates.

Between not having to wear a mask and already being home once his work was done, Scire said he actually enjoyed virtual school.

At the ceremony, the toll of the pandemic was a regular topic for speakers.

“We were strong and persistent, so we made it through the storm,” Jule Powe told her classmates as she welcomed them into the football stadium behind the school.

Sometimes the process took them in strange directions.

“We researched, toured and applied to colleges from the four walls of our bedrooms,” said Stephanie Parker, the class’s featured speaker.

Principal Kibler summed up the feeling in her formal remarks to the graduates.

“What an opportunity to come together after such a long season of being apart,” she said.

Senior Taj Gulati felt like the in-person ceremony would help mark an end to the pain and grief that the pandemic had caused.

“It’s ending high school with a bang rather than letting it fizzle out,” Gulati said.

A rather unfortunate title to this article, on a number of levels. Think about it. [And, please don't attack this reporter personally. The recent bile directed at reporters in the comments section has been juvenile and inappropriate. ]