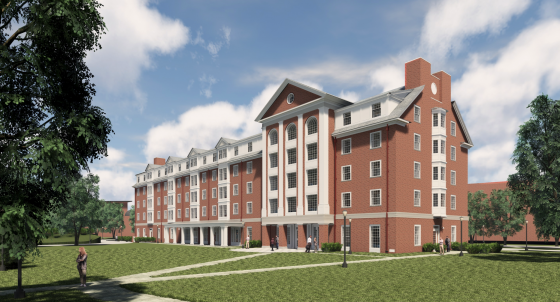 Hood College’s planned new residence hall will feature five stories and 201 beds. Construction will begin once the Marx Center currently on the site is demolished. 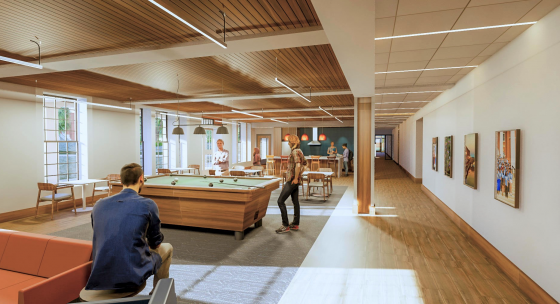 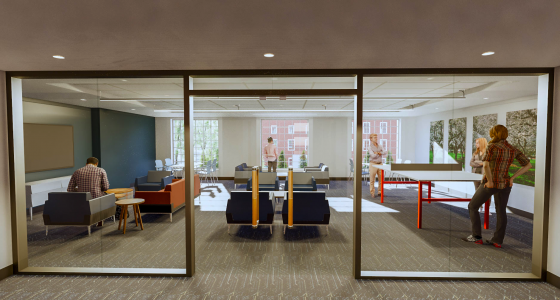 Hood College’s planned new residence hall will feature five stories and 201 beds. Construction will begin once the Marx Center currently on the site is demolished.

The plan to build a new residence hall at Hood College was approved Monday by the city’s Planning Commission as college administrators announced their intent to cut down on commuters.

The college’s final site plan to build a five-story, 62,724-square-foot residence hall on the northeastern part of campus was up for approval before the commission with a favorable recommendation from city staff. The building, which will provide 201 beds, will be built on the 2.46-acre space currently occupied by the Marx Center at 541 Coffman Chapel Drive, which the college previously applied for and received a certificate to demolish without further delay in October, according to a report compiled by city staff.

After a brief review of the plan by City Planner Sherry Kelly, architect Sean Lyons and Charles Mann, the college’s vice president for finance and treasurer, took the podium to address the three commissioners present. Both men emphasized the importance of the new hall in advancing the private college’s plans.

“The project is a key part of the college’s master plan as noted,” Lyons said. “The goal is to create a more residential campus, and part of that is the college will be requiring students to have a three-year residency as part of [the plan] implemented with this project and the goal and outcome as noted is to reduce commuter parking and create more of a pedestrian campus.”

Prior to the fall class of 2018, undergraduate students were required to live on campus for only two years, Mann said when reached for comment after Monday’s hearing. Undergraduates who live with their parents and fall within a certain distance from the school will still be allowed to commute, but Mann cited studies that indicate students who live on campus generally perform better.

“All the data indicates that the longer a student resides on campus, the better academically they perform in general, they have a better rate of graduating on time and we retain them better because they can develop better support systems,” Mann said.

The college’s move to require more students to live on campus was also mentioned in the college’s request for a modification of the city’s land management code in regards to parking standards for colleges with on-campus housing. Under the land management code, the college would be required to provide a minimum of 314 more parking spaces based on the building size alone, but the college and architects argued that the additional parking would detract from the “parklike atmosphere” of the campus.

Commissioner Joan Strawson asked for a rundown of where students currently park and how the new residence hall might change that, Mann took to the podium to explain that new parking would not be needed because the new building was on the northern end of campus, where parking is abundant.

“Typically where we have more parking issues is more toward the south side of campus where the academic buildings are. Up towards the residential part of the campus and towards Seventh Street, we have significantly available parking up there. ... This new residence hall will be up in that area where there is more residential parking available,” Mann said.

Mann also pointed out that, even if students who move into the new hall bring their cars to campus, they will likely park closer to the hall on the north part of campus.

Having secured final site plan approval, the college hopes to demolish the Marx Center later this month or in May, then begin construction in June, Mann said. Construction was expected to take 13 months, meaning the new hall will be ready to receive incoming students in for the fall semester of 2020 in August.

The total project will cost $25 million, including $20 million in construction fees that the college plans to fund through debt, Mann said, explaining that another benefit of moving to a three-year residency plan will be the increased revenue the college will receive in room and board fees.

“We’re borrowing the money for the $20 million part of [the project], so our projections are the room and board revenue that we get at least in the first couple of years will at least cover the rest of our debt,” Mann said. “And as time goes on we will make some money off of it.”

The college was also approved for a modification requested under the landscaping section of the city’s land management code, as well as a modification under the code’s forest conservation section.

Once it is completed, the new residence hall will offer an additional 201 beds with a combination of suites and semi-suites in the five-story building. Semi-suites include two bedrooms — typically home to two students each — and a shared bathroom, while suites add a small living space to the shared bathroom area between the two rooms.

The first floor of the new residence hall will feature a kitchen and eating area for students, a lounge space, a balcony and office space for the college's Honors Program.

This is great news for all students because investing in education is the way to develop a country. For students, I recommend a website https://sky-writer.com/aceyourpaper-review/ where you can find true customer testimonials about carved essay writing services.

Sounds like they re treating commuter students as second-rate. I'm a Hood grad and I don't like their new emphasis on being residential based.

It's always been a residential college. All they're really doing is crating more housing in Frederick. Lord knows we have a shortage of affordable housing here. better then students trying to commute in the winter from hagerstown. most colleges require students to live on campus.

Admin has a hard time keeping students. 60 left last semester and no doubt more to come. President gets free housing buys herself lakefront property in vt? But students forced to stay for 3 years. Faculty still starve.

Who in their right mind would go to Hood knowing that they'll more than likely be drowning in student debt for the rest of their lives? And I'm saying that as a Hood graduate who was lucky enough to have a good scholarship and parents who shared the cost of attending, and I STILL graduated with $35k in student loans.

The cost of attending even a public college is completely out of control, and in 20 years will be crushing the economy when college-educated citizens are too burdened by debt to qualify for mortgages. But it's a slow-burning fire that won't be dealt with until it's already blossomed into an inferno that utterly wrecks us.

Well said! I think it's a shame that the college is shifting away from commuters. Most Hood graduates that I know have been commuter students. They had a hard enough time paying tuition without tacking on the extra cost of room and board.

This grad. The sticker price when I was there would round to $35,000. I paid $10,000. I’v found (loans long since repaid) that the cost was more than worth it. My masters degree, also art Hood, FREE via local businesses. So, best estimate, I earned $120,000 at least in sholarship aid. They brought me to Frederick from a high school overseas. They are the reason some people like me end up here; I donate every year to their fund. Are you upset because you didn’t t get hte chance to go to Hood? Many of my FCPS kids are there now, and most on scholarship.