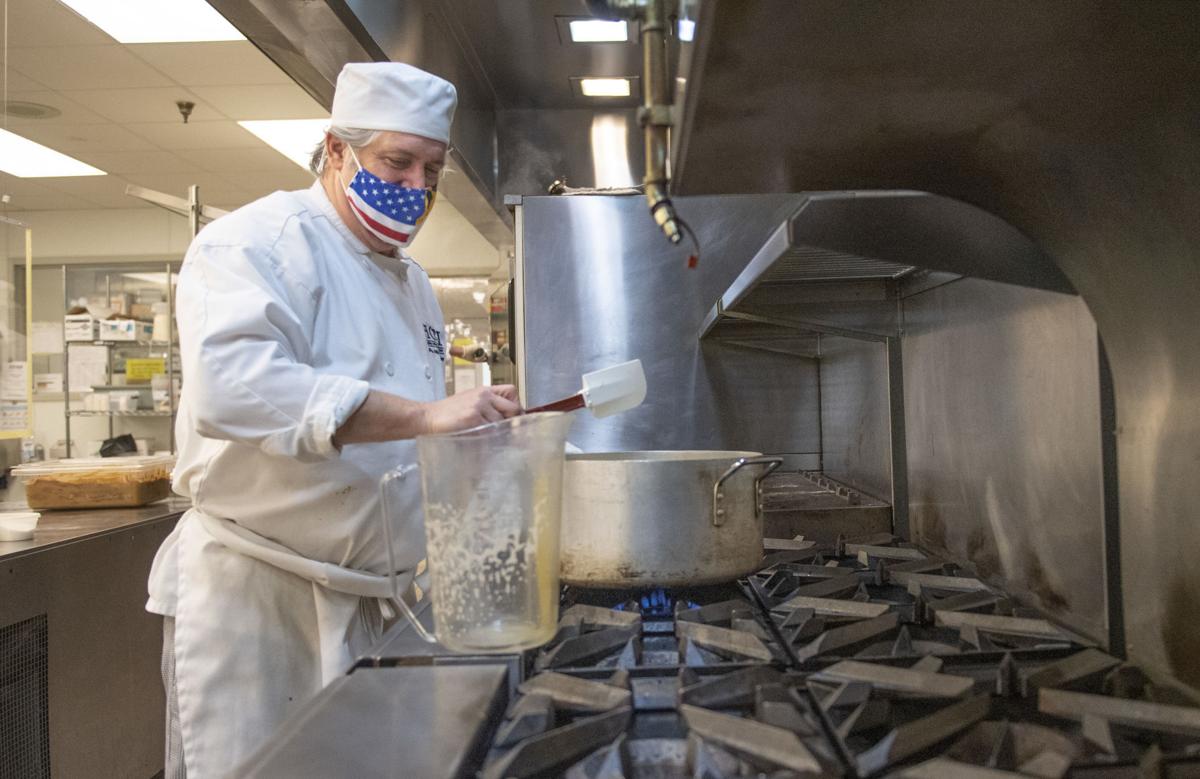 FCC culinary students Dave Rolls prepares a soup inside the school’s Monroe Avenue facility as he and fellow students prepare meals to be donated to Frederick Health Hospital and the Frederick Community Action Agency. 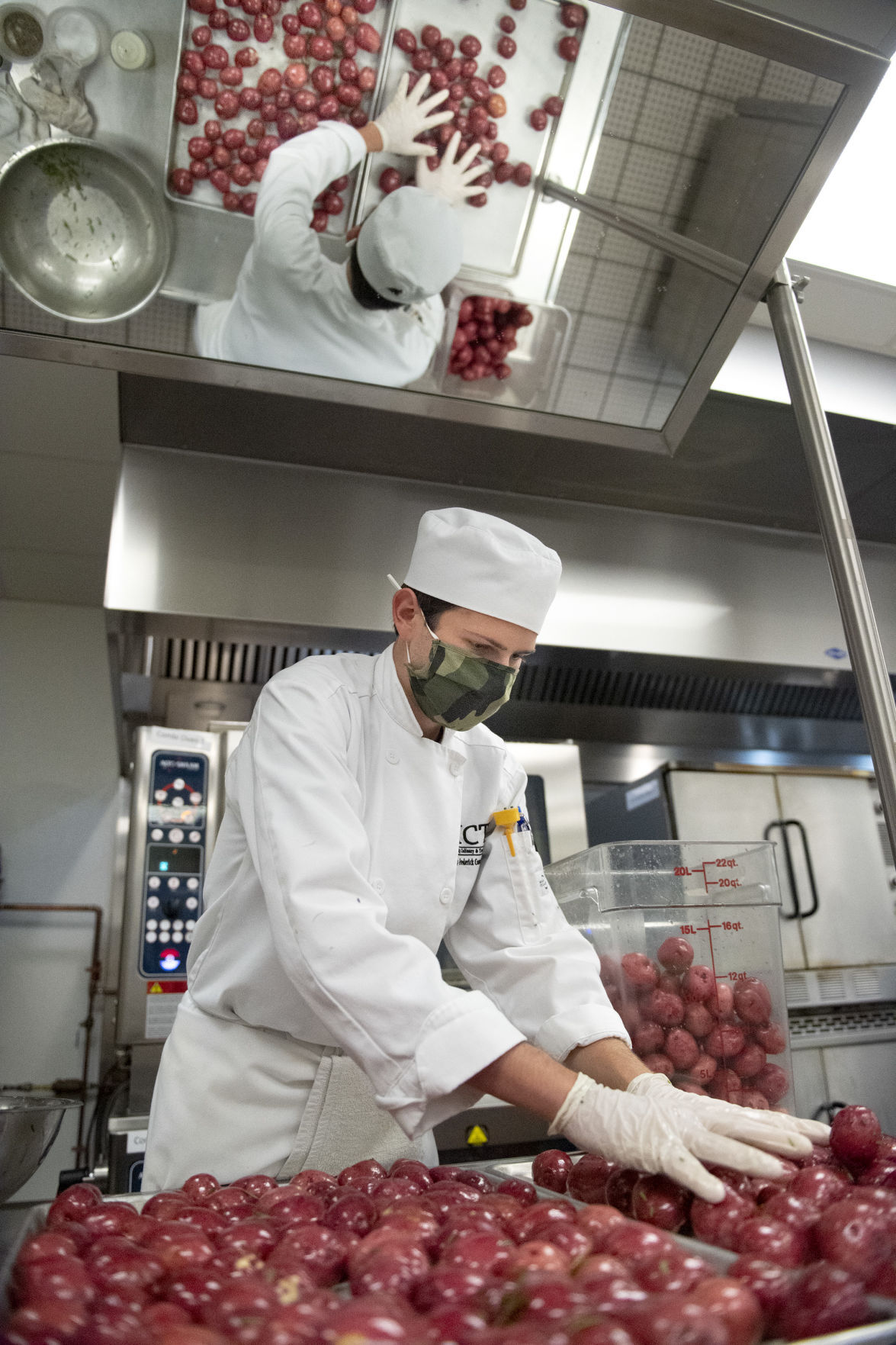 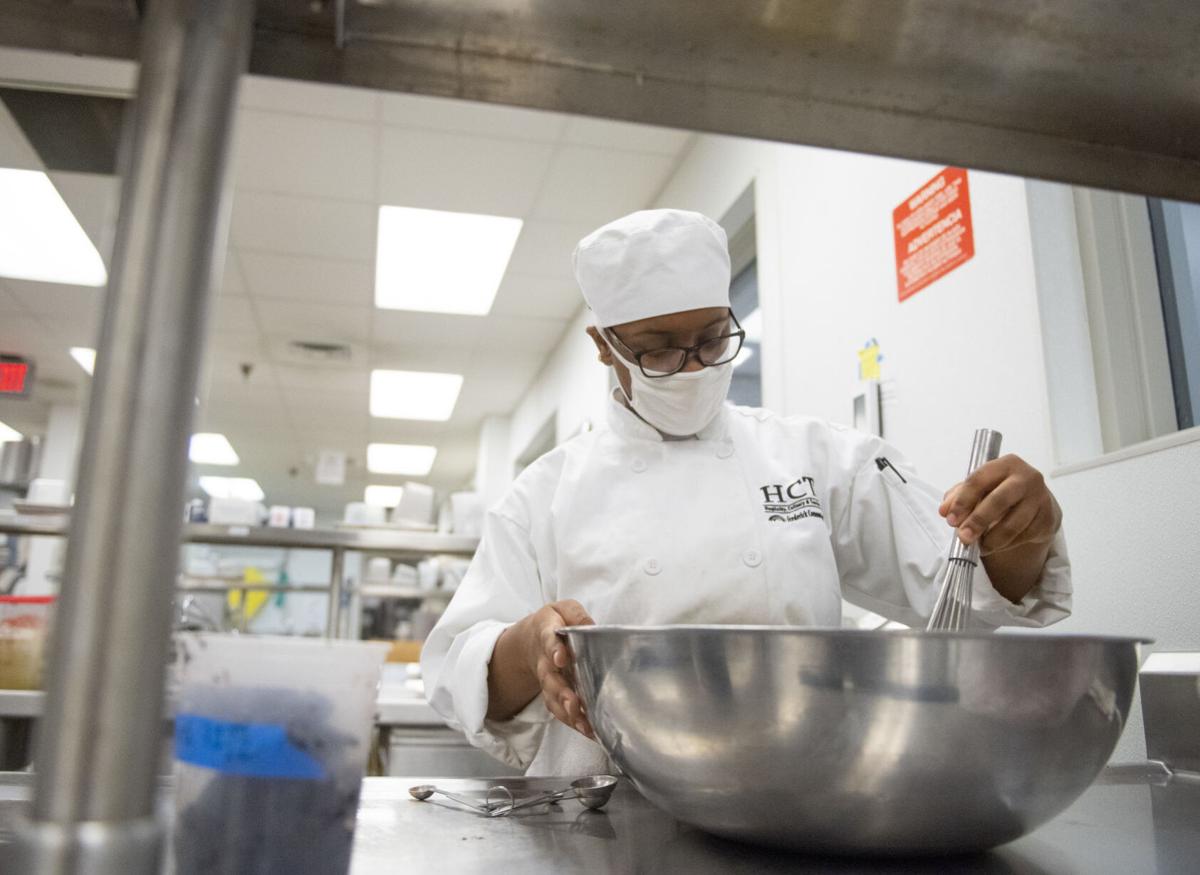 FCC culinary students Dave Rolls prepares a soup inside the school’s Monroe Avenue facility as he and fellow students prepare meals to be donated to Frederick Health Hospital and the Frederick Community Action Agency.

The restaurant industry may be struggling, but one Frederick eatery has decided to give back during an otherwise difficult time.

Students of Frederick Community College’s Hospitality, Culinary, and Tourism Institute (HCTI), who run the well-known 200 Monroe restaurant, decided to spend their last week of dinner service for the semester preparing meals for health care workers and those in need.

Sixty meals were donated last week week to the Frederick Community Action Agency and another 60 to Frederick Health Hospital.

“With so much in the news about food insecurity and so many people being impacted by the COVID crisis, being out of work, and how hard our health care workers are working around the clock, we thought what a great way for the students to give back to the community using their talents and skills,” said Elizabeth DeRose, HCTI manager.

200 Monroe is a capstone experience for HCTI students where they are able to put their learned skills to work and deliver a high-quality dining service to community members.

Under normal circumstances, the restaurant is open once a week, and diners can enjoy gourmet meals for one flat price.

This semester, due to the pandemic, the restaurant had to switch to carry-out only, DeRose said. It was a challenging scenario to tackle.

“In a completely to-go scenario, we really had to adapt very quickly from engineering a menu that can be executed with students six feet apart and not crossing each other to a new sales and ordering system and then getting the word out,” she said.

The meals featured on the menu had to be simple enough to be prepared by one student at one station. Regardless of the change, the offered dishes still managed to hold on to the gourmet style of 200 Monroe. This semester’s menu featured, among others, a stuffed Swiss chard, four-cheese cannelloni with focaccia and marinara sauce, an herb-roasted chicken with potatoes and roasted vegetable slaw and a roasted flank steak with potatoes and glazed carrots.

Because students had to remain six feet apart and could not flurry around the kitchen as in a normal dining scenario, the production time was longer, DeRose said.

Despite the challenges, the restaurant succeeded, producing a greater volume of meals than in previous years.

DeRose attributed it to the decrease in price and some of the flexibilities that came with carry-out. Meals could be ordered for one person, and there was no lag experienced with the usual turnover of tables.

The students also rose to the challenge. DeRose said that at the start of the semester, orders for meals had to be given 48 hours in advance. But the students learned quickly, and by the end, DeRose was allowing orders up to one hour in advance.

“Every week they got faster and more competent, and every week I upped the reservations,” she said.

Allison Davis, a second-year student who worked on the front-of-house team managing orders, running meals out to cars and preparing drinks, said the new operation of the restaurant was beneficial. There was a greater sense of camaraderie among the team, she said, and it gave them a very real-life understanding of the business.

“The key traits that you need in this business to be successful, they have had to learn and demonstrate, which is resilience, adaptability, thinking quick on your feet, problem-solving [and] communicating,” DeRose said.

Students also seem to have gained a sense of gratitude.

Davis said she was excited to donate meals to frontline hospital workers because she knows how much they have been struggling. It’s a different struggle than the restaurant industry, but there is a “mutual respect,” she said.

Chris Stitz, a second-year student chef at 200 Monroe, said it’s important to remember the community collaboration aspect of the project.

“You may be struggling, but there are also others struggling, you’re not alone in the situation,” he said. “And if anyone from the restaurant industry got sick, [health care workers] would be there helping with whatever you needed. So, it’s good to know that they’re always there for you and to give them something in return.”

Such a wonderful opportunity for these students!