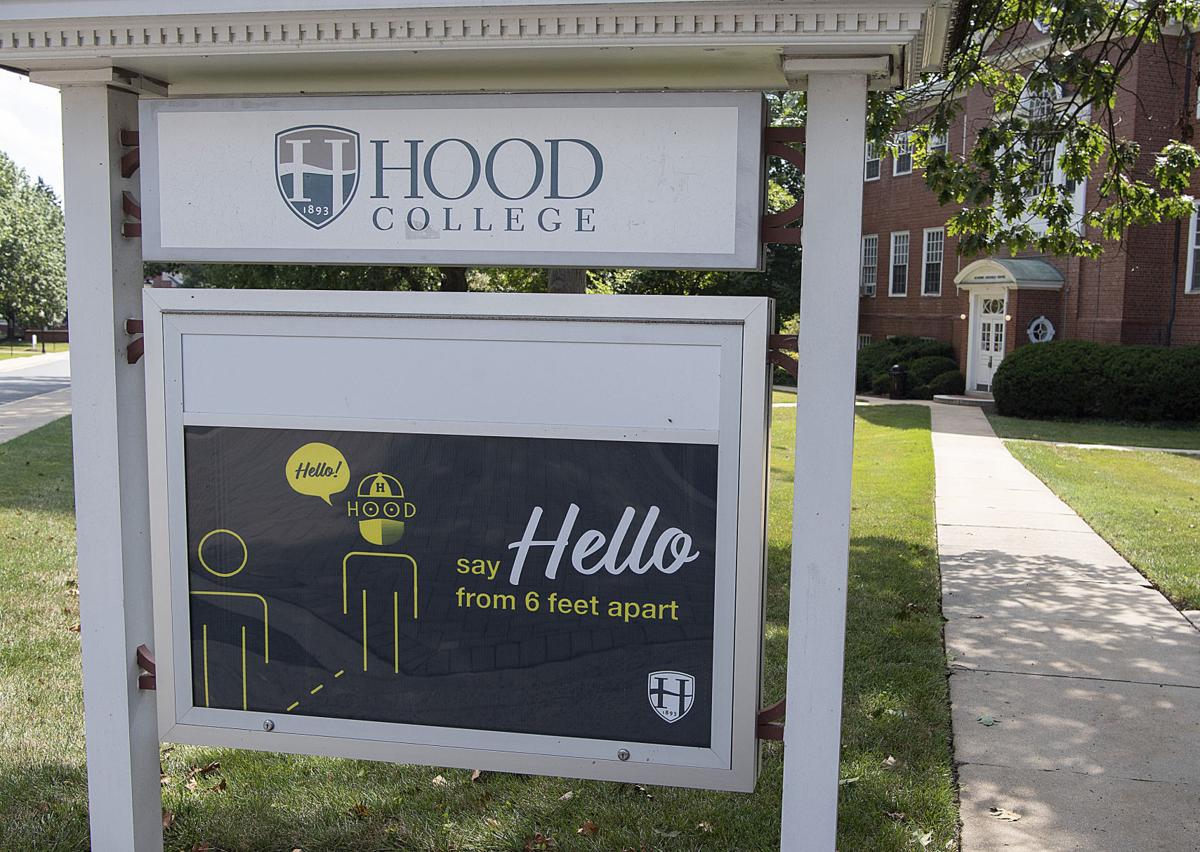 In this August photo, signage around the Hood College campus is shown, reminding students to be vigilant against COVID-19. 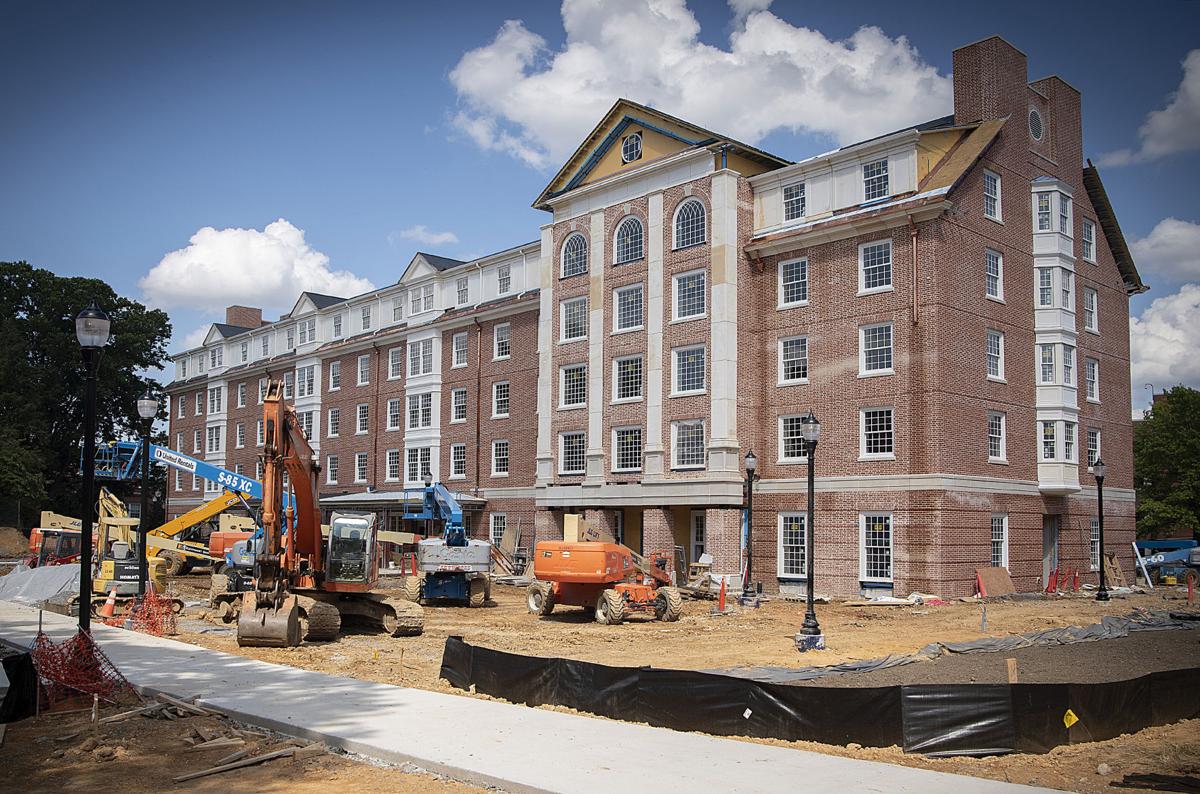 A new Hood College dorm is expected to open in mid August. Students will be required to adhere to strict regulations including no visitors into dorms. Signage has been placed around the Hood College Campus reminding arriving students to protect themselves from the spread of COVID-19.

In this August photo, signage around the Hood College campus is shown, reminding students to be vigilant against COVID-19.

A new Hood College dorm is expected to open in mid August. Students will be required to adhere to strict regulations including no visitors into dorms. Signage has been placed around the Hood College Campus reminding arriving students to protect themselves from the spread of COVID-19.

As the start of the fall semester for many educational institutions creeps closer, many colleges and universities are making final decisions on whether or not they will bring students to campus.

The thought of large groups of students living in one building together in small spaces can be concerning, given the health risks associated with COVID-19. Some schools, to minimize risk, have decided to keep their campus closed with classes held online.

Some are opening at full capacity and allowing students to move into residence halls with almost no restrictions in place.

In Frederick County, Hood College, and Mount St. Mary’s University, have both decided to allow students to live on campus under configured rules and layouts.

Both schools normally have the on-campus living capacity for a majority of enrolled students, with traditional double or triple occupancy dorm rooms as well as suites or apartment-style housing.

This year, neither school will allow more than two students to live together and many rooms have been made single occupancy.

Despite these configurations, both schools will still be able to house many students, and Mount St. Mary’s has worked to acquire a few off-campus accommodations in Emmitsburg and Gettysburg, said Jamie Brown, Associate Director of Residence Life for the Mount.

Additionally, since a large portion of both school’s student populations is originally from Maryland or the surrounding area, many students may either be simply commuting from or living at home.

For those choosing to live on campus, both schools will have restrictions in place to keep students safe.

Masks will be required to be worn in all public spaces including common rooms in the residence halls. Shared bathrooms will be accessible to a certain number of students at staggered times and will be cleaned throughout the day.

At the Mount, furniture in the dorm rooms has been rearranged to make sure students maintain six feet of distance. Students will be able to visit each other’s rooms but there will be an occupancy limit based on the square footage of each room and masks will be required.

“Initially we said we should not have external guests at all but we want to create some sort of guideline to enable the experience of living on campus,” Brown said. “We don’t want to completely restrict movement...and have students just go to class and be by themselves in their rooms.”

When asked how the university will make sure students adhere to guidelines, Brown said a lot of it will depend on student’s self-responsibility.

“The big piece of it really is the personal responsibility. Making sure that they take the Mount safety pledge seriously,” she said.

Olivia White, vice president of Student Life and Dean of Students at Hood, where the rules are a little more stringent than the Mount, had the same message.

“Hood has a strong honor system and we have also put together a pledge for everyone to be respectful of those things that have been outlines and all of the protocols related to COVID,” White said. “We also have sanctions for folks who are not in compliance.”

At Hood, students will not be allowed to visit each other’s residence hall buildings or rooms and beds in double occupancy rooms will be set up in alternating directions to make sure students aren’t facing each other when sleeping, said Laurie Ward, vice president for marketing and communications for Hood.

“We are encouraging roommates to wear their masks for the first two weeks to make sure that neither one is sick, although all residential students will be tested when they arrive on campus,” Ward said.

The college also plans to give out digital thermometers to each student and will be deploying their own version of the “#Campus Clear” app – a mobile COVID-19 self-screener through which students will complete daily health checks and monitor their symptoms.

If students at either school test positive for the virus, they will either be sent home or to an off-campus isolation room which they will quarantine in.

In these isolation rooms, students will be able to continue taking classes online and will have many campus resources still available to them.

“We also have a team of volunteers [at Hood] who will be supporting students while they are either quarantined or isolated. This team will help with the delivery of meals and will take care of some things like laundry or other things that the student may need,” White said.

Roommates will also likely be quarantined and both schools will be conduct tracing if a student contracts the virus.

Both schools have also configured their academic calendars to minimize breaks and the possibility of students traveling off-campus.

Mount St. Mary’s plans to begin two weeks early and Hood will begin one week early. Neither school will have a Fall Break and students will be sent home right before the Thanksgiving holiday. They will take final exams at home and will not return to campus until the start of the second semester in January.

“We’re hopeful for a safe semester. We haven’t done this before,” Brown said. “Students want to come back...and we are confident with the measures that we created to keep students safe.”

Mount St. Mary’s University in Emmitsburg is currently seeing the highest number of “active” COVID-19 cases on campus since the start of the s…

They are trying to be as g as possible, still if it was my child, I don't think I would want them to go this year.

I agree, and I actually have a daughter who moved out last week for a mix of online and on campus classes plus a practicum experience in schools (supposedly). But she is 24 with a Masters in Psych and this is the next step in her career. Off she went.

Depending on your school, you may not have much of a choice other than not going.