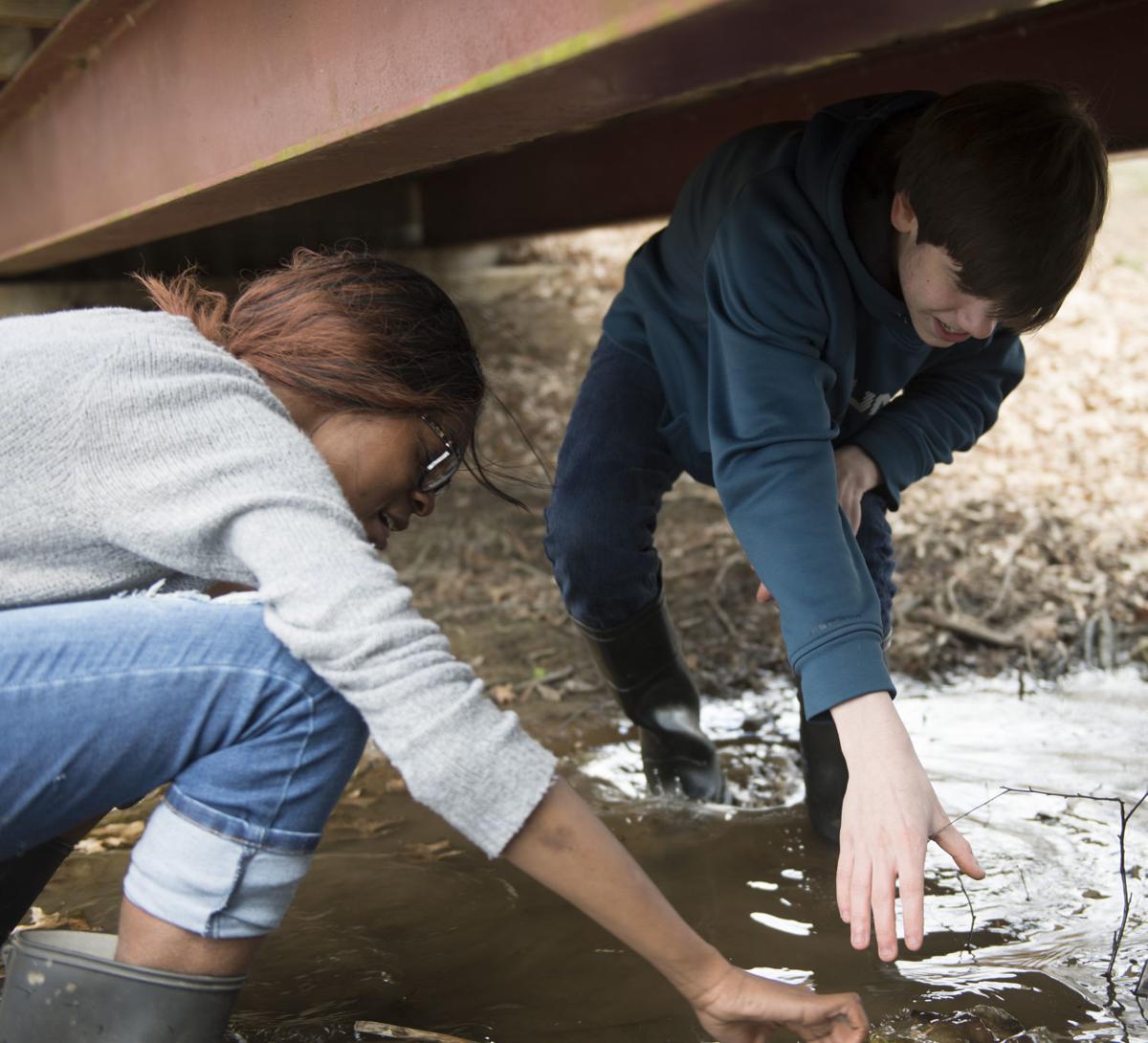 Walkersville High School environmental science students Lydia Mayenge and Cory Abrecht anchor a sensor in a creek running through Walkersville Community Park on Wednesday as part of a study with Hood College. 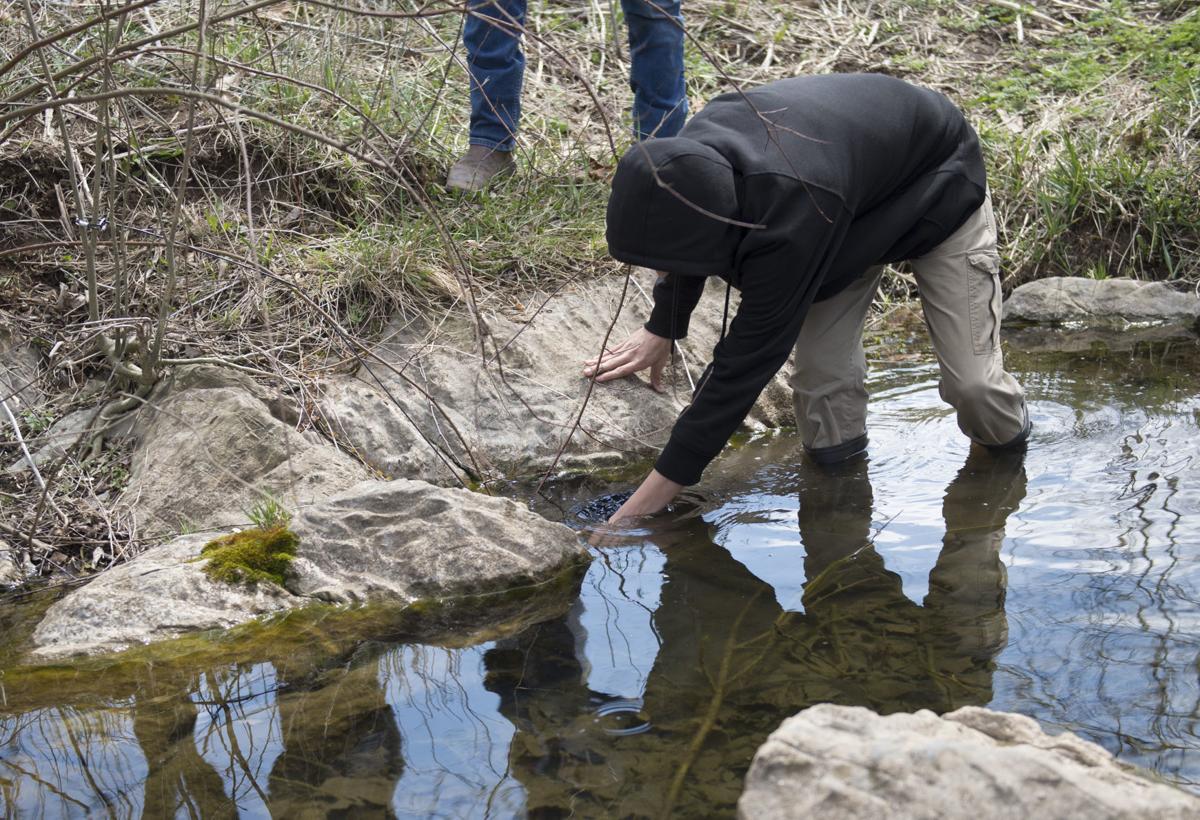 Walkersville High School student Eddie Rudegeair places a sensor in a creek as part of a four-week experiment to collect air and water temperature data.

Walkersville High School environmental science students Lydia Mayenge and Cory Abrecht anchor a sensor in a creek running through Walkersville Community Park on Wednesday as part of a study with Hood College.

Walkersville High School student Eddie Rudegeair places a sensor in a creek as part of a four-week experiment to collect air and water temperature data.

Not every high school student would rank the final period of the day among their favorite class times, but for Sue Faibisch’s environmental science students, the end of the day is about to push them to think outside the classroom.

Through the back door, across a field and over a set of rusting railroad tracks is their new learning space — a creek and sparse woods, which over time will show just how much their brick-and-mortar school is affecting the local environment.

With the help of the Center for Coastal and Watershed Studies at Hood College, the class is undertaking a four-week experiment to collect air and water temperature data, which will be combined with two semesters’ and one summer’s worth of information to see if and when the blacktop surfaces at Walkersville High School affect a nearby stream.

“Before, I was like, ‘Water. We have an abundance of it. Water is always there,’ but it’s always changing,” said Lydia Mayenge, 15, a sophomore in the class.

She pulled on black rubber boots that went up past her calves to wade out into Glade Creek, as her classmate Cory Abrecht, 15, began tethering a special device that will collect the class’s data to a support beam of the footbridge overhead. The class needed to be able to retrieve the little gray box housing the device in four weeks in order to download the data, and they couldn’t risk it washing away during the next rain.

The device, known as a “temperature logger,” was designed specifically for the experiment by Hood College’s computer science department and assembled by students in Foundations of Technology, who were in charge of deploying a dozen more of these devices around the school’s property.

The devices have been strategically placed to measure the water coming off hard surfaces such as roofs, parking lots and the track on the school’s property, said Susan Simonson, who works for Hood College and was critical in getting the grant to start the experiment 1½ years ago.

The three-year experiment is being financed by the National Oceanic and Atmospheric Administration’s Bay-Watershed Education and Training Program, which awarded Hood College $214,000 to help high school students study the impact of urban environments on local streams. The project started at Walkersville last spring and recently expanded to Oakdale High School as well.

Part of the experiment is to look for evidence of a phenomenon known as the “urban heat island effect,” which is when areas — such as the center of a city — are warmer and stay warmer after dark due to an abundance of hard surfaces. Water coming off these areas after rain events can be very hot and disturb nearby waterways and aquatic habitats.

Hence why Cory and Lydia found themselves ankle deep in Glade Creek at 1:30 in the afternoon.

“I knew we’d be out here deploying,” Cory said after the temperature logger had been secured. “I didn’t know we’d be doing it under the bridge.”

This is the first big, long-term experiment Cory could remember completing in school. Unlike other sections of the school system’s curriculum where students critically examine a problem on paper, in this project, the students would repeatedly make the journey outside to analyze a problem in real time.

“I thought it sounded interesting, because I heard we got to go outside a lot,” said Jordan Tablah, 17, a junior in the environmental science course.

Jordan admitted, as he watched his peers from the footbridge, that he hadn’t given much thought to how hard surfaces could affect the surrounding environment, or how little of the world’s water was fresh water, before this class, he said.

Part of the beauty of the experiment is to let students reach moments of deeper understanding, said Faibisch, who teaches the course.

“They get to go out and see real science rather than modeling science,” Faibisch said.

And with each semester the experiment continues, the students have more data to compare, analyze and draw conclusions from, she said.

“Field experiments tend to be more real and have an impact,” Faibisch said. “That’s what kids remember.”

Just a few days into the water curriculum, some of the big-picture ideas were already starting to come into focus. Students expressed a new understanding that clean, fresh water wasn’t guaranteed, that human actions could have environmental consequences, and some of them even admitted they “don’t know” if the school has changed the health of the nearby stream — a question that couldn’t be plugged into Google for a simple answer.

“It’s important for us to understand water now, rather than later, when we don’t have resources,” Lydia said.

Walkersville High School students are taking science class outside in 2017.

The different student is doing the working about the experiment about water. The student is really focusing on uk best essay service to try to complete the research of water project. Water is basis need of entire human and also don't waste the water.

52. Spend some money at the nearby outlets